when it's time to change, you've gotta rearrange

it's hard to believe that the bean has been taking dance lessons for almost two years now.  seems like just yesterday when she put on that leotard that was still so big on her and headed off to her first tap/ballet class. 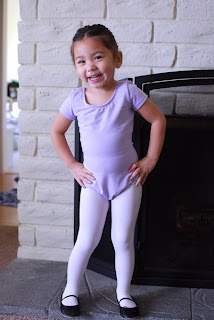 while it's been awesome to watch her learn the basics and twirl and dance around and stuff, the other benefit to these lessons has been meeting new people - for both of us.  she got pretty tight with a few of the girls in her class, and in turn, i found three fabulous friends in their mothers.  we've been through the trenches together - remember this? 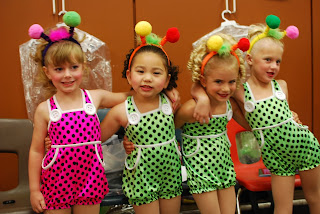 and then they all came to the bean's birthday party last year, too (along with my friend champagna's daughter).  i didn't get to catch all of them together, so just pretend you see all four of them here. 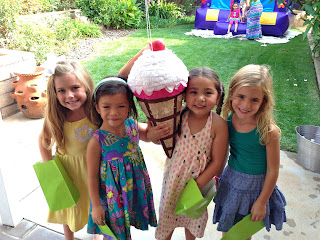 the ladies even helped me during the party, when i was frazzled and couldn't seem to pull it together.  i was so grateful for their help. 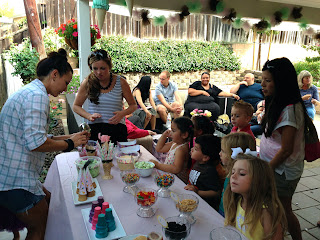 admittedly, the fun part for me when it comes to taking the bean to dance classes is having that hour of hanging out with my friends.  i'm kind of an unlikely addition to the group, though - there's rocky (so named for the incredible ring she wears), who's tall, slim and gorgeous beyond belief.  and there's sassy, who's always so stylishly put-together and cheerful.  let's not forget blondie, who has endless patience and the sweetest personality.  and then you have me - frumpy, clumsy, and likely a decade older than them all.  heh.

there have been so many crazy schedule changes for the dance classes in the last few months.  then you add the holidays in the mix and it was just a nightmare trying to keep our normal routine.  and i was bummed when blondie's daughter had to drop out of tap/ballet for a number of reasons.  but rocky and sassy and i managed to get our schedules coordinated enough to put the girls into a tuesday class that worked for all of us.

it was during our first tuesday class that the shit hit the fan.  when the kids came out to switch from tap shoes into ballet slippers, the teacher - who's also the owner of the studio - decided it was a great time to inform rocky and sassy that their girls were having trouble keeping up.  she kept hammering the point of the annual recital and how they absolutely had to catch up or be in danger of not being able to participate.

the recital?  IT'S NOT UNTIL JUNE.

it was so incredibly awkward and uncomfortable as she stood there and basically berated the girls and their mothers for falling behind and holding the class back.  didn't matter that part of the problem was that she kept moving the days and times for our class around, which interfered with rocky jr.'s soccer practices.  and because the holidays are always nuts, sassy jr. had taken the month of december off.  not to mention that the studio was closed for half the month anyway.  and, um...they're FIVE.

the worst part of this was that she unloaded all of this information at full volume, within earshot of pretty much everyone in the studio at the time, and the girls were sitting right there on the floor changing their shoes.  she pointed at them as she spoke, and spewed her venom while the kids watched with wide eyes and heard every word.  it was awful.

when she swept back into the classroom and shut the door to resume the class, we stood there in a shocked silence for a few seconds.  although she hadn't singled the bean out, i was reeling from the way she had chosen to handle things.  and i could tell that rocky and sassy were furious - well, duh.  after class, sassy caught her by the door and politely told her that she didn't appreciate what had transpired.  i didn't hear what was said, but i saw how the owner looked at her, nodded brusquely, and brushed her off.

i've actually been leery of the owner for quite some time.  she was the bean's very first instructor, and even as she was surrounded by 3 and 4 year olds, she was always harsh and rather mean.  i was so grateful when she assigned a different teacher to the class.  but now that she's once again teaching my kid's class...well, enough is enough.  and it's not even like we can complain or anything, because she owns the damn place.  ugh.

and then later on, i found out that she made the receptionist call sassy and tell her that sassy jr. was no longer allowed to continue in her class.  jigga-wha??  sassy and rocky and i were texting back and forth madly, taking it all in, and it looks like we're on the hunt for a new dance studio for the girls.  this one ain't the only fish in the sea, and i really have zero desire to support a business run by a woman who has no tact and was such a royal bitch to small children.  eff that noise.  we'll finish out the month and then we're blowing this popsicle stand.

so, hey, locals?  got any suggestions for non-competitive dance studios in the glendora-san dimas-la verne area?  help a sista out here.
at January 16, 2013

Email ThisBlogThis!Share to TwitterShare to FacebookShare to Pinterest
Labels: bean is a dancer, nobody messes with wan's friends