when the bean and i were invited to a playdate at rocky's house, i figured it was a good idea to try out a fun recipe from my pinterest food board.  i always pin so many tasty looking treats, but don't really get too many opportunities to make them.  well, i suppose i could, but the hub and the teen would yell at me for the constant flow of muffin top-busting snacks.  and i don't like getting yelled at, so there you go.

because i didn't have a ton of time to play with, i settled on something quick and easy - cupcake-flavored "puppy chow."  we're all familiar with this concept, yes?  take a bowl full of chex cereal and add all sorts of yummy ingredients to it and voila!  [insert random flavor here] deliciousness.  and i was happy to finally have a reason to use a bottle of almond emulsion i've had in the pantry, just waiting for the perfect recipe. 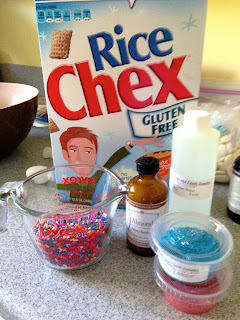 the recipe called for either white chocolate chips or candy melts, and i had both.  because i've always had no issues with melting them in the microwave, i popped my pyrex right in and hit start.  except that i ended up with a really weird-looking mixture, since i followed the instructions and added a chunk of butter to melt with the chocolate.  thinking that maybe i'd done something wrong, i scraped the goo into the trash and started fresh, this time the old-fashioned way with a pot on the stove.

and ended up with the very same result. 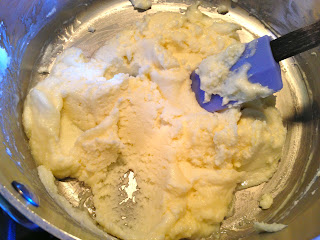 now, the directions did state that it would be thick - i just didn't think it would be like that, exactly.  i'm so sad to have finally stumbled upon something that butter doesn't make better.  and not wanting to waste another batch of perfectly good white chocolate, i forged ahead and mixed it into the cereal.  after it was sufficiently coated, i poured these in: 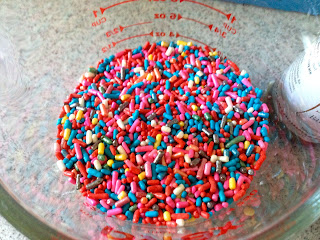 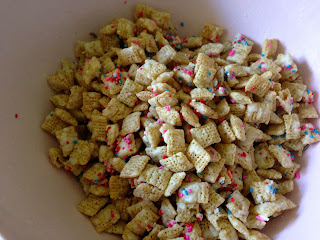 the whole shebang went into a giant ziploc bag to be tossed with the requisite powdered sugar, and it finally started to look like it was supposed to.  sorta.  at least the ribbon made it look festive. 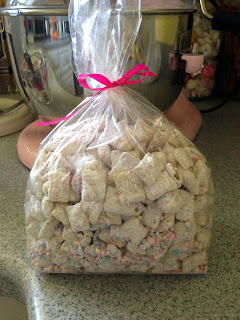 i never thought i'd have so much trouble making a batch of freaking chex mix, man.  sheesh.  but i was pleasantly surprised to find that with the addition of almond and butter extracts, this stuff really did end up tasting like a cupcake.  a crunchy cupcake.