along with those marshmallow martinis i made for new year's eve, i decided to tackle something i've been eyeing for awhile now:  homemade cinnamon rolls.

since the dinner rolls i made for thanksgiving were such a hit, i was inspired to work with yeast doughs again.  i think it's fun, and it always makes the house smell so good.  i was torn between the popular pioneer woman recipe and one from allrecipes that claims to be a cinnabon clone.  because i wasn't in the mood to do math (PW's recipe makes seven freaking pans of the stuff), i opted for the latter.

proofing the yeast and mixing the dough was a snap.  i covered it with a towel and set it aside to rise for an hour, assuming that the kitchen was warm enough after i'd made dinner.  of course, when the timer went off, the dough hadn't done a damn thing but sit there like a lump (which is what it was, i suppose, but you get it).  so i popped it into the still-warm-but-turned-off oven and hoped for the best.

another hour later and it still hadn't risen much.  gah!  i wondered if the milk i proofed the yeast in had been too warm.  i left it in there and went about our evening activities and then finally, finally - success: 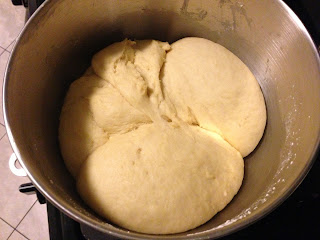 i rolled it out into whatever odd shape came out - you're supposed to make it into a rectangle, but i'm a rebel - spread some softened butter on it and then sprinkled the cinnamon-brown sugar mixture all over.  i wasn't entirely satisfied with the amount of butter i'd used, so i winged it and dropped little pieces of it all willy-nilly. 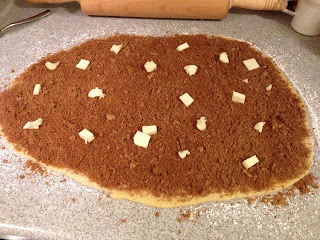 then it got rolled again, this time jelly roll-style, and then cut into a dozen pieces. 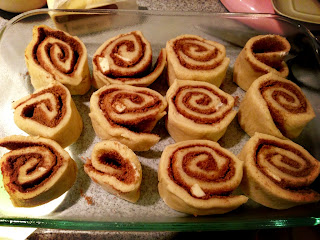 the next morning, i pulled it out of the fridge and popped the pan into the oven.  while the buns were baking i made the cream cheese icing.  and then just because, i added a little bit of pink food coloring.  the ILs were watching the rose parade on tv with the bean, and i thought it would be fun.  plus, it matched quite nicely with my baking paraphernalia. 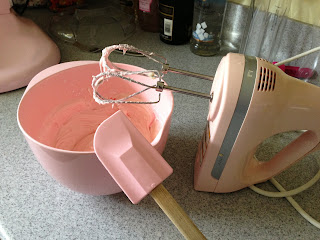 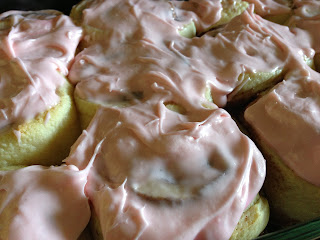 i plopped them onto pretty plates, and the bean was only too happy to act as my server.  i should've gotten a picture of her, but i didn't.  sue me. 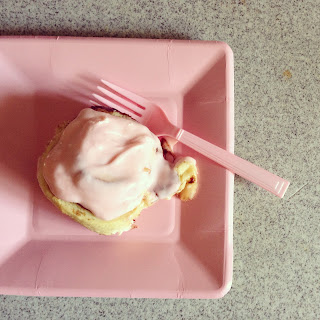 when i dug into mine, i was astounded at the sheer level of sugar in my mouth like whoa.  and i think i may have pulled it out of the oven a little too soon, because the middle was still a teeny-tiny bit doughy.  the others seemed to enjoy them, though, and that's all that counts. 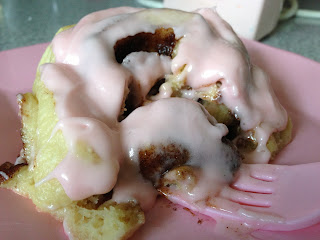 there's about half the pan left over, and i'm wondering if it'll work if i toss it into the oven again for a bit to see if they cook the rest of the way.  except that the frosting will get all jacked up.  poop.

Email ThisBlogThis!Share to TwitterShare to FacebookShare to Pinterest
Labels: adventures in cooking, yay for new year