you know, i've said before that if only i could suck it up and change my diet and cut out a bunch of the junk that's a staple in my everyday life and kept up the pace of my current workouts, i'd probably look pretty badass.  too bad all those cookies and pizza and the chocolate and cupcakes and and and... all get in the way.  haha!

but then xtend barre announced a new challenge for 2015.  from february 2nd to april 2nd, you commit to one of three levels for both fitness and diet.  there's the core, where you do at least 3 barre classes a week, eliminate all processed foods, and basically eat clean.  then there's hard core, which is 4 classes plus cutting out sugar, and then the extreme has you in class 5 times a week and adding dairy and gluten to the no-no list.

but as i perused through the challenge manual, i realized that a lot of the guidelines in the core level for diet were pretty doable.  and, i gotta admit, are changes that would be good for the whole family and mostly ones that the hub has been after me to adopt for ages.  and so... 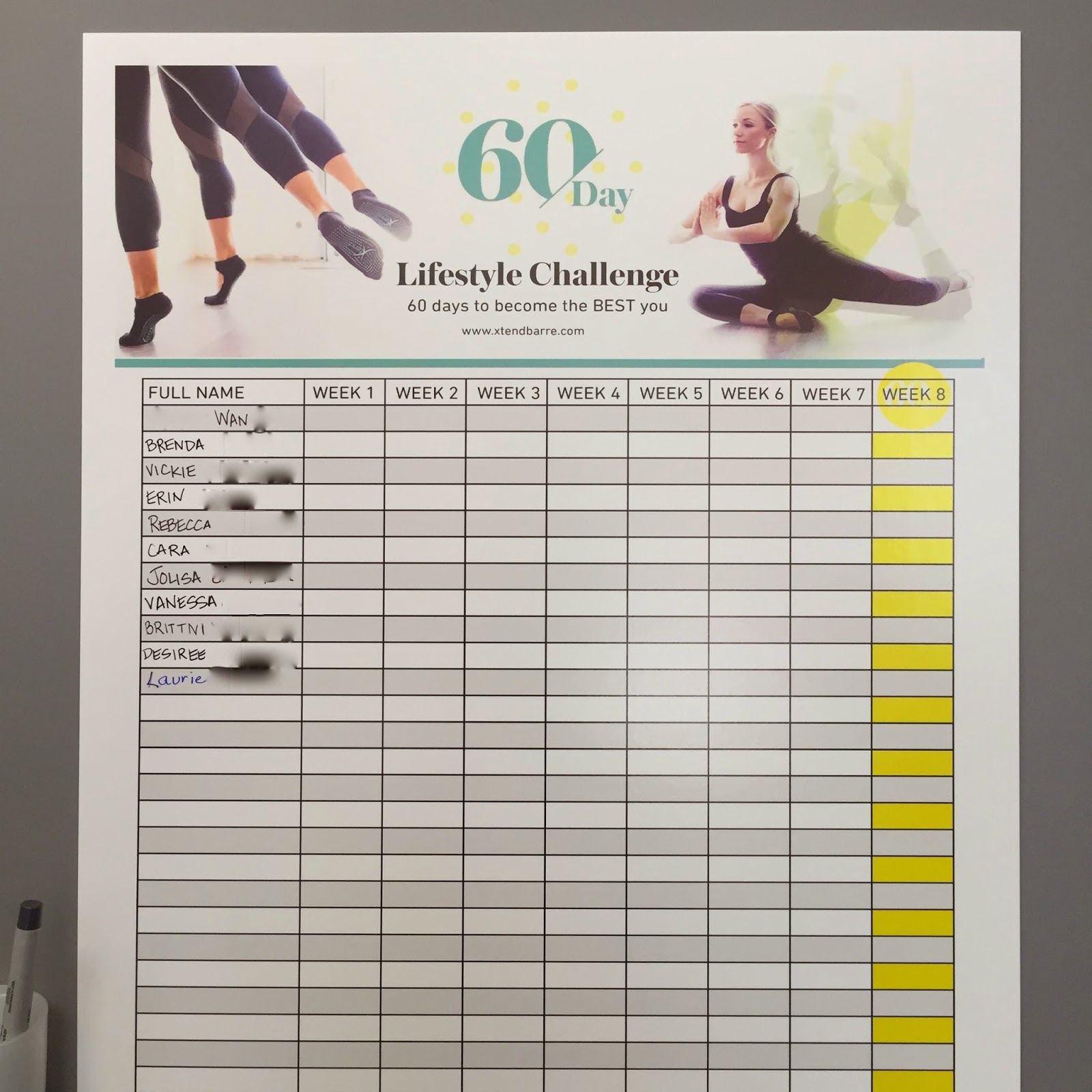 after celebrating baby monkey's birthday, i dropped the bean off at home and headed over to the studio for the official kick-off party/weigh-in.  yaaaaay.  i stepped on this contraption and held onto the sensor for a few seconds: 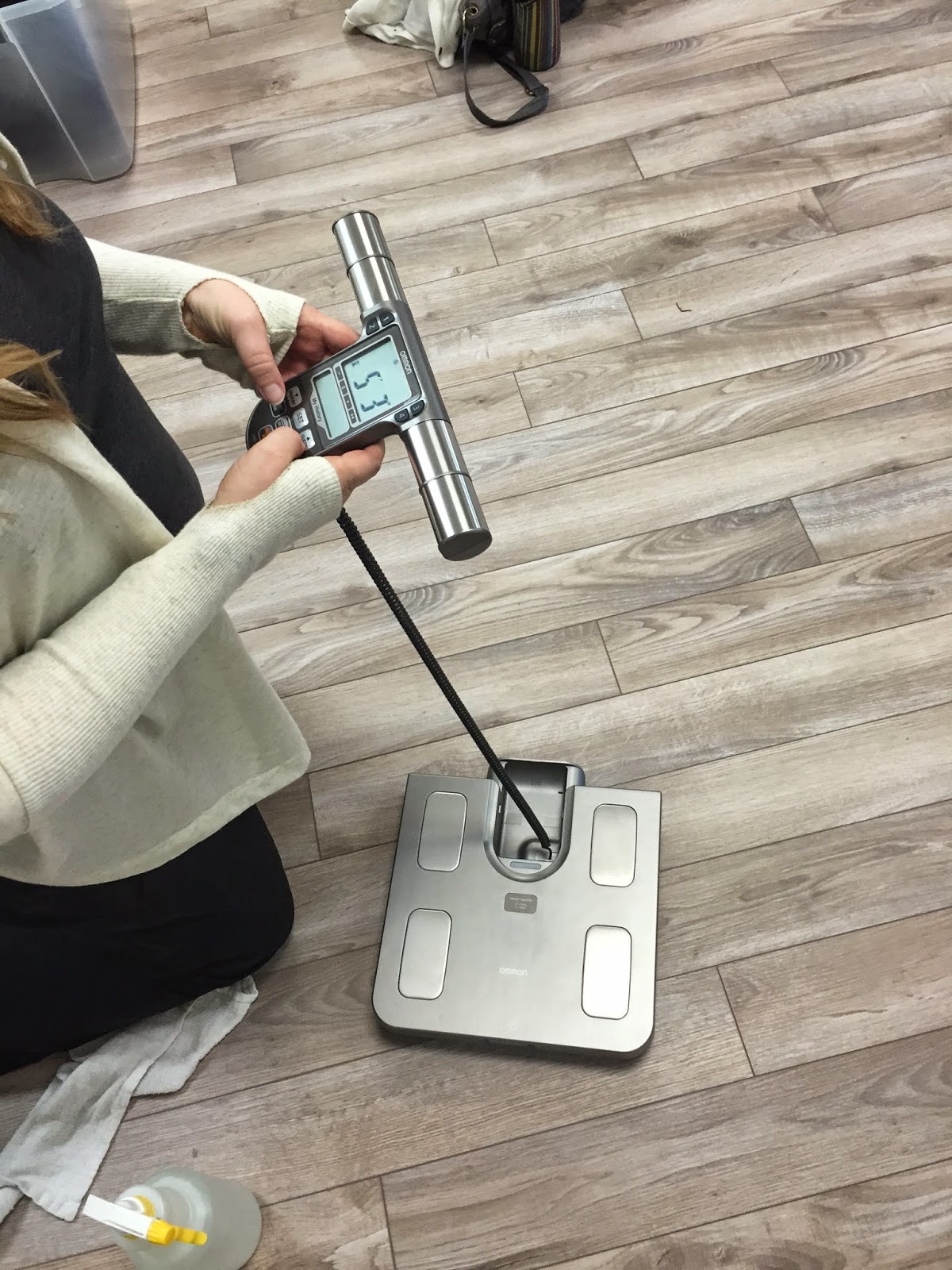 and then, just a little bit more humiliation - the measuring tape came out and with it, the ugly truth: 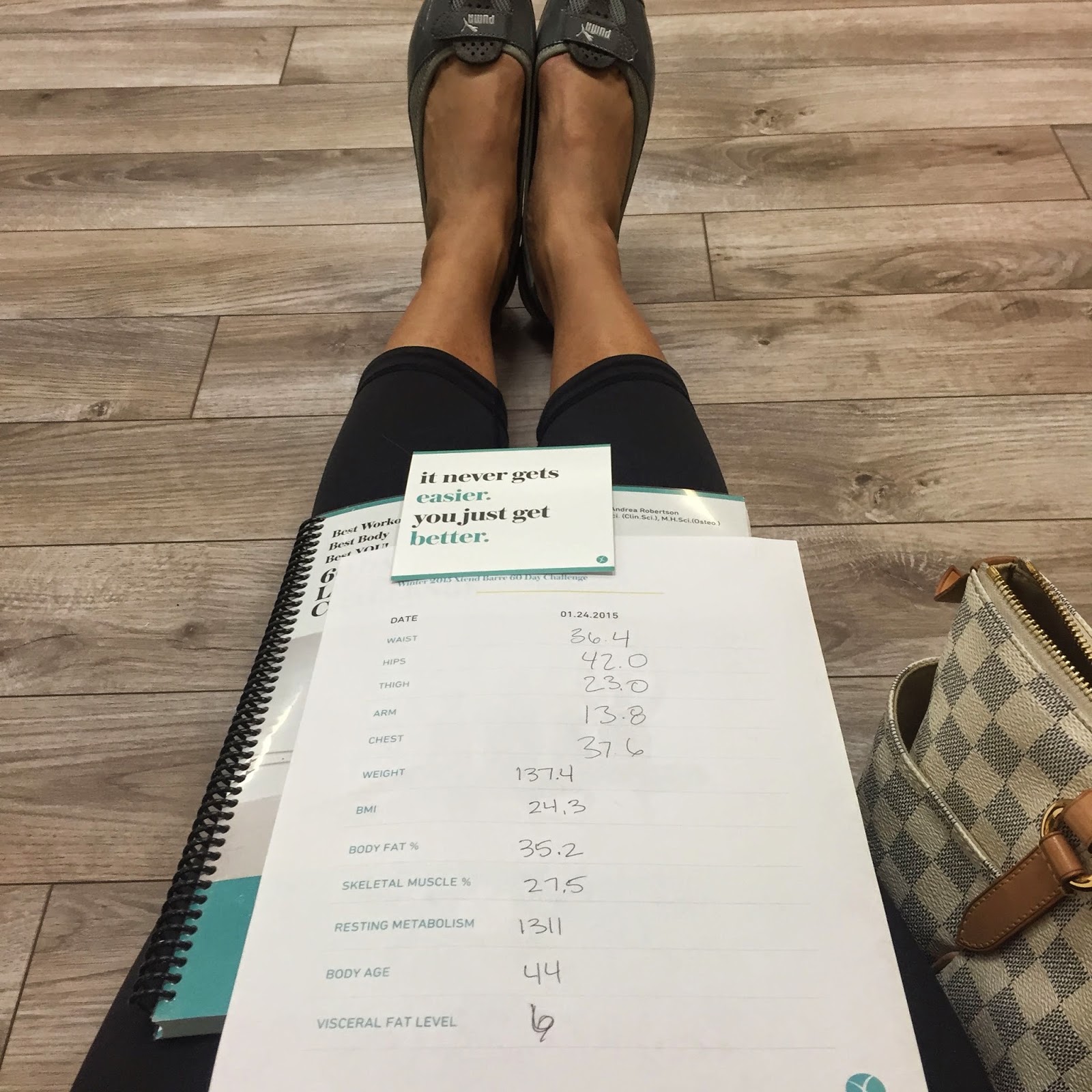 this biophotonic scanner takes information from the palm of your hand and provides you with a score reflecting the antioxidant level of your skin.  basically, it tells you how well you're doing with getting those daily fruits and vegetables in.  and as luck would have it, those smoothies we started making again really helped.  i was so sure i'd be in one of the lower levels, but my score was rather solidly in "normal."  phew. 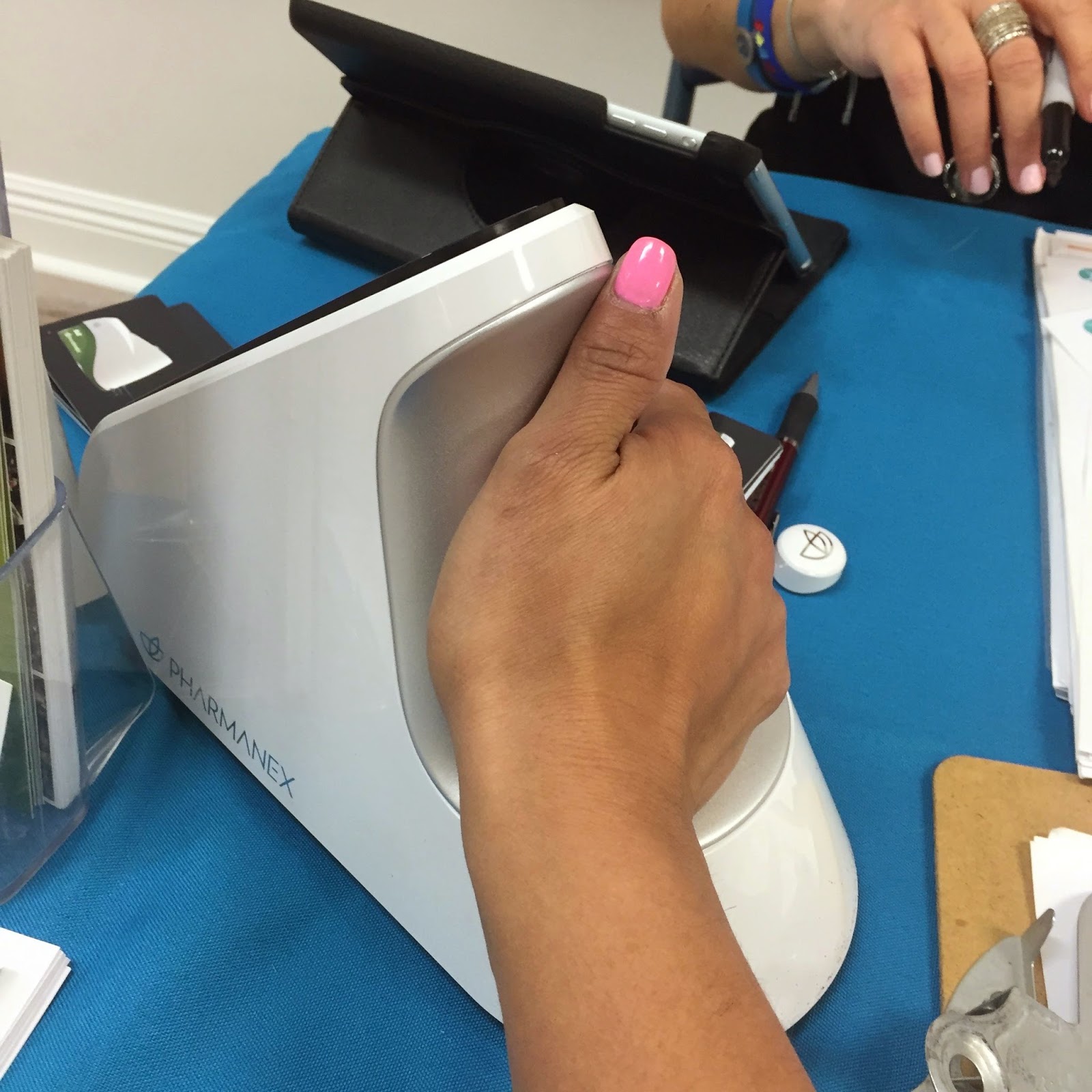 a local fresh-pressed juice bar was there to offer samples of their juice cleanse.  he asked me what my favorite vegetable was, and when i said "cucumber," he handed me this. 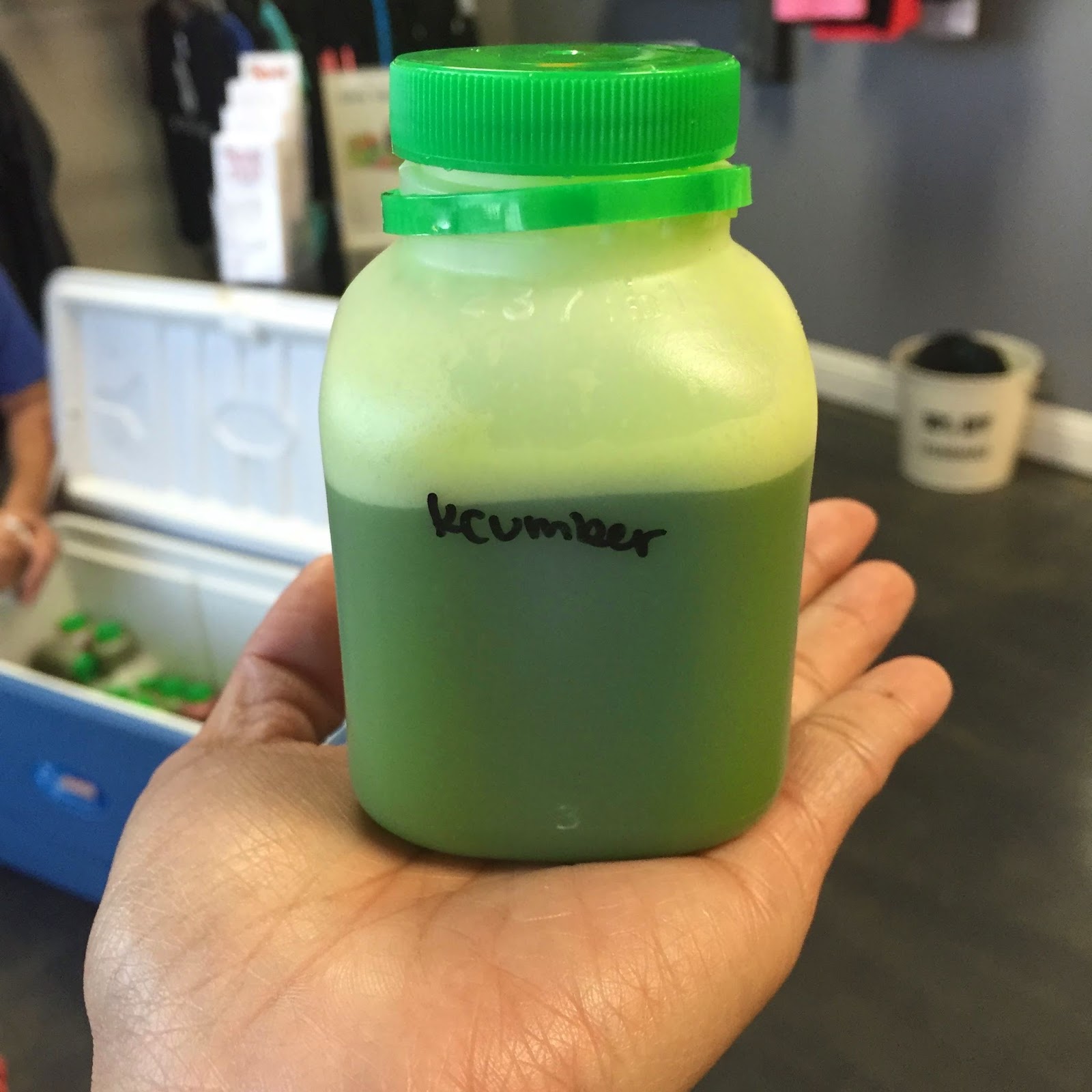 it's a mixture of kale, cucumber, spinach and some green apple.  sounds and looks icky, but it was pretty tasty.  and to further enhance our challenge, the bar has a special secret menu just for us that works with the dietary guidelines we've chosen.  it's suggested that we do a juice cleanse once a week - you get a jug of your choice of juice flavors and a jug of lemon water and you drink it all day long to flush out your system.