okay, i know i just talked about girl scouts in yesterday's post, but i spent last night working on something super duper fun that i just have to share.  mostly because i'm really proud of myself for getting it done, and also because i'm excited to have caught the sewing bug again.  like, i totally want to start a new project right this very minute.  i just have to find something i really want to make, heh.

anyway, when my co-troop leaders and i went through cookie training with our local service unit last month, we spied something on display that looked like something we totally wanted to use: 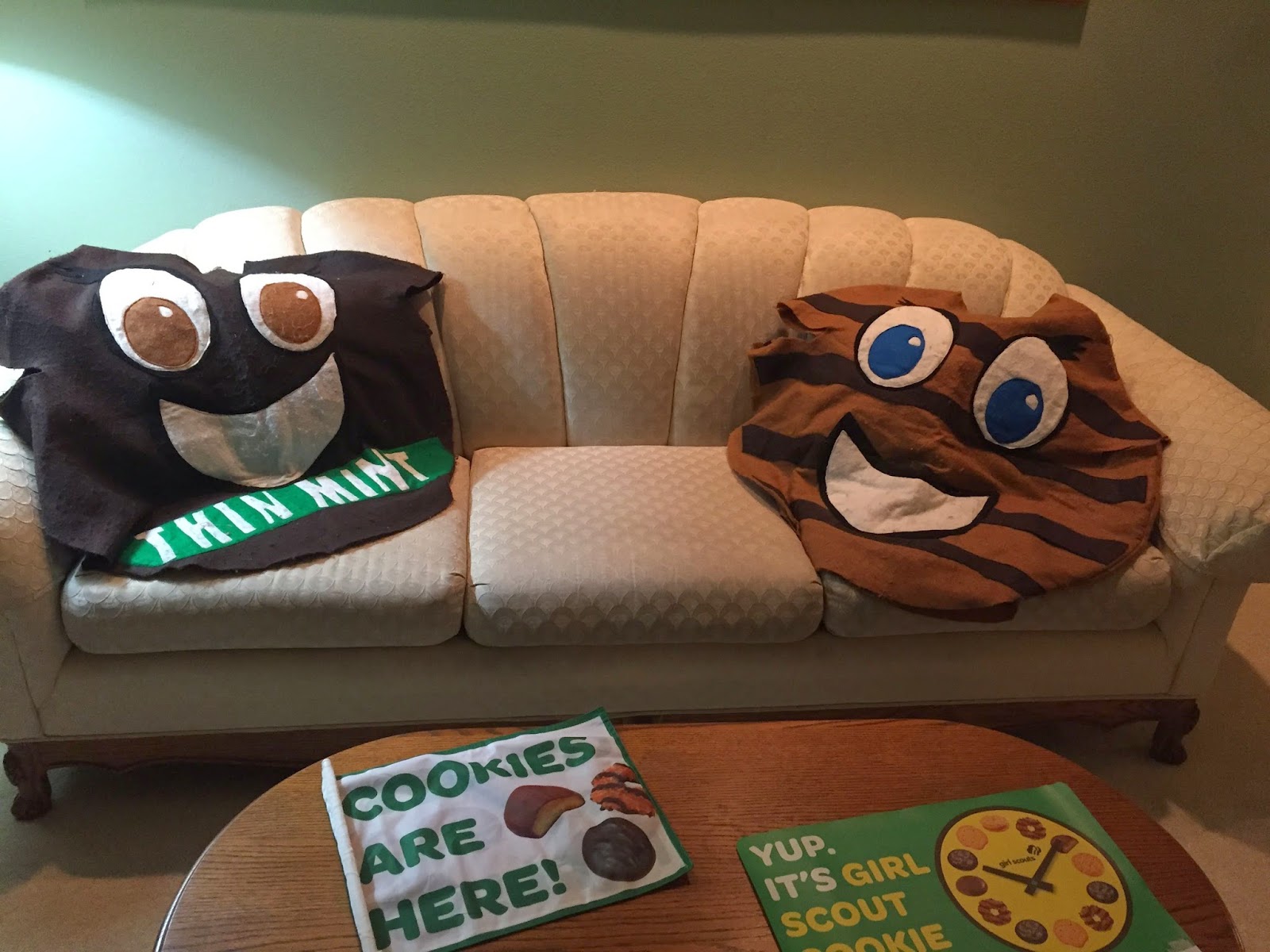 upon closer inspection, i realized that they would be easy peasy to recreate.  just a couple of yards of felt and some sewing here and there, and we wouldn't have to borrow them for our cookie booths that we'll be manning come february.  a little googling turned up a great tutorial that looked pretty simple and easy to follow, and with one trip to joann's for materials, i got started.

rather than take the extra step of making a paper pattern as detailed in the tutorial, i decided to go old school and bust out a pencil with some string to create my circles. 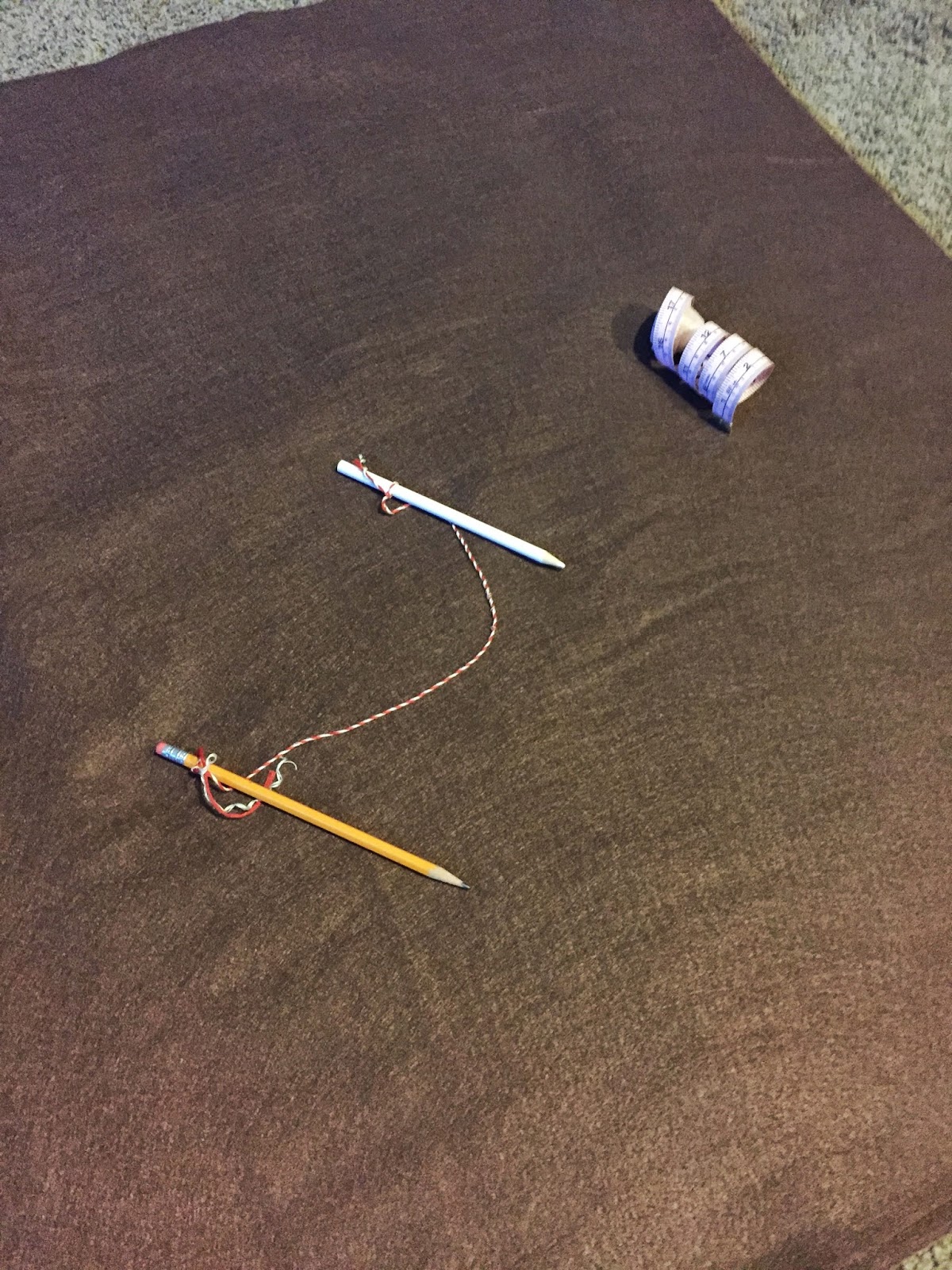 with the bean's help, i had my first circle done and ready to use as a pattern for the others i needed to cut out.  i'd decided that i wanted to make at least two costumes, and in no time i had everything all ready to go. 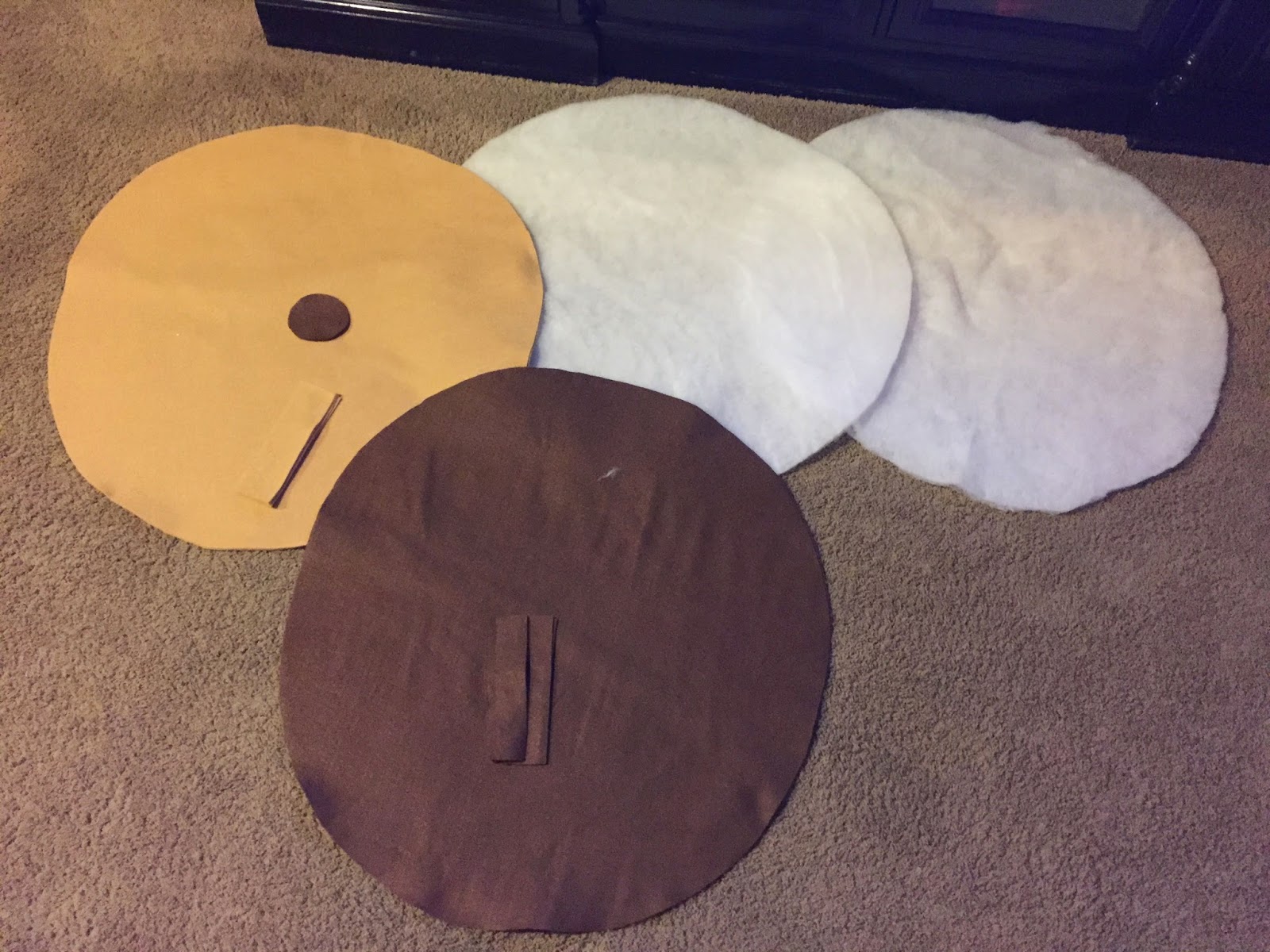 to create the chocolate stripes on my samoa cookie costume, i just took some of the leftover brown felt (and there's a ton because i overbought as usual) and used my rotary cutter to make some wavy stripes.  i laid them out on the beige circle, placed the brown circle in the center to create the hole, and voila: 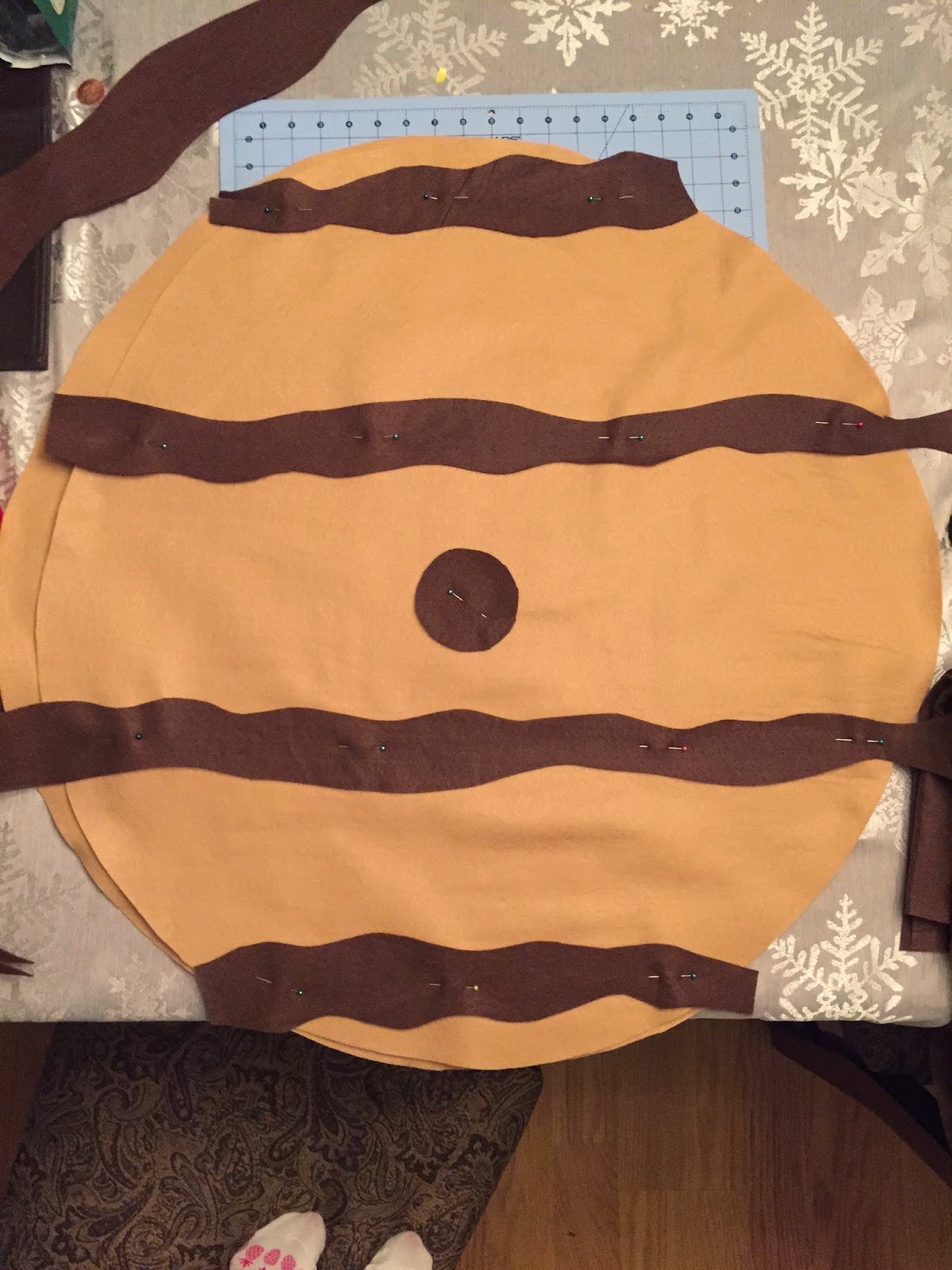 except that it looked rather...areola-ish to my giggling 10-year-old eye.  i cut out a larger circle, replaced it and stepped back for a better look.  much better, don't you think? 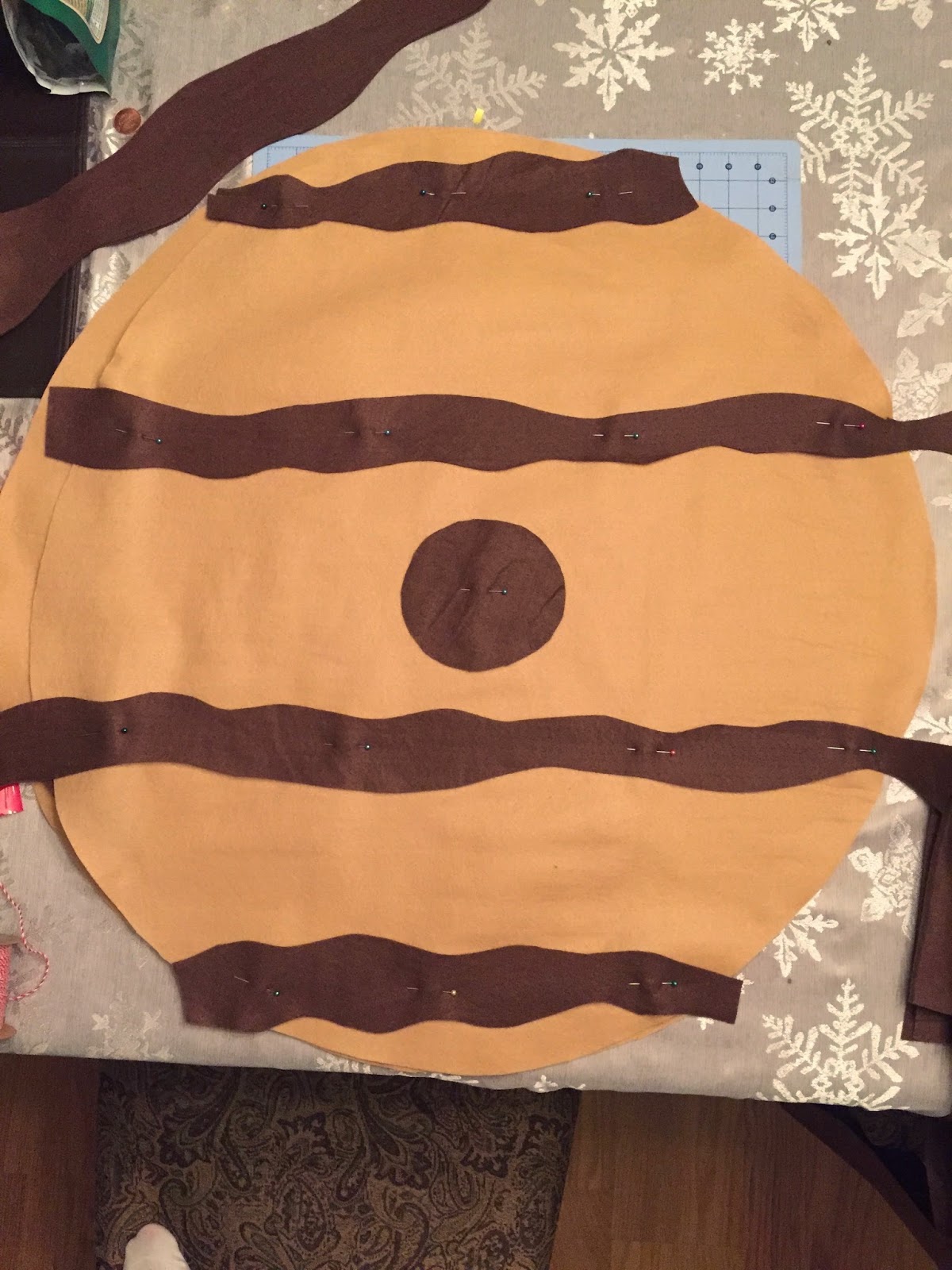 i used a zigzag stitch to sew the pieces onto the base. 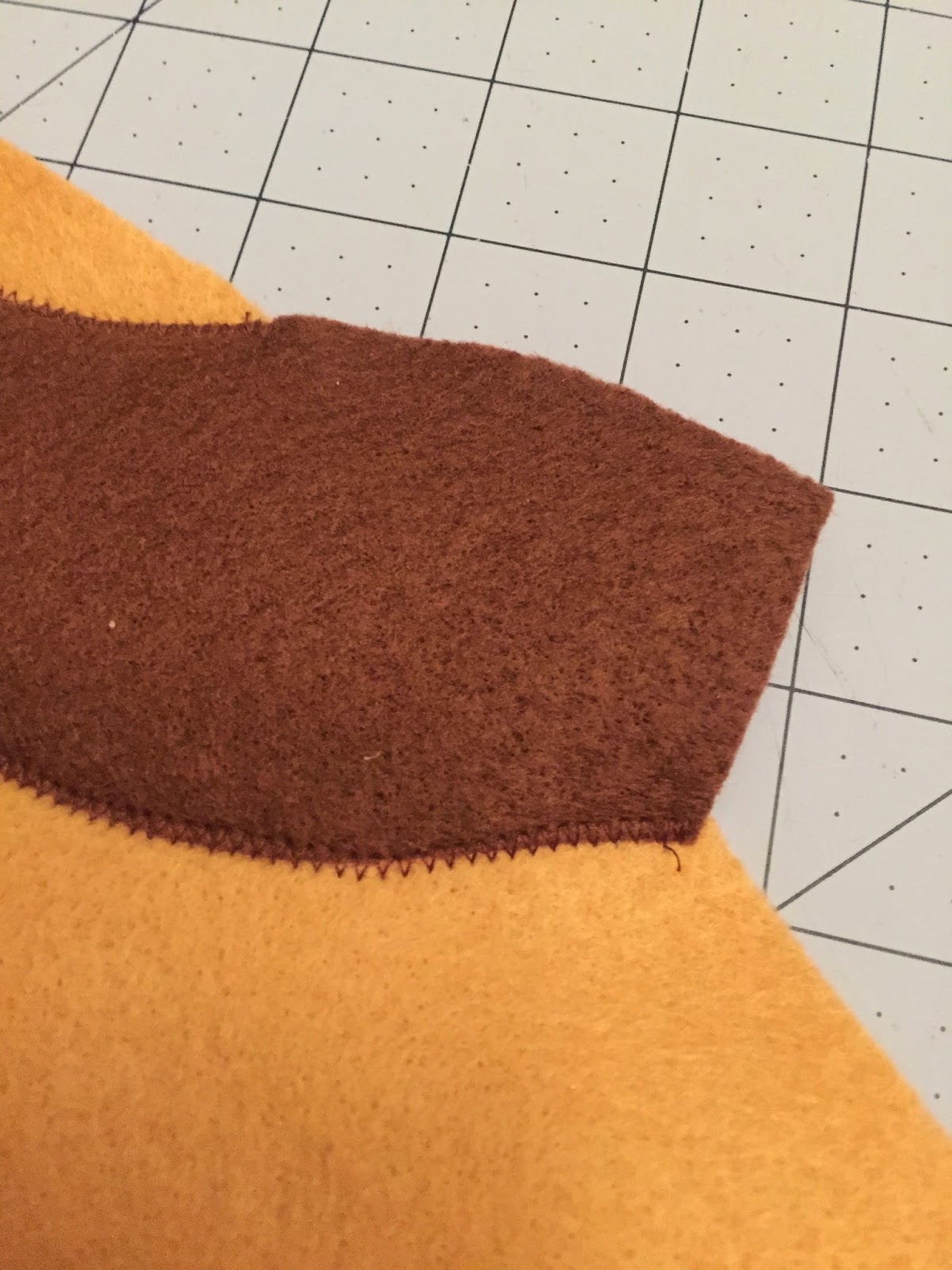 going back to the tutorial, i placed first the shoulder straps and then the side ribbon ties. 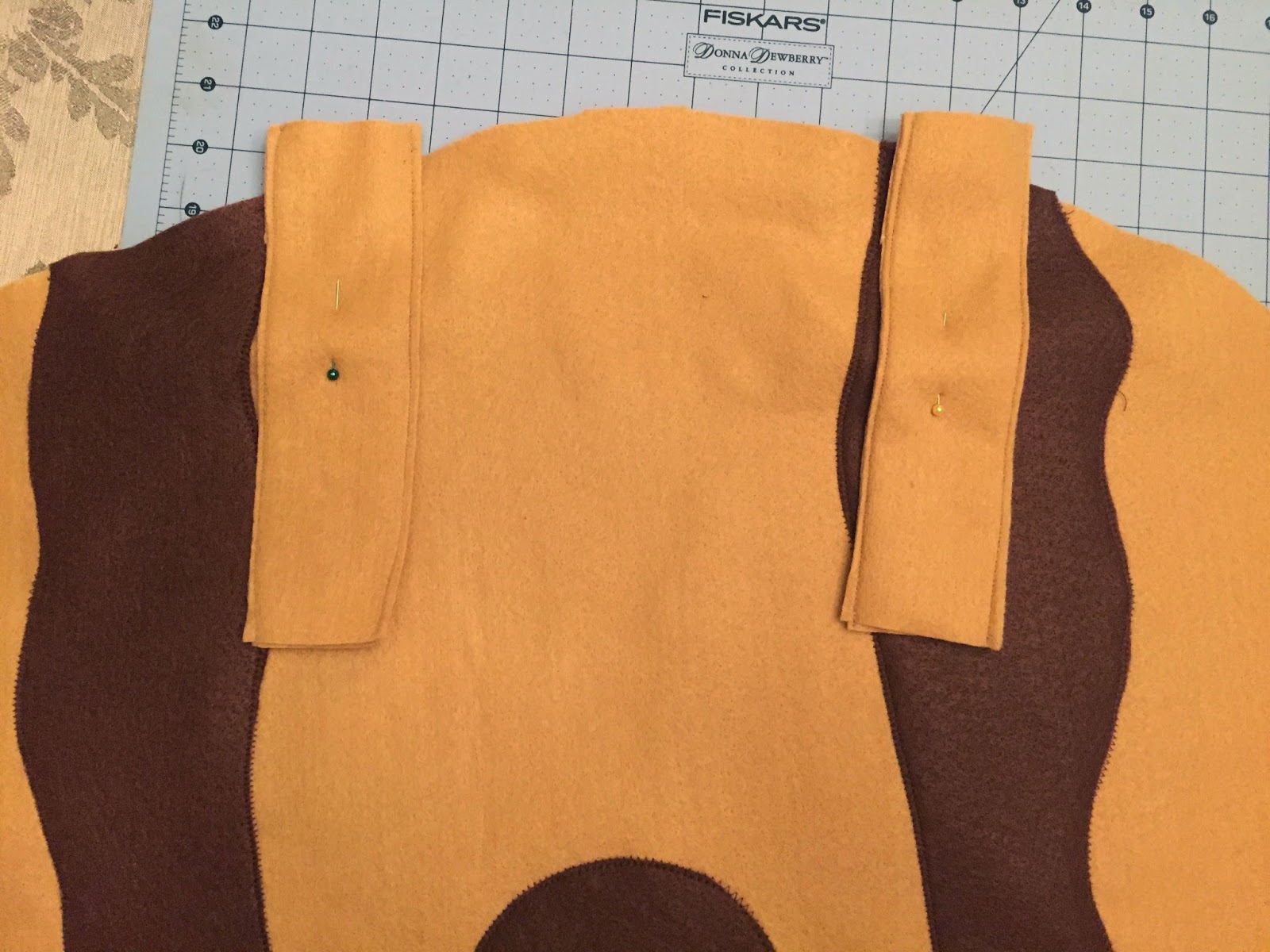 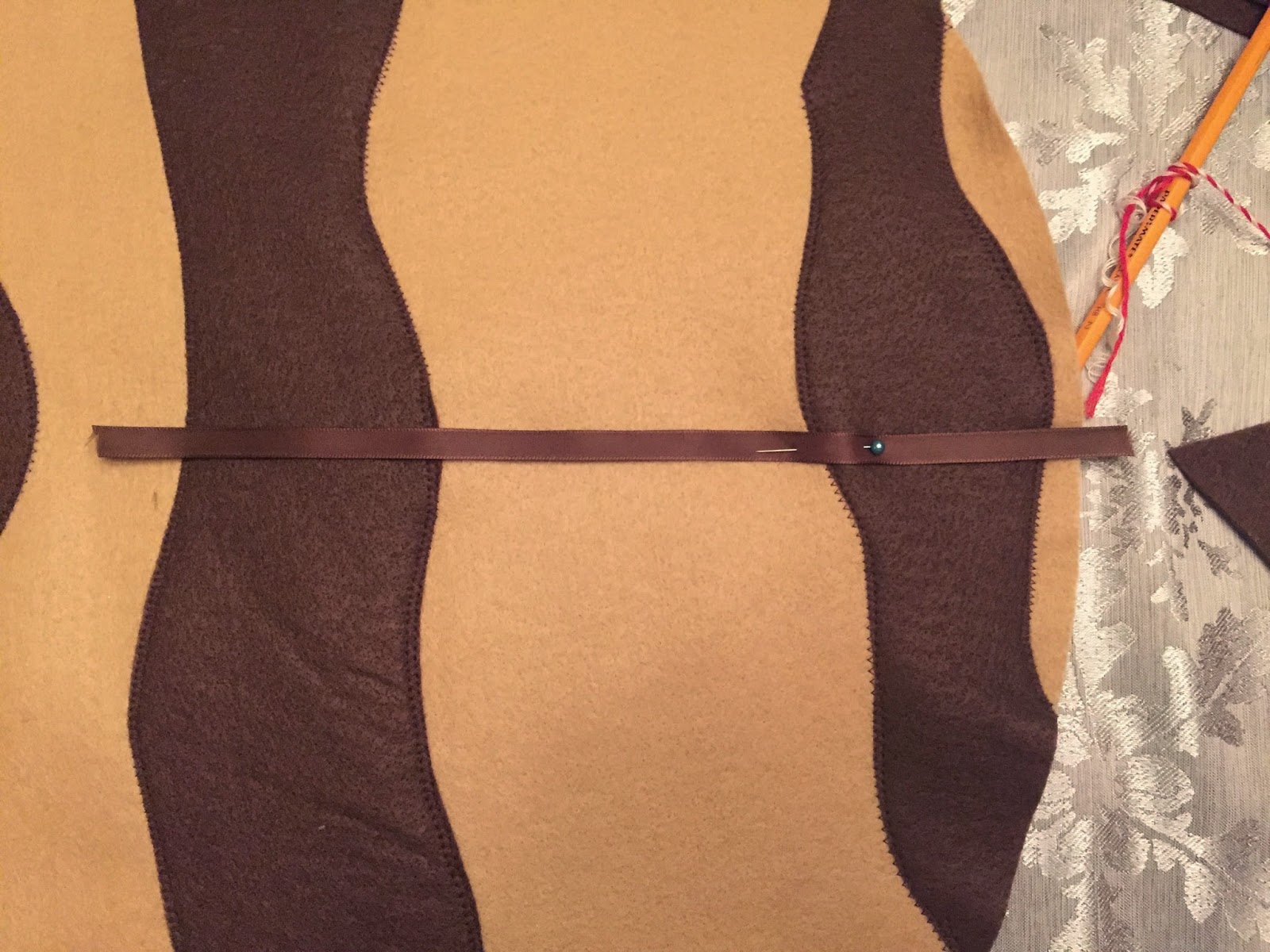 the first half of my cookie costume came together easily, which of course meant that i got overconfident about what i was doing.  without looking at the tutorial again, i assembled the second half of the cookie - and totally messed up.  i'd sewn the piece with the chocolate stripes backwards, and so when i tried to flip the pieces inside out it was all wrong.  GAH. 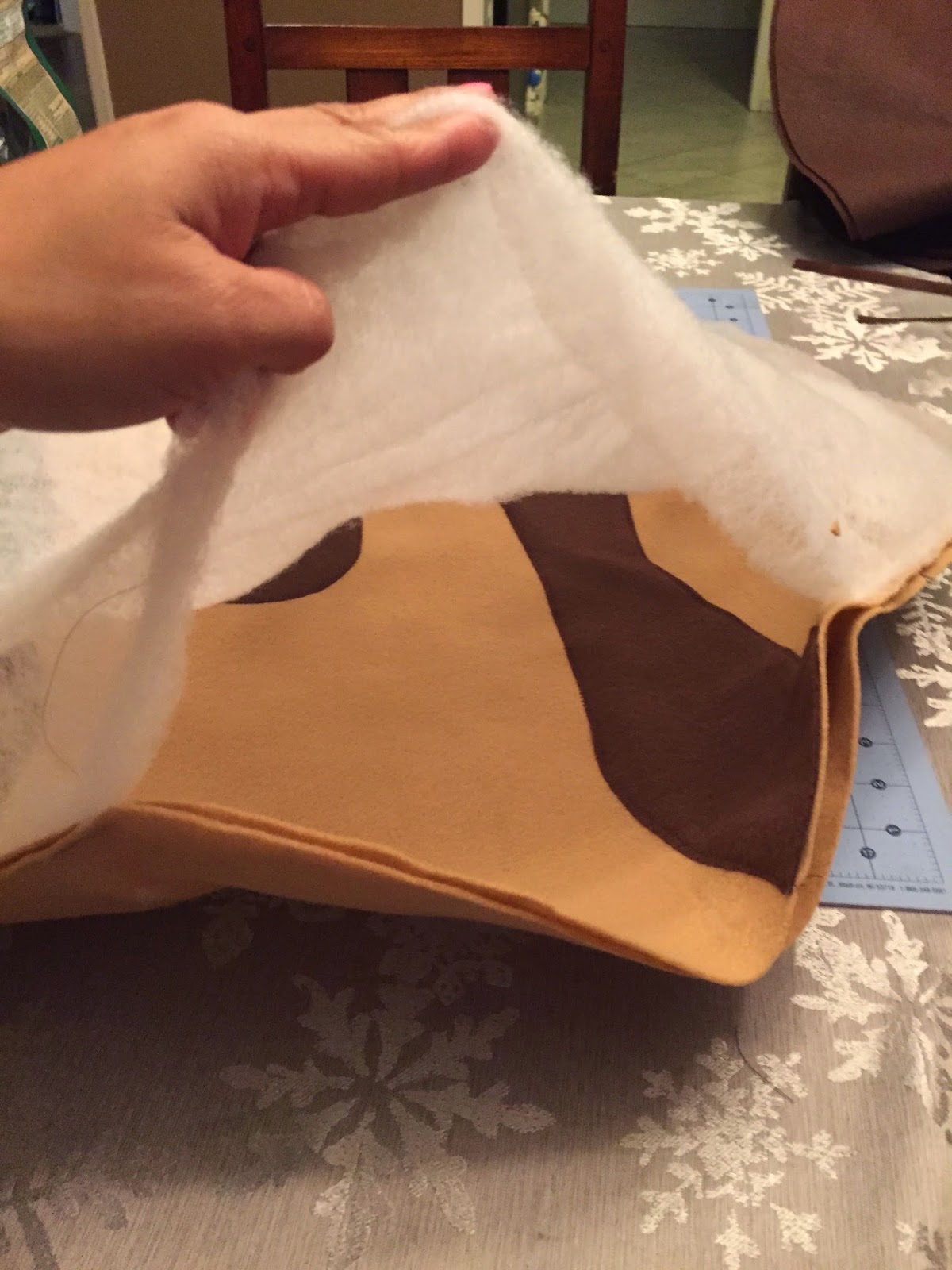 i was so annoyed, and busted out an old frenemy to repair the damage - the dreaded seam ripper. 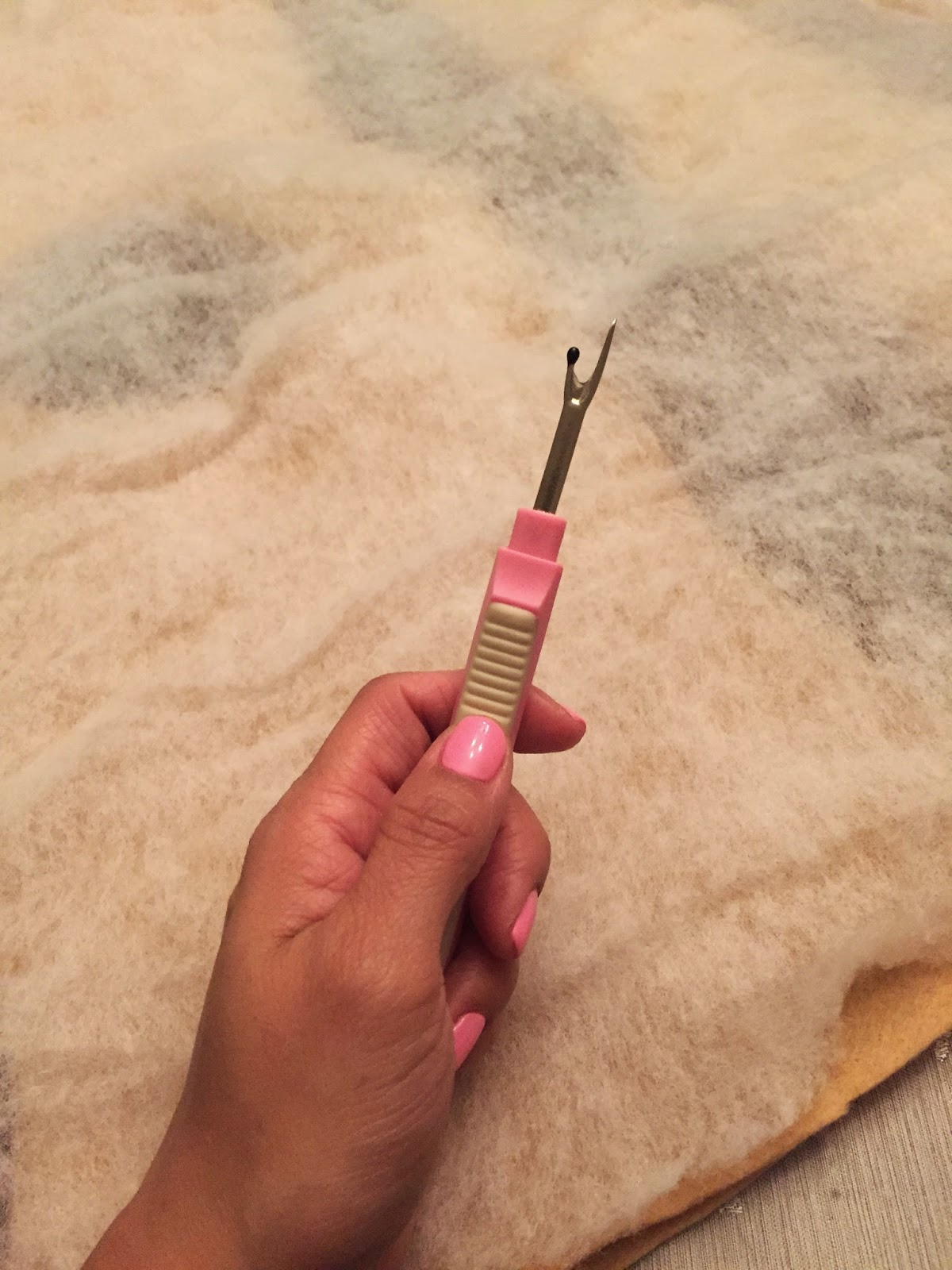 once i'd undone what i'd screwed up and got back on track, the rest of the costume was easy to finish off.  with my handy dandy selfie stick and remote (best gift ever - thanks again, lilcee!) i snapped a photo of the finished product. 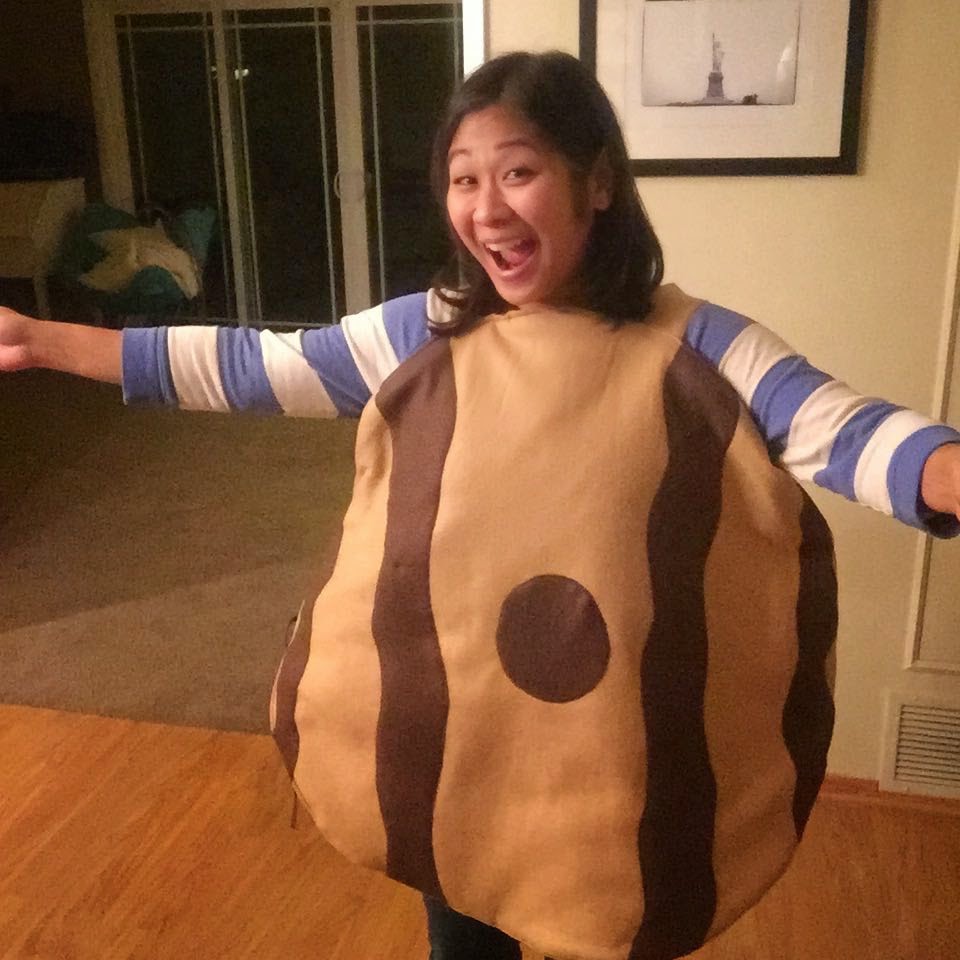 for the second costume, i'd decided to follow the advice in the tutorial and add a sash to identify which kind of cookie it was supposed to be.  without that, it'd just have looked like a round turd and that just won't sell cookies, i'm thinking.  in an attempt to simplify the process, i created a quick template to cut out using my trusty silhouette die cutter and busted out an accessory i've been waiting for just the right moment to test out: 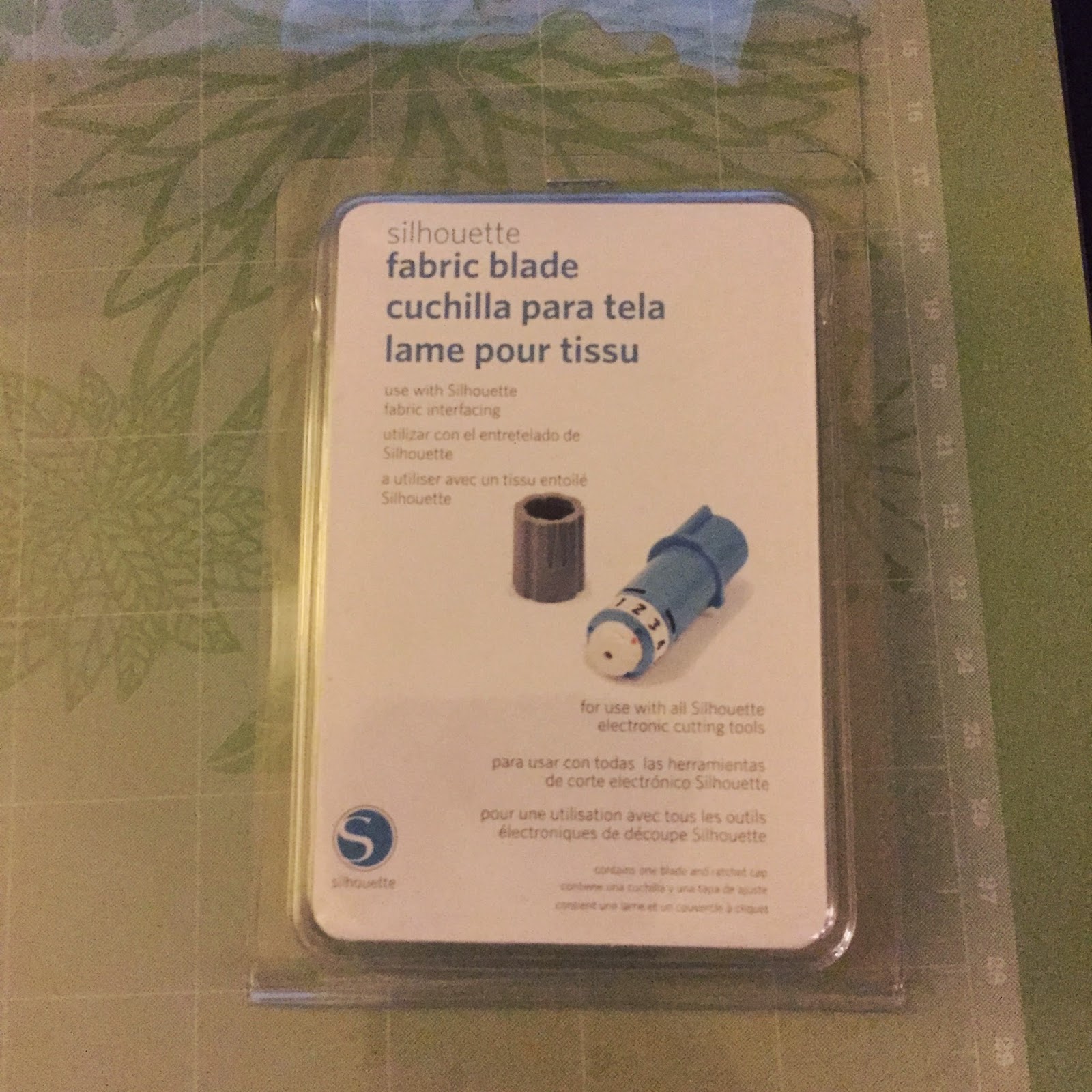 after fusing some iron-on adhesive to the back of my felt, i placed it onto the sticky mat and hoped for the best. 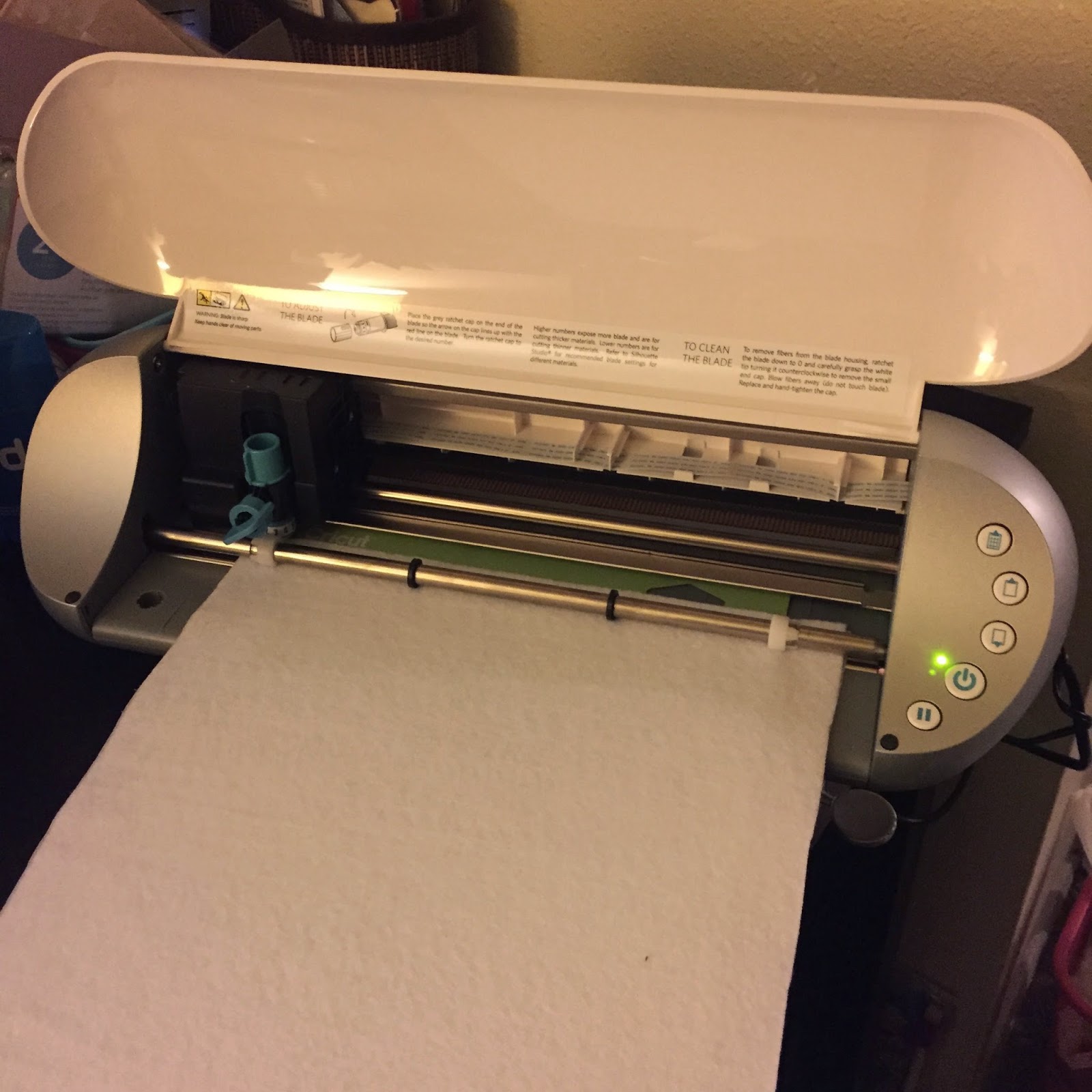 and just as i'd feared, it didn't quite work out the way i wanted it to.  even using the highest setting on the blade, it wasn't enough to cut the letters out completely.  i could see them cut out on the felt, but that blade hadn't made it all the way through the adhesive, rendering my efforts absolutely useless.  i ended up cutting the letters out on a piece of paper, using it as a stencil to trace onto the paper backing of the felt, and using a basic pair of scissors to get the job done.  i laid them out onto the circle of brown felt, and here's what it ended up looking like: 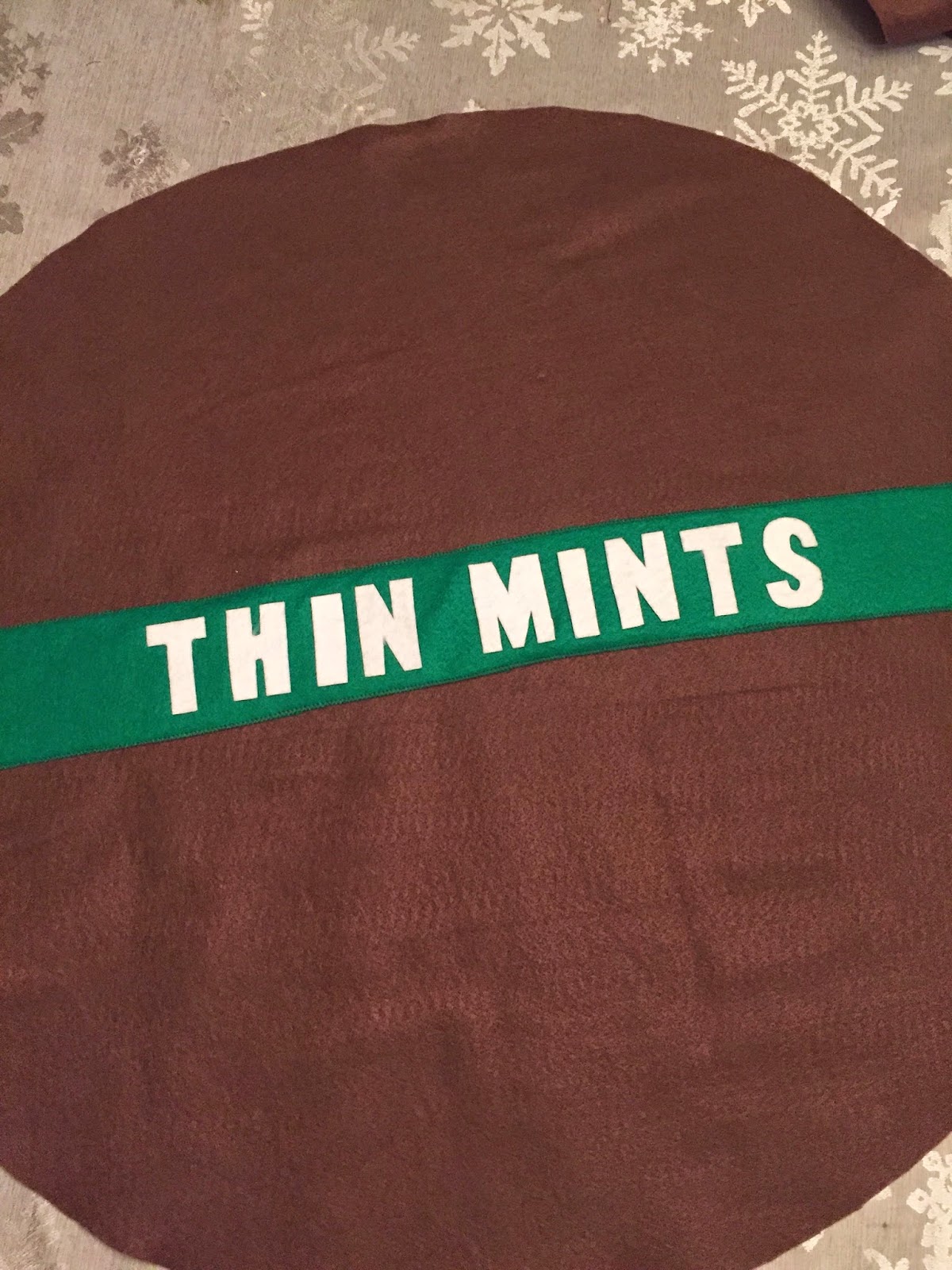 having gone through the entire process once, i was able to whip through the rest of the steps and finished in less than half the time it took to make the first costume.  i busted out the selfie stick and the stupid face again, because why not: 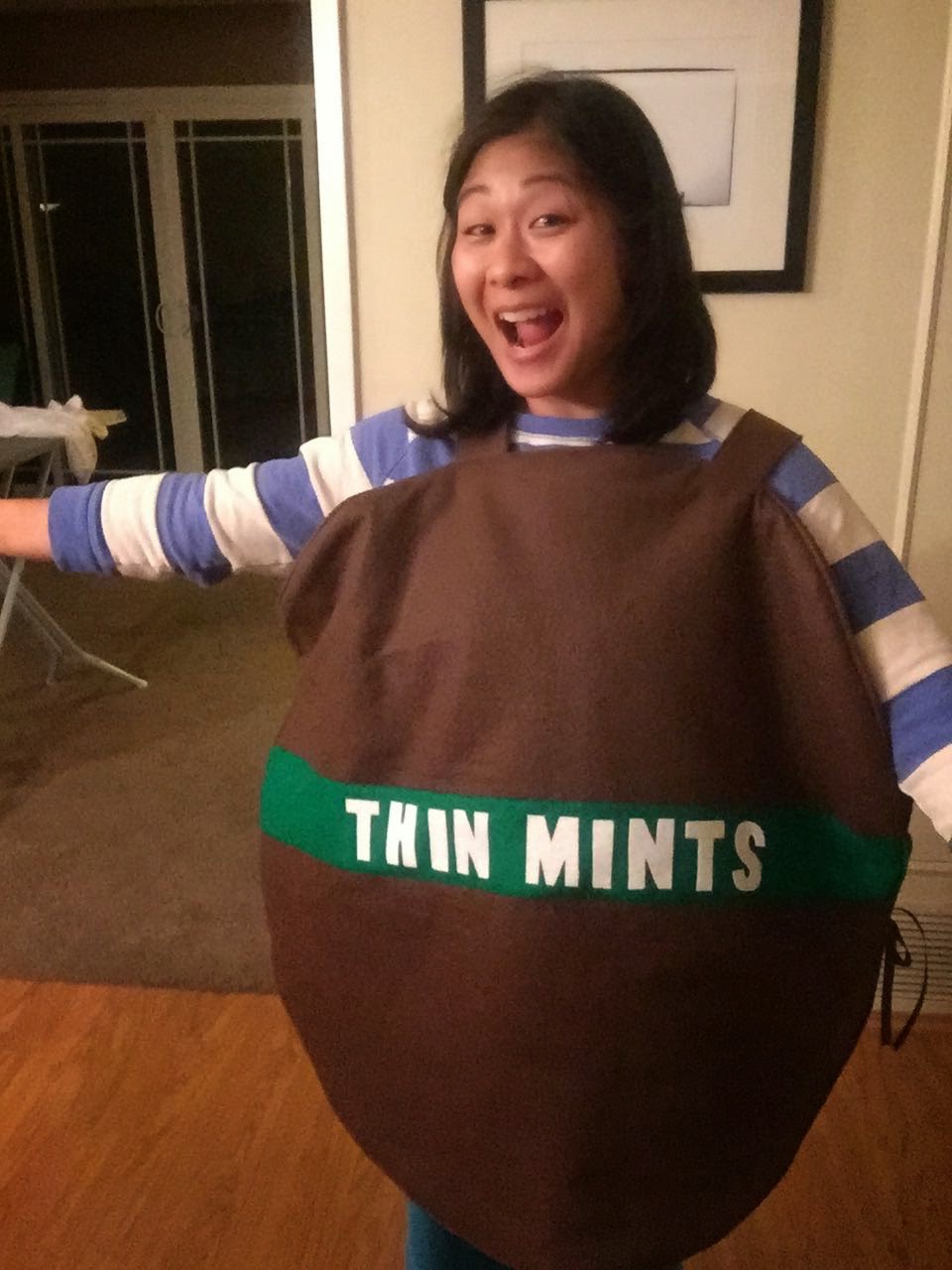 do i look tired?  i totally do, huh?  i'd taken 5am barre class and then went right into my usual monday cleaning routine that takes about 2.5 hours, and i was just kind of done for the day.  but i'm really excited to show these to our girls and their parents at our meeting this week!  i hope they don't think they're super cheesetastic.  but come on - picture cute little 7-year-olds in those things with a mound of girl scout cookie boxes behind them.  i know I'D buy at least a box or two...wouldn't you?
at January 13, 2015