those of you who have been reading for awhile will know that while i have a relatively large family (as most filipinos do), i'm not as close to them as i used to be.  there are times when i wish that weren't the case, but it is what it is.

and so i was really taken aback when i got a text from one of my cousins awhile back that told me that his mom had just been diagnosed with stage 4 cancer.  i knew that she had just been on a cruise with a bunch of family members, like literally the week before, not to mention that she had just retired just before christmas.  i was just absolutely shocked at the news.  he expressed that she was focusing on resting and asked not to be bombarded with phone calls and such, and so i just let him know that i'd be thinking of and praying for her, and offered to help in any way i could.  we live just about ten minutes away from them and so it would be easy for me to head over if there was anything they needed.

as it turns out, her cancer was pretty much beyond any treatment that would actually do anything for her but prolong the suffering.  after a bit of a rollercoaster ride during which she received some treatment, appeared to improve, and then got worse again, she and my cousins decided that the best option was to go home where she could be comfortable in familiar surroundings with a round-the-clock caregiver.

the hub, the girls and i went over to visit last weekend, to see her and offer support to my two cousins.  i wasn't sure what to expect when we got there, but she was awake and smiled at us when we walked in the room.  my mom and stepdad were there too, chatting and massaging her with essential oils...basically the only thing that she wanted anymore.  and when i looked at her, she still looked like my auntie.  the one who giggled with me when i was five over some boy i had a crush on.  who gave me two of the best playmates i ever had growing up.  i learned how to take care of babies because of her.  she was always part of all the family shenanigans - camping trips, weekend foodfest parties, the restaurant that was family-owned (which eventually crashed and burned, but that's neither here nor there), road trips, even all of those MLM/pyramid schemes we tried to get rich quick from.  she honored me by asking me to be an attendant in her two weddings, and then when i was facing life as a single mom of an elementary schooler, she took me and the old lady into her home and gave us the master bedroom.  she was beautiful and kind and generous and happy, independent and hardworking and devoted to her family.  and i just kind of took it for granted that she would always be around.

i took the bean with me to see her again this weekend, and this time there were lots more family members there during our visit.  we sat around her as one of my uncles told stories about their recent trip to the homeland, and the laughter filled the room as she lay there and listened.  my grandmother, who is typically not very outwardly affectionate, sat closest to my aunt and kept a close eye on her as she rested.  i couldn't help but watch when she leaned forward to whisper something to her and stroked her hair back, and all i could think about was how devastating it must be for her to see it all happening.  the notion of outliving your own child is one that haunts every parent, and it was the sweetest and saddest moment of the evening for me.

and then on sunday night, the dreaded text came through from my cousin.  she was gone, and while i was heartbroken, i also found myself feeling some joy and comfort in knowing that her pain and suffering was at an end.  she'd been such an active lady, always traveling and going out and doing things with friends and family, and it had to have been so hard for her to be bedridden, unable to do anything and live life the way she wanted.  i prayed for my cousins, who were now facing life without their beloved mom, and for her grandchildren who she loved so much and was so proud of.  the old lady and i spent the rest of the night talking about the days when we'd lived with her, and remembered how much fun we'd had back then.  that's where we were when the hub and i first got together, and there are so many memories tied to that house.

the next morning, i broke the news to the bean.  death is so hard to explain to a kid, and especially when you're still reeling from it yourself.  the first thing she said was "oh!  now she gets to go up and live in heaven!" and then she burst into tears as it hit her.  truth be told, she really only ever saw this aunt a few times that she could remember.  but with all of the recent contact with her and the rest of the family, she was really sad and i just held her tight and cried right along with her.

this weekend, we'll all gather together to mourn her loss and honor her and her children.  it'll be a difficult time for everyone as we process the idea of her not being among us anymore.  and while i have a handful of reasons for continuing to keep my distance from a majority of the family, i'm going to make much more of an effort for the bean to see her cousins on a regular basis.  she adores them and i think it'll be good for her to play with them more often and hopefully make some memories like the ones i have of me and my cousins growing up.

we love you, auntie.  we're going to miss you so much.  thanks for giving us just one more smile before you left. 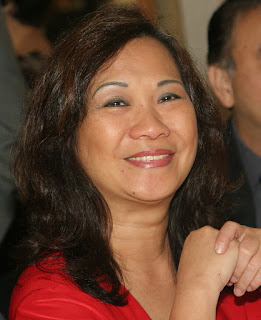 Email ThisBlogThis!Share to TwitterShare to FacebookShare to Pinterest
Labels: saying goodbye, we are family