try the grey stuff, it's delicious!

having recently gotten bumped up to a 5-day work week, the old lady now has sundays and mondays off.  this week, we decided to sneak off to disneyland to see if we could check out the new red rose taverne pop-up restaurant in fantasyland, in honor of the new "beauty and the beast" movie coming out this month.  it had just opened a few days before, and as with all things shiny and new at disney, it was super popular with waits of up to an hour-plus on busy days.

the weather report had originally shown rain in the forecast, but when we checked it that morning the rain had all but disappeared.  of course, once we arrived and got onto the tram it started sprinkling and moved right into a pretty steady drizzle.  gah.  and it hadn't deterred a ton of other folks from going either - it took us a solid half hour to get from the street into the parking structure and then finally into a spot that was blessedly close to the escalators.  security wasn't too bad to get through, but the trams were pretty packed.  we ended up splitting up so that we could board the next one that stopped to load up. 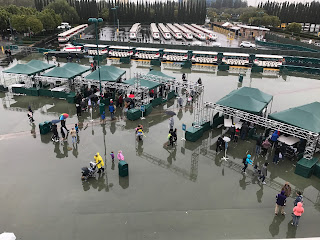 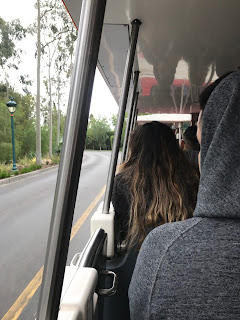 by the time we reached the main gate, it was pretty much pouring rain.  we stopped at a kiosk near the entrance and picked up a couple of ponchos to try and keep ourselves as dry as possible.  i'd considered wearing my rain boots that morning but had decided to trust in the weather forecast and throw on a pair of warm uggs instead...totally regretted that decision.  bah.  still, we were happy to be at the 'land. 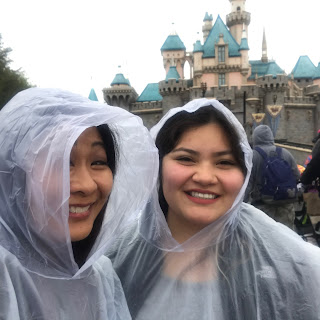 when we got to the taverne, there was already a line that went out the door.  knowing that it was a lot shorter than it would be on any weekend, we sucked it up and stood out there in the rain and waited it out.  it didn't look all that different from the outside, but the village haus restaurant that it was occupying could easily pass for pretty much any eatery in most disney movies. 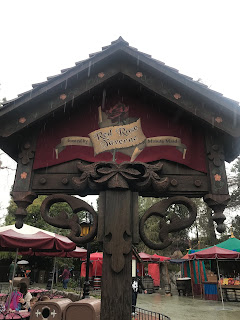 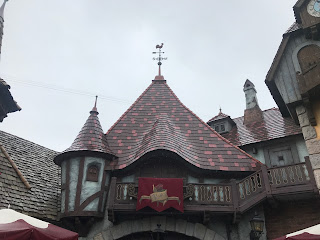 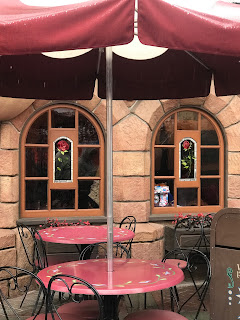 they'd draped these banners across where you'd normally see an image of pinocchio on the wall. 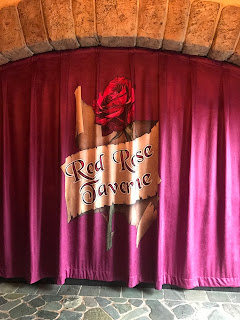 a cast member was handing out printed copies of the menu for people to peruse as they waited. 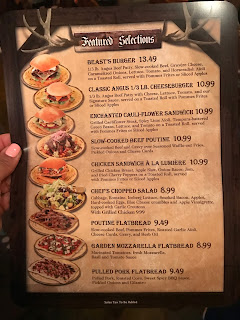 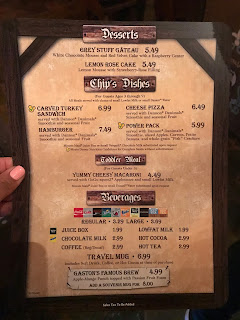 and everyone was super disappointed to hear that the limited-edition red rose sipper cups that a lot of us had come for were completely sold out.  come on, disney.  1 - you knew those things would be insanely popular and should have ordered an assload of stock and 2 - maybe you should have instructed the cast members to enforce the purchasing limit during the first day the taverne was open. people were posting photos of other customers who were walking out of there with dozens of sippers, which have now of course surfaced on eBay for $70.  they're $12!  ugh.  the sipper looks like this (not my photo, totally swiped from facebook): 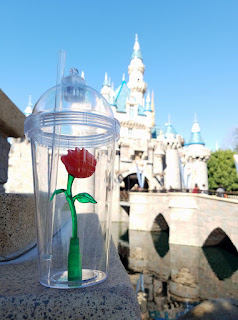 that red rose from the beast's castle was part of the decor inside as i finally got to the front of the line. i'd sent the old lady inside while i waited in the line so that she could grab us a table. 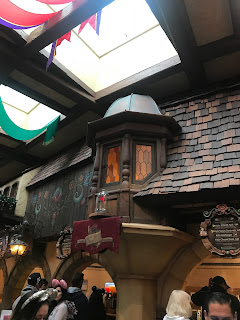 luckily, once i reached the cashier stand to place my order the process went pretty quickly.  it's one of those places where you order and pay and then step up to the counter, present your receipt and your food is served to you on a tray a few minutes later.  the old lady had scored us a pretty sweet table, and i was happy to finally sit down.

she'd opted for the chicken sandwich a la lumiere: 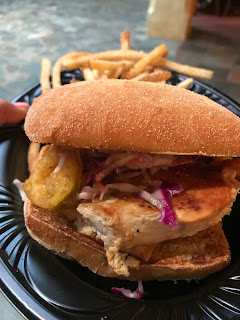 she said it was good, although the chicken was a little dry and there were a lot of different flavors going on in there.  between the fried cherry peppers, the onion bacon jam and the apple slaw, her take was that it was just a little too much.  still, she was satisfied.

i, of course, went big and did disney's version of poutine:  seasoned waffle fries and cheese curds smothered in gravy and slow-cooked beef.  it was...oh, so delicious.  totally worth blowing the diet for. 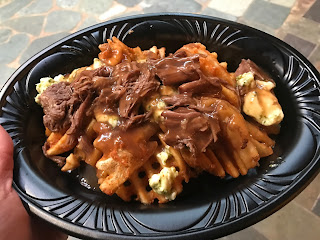 and the one thing we'd wanted aside from that red rose sipper was something we were pretty excited to try.  also a huge seller and sells out early every day thus far, this is what lumiere is referring to when he sings "try the grey stuff, it's delicious!" during "be our guest." 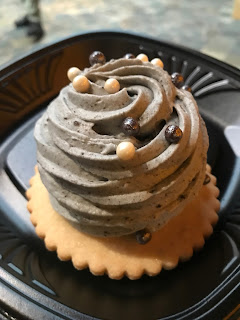 it's a shortbread cookie topped with a swirl of white chocolate mousse that surrounds a chunk of red velvet cake with a raspberry sauce hidden inside.  totally worth the wait, and a definite must-try. 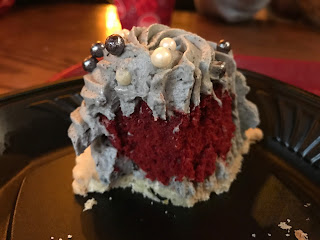 with both of our feet soaking wet inside our uggs and a much bigger crowd in the park resulting in long waits for the rides we'd normally have wanted to do, we decided to head out.  the red rose taverne was all we'd hoped to do that day anyway, and so we got the hell outta dodge. 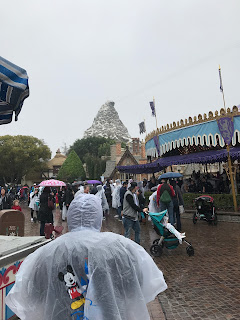 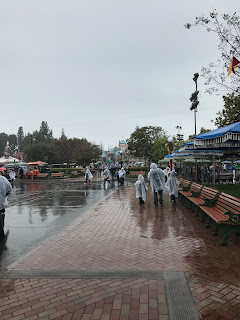 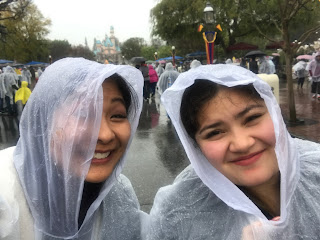 since it was still really early, the old lady made a suggestion that took us a little bit out of the way but was also completely worth the effort.  when the hello kitty pop-up cafe opened last year, we'd tried to wait in line for it once but gave up after about 45 minutes.  yeah, i know.  and i'm sure it's still pretty busy during the weekends.  but not today, friends.  not tah-day. 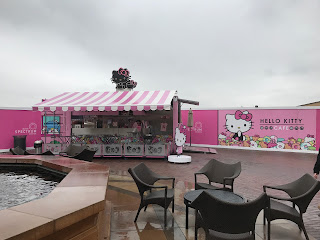 there was literally no one waiting ahead of us, and so we got up there and ordered everything that sounded good, plus some take-home treats for the bean.  the place is just so cute, and i was excited to finally get to try it out. 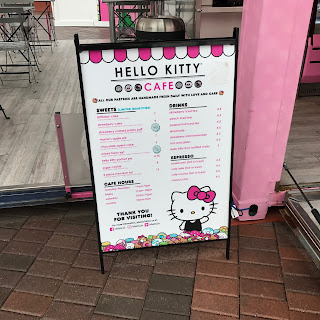 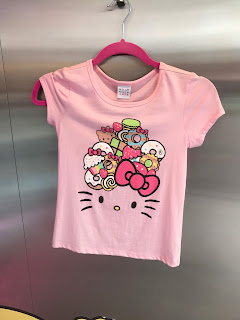 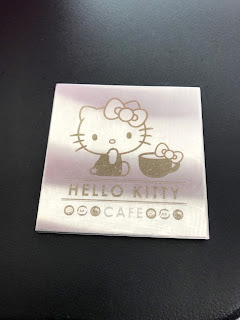 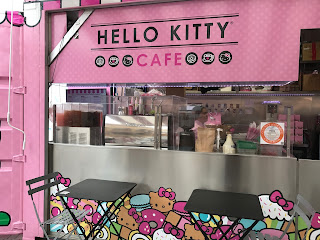 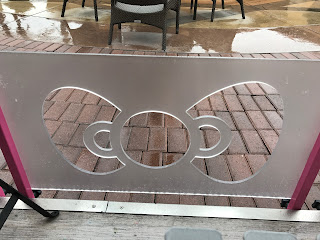 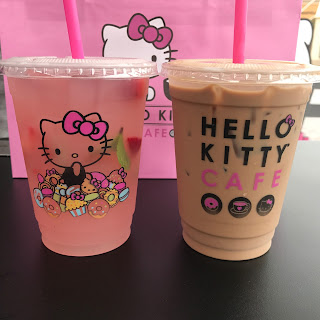 that's my strawberry mint lemonade on the left, the old lady's iced cafe mocha on the right.  hers was definitely a much better choice as mine was insanely sweet, so much so that i only got through a few sips of it.  i was still pretty happy, though: 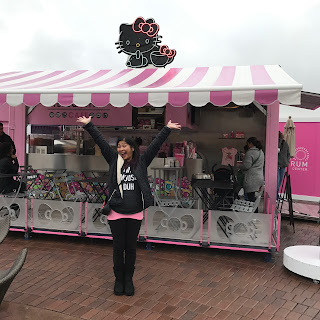 when we picked up the bean from school, we handed her this cookie: 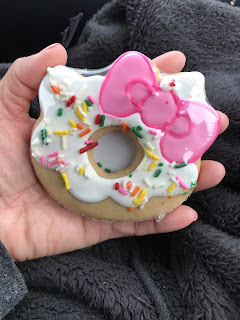 and then later on, at home, we gave her this box and let her have first pick of the cute and colorful macarons inside. 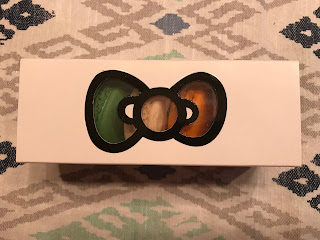 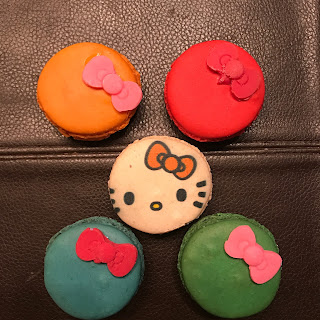 everything was delicious and adorable, and i hope we manage to get back at least once more before their scheduled shutdown in april.  it's pricey, as all things hello kitty are, but what else would you expect?
at March 03, 2017