the bean's third trimester of third grade is going by so fast, it's hard to keep up.  with the last cheer competition of the year done and no spring sports to cheer at, there's nothing left to practice for.  the end-of-season banquet was last week, and the old lady and i attended along with the bean.  she ran off to sit with her friends and we headed over to a table of parents to socialize and get caught up on all the news.

when the awards began, i was pleasantly surprised to hear the coach praise the bean for her positive attitude throughout the season.  i'm not unaware of my kid's optimistic and friendly outlook on life, although i will say that there were definitely a handful of times when she really didn't want to go to cheer practice because she said that the coach did a lot of yelling at them.  heh.  i'm also pretty sure that she wasn't a big fan of the laps they had to run as warm-up or as a penalty if they dropped their flyer during stunting practice.  anyway, it was nice to watch her walk up to accept the award and beam happily with pride. 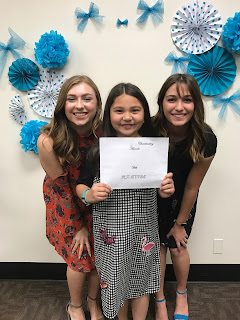 the third grade did a field trip to a local planetarium last week as well, to complement the work they've been doing during science class.  she came home full of information about how they'd gotten to build a rocket and told me all about what they did and how they got to launch the rockets.  since i hadn't been lucky enough to be chosen as a chaperone for this trip, one of the moms was kind enough to send me this picture: 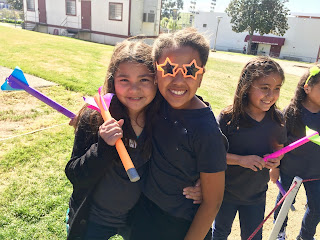 they have another field trip coming up next week to JPL, which i'd heard about last year when her older friends got to go.  i signed that permission form as soon as it came home and checked the "i'm available to chaperone" box in the hopes that i'd get to go too, because a trip to JPL sounds super cool.  alas, luck was not on my side and when the list of chaperones went out i was really bummed not to be on it.  dang it.

about a month or so ago, the bean came home all excited about auditions for a play that the class was going to put on for the school.  everyone would have a part unless they just wanted to be part of the chorus, and she was excited to audition to see if she could get one.  it was a storybook/fairy tale-themed play, so there were all sorts of parts available from princesses to a troll to billy goats gruff.  and i had to stifle a guffaw when she came home with a disgusted look on her face and announced that she'd been assigned to be half of a duo...of rats.  oh man, she was so annoyed.  it was so funny, and i tried to assure her that she would do a great job and would have a lot of fun working with her partner.

they worked hard on practicing those parts, memorizing their lines, learning the songs that they'd be singing.  and then the day finally came for the big performance.  i managed to snag front-row seats for me and the hub, and snapped this when they came in to take their places onstage. 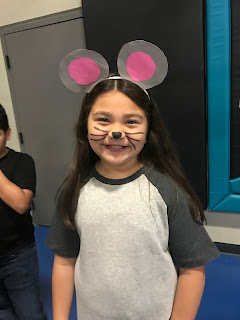 the play was really funny and super cute, and we enjoyed watching them give their all on that stage.  there were a few kids who had surprisingly good singing voices, and i won't be surprised to see a good number of these students in the drama department once they get old enough for it.  they seemed to have a great time during the performance, and were rightfully proud of themselves when the play came to an end. 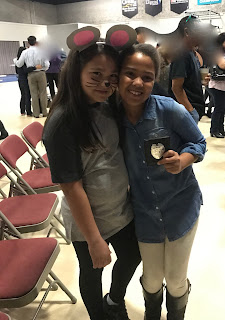 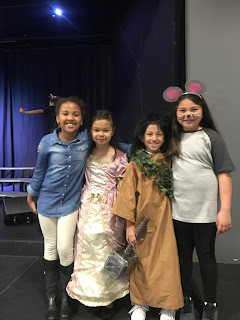 of course, we had to get a quick selfie with our little rat before she had to get back to class. 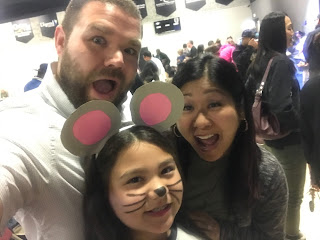 they're doing standardized testing all next week, and then they'll have spring break not long after that.  when they get back to class after break they'll have about a month left before the last day of the year comes, just before memorial day.  this year has definitely flown by...i can't believe i'm already having to think about summer plans.  seriously, time needs to slow down.
at March 28, 2017