the bean's cheer squad had their final competition last weekend, way out in murrieta by a company i'd never heard of.  turns out this was only their second competition, so it wasn't very big.  this didn't mean that it was going to go any faster than other comps though, because they made sure to let us know during their welcome announcements that there would be a large gap (at least 5 minutes or so) between performances.  you know, so the their judges could have as much time as they needed to really focus on all of the things they had to deliberate on...ersumshit like that.

my friend, whose daughter is one of our flyers, made these super cute bows for the girls to wear for the last comp: 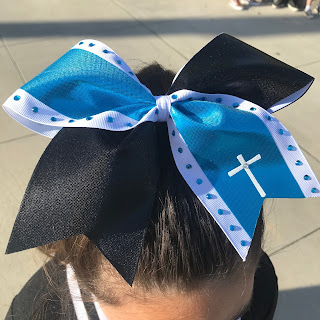 and this was our view for several hours. 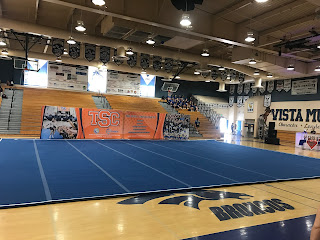 i managed to catch this shot of the bean and her cheer BFF before they went on: 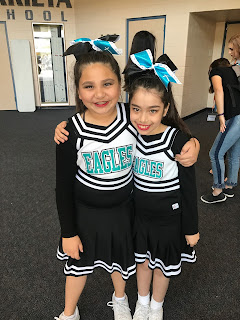 their sign placement was pretty comical.  unintended, i'm sure. 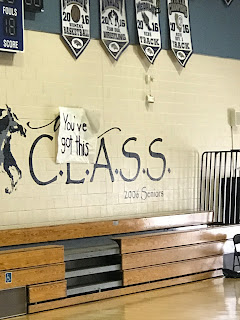 they did a great job.  at least we all thought so.  the youngest squads in the whole competition, i heard a lot of "oh, wow"s and "they're so small!" amongst the crowd.


after we came back from lunch break, we found a few of our friends coming back through the parking lot. 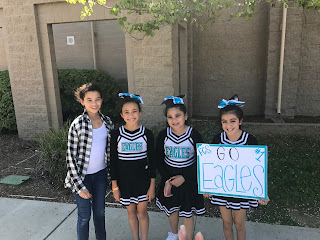 with no competitors in their category, the girls were basically just performing for the judges for evaluation.  they ended up scoring fairly low - just 69 points.  they had originally been told that they would take home a $100 cash prize considering they were the only ones in their division, but when score sheets were distributed we learned that they'd had to score 70 points to earn the prize.  seems kind of shady to me, but whatever.  in any case, the bean got to take down that high cheer ponytail and change into the outfit her daddy picked up at a nearby target.  she was much happier and very comfy after spending the warm day in those polyester sleeves: 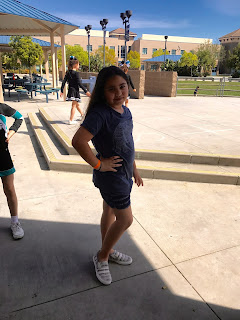 and now we're on cheer hiatus until june, when she starts practicing with her new squad.  in the meantime, i'm trying to get her spots for private tumbling classes with one of the coaches.  she's already been once and it's clear that her skills are still there, just a little rusty.

we'll get there.  maybe we'll even get her to do a back handspring one of these days.  that would be so awesome.
at March 22, 2017