for the first time in a long time, we actually have several weddings to attend in 2017.  the first was brother wan's last month, and this past weekend we got to watch one of my cousins marry her longtime boyfriend in a beautiful ceremony at the mission in san gabriel.

the bean was not in a good mood and refused to participate in my car selfie shenanigans. 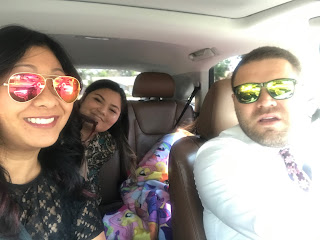 we arrived at the mission just in time - the bridal party was already lined up at the entrance, and we had just enough time to make our way inside and find a seat.  in our haste, we somehow ended up sitting in the back of the church on the groom's side.  oh well. 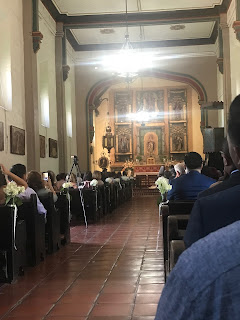 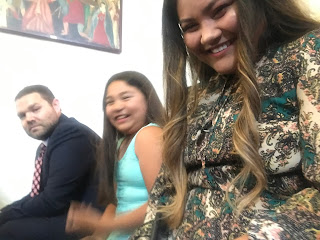 it was a full catholic mass on a super hot day.  i felt bad for the hub and all of the other guys who were wearing jackets with their shirts and ties.  the bean whispered something to her sister, who in turn leaned over and told me "oy, she has to go potty."  she shook her head at me when i looked at her and mouthed "i can hold it!" but we found a quick moment during the ceremony that was just right to jump up and head out the side door in search of a restroom. 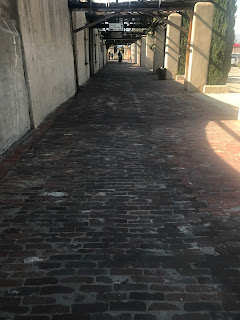 i was really excited for the reception, which was being held at los angeles' union station.  i'd never attended nor heard of a wedding hosted there, and i figured that it was probably in the ballroom that was being restored last summer.  we'd seen it during one of our summer gold line expeditions, and i thought it was just the coolest spot possible to celebrate a new marriage. 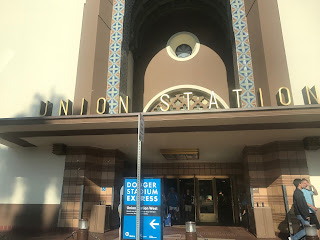 parking was dreadful that afternoon.  there was a dodger game that evening, and so hordes of folks were arriving and making their way to the shuttle that would take them to the stadium from union station.  after circling a few times and learning that the valet wasn't available to us since it was scheduled to close at 9:00 that night, we finally managed to find a spot off to one side of the building. 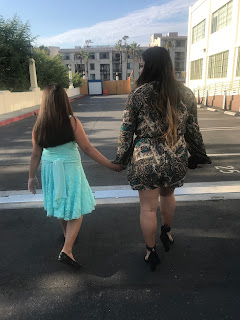 since we were early, we made a quick pitstop at the starbucks inside the station.  the old lady and i both needed a pick-me-up and an iced espresso drink hit the spot.  and then we made our way to the reception...which was exactly where i'd thought it would be. 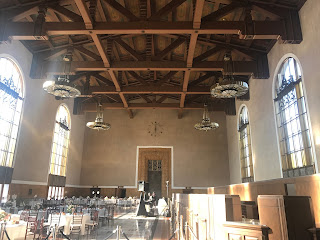 we found our seating assignment and signed the canvas that was serving as the couple's guest book. 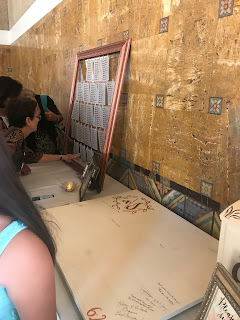 oh, did i mention that i'd sewed up the bean's dress and the lace top i was wearing?  i was pretty excited to rock some made-by-me gear for a dress-up occasion. 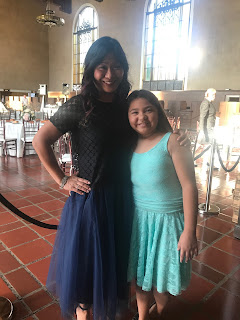 the bean excitedly reunited with her favorite playmates, my cousin's two daughters. 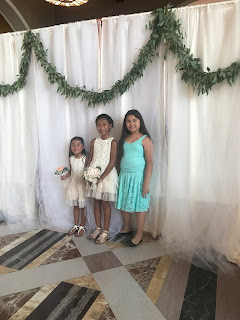 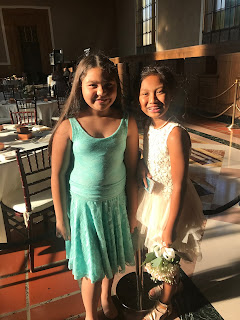 she promptly disappeared for the next hour with them as we hit the bar. 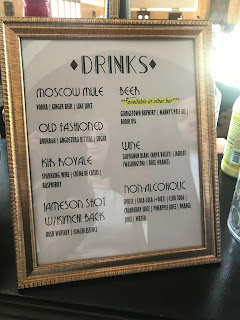 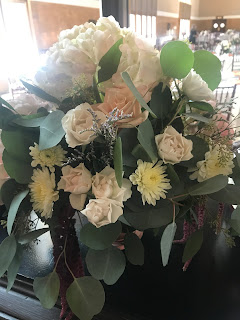 although she came back briefly to take a few group photos with us. 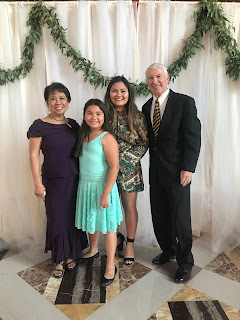 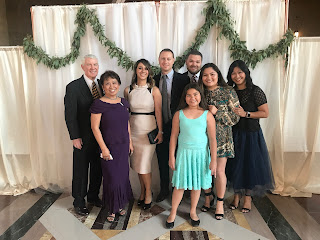 i really wanted to get a family photo of the four of us, but the hub was not having it.  i'm chalking it up to the heat being super uncomfortable in his jacket and tie.  i scored a bunch of selfies, though. 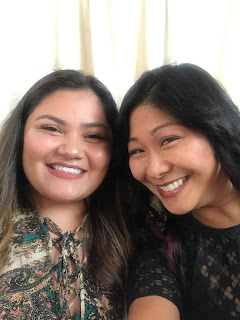 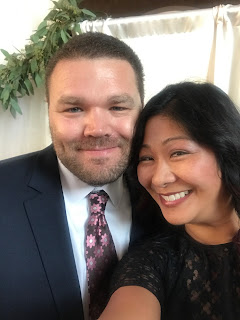 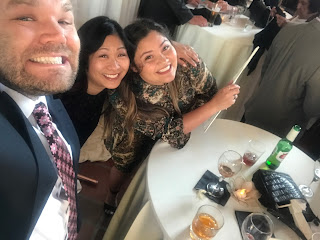 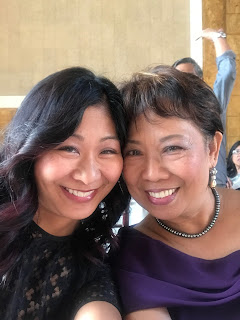 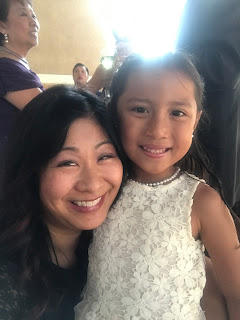 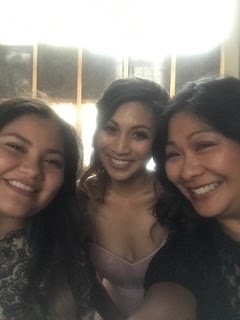 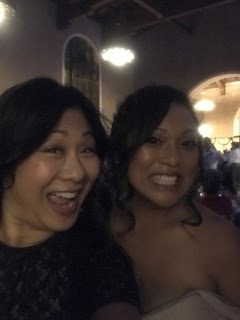 because the room was already so pretty on its own, there was no need for a ton of decorations.  the tables were adorned with a handmade table number, a floral centerpiece, place cards and favor boxes. 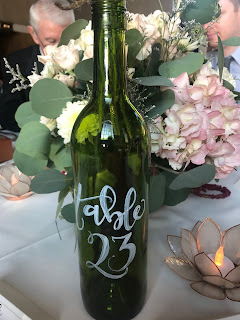 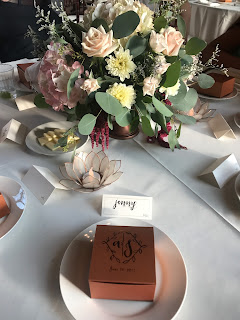 and inside those boxes?  pieces of delicious see's candy. 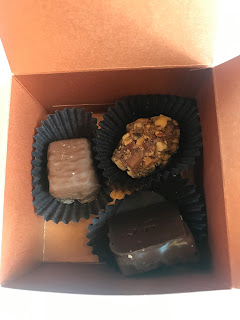 the meal was being catered by lawry's prime rib, which is a favorite of the bride's (and ours).  we hadn't been there in forever, although i've used their recipes at christmases past.  dinner started off with a bread basket and their famous spinning salad, which was delicious: 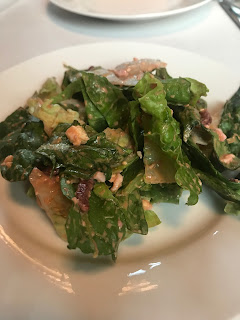 i mowed right through that and then hoovered up my entree with a quickness.  it was so good, and now i want to go back to lawry's and have some more. 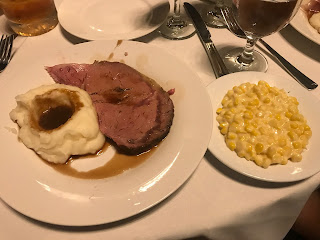 it had been a long day and the bean was practically falling asleep at the table, but as soon as the music started and her cousins came over to claim her, she disappeared again.  i found her tearing up the dance floor, and she'd definitely caught a second wind.  i'm a terrible dancer and don't really go out there much anymore, but i got caught up in the fun too and ended up burning a bunch of calories of my own. 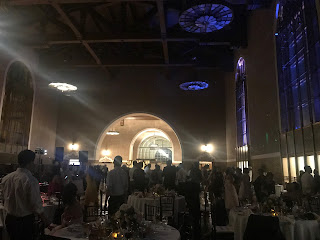 we noticed later that the disco lights and shadows of the dancers could be seen from outside, and it looked really cool.  i'm sure there were folks who were coming and going from union station who noticed and probably wondered what the hell was going on in there.  heh.

before we finally wrapped it up and headed home, my cousin r rounded up the rest of us to do our traditional cousins group photo.  i think we do this at every wedding we attend together. 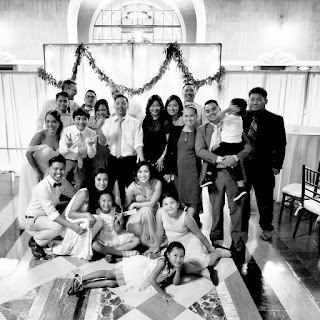 this means we'll get at least one more of these photos this summer, with one more cousin getting married in santa barbara in august.  that'll be super fun too, and i can't wait.
at June 29, 2017