only in la la land

when it was announced that the hollywood bowl would be doing a screening of "la la land" with a live orchestra, the old lady and i marked the date on our calendars and hopped online the second tickets were available.  we settled on tickets up in the cheap seats section and figured we'd have a great time no matter where we sat.

after a bit of debate between the various ways to get there, we settled on going the park & ride route.  tickets were still available online and all we had to do was drive ourselves to pasadena and hop onto the bus that would take us straight to the bowl.  easy peasy.

of course, it was super crazy when we got there and after sitting in a little traffic trying to turn into the parking structure, we got out of the car and joined the line that wrapped around the block. 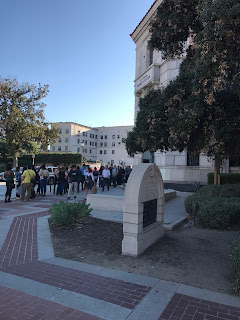 i always love looking at the pasadena city hall building.  it's so pretty, and there were several wedding and quinceanera parties there taking pictures out in front. 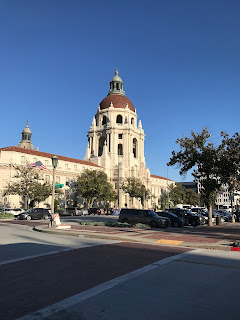 after about half an hour of waiting in line, we were finally on the bus with seats almost at the very back.  whatever, at least we were sitting together. 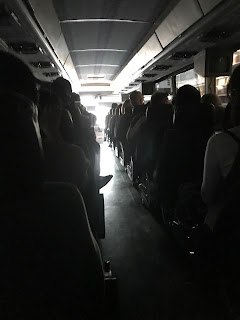 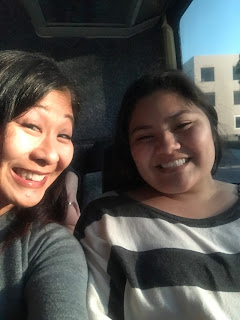 we pulled up at the bowl about half an hour before showtime. 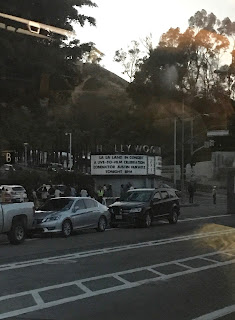 there were tons of people milling around out front, enjoying food & drink that they'd packed, standing in line for the photo ops, looking at the movie costumes that were displayed.  the old lady has little patience for such things, and so we snapped a selfie in front of the backdrop during a quick moment in between other folks. 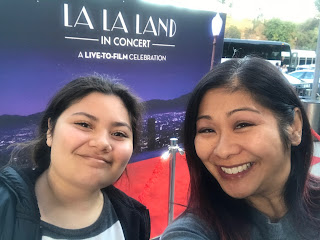 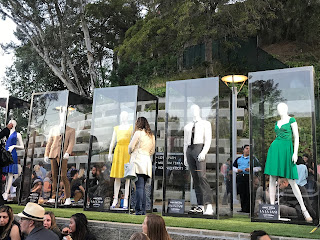 the lines were crazy long to get through security, scan tickets and make our way to our seats.  upon the advice of staffers trying to keep everyone in line, we veered off to the far right and walked up the hill to get around to the west entrance.  it was where the valet parking lot was, and where we've entered the bowl the last few times we've gone.  not too many people wanted to walk up the hill and we got through there in no time. 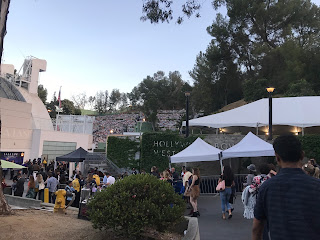 souvenir tees are our thing, so we stopped at the merchandise tent to snag ours. 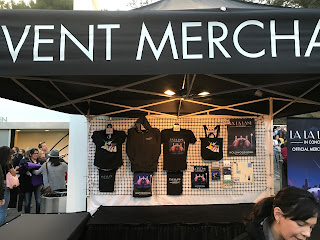 there was a similar photo op back here, but the line was just as long as the one out front. 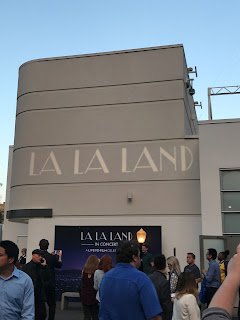 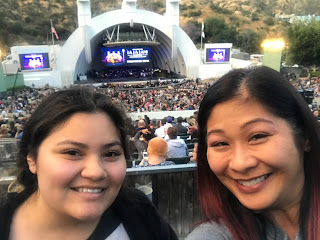 our seats were definitely the cheap ones.  we were pretty much as high up as you could possibly get, with less than 10 rows behind us.  we were so far that the screens, which had always seemed more than adequate in the past, looked teeny-tiny. 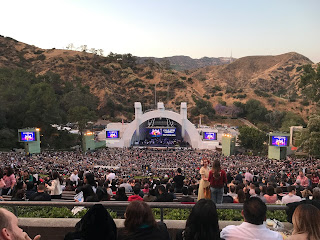 now, we're not really megafans of the movie - we'd just seen it once and enjoyed it.  so we were super amused at the sold-out crowd who screamed and clapped and swooned at every name that was introduced.  i vaguely recognized the names of the composer and the director of the movie, but that was about it.  the show began with the original overture that was apparently scrapped from the movie, and the composer was super proud to tell us that, aside from the audience from the night before, we were the first to hear it.  yay. 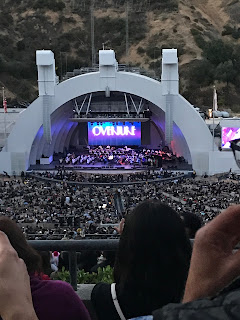 it was kind of cool to (sort of) see the movie's dancers and hear some of the singers from the original soundtrack.  the dancers performed during the opening sequence, and wore their costumes from the movie as they did so. 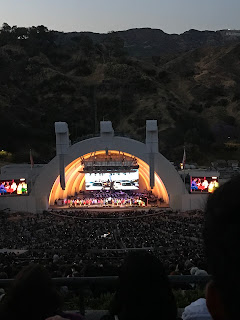 there was lots of clapping and cheering during this scene. 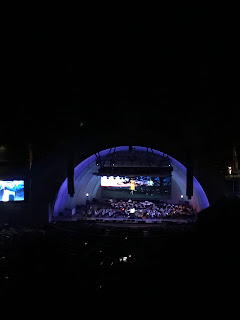 the first of the fireworks came just before intermission. 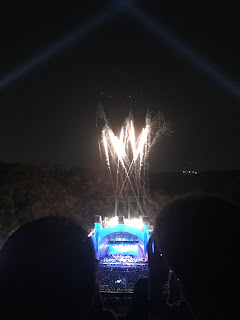 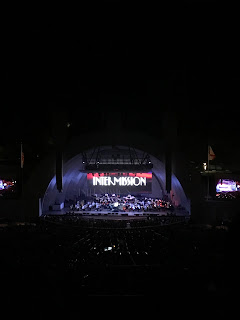 and it was right about this time when we caught our first whiff of the mary jane.  it was super strong, and it caught everyone's attention.  the old lady and i huddled under our blanket while we snacked on the trader joe's goodies we'd brought with us.

i liked how they would project parts of the background onto the front of the bowl while the movie played, and sometimes they'd light it up in the colors used onscreen.  it made for a fun effect that added to the experience.  and during the montage where emma stone and ryan gosling are shown in all sorts of l.a. landmarks, they displayed where everything was.  i missed the first couple, but i managed to catch some of it: 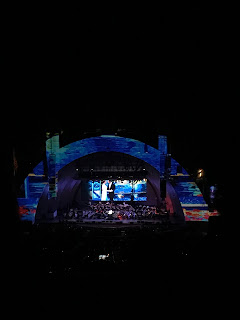 and then we were treated to a much longer, more elaborate fireworks display that spanned the length of the closing credits. 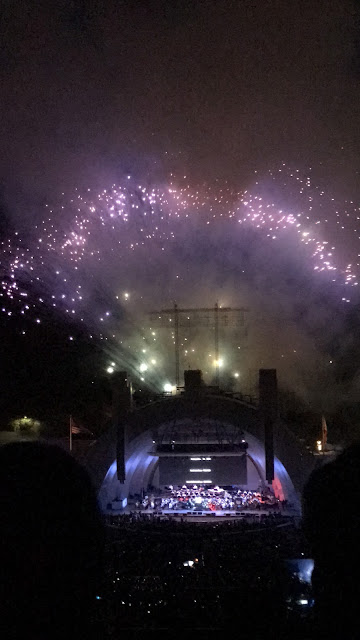 there was so much smoke in there when it was over, it totally drowned out the weed smell.

trying to get back down to the lower level after the show was frustratingly slow.  we've been caught in the crush many times before, but because we were up so high and it was a completely sold-out show, it took us forever to get back to where the shuttles were waiting to take us back.  the directions we'd been given when we got off at the beginning turned out to be wrong, and we ended up doing a lot of extra walking to find where the buses to pasadena were picking up.  by the time we got there, the line was only about 15 people long for the very last bus to take us back.  had we gotten there maybe 5 minutes later, we'd have missed it completely and then we'd have been screwed.  so annoying.