we've been talking about going to a drive-in movie for ages, and actually had planned to do it the other night with one of the bean's friends when we had her over for a sleepover.  like, i packed the blankets and chairs into the trunk and everything.  but then we all got distracted with chatting and hanging out and the time just kind of flew by and then before we knew it, it was too late to go.

MIL arrived yesterday for a quick 24-hour turnaround trip to scoop up the bean for their annual weak-ish long "grandma camp."  with no real plans for the one evening she'd be here, we finally got to fulfill our drive-in movie dream (but not before a quick pitstop to pick up a costco pizza to munch on).

there aren't a lot of drive-in theaters left around here, but the old lady had been to one in nearby montclair and suggested that we go there.  it's been there for years, got run down and then renovated a few years back and offers four different screens, each with a double feature with sound transmitted through your car radio. 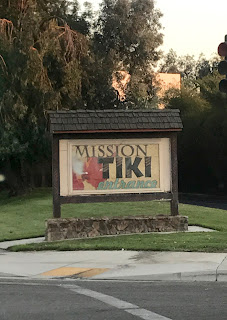 when you pull in, you drive up to these little booths where you pony up $9 per adult and $1 for kids up to age 9.  not a bad deal, especially for two movies. 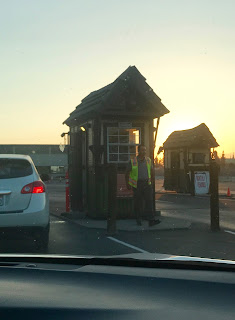 the attendant hands you a receipt with your screen number and the FM station you'll need to tune into so you can hear your movie, and then you follow the signs to get to the right screen. 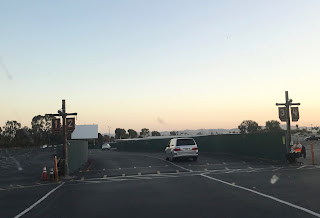 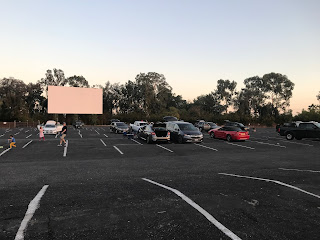 we decided to park several rows back and then headed over to the snack bar to check it out and hit the potty before showtime. 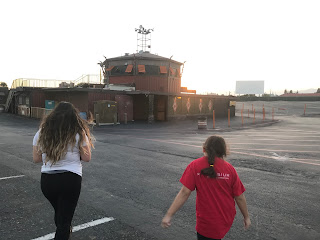 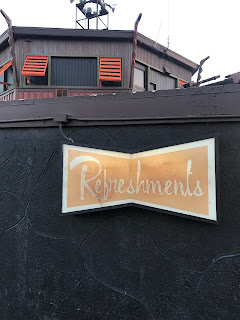 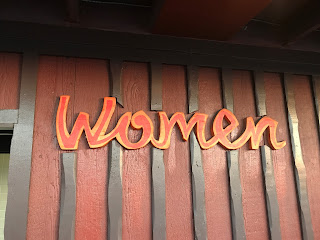 they had a bunch of these scattered around to go with the tiki theme they had going on. 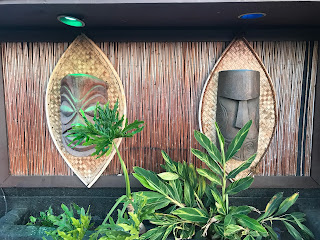 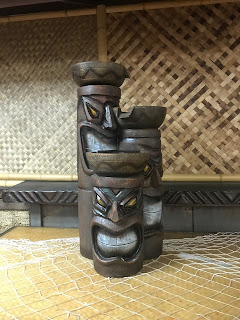 the snack bar offered everything from pizza to funnel cake to popcorn to cheeseburgers and burritos, and then there was a small seating area available off to the side. 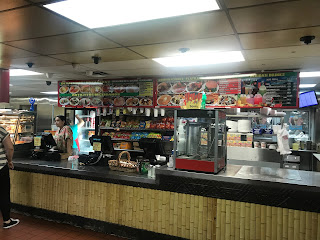 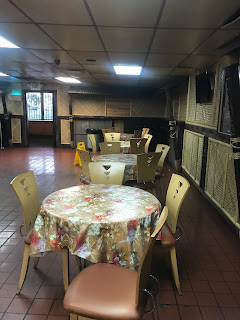 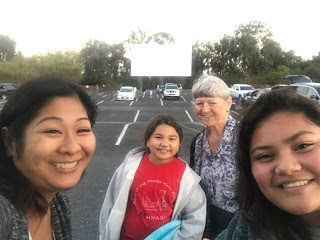 we left the trunk door open and set up chairs in front of it, with plenty of blankets to keep us warm.  it was actually a little chilly that evening, with a pretty consistent breeze that didn't stop the whole time we were there. 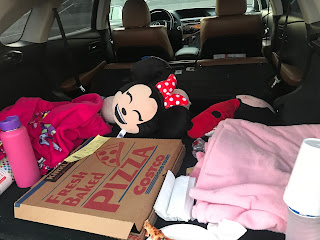 the movie started right on time, after just a few trailers.  we were there to see - what else? - a disney movie.  cars 3, to be exact. 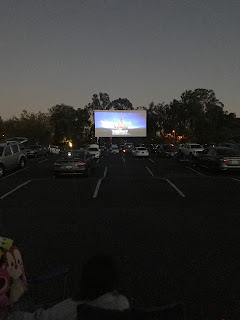 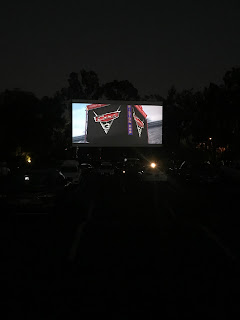 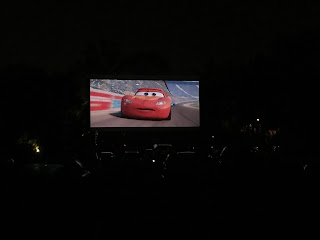 except that the radio in my car shuts off automatically after about 10 minutes, to conserve battery power.  bleh.  good thing everyone else had their radios blaring and we could hear the movie just fine without having to use our own juice for it.  the movie was really cute too, and i actually think it may be my favorite of the three.  i for sure liked it more than the second one, and the bean concurred.

because we hadn't gone back to the snack bar for the funnel cake we'd been eyeing earlier, we decided to look for somewhere to grab some ice cream.  a quick search on yelp told me that there was an afters ice cream shop at the shoppes at chino hills.  that's not too far from where we were, so that's where we went. 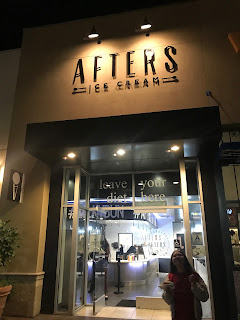 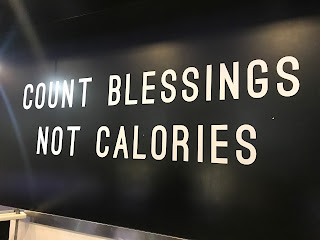 the specialty at afters is their milky bun - basically a hot, fresh donut that they stuff their housemade ice cream into. 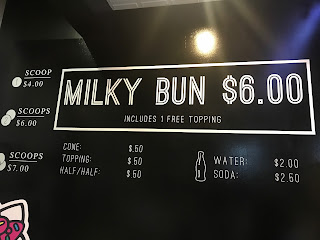 even better, though, was the fact that they were doing a hello kitty collaboration that had just started that very day. 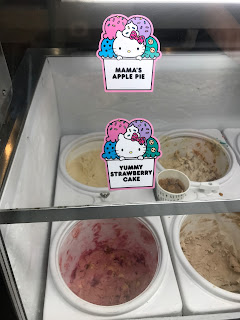 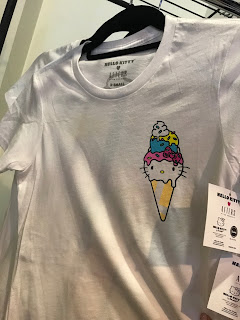 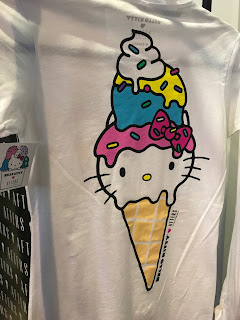 the old lady tried the "yummy strawberry cake" flavor and said that it was really good, but then she was led astray when she spied the peanut butter s'mores.  PB and chocolate is her biggest weakness, and so she ordered it in the milky bun with some rainbow sprinkles as her topping. 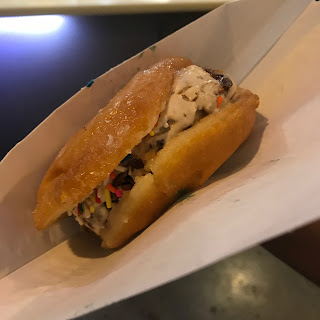 MIL opted for the acai blueberry with mochi on top. 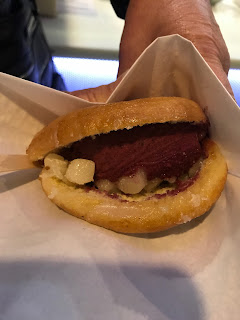 and the bean went for the cookie monster ice cream with mochi. 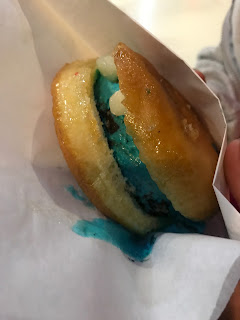 i got her to pull her face out of her ice cream just long enough to take advantage of the photo op: 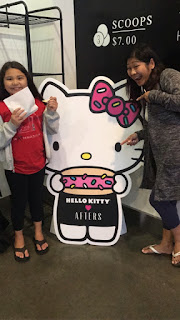 and then we hopped into the car and headed home.  super fun summer evening, and today she takes off with her grandma to texas for ten long days.  confession:  with her not being in any sort of day camp this summer, we've kind of been getting on each other's nerves a little.  i'm already missing her (even though she hasn't actually left yet), but i know the break will be good for both of us.  and grandma camp is something she looks forward to every year, so she's going to have a blast.  i'm glad that it's something she gets to do, and i can't wait to hear all of the stories she'll have to tell when she gets back.