social media came through for me once again, as the bean and i were lucky enough to secure a couple of seats for a special advance screening of "despicable me 3."  our friends lilcee and mini cee were able to score seats too, and while the old lady did the same she and her special friend opted not to make the trek out to century city with us.  i guess date night is more appealing than hanging out with your mom and her friends...psh, whatever.  heh.

driving out to the west side on a weekday afternoon is always a little challenging.  starting from the time we left our house to picking up lilcee and mini cee to parking and joining the already-long line for the movie took a total of two hours.  sheesh.  and we knew there would be a plethora of folks there early...after all, nothing brings in the crowds like an exclusive-sounding freebie.  i can't really trash talk since clearly i'm usually all up in that mix too.

while i got in line, lilcee took the girls to the restroom and then to pick up some waiting-in-line snacks. 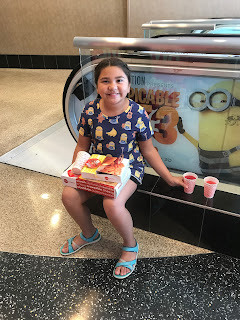 it took awhile for us to finally get to the front of the line, as they were rather unorganized and not actually checking the confirmation sheets we'd printed out at home.  they were letting 20 people in at a time though, and then as we got inside the theater we realized that there were staffers who were seating people as they came in.  we typically head towards the very back of the theater, but with all of the other folks in front of us in line already seated we were given spots a lot closer to the screen than we're used to.  but it wasn't too bad, and this was our view: 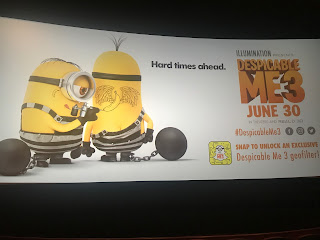 much excite.  you like our matching minions shirts?  the lady next to me seemed to, because she asked us where we got them.  i always feel an odd mixture of pride and embarrassment when i get this question and answer with "oh, i made them."  like, i'm totally proud of being able to make wearable clothing and that i often have some pretty awesome fabric for whatever occasion we're dressed for, but i don't really want to be all braggy about it either.  you know? 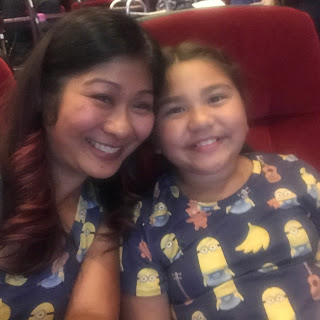 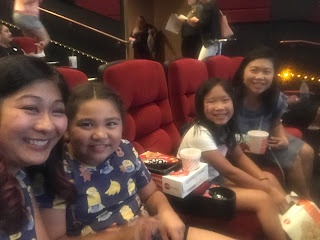 i almost never see a movie without hoovering up an order of nachos all to myself.  yeah, it's a box of basic tostitos chips and some melted cheese food, but it's delicious and i love it. 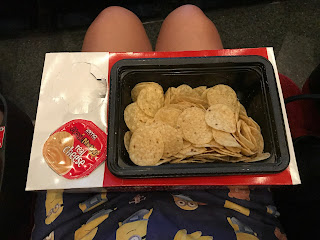 i'm not going to drop any spoilers about the movie itself, but what i will tell you is that it's super cute and i'm pretty sure it's my favorite out of all the "despicable me" movies, including the minions one.  it has a fun story, great music, and just the right amount of gru/lucy/girls and minions in it.  i'm even willing to go again and watch it with the old lady when it comes out on june 30th. 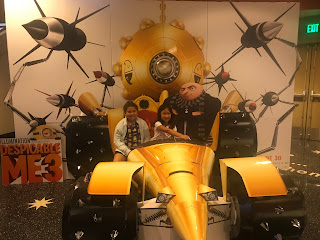 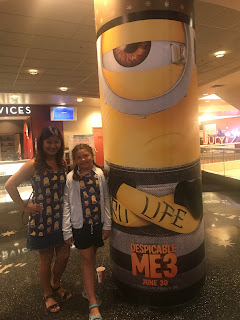 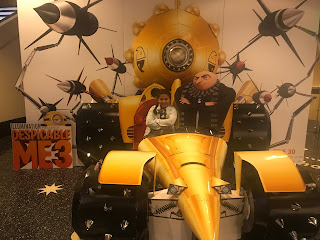 and then we capped off our super fun evening with my first trip to shake shack. 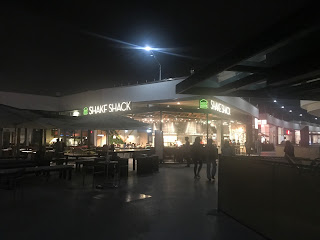 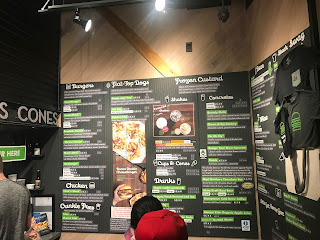 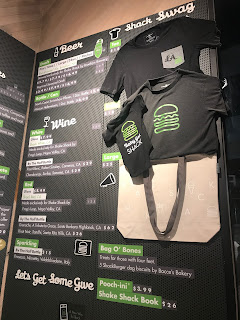 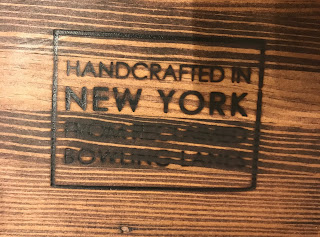 after consulting with lilcee, i decided to go with a simple shack burger, an order of their bacon cheese fries and a "concrete" frozen custard dessert.  YUM.  the buns are super soft and delicious, the patties are perfectly seasoned and it was a really, really good burger overall.  and who doesn't love a good crinkle fry? 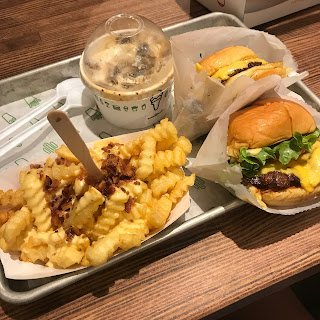 as for that concrete (i keep wanting to call it "cement"), it was crazy delicious.  i was actually really full from the nachos, the burger and some fries, but it's frozen custard and it's not like i could've saved it for later.  this was their "beverly chills" flavor - vanilla custard with salted caramel sauce, chunks of dark chocolate and toffee and malt mixed in.  so so so good. 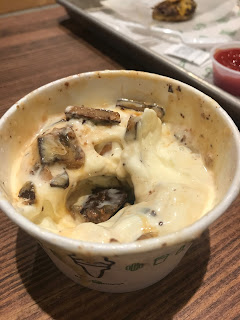 such a fun evening!  it's always a good time with lilcee and mini cee.  we'll have to see what other summertime shenanigans we get into as the weeks go by.
at June 23, 2017