an evening of movie magic...and donuts

every so often, universal studios sends emails to their annual passholders offering fun perks, like bonus days that would normally be blackout dates, extra hours in the park, sneak peeks for new attractions.  and so when we got one offering us a special preview for the new "nighttime lights at hogwarts castle" experience, we logged on right away and snagged tickets for a tuesday evening.

one of my friends hooked us up with a handful of all-day validation stickers for the valet parking lot, which was pretty awesome.  the lot is located right underneath the entrance to the park, so it's super convenient. 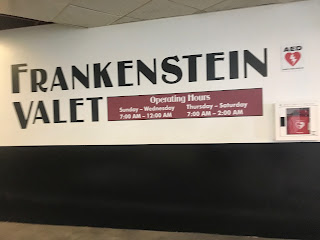 we stopped for a quick selfie photo op on our way to the gate: 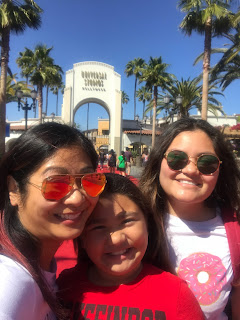 and then we found signs pointing us towards a box office where we were supposed to check in for the event.  the line was pretty long though, and one of their staffers told us that we could go inside the park and there would be a check-in table there where the wait would hopefully not be as long.  she wasn't totally clear on where the table was though, so we headed to the guest relations office once we got inside.  the employee at the counter, hannah, was really friendly and helpful and told us that she hadn't gotten to see the light show yet but had heard great things about it.  then she walked us back outside and pointed out to us where the check-in table was and we went on our merry way.

there were three showings available, and because it was still fairly early we were able to secure wristbands for the first one at 8:40.  along with those wristbands we received a coupon for 20% off in any of their retail stores...and you know how much we love our merchandise.  woohoo! 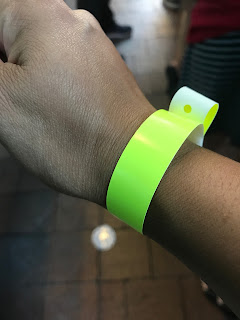 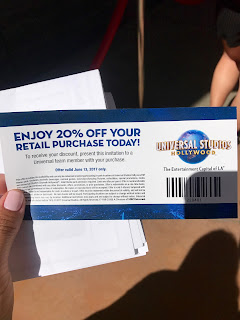 the girls were hungry, so we headed off in search of some grub.  we walked through the harry potter area first and looked at the menu at three broomsticks, but it seemed to be set up as a family-style restaurant with meals created for a party of 4.  maybe next time.

instead, we ended up grabbing some food at luigi's near the simpsons ride - some spaghetti with meatballs and chicken alfredo that we shared.  it was surprisingly tasty, with generous portions and reasonably priced to boot. 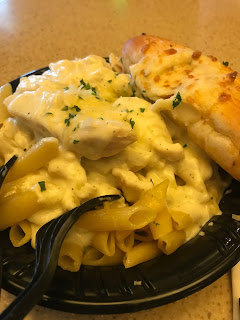 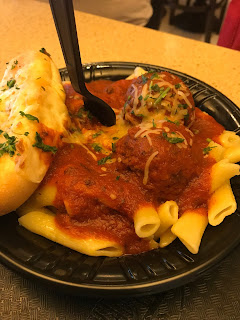 the dining area at luigi's was crowded, so we headed across the way into krusty burger and found air-conditioned seating upstairs. 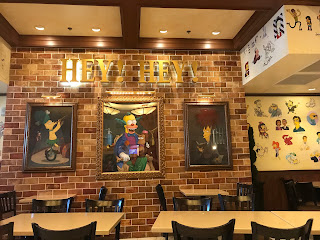 with full bellies, we decided to take the tram tour.  it's always fun and the wait was pretty short compared to other attractions in the park. 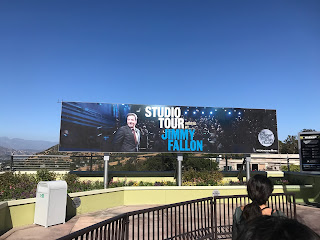 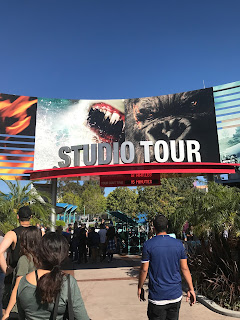 we were on a tram in no time.  of course, we managed to get seated next to the family of five...which consisted of two bewildered parents who did absolutely nothing about the volume of screaming their small children did throughout the entire tour.  yaaaaaay. 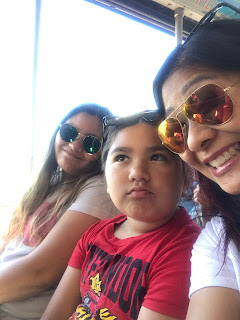 this photo op used to be more prominently displayed on the upper level, with one of their paid photographers available to sell posed shots.  i guess it's more of a DIY-type deal now, but i'm not complaining. 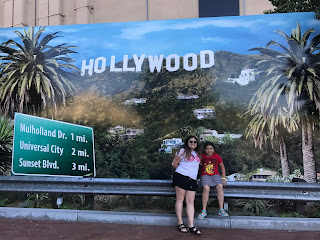 the lines for the other rides in the park still had significantly long lines...but the line for the tram was down to almost nothing.  and so although we'd just gotten off, we decided to do it again.  haha!

this is not an attraction that you'll catch any of us in, because we're scaredy-cats who don't like haunted houses, getting scared on purpose and being touched by other people. 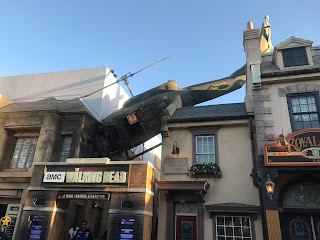 we went back to harry potter land so that the old lady could pick up a treat she'd been looking forward to all day. 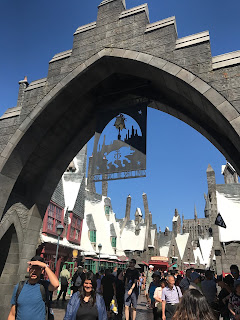 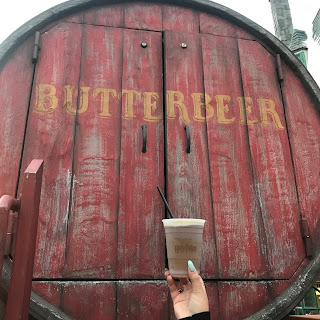 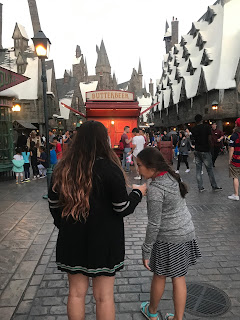 and by then, the light show was about half an hour away and people had begun gathering in front of the castle.  the park was scheduled to close to the public at 8:00 that evening, and most of the shows and restaurants and things were already shut down for the night.  and so we decided to snag a spot and wait for the show along with the 1338475093874 other passholders. 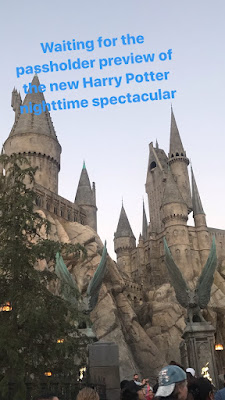 so maybe it's because we've been spoiled by the magical extravaganzas that the disney imagineers have created, but we were really underwhelmed by this "show."  there wasn't much to it, and it was over almost as soon as it started.  definitely not something we would wait any amount of time for ever again.


we snagged a few more photos before making our way towards the exit. 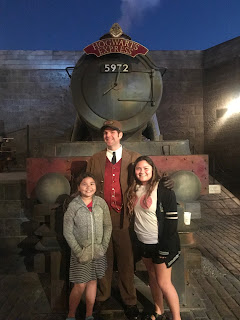 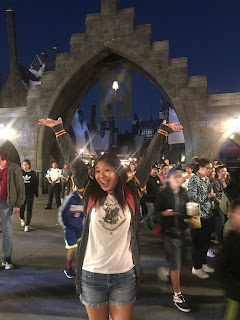 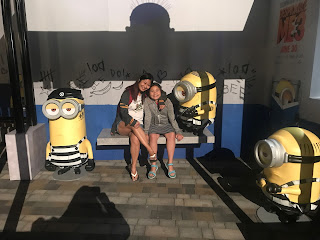 and then we remembered our 20% off coupon, good only for that day.  so we went into a couple of stores and looked around for a bit.  the bean was excited to show us these, because she knows how much i love hello kitty and the old lady adores the "back to the future" movies. 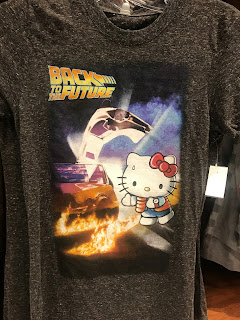 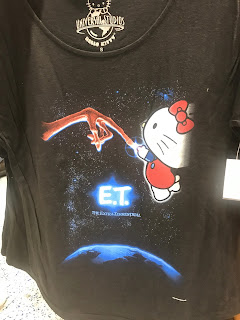 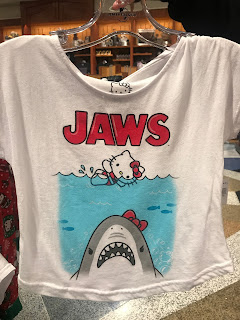 in the end, we decided to find a family to give the coupon to.  there wasn't really anything that stood out that we HAD to have, and we'd spotted the cutest little harry potter fans oohing and aahing over the display of magic wands.  it was fun to watch the delight on their tired father's face when we handed him that coupon, and he thanked us profusely as his kids lit up at the realization that they were going to get to take one of those wands home.

since the show hadn't lasted very long, it wasn't terribly late by the time we went through the exit turnstiles.  and there was one place out in the citywalk that we really wanted to hit up... 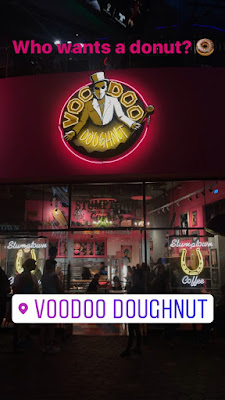 and wouldn't you know it, a few seconds after we got in line one of their employees came over to tell us that we would be their last customers for the night and closed the line right behind us.  phew!

i don't actually know how long we waited, because there were quite a few people in front of us, but we amused ourselves peoplewatching and making a quick run to the restroom with the bean.  and then we were finally inside: 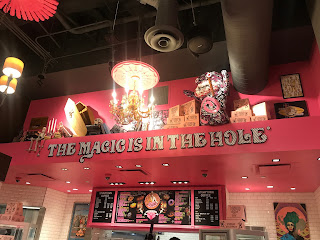 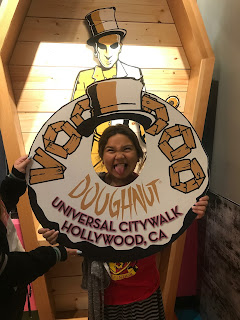 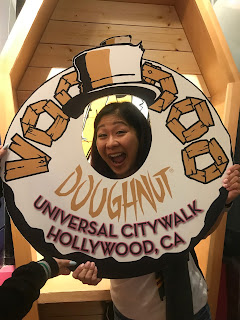 we were a little worried that we wouldn't get any of the flavors we wanted since it was so late, but somehow they were all magically still available.  we did the grape ape, voodoo double bubble, tangfastic (which is a cake donut with orange tang powder sprinkled on top of the vanilla frosting), a no-name (chocolate frosting and rice krispies topped with a peanut butter drizzle), chuckles (chocolate frosting dipped in mocha powder, peanuts, drizzled with caramel and chocolate), and a glazed blueberry cake donut i knew the hub would like best. 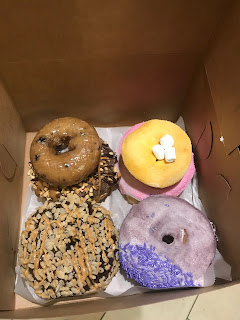 the valet closes at 10 (there may be just one or two of you who'll chuckle at that), but the attendants were super friendly and offered us fresh coffee or bottles of water for the ride home.  it was really nice to have the car brought to us, and the entrance to the freeway was minutes away.