so i've had my embroidery machine sitting in the house for two years now and i've really neglected it.  like, a lot.  like, i think i've really only ever used it for two projects.  eek.

and then the bean came home with her new cheer backpack and the team decided not to have their names embroidered on them this year.  this would be fine except for the fact that i remember during several competitions last year there were lots of backpacks left in seats and it would have been a little hellish to find their owners had their names not been stitched right on them.  but i definitely don't have enough confidence to embroider onto the backpack myself, and i can't bring myself to find a vendor to pay to do it for me.  especially knowing that i have a perfectly good machine just a few feet away.

so i thought maybe i could just embroider some sort of a tag or something to attach to the top handle of the backpack, making it easier to identify hers out of a pile of identical bags.  i started looking around at various embroidery file design sites and came across a really cute little nameplate style that was stitched on embroidery vinyl, cut out, with a snap at the top and attached to a keychain.  i started watching videos and looking at designs and fonts and things, and realized that it was a pretty easy little project that could get me interested in my machine again.

i ordered some supplies from an etsy shop and amazon, bought a couple of design files and sat down and watched the tutorial video again.  i went fishing around the house for the supplies i'd gathered together when i first bought the machine, put some stabilizer in the hoop and threaded the machine. 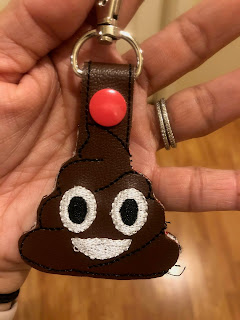 i mean, never mind that i trimmed the vinyl a little too closely on one side and accidentally snipped off the stitches.  oops.  the stitching definitely wasn't perfect, and i need to sharpen my little trimming scissors, but i guess it wasn't terrible.  until you flipped it over and saw the disaster on the back: 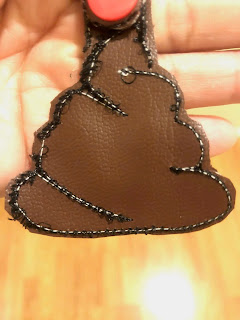 ugh.  thread all over the place, bobbin thread pulling up and out of the lines, just a hot mess.  still, it was good to get through the process and see how easy it really is - the machine does 90% of the work.  and so i decided to give it another try, this time using a different design that i knew the bean would adore.

except that for some reason, now the bobbin thread wouldn't catch and the upper thread did this horrible bird nesting thing that snarled underneath the project and in the machine.  UGH. 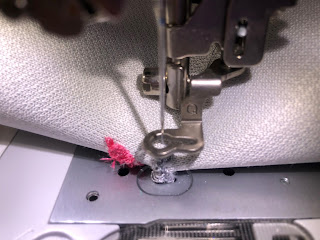 i put out an SOS to my co-leader, who does a lot more embroidering and has the same machine as mine.  i described what was happening, told her what i'd tried to fix the problem, and she suggested that i try a new needle, rethread top and bottom threads and make sure there wasn't any loose pieces of thread stuck in the bobbin case.  after i checked and double-checked all of those things, i gave it another try and had the same problems all over again.

i was so frustrated, i had to turn the machine off and walk away.  she promised to come over and take a look to see if she could help me with troubleshooting, and when she sat down and threaded the machine with a spool she'd brought from home and snapped the hoop into place - well, of course the machine behaved.  it did exactly what it was supposed to, and so we decided that what i really needed was to stop using the crap thread i'd bought from amazon and replace it with a reputable brand from joann's.

i was excited to give it another shot, and i replaced my needle and threaded the good stuff into the machine before snapping the hoop back in and pressing the start button.

and then i was pissed off all over again, because not only was the bobbin thread still not catching, but the birds nesting thing was even worse and it got stuck under the needle.  once i snipped it free, i flipped the material around to give it another try and made the machine power through the rest of the design without changing thread colors.  this is what i ended up with: 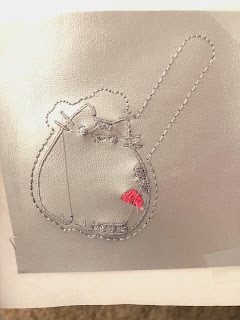 aside from the extra threads that needed to be trimmed, it doesn't look completely awful, right?  well, sure...until you flipped it over and saw the back.  birds nest city here, people. 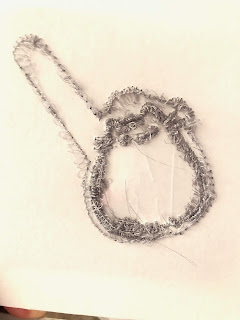 there were lots of words being muttered under my breath, and i was so mad i had to walk away again.  i took some time to cool down while making dinner, and then i decided to take the upper and bobbin threads out, inspect the bobbin case and then restart the machine and rethread it again.  i'm such a glutton for punishment.  i made the machine power through the design again, this time changing the thread colors at the end of each step, and it ended up looking like this: 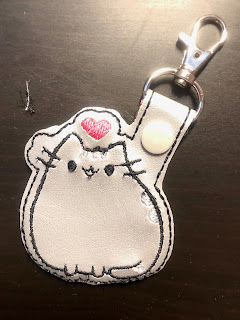 and because i didn't want to ruin any more vinyl, i used a leftover scrap of knit fabric for the back just to see how it would turn out.  and sure enough, it was still crap. 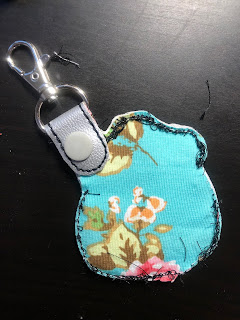 but i'm still determined to make this work.  i'm too far into it to give up now.  so i'm going to check out a few blogs, follow their directions on taking apart the machine to make sure there aren't any more loose threads caught somewhere, and then put it back together and try again.

give me strength.  send lots of happy stitching vibes.  most of all, pray for my sanity.  i've already warned my co-leader to expect me to drive by, throw the machine in her direction and run away.

Email ThisBlogThis!Share to TwitterShare to FacebookShare to Pinterest
Labels: caught the sewing bug, frustrated as hell