bye bye to the bowl (for now)

so we did actually manage to squeeze in one more trip to the hollywood bowl for this summer, and it was a somewhat last-minute addition to our schedule thanks to a super duper deal i found online.  the show was a new production of "annie," which i've seen a handful of times on stage and on the movie screen.  i scored tickets for just over $30 apiece, and after the sticker shock of the valet parking price increase that we discovered last time, i scooped up shuttle tickets that cost us $7 per person, round trip.  we got to arcadia park to board the bus in plenty of time, and we were on our merry way without having to deal with traffic or parking or any kind of hassle. 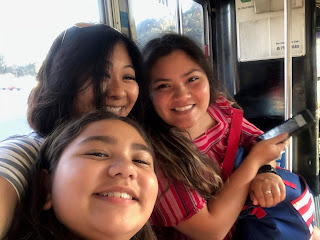 we got to the bowl about half an hour before showtime, giving us just enough time to pick up some bottled water in the little market and make our way to our seats.  for $30 we had a pretty decent view: 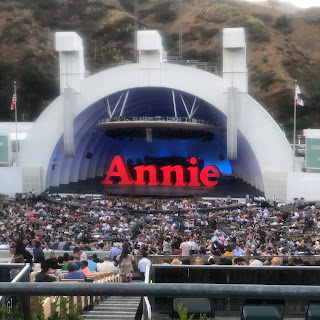 i'd gone out to gioia cheese earlier that day to pick up some burrata and used it to top a quick salad i threw together with some arugula, olive oil, sea salt and prosciutto.  each of us had one of these to enjoy: 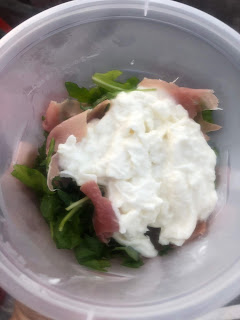 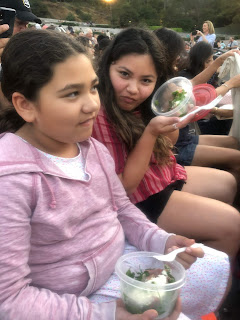 the bean isn't typically one to eat salad, but she adores burrata and prosciutto and so i managed to bribe her into downing that serving of arugula with it.  i think even she was a little surprised to find the she actually kind of...liked it.  heh.

the old lady had requested tater tot casserole for our main course, and i'd found the perfect disposable containers at dollar tree that i used to bake it in.  i'd wrapped the containers in kitchen towels and put them in an insulated bag, and we were happy to see that the casserole stayed nice and warm until we were ready to eat it. 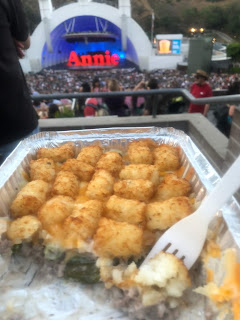 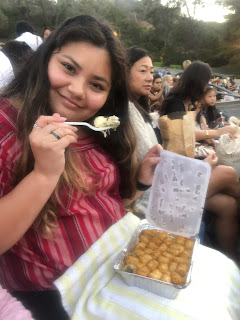 and because this was an event put on by the hollywood bowl, the rules were a little different and we were allowed to bring our own wine.  tater tot casserole and stella rosa black...klassy, yes? 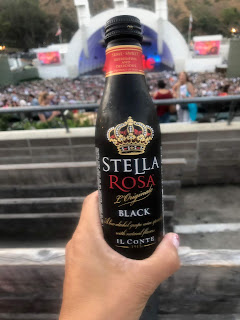 we managed to get one group selfie that evening, photobombed and all. 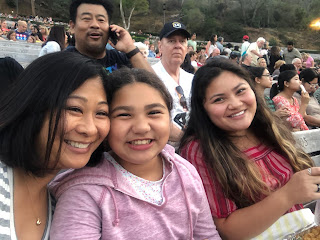 as for the show, it was okay.  there were a handful of names we recognized in the cast:  lea salonga, david alan grier, ana gasteyer, megan hilty.  and it was kind of cool that they used those big red "annie" letters in such creative ways. 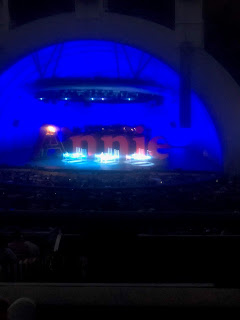 they would move across the stage, rotate to reveal set pieces, light up, split apart.  they made some minor changes to the story that i didn't love, but i'm sure they had to make some changes to shake things up a little.  the cast was pretty awesome, too.

but i think that it'll probably be awhile before we head back to the bowl.  it'll have to be something really good, and it'd be awesome if we could spring for box seats.  sitting on those bench seats gets pretty uncomfortable, and we're always crammed in next to people with not much room in between us.  not to mention, it really is kind of a pain in the ass packing up and getting there, hustling to get the shuttle and then elbowing our way through the crowds when the show is over to get back to that shuttle again.  not to mention, this time i noticed a bunch of bugs that were crawling up and down the stairs next to me, and if you know me at all i'm not okay with bugs anywhere near me.  like, at all.  ew.