it happened to be "national chicken wings day" and while we were at disneyland that day we were joking around about going to hooters to "celebrate" the occasion.  the bean always asks about that place because we pass it on our way to cheer practice twice a week, and somehow the joking ended up turning into meeting the hub there for dinner that evening.  haha! 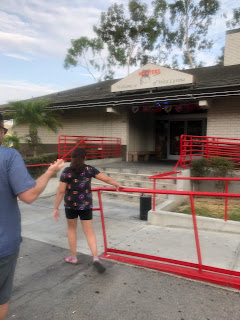 i hadn't set foot in a hooters since they had a location in old town pasadena and the lakers were in the national championship playoffs...so it's been awhile.  heh.  this particular location was in the news a few years ago for getting busted with hidden cameras in the women's room or some crap, which isn't exactly a big draw.  and i'm actually kind of surprised it stays in business, especially as it was pretty dead when we got there.  the bean kind of side eyed the orange shorts the servers were wearing, perused the menu for a few minutes and then went right into drawing pictures on the little paper napkin rings from everyone's place settings. 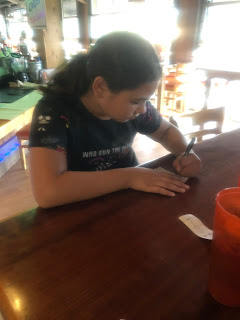 while most of our party went with the expected chicken wings in various degrees of spiciness: 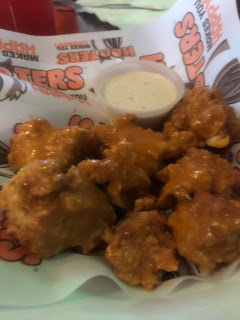 i opted for a spinach salad with grilled shrimp (which was actually really good): 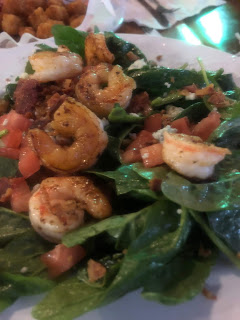 and the bean ordered up a plate of snow crab legs.  she's definitely my kid. 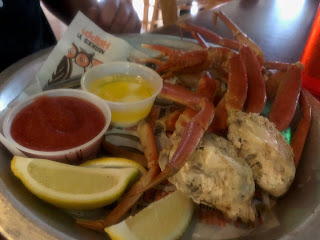 and then later on, when we got home, the old lady decided to give that flaming hot cheetos cupcake a try.  it's a vanilla cake with a white cheddar frosting, topped and filled with crushed hot cheetos. 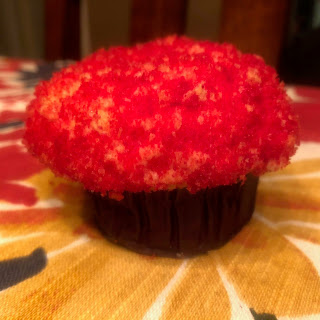 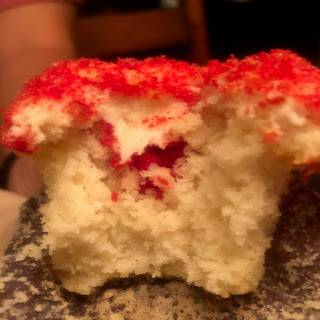 she was happy to report that while it sounded kind of weird, she really liked it.  the true test of stuff like this is whether or not she'd order it again, and she said that she enjoyed it enough that she would totally get another one.  maybe we'll get a chance to do that before it disappears from the menu.

the next morning, we dropped the bean off at california school of the arts in duarte for a long-awaited drawing and 3D art camp.  the school is new - they just completed their first school year - and i was curious to see how the bean would like the class.  i was kind of looking at it as an introduction to more serious art, and was really curious to see how she would do with it. 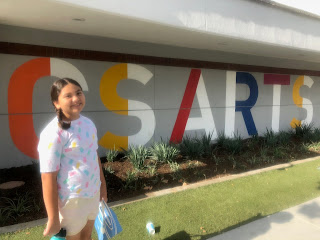 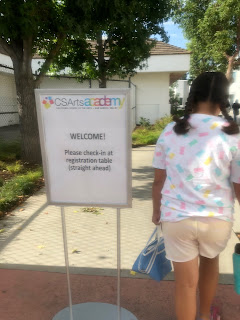 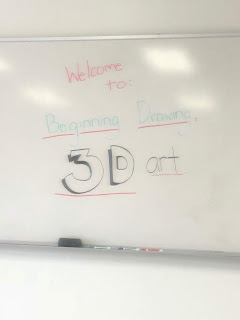 i knew she was a little nervous because she wouldn't know anyone there and it was completely unfamiliar territory for her.  it was just for the week, monday through friday, from 9 to 4 - so a pretty full day.  the old lady and i thought about her all day and we were pretty happy and relieved when we picked her up at the end of the day and she reported that she'd really liked the class.  they were working on drawing all sorts of different things, and then spending the second half of the day working with mixed media and learning drawing techniques using a computer.  that's not one of her strengths yet, so i'm glad she was going to get some experience with it.

and on the last day of camp, we were invited to come to the campus for an art showcase, where the kids would get to display the projects they'd worked on during the week. 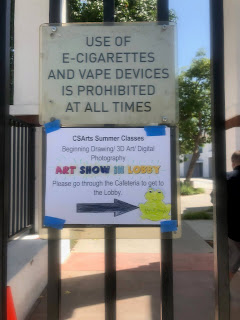 the bean found us when her class was brought in, and sheepishly handed me a little pile of clay pieces that had apparently fallen apart before she could put it up for display. 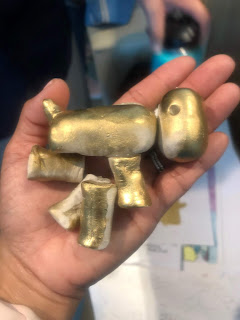 but she was happy to show off the charcoal drawing of a bowl of fruit she'd done: 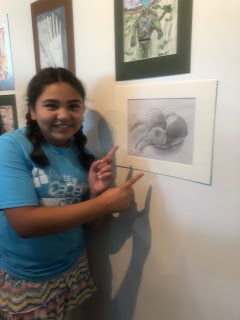 and then a mixed media sculpture she'd brought in wire hangers for. 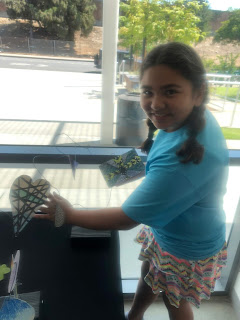 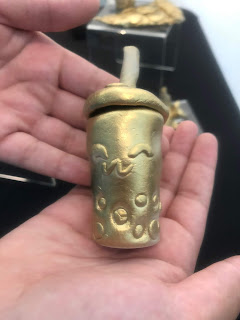 so it's a state-funded school for junior high and high school kids, and there are programs for performing arts like music and dance as well as drawing and photography.  the kids have to test in and be accepted, and then spend roughly 2/3 of their day on academics.  i'm told that the classes are on par with AP classes at other public high schools, which sounds pretty great, and then spend the rest of their day in their chosen field of art.  while we've been strongly considering the local catholic all-girls high school for her over the last couple of years, i'd be really open to this as an option for her if the dream of becoming a disney animator endures and isn't just a childhood fantasy.

i guess i need to start looking for some more advanced art classes for her to attend in the meantime.  sounds to me like that's what will help her figure out whether it really is something she wants to pursue as a career.  and with her schedule starting to build back up as we get closer to the start of the new school year, i better find it fast.  eek.
at August 08, 2018

Email ThisBlogThis!Share to TwitterShare to FacebookShare to Pinterest
Labels: future's so bright bean's gotta wear shades, hooters, the bean is an artist