still waiting to be discovered

remember when i told you that the girls and i got to attend a taping of nickelodeon's double dare reboot?  we'd been told that our episode was going to be the third one of the season, so when they started airing we kept an eye on the schedule to make sure we didn't miss it.

except that it didn't exactly happen that way.  so what i didn't tell you in the last post was that the kids who were competing on our episode were - well, let's just say they weren't exactly as enthusiastic as you'd typically see contestants on a game show being.  they all struggled to answer most of the questions and performed their physical challenges rather woodenly.  and so as time went on and we didn't see our team names showing up on the tv guide, we started to lose hope that we'd ever see it.  although i suppose they had an obligation to eventually air all of the episodes that were taped, and so we just kept waiting and hoping.

finally, about six weeks after we'd sat in that live studio audience, our episode aired.  yay!  we finally had a chance to sit down and watch it the other night, and were a little relieved when the nickelodeon folks did their magic and somehow managed to edit the footage into something that was a lot more interesting to watch than what we'd seen.

they didn't pan out to the audience a whole lot, but about nine minutes into the show, we saw them: 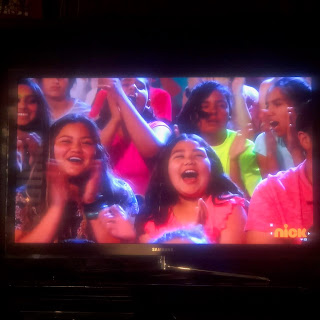 the camera actually stopped and focused on these two for a good five-plus seconds, and i cackled all over again at the memory of the producers seating the old lady with all the kids in one of the front rows.  unlike her mother and her sister, she doesn't like having any attention on her, and as we paused and rewound to watch them onscreen again i could tell she was torn between being excited to be on tv and mortified to be on tv.  heh.  and then as we got to the obstacle course finale, we spotted them again.  only this time, the bean was easy to spot while the old lady was mostly hidden behind a sign. 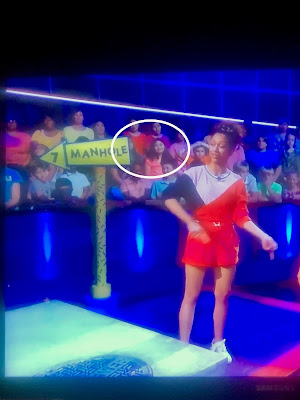 as for me, i was a little disappointed (but not surprised) as we watched and the camera never came my way.  and then as the end credits started to roll, the old lady yelled out "WAIT, LOOK!" and hit pause: 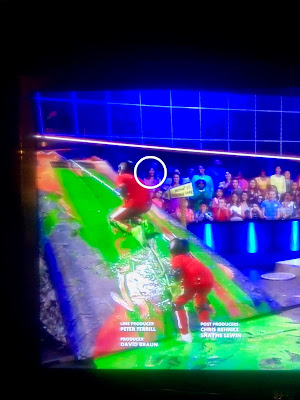 yaaaaaaay.  i made it on tv after all!  hahahahahahahaha.  and if you want to see our episode for yourself, it's episode 22:  kickin' cousins vs. seeker savages.

hit up that on demand!  the shot of the girls is totally worth watching.  don't tell the old lady i told you.
at August 03, 2018

Email ThisBlogThis!Share to TwitterShare to FacebookShare to Pinterest
Labels: as seen on tv, bean's a star