yay for being on tv!

so i was pretty excited when one of the local news stations posted a comment on the first day of school collage i'd posted on instagram.  they share those pictures during their morning news broadcasts if you include their hashtag, and you know i'm always all over that.  see:

i made sure to set the dvr to record the broadcast, so the bean could see herself on tv again (because who doesn't love that?).  they actually ended up sending a correction and changing the date, which was no big deal.  it was set to air this morning at 4:30, and so when the bean woke me up this morning i turned it on so i could show it to her.

we both cracked up when this flashed across the screen: 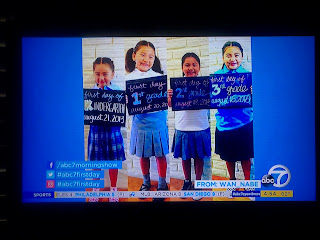 Email ThisBlogThis!Share to TwitterShare to FacebookShare to Pinterest
Labels: as seen on tv, bean's a star