do you remember when the bean was obsessed with wearing those faux glasses she picked up at claire's while we were in hawaii last year?  she wore them so regularly that most people at school didn't even realize they weren't real and assumed that they were just a new development over that summer.  and then a few months later, she kind of lost interest when other girls started wearing similar glasses.  heh.  although she did talk about wishing she had real glasses to wear, despite our warnings of how much it sucks to actually *need* them.  i wore glasses and contacts for years, starting from when i was about 15 all the way till about ten years ago.  lasik surgery, man.  one of the best things i've ever done.

but as time went by, we noticed that she was starting to squint.  and she'd mention now and then that she couldn't really see something clearly that the rest of us could see easily.  the kicker was when school started last week and she mentioned that she was having trouble seeing the board, but when a friend let her try on her glasses they helped her tremendously.  bah.  and so i made her an appointment for an eye exam at our local costco.

the first thing they did was this optional procedure where she looked into this machine while it took a photograph of the inside of her eyeballs.  they suggest doing this once a year so that the eye doctor can check to make sure that your eyes are healthy all the way around. 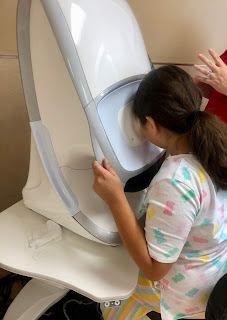 they had her sit at a couple of other machines, including the one that blows a little puff of air into each eye.  that one was her least favorite, which i had to agree with, but she was happy to hear that that was the worst of it.  and then we met the doctor and went into the exam room for the rest of the checkup.  i explained that she'd been wearing the fake glasses for awhile and also that i wouldn't have put it past my kid to fudge a little on the exam so that she'd get a prescription, and the doctor gave me a knowing look and told us that she'd been through that before and could totally tell when it was happening.  excellent.

they started with the usual - covering one eye at a time while reading letters that got smaller and smaller as they went on. 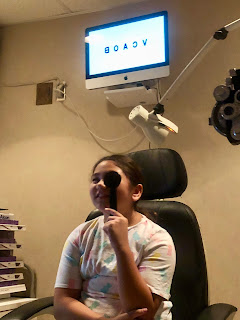 she was clearly having difficulty with some of those letters, or at least she seemed to.  and when they got to the part where she sat behind this contraption while the doctor switched from one lens to another to see if any of them were of help to her, it was obvious that she was going to need some sort of glasses for when she needs to read the board from her seat in the classroom. 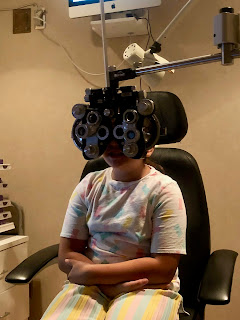 one more look at her eyeballs to make sure all was well: 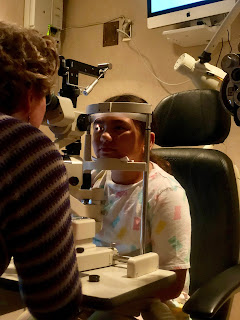 and then it was time for the fun part...trying on frames.  the old lady and her special friend joined us at this point to help us narrow down which ones looked best.  we started with these: 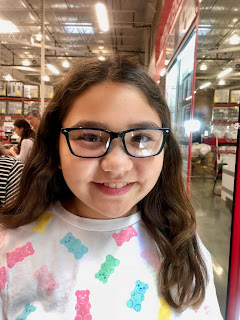 i nixed the round frames.  they just didn't do anything for her face. 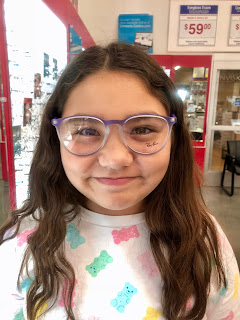 and these red frames reminded me of my cousin r, who proudly sported the "sally jessy" glasses for years. 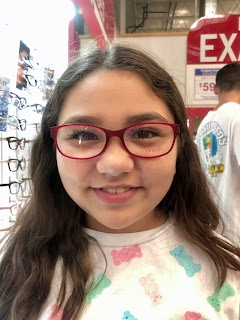 in the end, these were a winner.  they're black, but have a fun blue tint on the sides that softens the darkness of the frames. 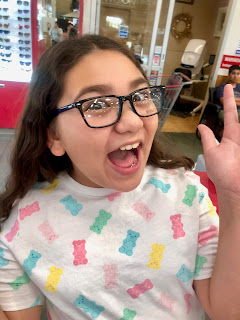 she was bummed to hear that it would take 5 to 8 business days for them to be ready, but i think the look on her face says it all.

oy vey.  let's see how excited she still is to be wearing glasses in a few years.  but at least the prescription is so low that maybe with regular wear it'll correct itself.  hopefully she doesn't end up blind as a bat like her mother was.
at August 23, 2018

Email ThisBlogThis!Share to TwitterShare to FacebookShare to Pinterest
Labels: the bean wears glasses