okay, so after a week of sitting and stewing over my failed attempts at putting my embroidery machine to work i finally decided to give it another shot.  of course, the damn thing didn't magically fix itself while it had more time to sit around.  but after i did a bunch of googling to see if i could find a way to fix it, i stumbled across a blog that gave me some insight on how to check one more area i didn't think i had access to inspecting.  i'm not particularly mechanically inclined, so i don't really do much in the way of opening things up to check them out.  i'm always afraid that i'll screw something up, break off a part, bend something the wrong way, or not be able to figure out how to put it back together.

but i sucked it up, read the directions really carefully, put on the old lady glasses and busted out a flashlight to make sure i could see what i was doing, and went in.  i took out one screw, pulled off a part of the plastic cover i didn't know could come off, and lo and behold a second and a half later found a long piece of thread that was jammed in the tension discs that i never would have been able to find otherwise.  i put everything back together, rethreaded the machine and then decided to pop out the bobbin case and make a little adjustment to the tension to see if that might help too.

and whaddaya know...the damn thing worked like a charm again.  no ugly snarls of thread birdsnesting underneath my project, no issues with the bobbin thread not catching the upper thread, no funny noises - nothing but love from my machine to me at last.  i gave that key fob another try, and this time it stitched out beautifully. 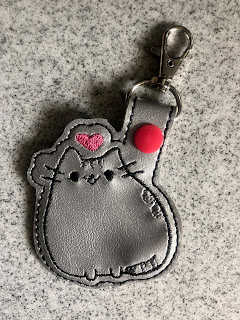 i swear, i thought i was going to cry with relief.  i was so excited to get started on some fun new stuff and wasted no time in putting my hoop together with a new project.  this time, i wanted to try a zipper pouch that's constructed completely in that hoop and sewn together by the machine.  i'd already watched a youtube video that showed me each and every step in detail and after the success with that key fob i was feeling pretty confident.  i made myself go through each step slowly and carefully, and look what i managed to do: 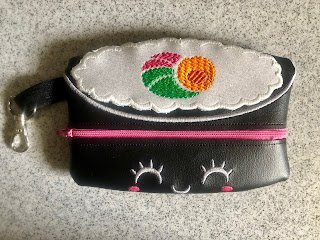 the excitement was at an all-time high, people.  i called the bean in to see my handiwork and she just about melted from delight at that cute little sushi zipper pouch that she knew i'd made for her.

it happened to be the final day of some pretty huge sales at joann's, so we hopped in the car to pick up some supplies at rock-bottom prices so i could get started on trying another design.  the sushi pouch was made of marine vinyl, and i wanted to try making the next one using felt.  now, this is far from perfect, but it made for great practice: 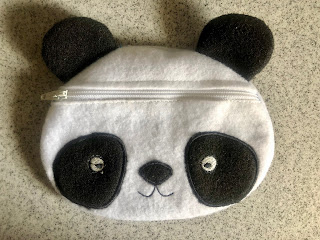 as did this one.  it's a rainbow poop emoji! 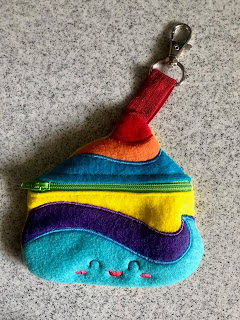 we had a birthday party to attend the next day, so i decided to make one more so that i could give the bean a few choices to pick from to put the gift card in for her friend.  i threw in the matching key fob (because a 10-year-old has keys, right?) and here's how it turned out...a pb&j with milk: 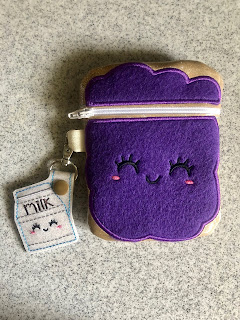 there was much squealing and oohing and aahing when i presented her with her options, and after a lot of debate she finally settled on that pb&j pouch to present at the birthday party.  it worked out really well, because the gift card fit perfectly inside.

i'm kind of addicted to making these little things now.  it's so much fun, and with that time of year coming up you can probably guess what i'm thinking...

I FOUND MY CHRISTMAS HUSTLE!