no more "petit" food with our not-so-littles

it'd been awhile since we had a playdate with our friends lilcee and dailygluttony, so we were excited when the day finally came for us to get together and go check out the "that's from disneyland" exhibit together.  doesn't matter that the bean and i already saw it with the old lady and her special friend - there were plenty of things i hadn't gotten to look at more closely and i was happy to have a second chance to see it before everything was auctioned off.

of course, our first stop was somewhere to grab some grub.  none of us really knew the area, but DG had found us a great spot that sounded delicious and kid-friendly to boot: 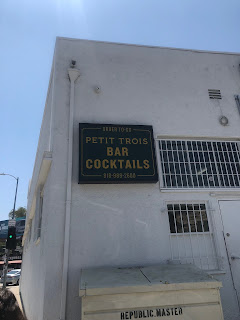 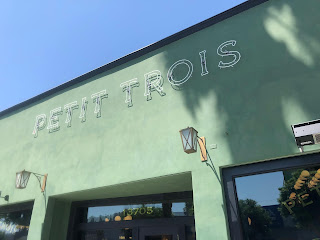 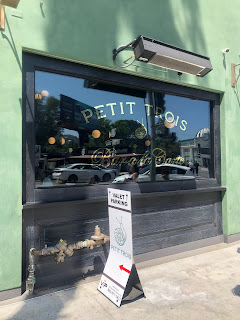 it was quite the hotspot, with most tables taken and the bar almost fully occupied. 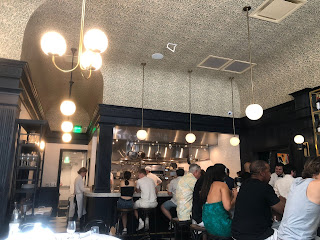 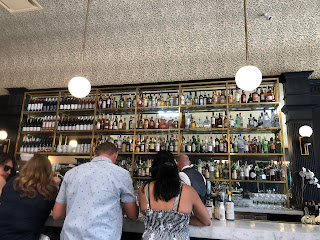 we wasted no time in perusing the menu and picking things to order and share, with a little guidance from our server.  the first item to arrive was an order of canelés, which came three to a plate...perfect for the adults to share. 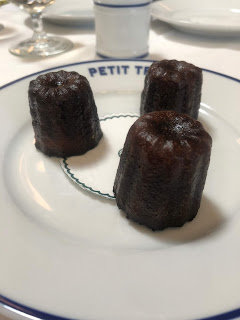 okay, yeah, so i had no idea what a canelé was, but the ladies explained that it was a custard-y, caramel-y, delicious rich french pastry with a caramelized crust.  we knew the kids wouldn't appreciate them as much as we would, and so when they questioned it we just explained it away as "something for grown-ups."  heh.

but not to worry - we also ordered a nutella tartine that grabbed their attention right away. 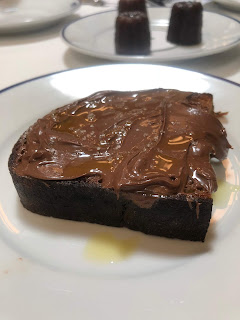 this was the omelette petit trois, a delicate french-style omelet filled with the creamiest, decadent cheese.  we loved it, as did the bean. 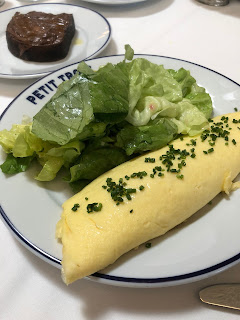 the other kids didn't care for it, but instead were super excited to see the plate of pasta from the kids' menu arrive.  it was the simplest dish - fresh pasta with butter and cheese - but i managed to snag a bite from the bean and it really was super tasty.  they gobbled it up faster than i could get a picture of it, so here's a shot of them instead. 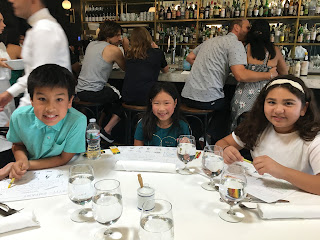 the parisian ham and gruyere filled waffle doesn't look like much, but it was really good. 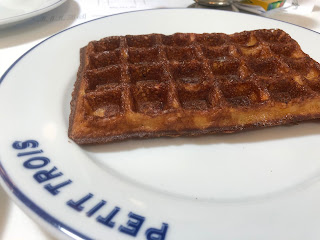 we also ordered the "mec muffin," because the server recommended it and it was kind of funny.  i mean, this is definitely not your 2-for-$4 paper-wrapped sandwich from mickey d's. 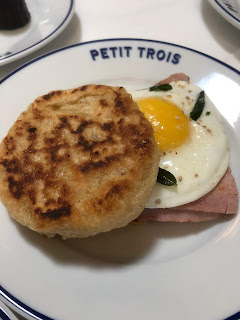 our last savory dish was the confit-fried chicken leg, which caught the bean's attention because fried chicken is her favorite.  so good. 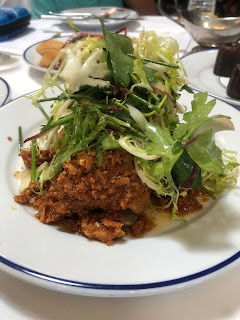 and we couldn't leave without sharing an order of freshly baked madeleines - especially since they came six to a plate, so we could each have one. 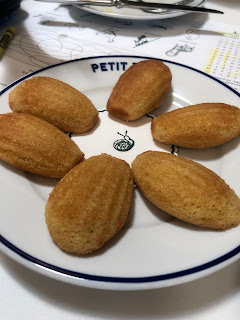 this little outing taught us something, though - taking our little group of pre-tweens to a fancy-ish spot like this where the quality is top-notch but the portions are small just isn't practical anymore.  they're at that age where they're just hungry and really don't give a crap about how delicately things are cooked or how much preparation it takes to turn out delicious dishes.  we ended up supplementing the meal with two additional orders of kids' pasta just to fill them up, and even then i'm not convinced that they were completely satisfied by the time we left.  heh.  we'll have to save the fun places like this for grown-up outings only.

bring on the cheesecake factory and california pizza kitchen!  hahahahahaha.
at August 27, 2018

Email ThisBlogThis!Share to TwitterShare to FacebookShare to Pinterest
Labels: food is better with friends