so when i first started getting into the decorated cookie thing (which i'm completely obsessed with, as you know), i came across a site that totally caught my attention.  it's called "frosting for the cause," and the goal is to showcase a different blogger's homemade baked goodies for every day in 2011.

but in addition to that, the bloggers all commit to donating a batch of their cookies or cupcakes to a local cancer hospice (preferably one for women, but it's not a dealbreaker) and at least $25 to the american or canadian cancer society, earmarked to help find a cure for cancers that affect women.  with those donations from the 365 bloggers, over $9,000 will be raised for the cause.  each blogger gets to do a guest post on the FFTC site on their designated date to help spread the word, and maybe a reader or two might be inspired to make a donation of their own, or sign up for a guest posting date of their own.  i think the majority of us have been touched in some way by the ugliness that is cancer, and i loved the idea of perhaps being able to help in some small way.

it took about 2.75 nanoseconds for me to make the decision to sign up, and i was excited when i received a response within minutes with my date - today, may 4th. 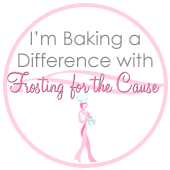 the cookies i've baked for this post are in honor of my beautiful friend oyana (AKA wonderw1fe, AKA cinny, and probably a bunch of other names i can't remember at this point), who i never got to meet in person but shared a very special time in our lives via a fantastically snarky, super fun message board on the knot.  she was funny, gorgeous, witty as hell, and just awesome all the way around - and sadly, taken away far too soon by that bitch named cancer.  stomach cancer, to be exact.  if you didn't get a chance to read our story, i wrote all about her back in november.  i think of her often, and doing these cookies found me in tears more than once.

one of the country's best institutions for cancer treatment is only minutes away from me - the city of hope.  and although their hospice, the hope and parson village, isn't a women-only facility, i thought it would be nice to make my cookie dropoff here.  when i called to inquire about how to make my donation, the staff members i spoke with sounded a little startled as i explained what i was doing.  heh.  i guess it did sound a little out there - "hi, i'm a volunteer with this website, and i want to bring you some cookies!"  but as we chatted the idea seemed to grow on them, and i could hear the smile in the office manager's voice as he gave me directions on how to get there.  he told me that there weren't any in-house patients at that moment (which i'm going to take as a good thing), but i figure that could change by the time i get there.  and if not, maybe my cookies will brighten the day of the caregivers who work so hard to take care of these patients who are facing their last days on earth.

although it's likely been done before (and probably by much better cookiers than me), i chose to do my cookies with cutters shaped like the awareness ribbon - in purple, for stomach cancer.  and i decided to cut out some puzzle pieces too, because i'm a dork like that.  you know, the missing piece - a cure for cancer?  yeah, i know, i'm a cornball.  i think it's acceptable in situations like this. 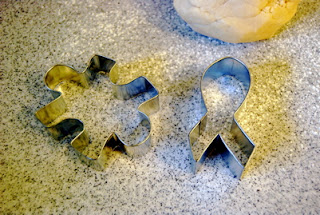 my favorite sugar cookie recipe is pretty much engraved on my brain by now.  but i still pull it up on the ol' iPad every time i bake - because i still don't trust my memory.  i'm getting old, you know, and i could easily screw up a measurement that would throw off the whole batch.  that would suck.  anyway, i mixed it up pretty quickly. 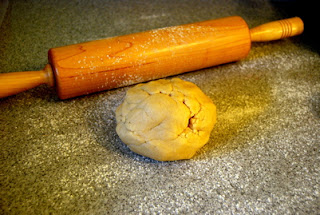 rolling and cutting was a little challenging due to the icky warm weather.  the dough got too soft and was a little difficult to pick up after i cut the shapes out, but i managed. 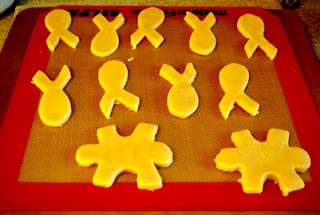 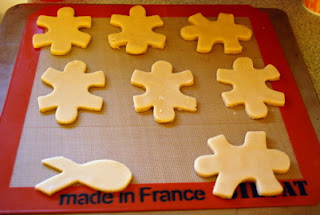 because i started so late, i didn't have time to make the frosting or get them decorated, so i put the baked and cooled cookies into a big ol' ziploc and left them overnight.  at least this way, i could get right into it the next day while the bean was at preschool and hopefully get them all done. 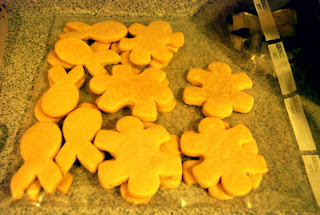 the first thing i did was make a batch of royal icing.  i wanted to use two shades of purple - one to cover the entire surface of the cookie ("flooding") and another to do a contrasting outline.  so i divided the frosting, tinted it, and then thinned out the majority of it for the flooding process.  this is probably my least favorite task for cookie making, but it's necessary, so there you go. 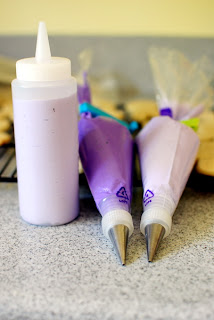 i found that when i did the outline and then immediately flooded, the line isn't as apparent.  once the flood icing touches it, it blends nicely and looks so much better than previous batches of cookies.  the shape of the awareness ribbon was easy to do, and i whizzed right through all of them in no time. 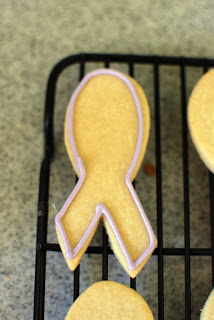 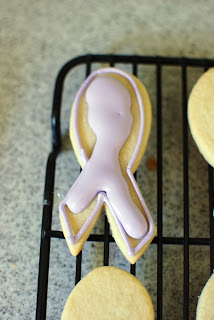 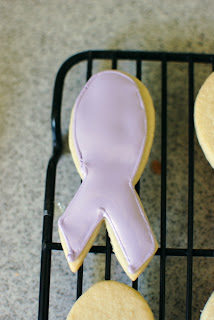 the puzzle pieces were a little more work, though. 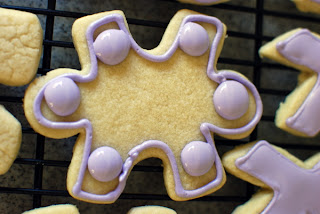 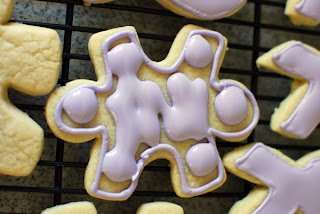 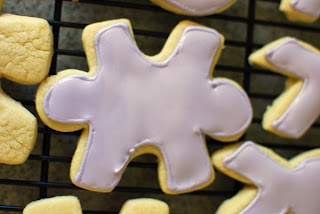 thinking that a whole platter of cookies in the same color scheme might look a little boring, i thought i'd try something different with some of them. 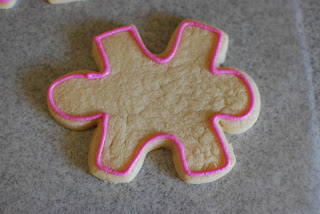 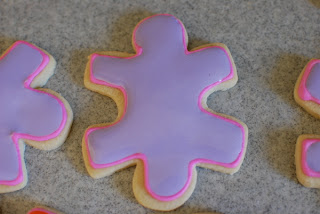 by the time i was done screwing around with the rest of the cookies, the icing had dried enough on the ribbons for me to go back and do the contrasting outline.  because i was doing these in oyana's honor, i thought it would be nice to personalize them a little and added her initials. 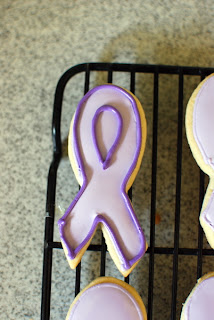 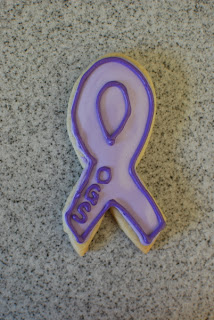 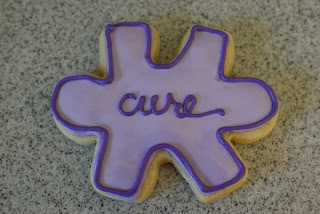 cookies that have been flooded always take hours to dry completely - usually overnight.  so i didn't get to arrange them on my platter until the next day.  i'm always worried the cookies with get crusty or stale, sitting out for hours like that, but i guess all that icing acts as a protective "seal."  i printed out a little note with a quick explanation of what the cookies were for, and then we hopped in the car to do the delivery. 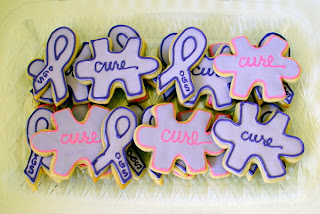 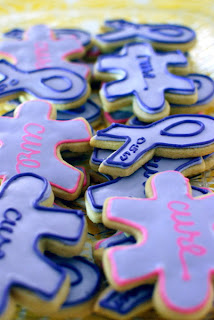 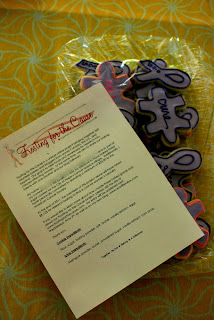 city of hope is located in nearby duarte - where i lived with my family through the latter part of elementary school, most of middle school, and then half of high school.  it was easy to find, and the guard at the security booth gave us directions to the hospice, located in hope and parsons village. 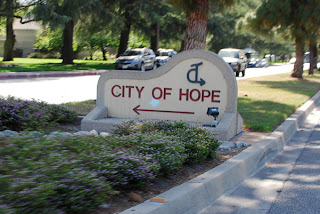 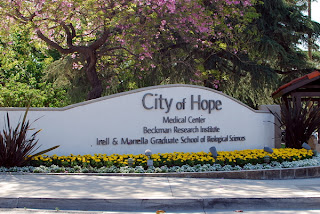 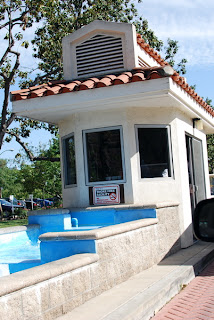 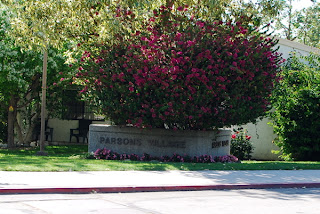 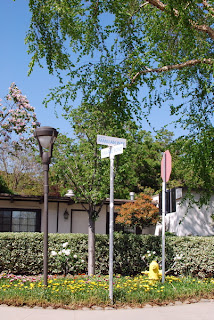 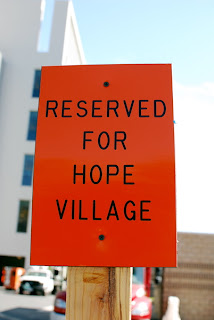 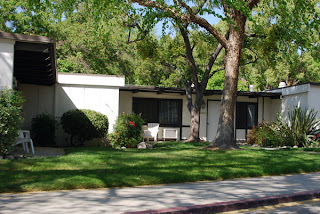 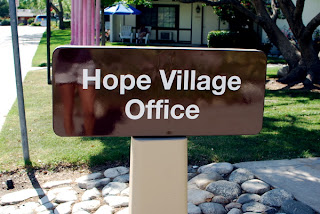 the dropoff was short and sweet.  i explained to the receptionist that i'd spoken with the office manager, let her know that they were meant for patients, caregivers - pretty much anyone who wanted them, and left her with the note that gave more information about what the cookies were for.
i just made my donation to the american cancer society, which completes my commitment to the FFTC project.  it doesn't seem like much, but i know that every bit helps, and i enjoyed working on my contribution.
if you're interested in participating, there are still plenty of spots for the latter part of 2011.  do it!  do it now!
at May 04, 2011