have you noticed the "spring top judge 2011" badge i added to my sidebar?  no?

that's okay.  i never said a word about it, nor have i mentioned it at all until now anyway.  do you remember last year about this time, when i first got into sewing and entered made by rae's spring top contest?  i actually went pretty far in it and found myself, uh, neck and neck with another entry for the top prize.  it even looked like i'd won, except that there was a mixup in the timeframe for the end of the contest and i lost out to the other top (which was actually quite lovely, and since i was a total novice, i was excited to have gotten that far anyway).

anyway, a few weeks ago, rae contacted me and a few other folks to see if we were interested in judging this year's crop of spring tops.  and although this meant that i wouldn't be able to enter, i thought it would be great fun to be on the other end of the contest.  i also like rae a lot - she's super creative, has awesome (free!) tutorials on her blog, takes great photos, and just seems like a really nice gal all the way around.  i've already gotten a couple of batches of tops to judge, yay!

with the teen's big 16th birthday celebration coming up this weekend (more on that later), i thought it would be nice to make myself a little suh-in' suh-in' to wear with jeans and a cute pair of shoes.  i'd looked in my closet and found maaaaaybe two tops that were nice enough to wear, but as i perused my blog entries from past shindigs, i was pretty bummed to see that i'd already worn those tops for occasions such as this.

well, shit.  that sucks, man.  my wardrobe is pathetic.  for serious.


but i also didn't have a ton of time.  i went through a bunch of the projects i've bookmarked from other sewing blogs and settled on something that was super easy.  it's actually a modified version of a toddler's "pillowcase dress," but i'd seen patterns at the store for similar tops and thought it would be nice with the right kind of material.  most of the toddler dresses are made with basic cotton and are meant to be worn for playtime or whatever, so to dress mine up a little i perused the "silky" fabrics section of the store and managed to find something i was satisfied with.  i like the colors a lot, although i'm pretty "meh" on the pattern.  oh, well.  i was a beggar and i sure didn't have the time to be a chooser. 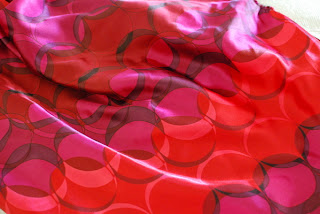 the top itself is actually really simple.  it's basically two rectangles with armholes cut out, a casing at the top, and a ribbon or fabric tie run through and tied at the shoulder.  it seriously took me less than an hour to sew this thing up - i had more trouble getting that stupid fabric tie sewn and flipped around than anything else.  and i was done from cutting the fabric to threading the tie in the span of the bean's afternoon nap.  heh. 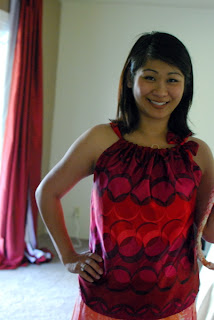 yes, i am wearing a skirt that absolutely doesn't match.  i was just excited to try the damn thing on and turn to my friends on twitter to see what they thought.  instant feedback is easy to get that way, and we all know i just totally wanted to be an attention whore and bask in the glow of any compliments i might get.  luckily, the feedback was pretty positive (although many didn't care for the pattern either, heh), and the hub and the teen both gave it their stamp of approval too. 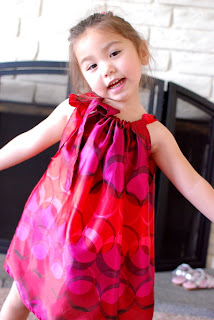 heh.  she must've liked the feel of the material too, because she didn't want to take the damn thing off.

i also managed to throw together a simple skirt, with the help of this tutorial from rae's sister dana (and yup, i totally look like i'm choking myself with my own camera strap. with a big ass smile of triumph): 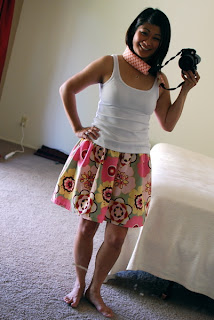 i modified it a little, too, adding hidden pockets in the seams.  i LOVE pockets, and adding them to anything with a side seam was so much easier than i thought.  so glad to have stumbled upon a tutorial for that too.  i predict several more skirts for me coming soon.  very soon, with this nasty ol' butt ass hot weather we're sweating out already.