renewing my membership to team fatass

because i was adamant that we not go out for mother's day dinner - always the biggest clusterfuck on the face of this earth, with awful service, inflated prices, too many people - i volunteered to cook.  we had the grandparents over, and i did a nice batch of chicken cordon bleu with sides left over from the previous night's BBQ.

but that's not the good part.  oh, no.  for dessert, i decided to try a recipe i'd seen on twitter for something that sounded super duper delicious and fantastic:  twix brownie bars.

the mere mention of it makes you drool, yes?  well, it sure had that effect on me.  and i was excited to give it a shot.  i didn't take a whole lot of pictures, but it was fairly simple to throw together.  the shortbread part was made incredibly easy by tossing the flour, sugar, and butter into the food processor and letting it do all the work.  and then i used a tried-and-true recipe for brownies from the hershey website for the next layer.

for the caramel layer, though, i totally cheated.  i'd had a tub of this stuff in the fridge for quite a while, and until now couldn't think of something to use it on: 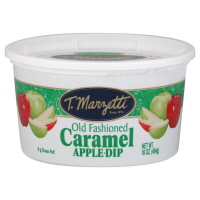 worked like a charm.  muahahahahahaha.
not having a ton of time to allow the finished pan to sit in the fridge and chill, i jumped the gun and dipped some of it into melted chocolate so i could serve some after dinner was over.   so the caramel was still sticky and gooey, and i ended up totally wasting half of my chocolate because it seized and got all weird.  it was okay, though - the bars tasted fantastic and i just stuck the rest of the pan back in the fridge to set overnight.
the next day, i pulled it out and started over with new chocolate. 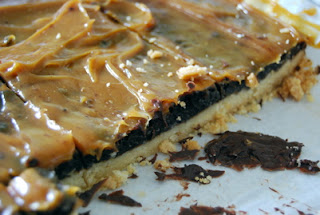 and it was going well, except that halfway through my dipping spoon totally took a shit on me. 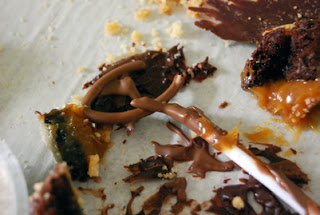 some of the caramel seeped through somehow, and it kinda looked like worms.  or poop. 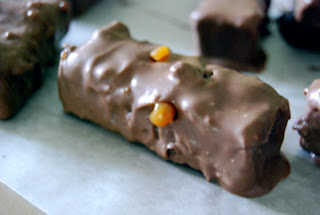 i got tired of dipping after a while, and decided this was more than enough for us to enjoy. 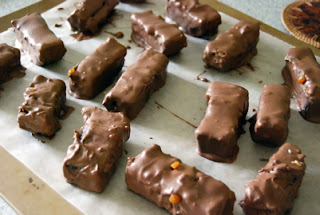 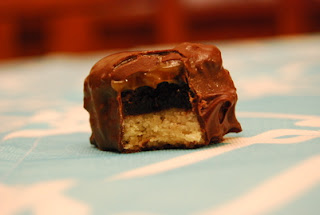