i'd waited to tell her about it - mostly to avoid the "when are they coming, mommy?" times a zillion.  heh.  and on friday after school, it was finally time to give her the happy news.  and she was STOKED.  she gave me the big eyes, kinda like this: 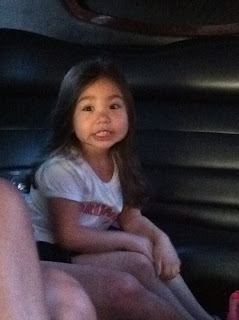 she was so excited.  it was really sweet.

luckily, they had a nice, early flight.  they landed at about 10am and after getting the bean all hyped up and in a total lather over what was coming next, the hub went to pick them up.  she really wanted to go with him, but stayed home to get dressed and ready.  and when she saw his car pull up in the driveway, she started hootin' and hollerin' up a storm.

she stood at the window, and when the door opened and MIL stepped out, it was the happiest, loudest shriek ever:  "GRAAAAAAAMMMMMMMAAAAAAAA!!!"  high-larious.

we opened the door and MIL barely got a foot inside before the bean launched her little body at her legs.  mollydog was wagging her tail so hard i thought it'd fall right off and started jumping up and down trying to get MIL's attention.  it was chaotic and loud and happy and wonderful.  i picked molly up to make sure she didn't slip out the door and she wiggled and writhed around in my arms wildly, thinking she wouldn't get any attention from our visitor.  i wish i'd had a videocamera for the whole thing.  after MIL finally got all the way inside, the bean at first gave her a giant hug and then stepped back and kind of swatted her leg as if to say "where the HELL have you been??"

it was a big ol' lovefest all the way to naptime.  she cuddled with her grandma in their bed, and i left them alone to bond and enjoy their time together.  but after a good half hour of reading books and chattering - way past naptime - i finally walked in and told her she needed to go to sleep.  and from the way she was clinging to MIL, i knew what was up.

"babe, go to sleep.  grandma's still gonna be here when you wake up...today," i told her.  and she wrapped her arms around her neck, closed her eyes, and went right to lalaland.

she hasn't left her side unless she absolutely has to.  this morning, instead of being my little alarm clock, i heard those little feet running down the hall and right into the ILs' room.  and with the time difference, i knew it'd be okay as they'd probably be up anyway.  i felt a little sad until she trotted to my side of the bed and chirped her usual "mommy! wake up!"  like always, i pulled back the covers so she could come in and snuggle, and she did.  but only after she said "i can only stay for a little while, because i'm gonna go see what grandma's doing."

the funniest part was when i heard them tiptoeing back through the hall to the bathroom.  MIL went in and shut the door, and the bean sat in the hallway humming loudly to herself as she waited.  after a few minutes, she knocked:  "grandma, are you done yet??"  maybe it's not as funny now, but man, listening to the humming and the feet on the floor as she danced around and waited was comical.

while i'm enjoying having them back, i'm also really, really dreading their departure in nine days.  because when they left the first time, the bean really didn't have any idea what was going on.  but now - now, she understands that when grandma goes to texas, she doesn't get to see her.

Email ThisBlogThis!Share to TwitterShare to FacebookShare to Pinterest
Labels: fun visits with folks i love