gonna drive me to drink

the teen is oh-so-close to getting her driver's license!

last week, she finally got started on her official behind-the-wheel training with a licensed instructor.  oh, and i learned that all the practicing she's been doing over the last almost 6 months was totally illegal.  apparently, the permit isn't actually valid until the first session is over and the instructor has signed the darn thing.  oops.  luckily, she's a good driver and never did anything to attract the attention of local law enforcement.

despite what my friends said about preferring a crappy but unmarked car, the teen was pretty stoked to drive this rather gaudy but still way cool mini cooper. 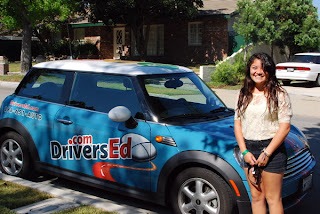 i warned the instructor that i'd be taking a few pictures, and she laughed.  "most parents take a ton of pictures, and some of them bust out a video camera, too," she shared.  well, i wasn't gonna go that far, and really only took a few.  how many pictures of a car does one really need, anyway? 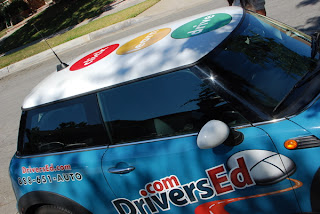 and then they were off. 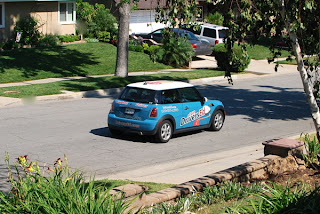 she's already blazed through two of her three sessions, and her instructor thinks that she'll pass the test with flying colors.  we're both a little concerned about the parallel parking bit, although we learned that a decent attempt that's too far from the curb is only a 1-point markdown - but hitting the curb is an automatic fail.

Email ThisBlogThis!Share to TwitterShare to FacebookShare to Pinterest
Labels: the teen can drive