such a tiny gesture of support

is it really bizarre to mourn for someone you never met?

i suppose maybe to some, it would be.  although when you hear sad stories that could pretty much happen to anyone, it's hard not to take that situation and turn it around in your head and imagine yourself going through something similar.  well, for me, anyway.

so when i read a tweet from justjenn about baking a pie in honor of a food blogger, i clicked on the link she posted.  it took about half a second after reading that story to pull out the simple ingredients in order to bake the pie the next morning.

although i'd not seen nor heard of her before, jennifer perillo is pretty well-known in the foodie world.  and last weekend, the unthinkable happened:  her husband passed away quite unexpectedly from a heart attack.  in the heartbreaking post she published just days after, she included the recipe for a peanut butter pie that he'd loved.  for those who had been asking her how they could help, she asked them to make the pie on friday and share it with loved ones.

since friday was my mom's birthday and we were taking her out to dinner to celebrate, it was the perfect time to make something delicious.  although i sure didn't want to put a downer on the evening, so i kept the backstory of the pie to myself.  but i gotta say - as i whipped the ingredients together, i was emotional as i reflected on my own life and how easily the happiness that we take for granted could be snatched away in an instant, just like that.  yikes.

the recipe called for a simple crust made with crushed chocolate cookies and butter.  for me, that meant oreos. 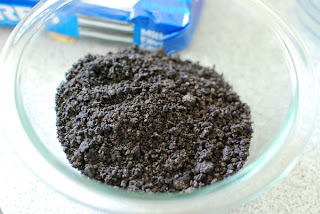 the recipe makes enough to serve 10+ people.  since there were only going to be six of us for dinner, i halved the recipe and made mini, individually-sized pies.  not wanting to cart dishes around, i was happy to have an excuse to finally use these little tins, which had been languishing in my cupboard for ages. 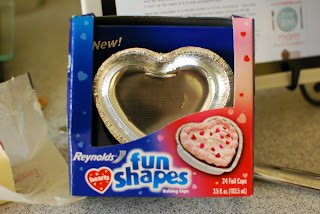 on top of the crust went melted chocolate and chopped peanuts.  next time i make this, though, i'll make the layer of chocolate a bit thinner.  unthinkable, i know - but it made the pies a little challenging to eat.  you'll see what i mean in a minute. 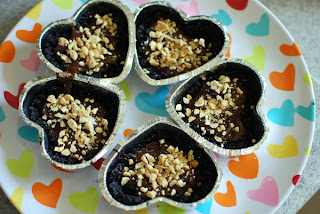 i topped the peanut butter cream mixture with a drizzle of chocolate and more peanuts, mostly because they looked too plain without it. 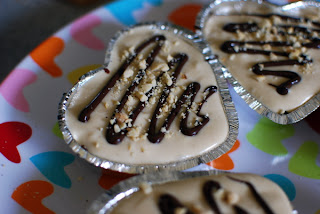 even after i'd filled those tins as much as i possibly could, i still had a whole lotta leftover filling.  so i did what any of you would do - made more crust and prepped a bigger pan.  after all, i couldn't let all that gooey goodness go to waste. 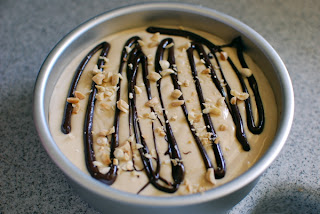 when it was time to go, i filled a cooler with ice and then individually wrapped them with wax paper AND foil.  and because i'm just crazy like that, i ziploc-ed the mini pies for the drive down to manhattan beach. 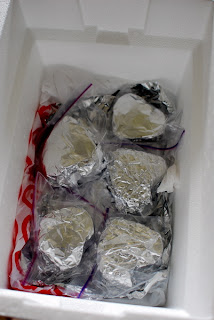 and yay - they survived the trip! 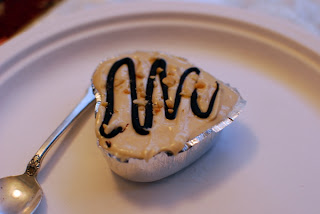 except that when we tried to scoop bites of pie out, the thick layer of chocolate had hardened so much that the crust was impenetrable.  seriously, it was hard as a rock!  i was slightly mortified until i popped that sucker out of the tin whole and found that it was easier to use my hands and just take bites out of it, kind of like a cookie.  i was too afraid that trying to cut it with the spoon would only result in flinging chunks of goo-covered crust across the room.  no bueno. 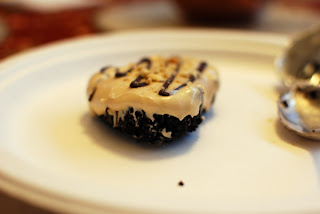 i think the cream needed more time to set in a cold fridge, though.  it was super creamy, which made for a pretty messy dessert plate (and fingers!).  but i can see why jennifer's mikey loved it so - it's magically delicious. 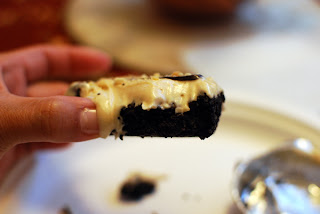 it was a happy birthday indeed.  i love my mom, and it was nice to share this love-filled treat with her and my stepdad, plus the hub and my girls. 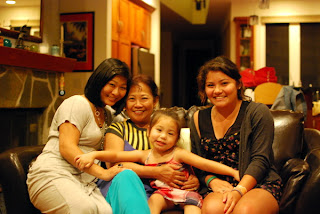 i'm sending jennifer and her own girls a lot of love and strength as they go through this awful, tough, sad time of mourning.  i'm proud to have joined the blogging community in their show of support for one of their own, and i hope that this small gesture, made by so many, will be of some comfort to her.

and now i'm going to schedule a full physical for the hub.  and me, too.  it sure can't hurt.  gotta make sure we stay healthy for our family - and each other.
at August 15, 2011

Email ThisBlogThis!Share to TwitterShare to FacebookShare to Pinterest
Labels: cherish every moment