i've had a cute little kit for making softie toys on my bookshelf for over a year now.  i'd opened it and browsed through the projects listed and then put it away for another time.  and then as i was making that baby gift a couple of weeks ago, i decided it was time to revisit and see if i could use leftover scraps of material from the dress and blanket for something fun.

of course, i found something that looked really cute and easy enough to sew together.  i got all of the pieces cut out but then ran out of time before we left for texas.  and so the very first thing i did when we got home (after unpacking and doing laundry and picking up mollydog and stuff like that) was to sit down at the machine and get 'er done.

it was a little trickier to complete than i'd anticipated, but an hour later i had this cute lucky elephant: 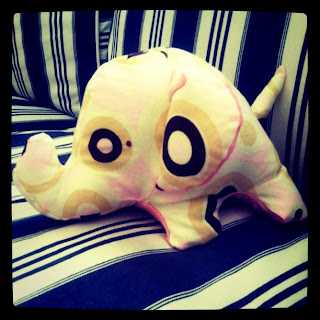 instead of using buttons, i tried my hand at some simple embroidery and managed to create two pretty darn good-looking eyes.  i was so proud of myself.  i can't wait till our next visit so we can present it to the baby mama.

the bean and i had also scheduled a playdate with my friend mommybelle, LFM and LP.  it'd been a really long time since we'd gotten together - so long that they've added another baby boy to their brood.  this would be the first time we were going to see LFM2, and i wanted to bring him a present.  so i picked out some fun boy-ish fabric from my stash and busted out another elephant.  the bean thought it was fun to introduce the two animals. 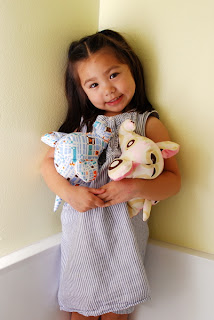 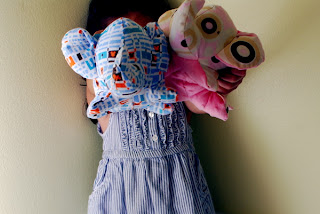 i wanted to add something more to the gift, but he's the first baby boy i've made anything for.  so after scouring the internet for other ideas, i settled on this crinkly "taggie" square.  i liked the idea of making something different, and it was super easy to throw together.  the hardest part was finding something for the crinkly layer between the two fabrics, but i managed to improvise.  the plastic wrapper for baby wipes refills worked perfectly, was the right size after i cut it open, and it made a really fun noise.  i used some leftover blanket fabric for the back, and was done in no time. 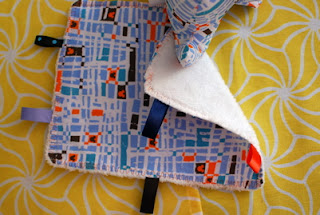 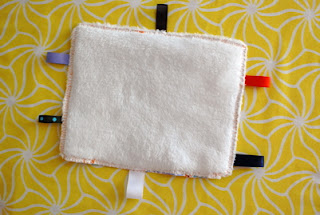 and look at how cute the elephant came out!  i decided not to use two different fabrics this time, and he came out just fine. 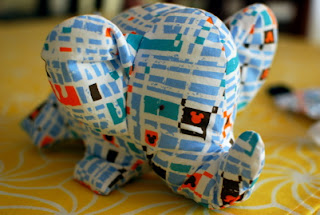 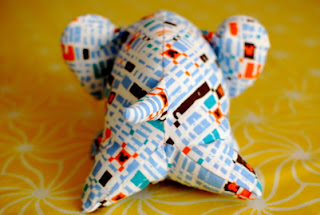 and because i apparently can't get enough, i whipped up yet another elephant and crinkly taggie for one of the hub's assistants at work, who's expecting a girl.  i used some pretty amy butler fabric that i'd forgotten i had, and threw in one of made by rae's itty bitty baby dresses too. 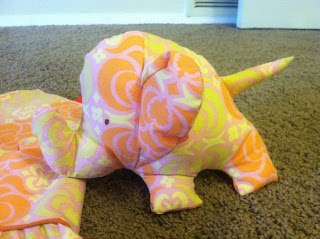 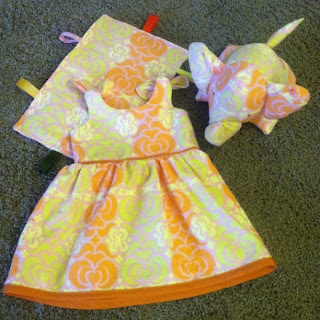 i've made these things so many times by now, i can sew them together without having to look at the instructions.  yippee!
at August 04, 2011