so i've been pretty happy about the progress i've made at whittling down my list of goals for 2011.  i just looked at it again and was stoked to see that i could cross off a good number of them.  although i snorted rather loudly at a couple of others too.  heh.

anyway, i'm definitely not gonna be able to achieve the one about running a half marathon.  fo' sho'.  and then a few weeks ago, i found out about a brand-new marathon/half/5K/10K via twitter, highlighting five cities in my area (including my hometown) in october.

this obviously doesn't give me a buttload of time to train for running 13-something miles.  but i thought that partially crossing off an item from my list would be better than nothing at all.  right?  and so with my friend kelley, who hates running but has been my biggest cheerleader for getting my ass up and into shape, i signed up to run the 5K.  quite a difference, since that's just a fraction of what the half marathon would've been.  oh, well.

last week, i saw kelley post on facebook that she'd started training via the C25K app she bought on her phone.  i remember trying this program before, but just "for fun" (like working out is any sort of fun in my eyes.  NOT) - i didn't really have any motivation to continue and dropped it pretty quickly.  it was only $2.99 and had pretty good reviews, so i downloaded it and got started. 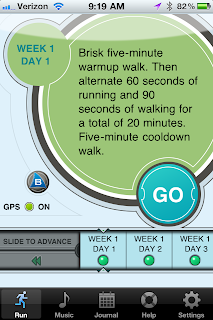 not too bad, right?  totally manageable.  so much so that i found myself doing it a fourth day that week, not realizing that it was a 3x-week program.  i was getting up around 6:30, doing the half-hour run/walk and feeling pretty darn good about myself.  look at how fun the journal is to fill out: 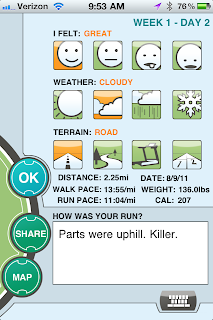 i also get to share my results on facebook and twitter, which has been great for keeping me on track.  my pace has been improving too, and this is what i got to do this week: 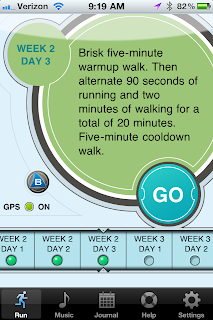 and then i got an e-mail from the organizers of the marathon that informed me that due to a conflict with the long beach marathon, the registration for the five cities thingy was super duper low.  and so that 5K that kelley and i signed up for (well, the entire event) has been cancelled.  son of a mothereffing...

but no worries.  we're still on the lookout for another 5K to sign up for.  as friends have told us, there's a race to run every damn weekend somewhere in southern california.  i just hope we can find one that isn't too far away.  so i continue to train.

we spent a few days camping this week (more on that later), so i'd done two days of it earlier in the week and then did the last session today - after a 3-day break.  i felt like this afterwards: 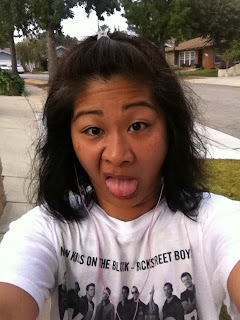 please excuse the oh-so-gorgeous "i took showers at a campsite and had no blow dryer" look.

i'm slightly terrified of next week's training, though: 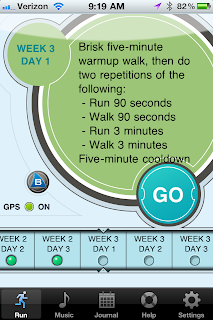 Email ThisBlogThis!Share to TwitterShare to FacebookShare to Pinterest
Labels: running my ass off, working out