the recipe is pretty simple, but if you aren't expecting it, you'd totally do a double-take at the 1/2 cup each of spinach and carrot puree.  although it looks kinda cool in the bowl, all colorful and stuff. 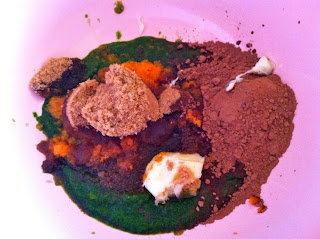 and once you add in the melted dark chocolate, it's just like any other brownie batter - all brown and gooey and chocolatey.  it smells fabulous, too. 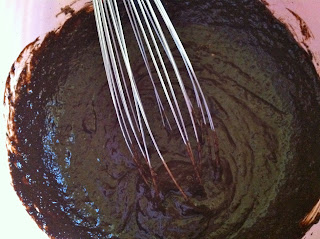 the reviews i'd read of the recipe said that you had to let them cool off completely before the spinach was completely undetectable.  so to help things along a bit, i decided to toss in a handful of mini m&ms.  does that defeat the purpose of the veggies?  maybe.  but come on - m&ms make friends!

they baked up nicely, but i think next time i'll pull them out about five minutes early.  brownies should be slightly chewy - or, at least that's how i like them - and these were very cakey and almost dry.  but the bean liked them.  so did the teen, the hub, AND brother wan. 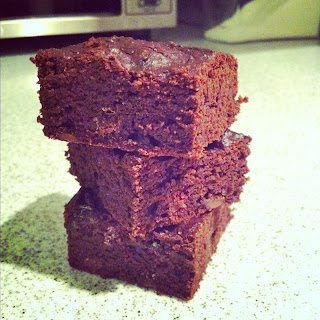 next up:  chocolate chip cookies.  with pureed garbanzo beans.  since we've already done the rocky road cookies, these should be a snap.  right?
at June 07, 2012