a couple of days ago, the teen and i headed over to her school for - get this - her senior portrait session.

now, since i didn't have a senior year of high school, i'm totally living vicariously through her.  therefore, i'm always willing to tag along to whatever she deigns me worthy of joining in on.  i was actually surprised she wanted me here, until rock-ell told me that her mom went with her for her session, too.  and when we walked into the room that the photographers were set up in, i saw that most kids had a parent with them as well.  it occurred to me that i wasn't really as special as i like to think i am, but brushed that terrible thought aside and went back to being awesome.

the guidelines for attire were pretty strict - no sleeveless, tank tops, spaghetti straps, tube tops, loud prints or colors.  and yet they welcomed props - musical instruments, varsity jackets, pets.  i tried my hardest to get the teen to take a picture with the mollydog - both in cap & gown - but she refused.  can you believe that shit?  the boys' rules were just as rigid, requiring a dress shirt with coat & tie.  it was funny to watch them walk in dressed to the nines from the waist up, but with shorts and flip-flops. 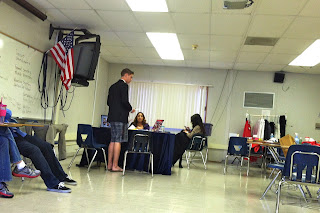 despite running about ten minutes late for our appointment, we ended up waiting about that long for her turn.  i was just glad our tardiness didn't result in a rescheduled shoot.  best to get it over with, i thought.  and when they called her name, i tagged along and sat at a desk in the corner behind the tripod.

did i take pictures?  um, duh.  is the pope catholic?  and true to form, are they terribly blurry and bad?  duh x 2.

the photographer started off mildly amused at our antics and giggles and silly jokes, but wasn't thrilled to see that i was snapping away with my phone.  you know what, buddy?  i just handed your ass $80 just to take these pictures.  i'm gonna end up tossing more cash your way once the proofs are in and i want actual prints.  it's not like these shitty shots i got will replace the formal portraits you'll be holding hostage for what i'm sure will cost me an arm and a leg.  his only redeeming quality?  the ever-popular "are you guys sisters?"

as i teased her from my corner, the teen stood awkwardly in those contrived poses while the photographer dude arranged her hair to his liking. 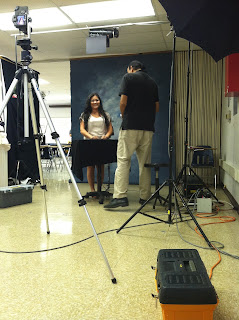 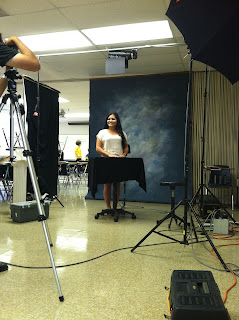 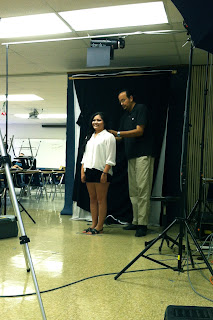 here's what i've dubbed her "showgirl" pose.  not to be confused with the movie "showgirls" - hell to the naw. 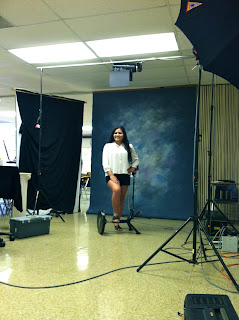 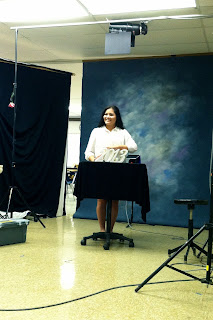 while she disappeared behind the backdrop to don a cap & gown, i gave myself a little internal pep talk to keep from tearing up at the sight of my little girl all dressed up for high school graduation.  she'd given me fair warning that weeping would be completely unacceptable.  plus, i may have participated in the giggling at the sight of other moms who'd been so overcome at their pweshus wittle babies in the traditional graduation ensemble.  so i held it together and ended up cracking up like mad as she reappeared in all her scarlet glory. 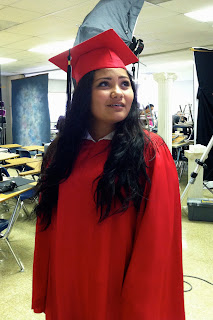 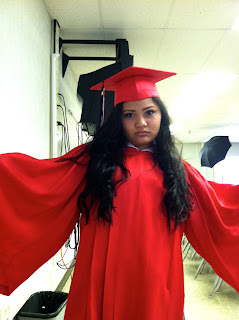 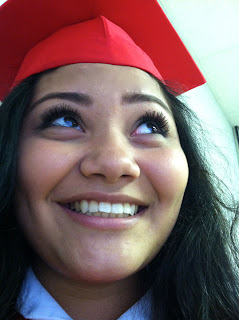 you knew i was gonna do this.  hey, at least it's not my stupid face. 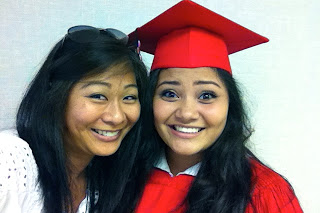 one last shot, and she was done.  "word," i called out as she followed the directions and struck this super lame ass pose. 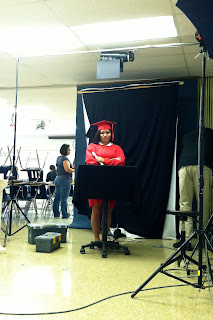 two long weeks, and we'll get the proofs.  knowing her, she'll hate the majority of them.  and knowing me, i'll want multiple copies of every single shot.

Email ThisBlogThis!Share to TwitterShare to FacebookShare to Pinterest
Labels: photo shoot, stop growing up so freaking fast, the teen is a senior