okay, i have the dance recital extravaganza to cover.  tomorrow.  i'll do it tomorrow.

because right now i need to work through my feelings about the bean and the e-mail i got notifying me that she's been accepted into a transitional kindergarten class...starting in two months.  see how excited she is about it? 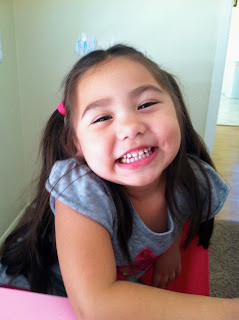 of course, she has NO idea as to what's in store for her.  heh.

let me rewind a couple of weeks here.  while chatting with her preschool BFF's mom during the kids' "spring sing" performance, i asked her if BFF was going to do another year of preschool or start kindergarten in the fall.  as she answered (it was the latter), she asked me if we'd considered putting the bean into a new program that was somewhere between pre-K (which is what she's in now) and kindergarten.  i knew nothing about it, so as soon as the program was over i headed right over to the office to get more information.

but because the staff and teachers in there were a little overwhelmed with all of the end-of-the-year activities, i was directed to check out the school website to get more information and complete an application.  hey, whatever.  i'm good with doing my own research at my leisure anyway.  so as soon as the bean was down for her nap, i talked to the hub and checked it out.  he agreed that it seemed like a better idea than repeating the year she just finished up, so i completed the application and submitted it online.

before i knew it, i was filling out an evaluation form and making an appointment to have her tested by a third-party company.  apparently, they'd been at the school a couple of months ago to test out a whole crop of kids who were going through the enrollment process and we totally missed the boat.  see, we'd already decided that the bean, while meeting the age requirement for kindergarten, wasn't quite ready for the big leagues yet and would wait one more year to start elementary school.  her teacher had actually recommended this on her progress report.  and so when the parents' meeting about kindergarten had been announced, i brushed it off knowing that we had another year before we had to worry about any of it.  and of course, that's when the transitional program was introduced.  bah.

so one morning last week found us sitting in the car, headed down to orange county for a 9am testing appointment.  we got there right on time and the bean was welcomed into the office by a super friendly lady who probably has a few grandchildren of her own, or maybe did some teaching back in the day.  she seemed comfortable with the lady right away and followed her into another office while i sat outside in the waiting room.

with the door open, i spent the next half hour alternating between listening intently at what was happening in there and catching up on social media via my phone.  the lady did most of the talking - the bean is pretty quiet and soft-spoken, especially in out-of-the-ordinary situations.  first, it was "can you draw me a picture of a person?" and "cut out this circle along the dotted line."  then they moved on to stuff like drawing a straight line, pointing out the things that don't belong, filling in the missing part of a face, matching words, building with blocks, and memory games.  the last part was physical - balancing on one foot, showing left and right hands/feet/arms/etc., hopping on one foot, walking backwards.  she seemed to do really well through the whole thing.

as we started the trek back home, she told me all about the games she'd played.  "it was fun, mommy," she said as she munched on a snack.  while i listened to her explain in full detail what they'd done, my mind raced ahead to a stop we could make at an asian bakery i've been wanting to try for ages.  it was on the way home, and we had just enough time to make the pitstop and still get back on time for gymnastics class.

while i sipped on my iced sea salt coffee (sounds weird, i know, but OH EM GEE SO GOOD), she dug into the egg tart i'd picked up for her. 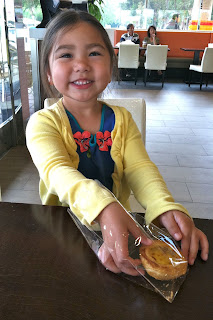 sorry, that was way off-topic.  anyway, the lady had told me that we could expect results to be faxed over to the school by the next morning.  i knew the clock was a-tickin', with only a few spots left in the class before we'd be totally assed out.  so after i picked her up from summer school yesterday, i was about to pick up the phone to call the school when i clicked on my gmail and saw it:  the e-mail that began with "we are pleased to welcome..."

the bean, my last baby, the little girl who's grown up so stinking fast, is officially done with preschool.  this tiny person who's brought us all so much joy and laughter and happiness is about to embark on a whole new adventure, and i honestly don't know how to feel about it all.  on one hand, i'm super excited for what's to come - honing those skills, continuing with her education, getting a good start on what her sister's on the brink of finishing.  and then i'm filled with sadness as i think of how the time we get to spend together every day is shrinking.  come august 22nd, she's going to be in school for twice the length of time as before.  and she'll be there five days a week instead of just MWF.  no more fun tuesday mornings at disneyland, sleeping in on thursday mornings, random trips to the park.  and what about her afternoon naps?  being in school till 2:30 will either wipe those out completely, or shift her naptime to an hour when she's usually getting up. we've got just two short months of freedom, and then reality will set in...hard.  and we'll join the ranks of those families who have to schedule every vacation and appointment around the school calendar.

i know.  i KNOW this is a good thing.  she's going to gain more independence, meet new friends, learn new things.  i'll be able to get more done around the house (because let's face it, the three hours she's in school now is nothing), or maybe even get a part-time job.  and we'll settle into a routine that we're going to be following for years to come.

but oh, how my heart aches at all of these changes.  it's all happening too quickly, and the time has gone by in the blink of an eye.  i mean, it wasn't that long ago that we were waving goodbye on her first day of preschool.  and all of a sudden, we're getting ready to buy her first set of school uniforms and pack her first lunch box.  what?  can't we just go back to the days when i got to snuggle her in a baby carrier for hours on end?  i want to turn the clock backwards and keep her little for just a while longer.  honestly, i don't know if i can handle all of this and let go.

although we all know i will.  because i have to.  just like all of the other changes we've dealt with, we'll sail through this transition with flying colors and everything will be fine.  we'll keep laughing through every day, and my heart, uh...will go on.