oh mah gah, this weekend was a whirlwind of craziness.  for real, yo.

friday's costume check and run-through was out of freaking control.  we arrived at our call time only to find out that they were running at least an hour behind.  the other moms and i huddled in the corner, bitching and moaning about the inconvenience and how annoying it was to stand around trying to keep a bunch of 4-year-olds entertained.  after a while, we learned that it wasn't a mandatory thing and decided to get the hell outta dodge.

but the experience wasn't completely a waste of my time.  as we chatted, another mom came by with her daughter, who was also in the bean's dance number for the recital.  she had these perfect curls that totally fit the bill for how we'd been asked to do the girls' hair - high ponytail, all spiral-curled and sprayed to "toddlers & tiaras"-style perfection.  when we ooh'ed and aah'ed over it, the mom grinned and plucked the whole crop of curls right off of her kid's head.  for $25, she'd eliminated the headache and time it'd take to get the hair just right and the 'do was done in about 3 minutes flat.

after a quick call to the dance supply store to confirm that they still had the hairpieces in stock (and in the right color), i bundled the bean into the car and hightailed it right down there before they closed for the day.  since i'd been ready to spend $25 on a curling iron and super duper strength hair spray anyway, i was more than happy to plunk it down on something that would lower my stress level immensely.

the next morning, after taking the bean to pick out her own make-up for the stage, i turned on a movie for her to watch and got down to business.  first, i brushed all the tangles out of her mane - it's gotten so long. 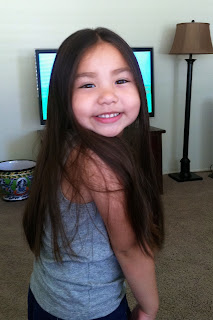 using some detangler spray, i scraped it all back into a high ponytail. 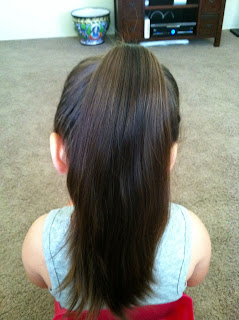 and then with the help of a little gadget i'd also picked up at the dance store, i had an almost perfect ballerina-style bun in about 30 seconds. 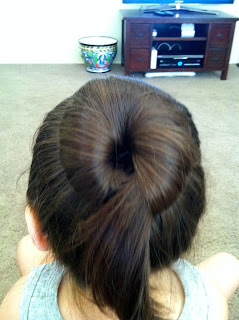 next, i carefully plucked the curly hairpiece out of the bag.  "i have a wig!" the bean squealed with glee. 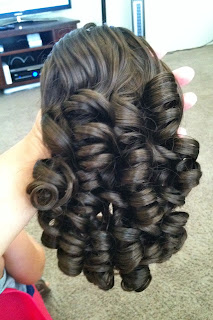 it seriously took about 4 seconds to get it in place.  voila: 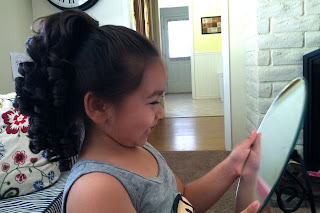 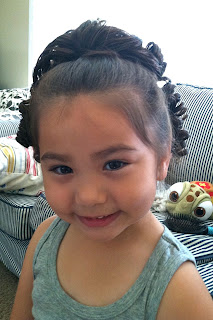 i think the bean is the only girly-girl i know who didn't really have any interest in make-up.  she watches me and her sister put it on every day, but i don't think she's ever asked to play with it or put any of it on herself.  she's played with her grandma's make-up once or twice, but that's about it.  and so i had to actually talk her into letting me put some on.  here's what i was able to get away with: 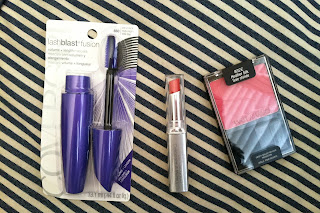 i decided to tackle the most difficult item out of the three.  i tried to show her the difference between the eye i used it on and the unmade-up one, but she glanced in the mirror and said "i don't see a thing."  see how excited she was about it? 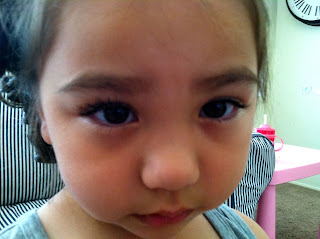 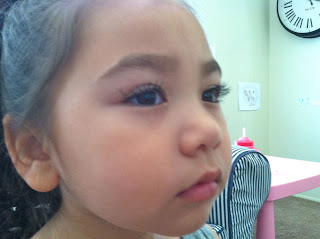 then i brushed on some of that bright pink blush and stroked a bit of that super red lipstick on her tiny pout. 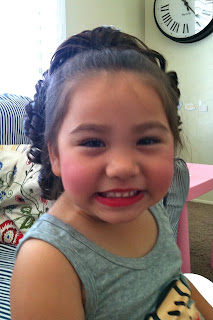 as she gazed in the mirror, the bean gave her appearance a special stamp of approval. 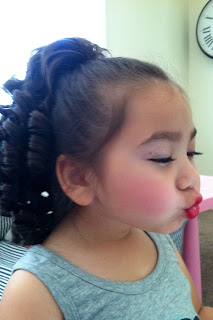 Email ThisBlogThis!Share to TwitterShare to FacebookShare to Pinterest
Labels: dance recital, the bean gets a makeover