on saturday, my friends lilcee, dailygluttony, kelley and i got together at the rose bowl for the liz logelin foundation 5K.  now, the "real" 5K actually took place that same day in minnesota, where matt and liz logelin were born and raised.  but by registering for  the "walk around the world" option, we received an official tee to rock during our walk.  despite having been out late the night before, the teen joined us as we did our loop and was coherent enough to take a couple of photos for us. 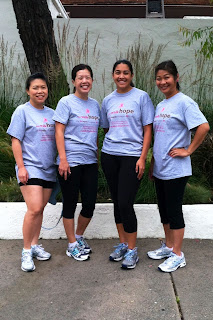 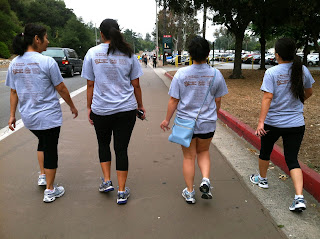 it was really nice to walk the 3.1 miles while chatting with the girls for a change.  i'm usually so antisocial when i'm working out, so being able to slow down and not think about my pace or breathing was pretty fabulous.  we kept up a steady, brisk pace and finished in exactly an hour.

dailygluttony and i had left our kids with mr. lilcee, who was such a great sport about staying at home to babysit.  they all play as nicely together as their parents do, so we were hopeful that they wouldn't run him ragged.  when we got back, it was hilarious to see what they'd been up to. 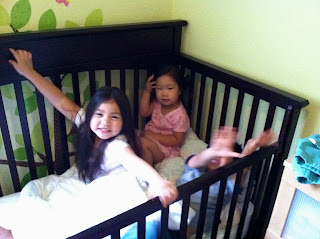 apparently, the bean and mini cee had a ball playing in the crib, even napping for a little while together in there.  pretty comical, considering i couldn't bribe the bean to sleep in her crib when she had one of her own.  hmph.

we decided to head out together to mike and anne's in south pasadena for brunch.  funny, the last time the teen came with us to this place was when we had that long duck dong sighting.  we didn't have anything as exciting as that this time around, but that's okay.  we were all pretty hungry, so we may not have even noticed had there been another celebrity in our midst.  while we waited for the grub, i was pretty happy to sip this: 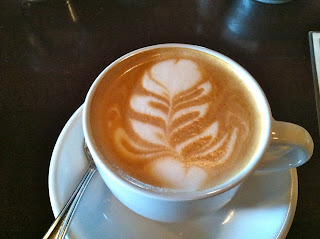 from their tweets and facebook posts, it sounds like the "real" 5K had a great turnout and was lots of fun.  since proceeds from our registration fee benefited the foundation and we got to have a great time doing our own mini-5K, it was a total win-win situation.  and it totally covered my workout for the whole 30-in-30 thing!  sweet.
at June 11, 2012