can you believe it's been a whole year since this? 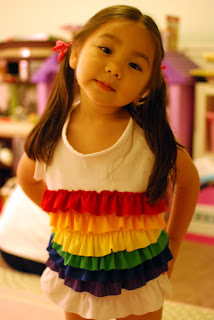 since the party for the last day of school was again rainbow/hawaiian-themed, she got to rock that top for the last time.  her big ol' head barely fit through the neckhole, so i'm pretty sure after we wash it, it's gonna have to go into the giveaway pile.  sadness.

anyway, when i went back to pick her up after school was over, i found her happily bouncing with her friends in the jumper that they'd rented for the day. 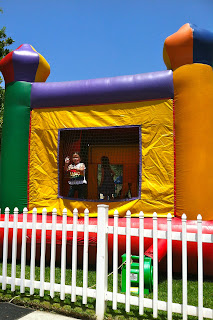 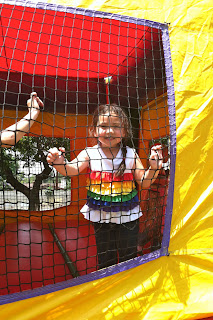 she was all sweaty, with her little baby hairs plastered to her sticky ass forehead, and having a ball.  her teachers told me that she'd enjoyed a corn dog and other delicious treats during the party, so i wasn't in a huge hurry to get her out of there to come home for lunch.  besides, there was nothing in the world i could've bribed her with that would've gotten her out of that thing anyway.  she and her homies were having way too much fun, and knowing she might not see some of them again (headed off to kindergarten in other schools), i just let them be. 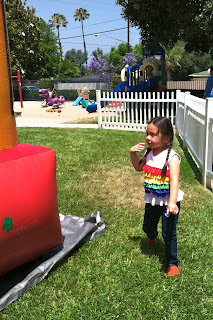 while chatting with one of the other moms last week, i learned about something called "transitional kindergarten" - a class that's basically somewhere between pre-K and kindergarten.  it's set up to accommodate kids with birthdays right around the cutoff date for kindergarten enrollment, and the bean is definitely one of those.  she turns 5 on october 1st, and while the cutoff is november 1st, we've known all along that she isn't ready for the big leagues yet.  her teachers agreed - although why they didn't tell me about this option, i don't know.  a quick trip to the office answered most of my questions, and i went right home to complete the online application.

the next step in the process is to have her tested by a local company that specializes in kindergarten readiness assessment.  quite a mouthful, huh?  anyway, we've got an appointment to get her evaluated next week.  i have no doubt that she'll pass with flying colors, and so it looks like this was her last week of preschool.  holy crap.

while she was still in the jumper with a couple of friends, the blower inexplicably shut off.  as the walls began to collapse around them, they squealed and hopped out of that thing like it was on fire.  but like titanic's rose, she just couldn't let go. 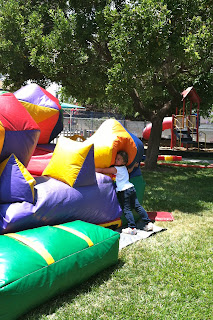 i wanted to schedule a tour of the school campus so that she and i could walk around and get acquainted with the layout and such, so we headed back to the office to talk to the admissions coordinator.  on the way there, we ran into some visitors who were there for the elementary school's last day of school party. 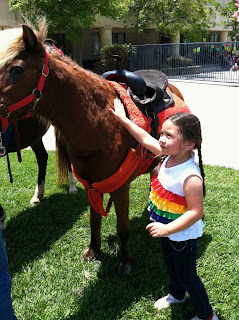 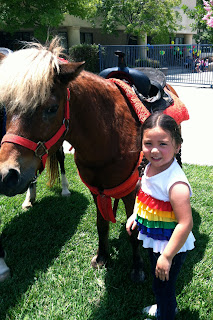 after all that jumping and eating and excitement, this little girl was visibly tired on the way home.  and it wasn't very hard to get her to take a nap when we got there.  yikes.  when she starts this TK class in the fall, it's an all-day program - starting at 8:30 and going all the way to 2:30.

Email ThisBlogThis!Share to TwitterShare to FacebookShare to Pinterest
Labels: bean goes to school, rainbows are fun, stop growing up so freaking fast