monkey bread.  yes, i've done it before, but for father's day breakfast i wanted to try something a little different.  i'd seen a post by picky palate on a tooth-achingly sweet take that involved mini rolos and s'mores, but it was actually too much for me.  crazy talk, right?  and i wanted to try to make it at least a tiny bit less bad for our health.  heh.

using her recipe as a guideline for basic instructions and such, i busted out my ingredients. 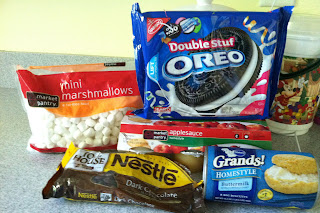 then i put some of those oreos into a plastic bag and gave it to the bean to go to town with a fondant rolling pin.  she was more than happy to oblige. 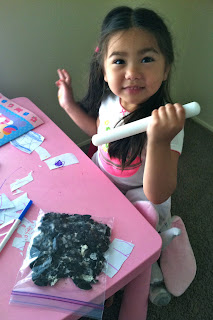 the biscuits were chopped into fourths. 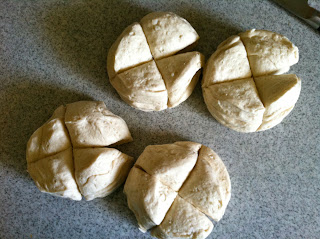 those crushed oreos and biscuit pieces were dropped into a bigger bag, joined by some applesauce, and had a party.  after lining a pan with my favorite parchment/foil combo, the whole mushy mess went in.  looks like poop, doesn't it? 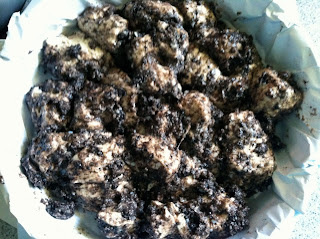 then i topped it with a handful of mini marshmallows and chocolate chips, and into the oven it went. 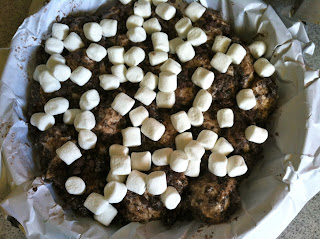 because i didn't want to make a whole bowl of glaze to drizzle on top, i went into the freezer and fished out an extra packet of that frosting you get when you buy toaster strudel.  yes, i love that stuff.  thank you, gretchen wieners.  anyway, it was just the right amount i wanted. 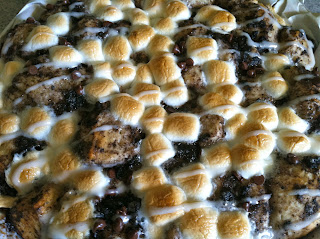 mmm, toasty marshmallows.  and you know what?  this concoction turned out really well!  so well, in fact, that i'd totally make it again.  and confession:  it was just as good the next day.  maybe even better.

wanna make some for yourself?  as long as you aren't amanda robertson, that is.  since, you know, i did use some store-bought crap in this "recipe."  hmph.

1 8-count roll of biscuit dough
about 8 oreos, regular or double stuf.  i used the latter
a single-serving cup of applesauce
1/2 cup-ish of mini marshmallows
1/4 cup-ish of mini chocolate chips
a packet of glaze out of a box of toaster strudel.  or you can make your own.

preheat the oven to 350 and line a round 8" or 9" pan with parchment paper.  put the oreos into a plastic bag and smash 'em to smithereens.  cut the biscuits into fourths and add them to the crushed cookies along with the applesauce.  you don't have to use every bit of the applesauce in case it gets too mushy - just eyeball it.  roll the whole mess around in the bag until each piece of dough is covered in cookie crumbs.  you can always add more cookies if you need to.  pour it all into your prepared pan.

sprinkle the mini chocolate chips on top, followed by the mini marshmallows.  the amount you use of these things is totally your call - maybe you'll want more, maybe not.  completely up to you.  i, on the other hand, was trying to keep it from getting too crazy and focusing on it being "healthy" since i'd replaced the butter with applesauce.  ah, so sneaky.

bake it for about 25 minutes.  but keep an eye on it.  about halfway through, i found that the marshmallows were toasting too quickly and covered it lightly with a piece of foil for the most of the baking time.  with about a minute left on the timer, i took the foil off to let the marshmallows turn a lovely golden color.

drizzle the glaze on top.  if you aren't a total sucker for toaster strudel like i am, you can make your own with about 1/2 cup of powdered sugar and around a tablespoon and a half or so of milk.  scoop it out onto a plate and enjoy. 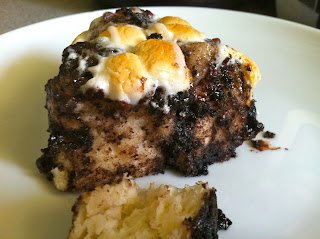 ooh!  and this is cool - the l.a. times food section does a weekly "weekend eats" twitter spree on mondays.  basically, they have you tweet them with pictures of stuff you ate over the weekend.  i shared that picture right up there, and they mentioned me in the weekend eats roundup.  yay for me!
at June 20, 2012