as of wednesday at about 10am, the teen is officially a high school senior!  woohoo!  go class of 2013!

scary shit, ain't it?  heh.  but exciting too, and she was visibly relieved to have her finals over and done with.  now she can enjoy a summer of fun before starting her final year of high school.  well, and get through the admissions process for FIDM.  we've got a lot of work to do there.

and so to celebrate her senior...ness, you'll never guess where we spent the day yesterday!  yup...the happiest place on earth.  but this time, we decided to do it a little differently - we vowed to do stuff that we either never do or haven't done together in a long time.

first:  dumbo the flying elephant ride.  this we often skip mostly because the line is always so stinking long.  but as we learned yesterday, it may look bad from the outside, but once you're in there it actually goes pretty fast. 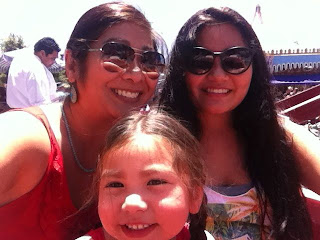 did you know that there's a petting zoo at disneyland?  it's tucked way back between frontierland and fantasyland. 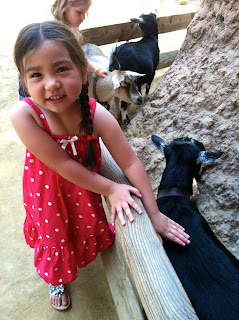 from there, we headed over to ride one of the steam-powered riverboats.  the bean had zero interest in riding the "pirate ship," so we hopped onto the mark twain instead. 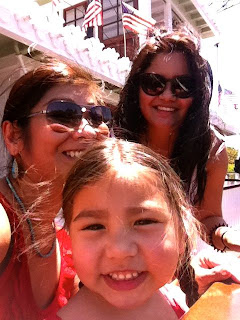 since we'd seen a group having fun paddling away on one of the canoes, that was our next ride.  i could swear that i'd never actually done this before.  maybe once, when i was really little, but i don't remember. 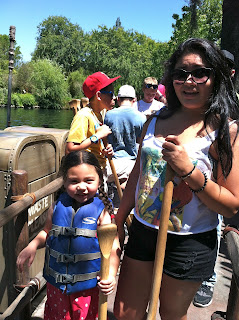 after a mini-meltdown in one of the shops (the bean falls in love with a new stuffed toy every time we go, and i've vowed not to give in every time), we managed to bribe her with a treat out on main street.  we munched on our cold treat while sitting on the curb waiting for the parade - another thing we pretty much never do. 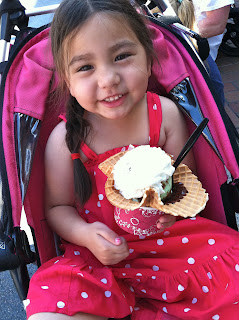 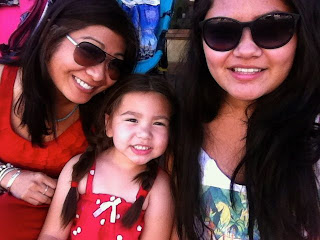 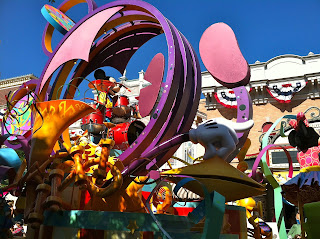 tomorrowland was the next stop, where we played in the buzz lightyear ride.  afterwards, we decided to check out the "innoventions" building, which used to house the "america sings" show.  i remembered watching that way back when i was a wee one.  it was hilarious watching the teen get all discombobulated when she realized that as we walked around the exhibits in the center of the building, the outer section rotated around us.

you know, back when that show still performed throughout the day, one of the cast members was crushed to death when she found herself trapped between a rotating wall and a stationary one.  she stepped a little too far back and no one realized what had happened until a guest reported hearing screams from behind the stage.  creepy, huh?

innoventions consists of a bunch of interactive games and displays, as well as a stage show that showcases honda's "asimo" robot.  it was cheesy and cute, and we loved it. 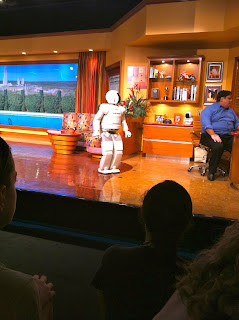 the lower level of innoventions consists of what they call the "house of tomorrow."  it's set up like a fabulous family home, complete with every gadget and computerized gizmo you can imagine.  we all loved the girl's room, where the mirror reflected an image of you standing there in front of the webcam.  it served as a touchscreen computer, where you could pull up weather, music, calendar, and other fun stuff. 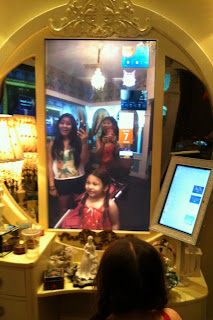 we enjoyed dinner in a quick-service restaurant at the end of main street, which we'd never tried before.  you know, to continue the theme of the day.  and it was so good i didn't even get to take pictures of what we had - grilled cheese with tomato-basil soup, mac & cheese, ham & cheese quiche.  yummy.

the bean, who hadn't napped all day, was spent.  she passed out cold before we even got out of the parking structure.  awesome.

and just think, this is only the beginning of what promises to be a splendid summer!
at June 08, 2012

Email ThisBlogThis!Share to TwitterShare to FacebookShare to Pinterest
Labels: disneyland, stop growing up so freaking fast, the teen is a senior