if you're anything like me, you'll immediately recognize that as the opening bars of the theme song to the most awesome teen drama that ever was.  i'm talking, of course, about 90210 - the OG version.  the one with minnesota twins brenda and brandon, transplanted into snooty ass beverly hills and their friends steve, kelly, donna, david, and my personal favorite character - dylan mckay.  swoon.

i was so incredibly obsessed with this show back in the day.  like, i had a dylan poster on my wall, my house key was on a matching keychain, and although i was glued to the tv every thursday night i still set the VCR to tape each episode so i could rewatch them to my heart's content.  i stayed a loyal fan through all ten seasons, and i bawled my eyes out when donna and david got married on the series finale.  yup, i sure did.

so you can only imagine my delight when this old navy commercial started airing:


like, i literally swooned when jason priestley and luke perry appeared onscreen.  i should probably be ashamed of myself here, but i'm just not.  it was like 1991 all over again.

now, because i love old navy anyway and find myself dropping ridiculous amounts of cash there for me and the bean, i "like" them on facebook.  and as i was perusing my feed on thursday afternoon, something jumped out at me:  something called the "bluesology pop-up denim boutique," a 3-day event in l.a. where ON "experts" helped attendees find the perfect pair of jeans and take them home for free.  a freebie?  hell yeah!  but i honestly didn't even notice the free jeans part, because the next line read like this:

Friday only, we’ll have special guest appearances by Luke Perry from 12-4pm, and Gabrielle Carteris from 2-4pm.

jigga-whaaa??  did you hear the screeching brakes noise in your head like i did?  i damn near lost my mind.  and despite the fact that it was friday afternoon, which usually means hellacious traffic heading out towards hollywood - plus my need to be home by 6 for a stella & dot trunk show i had scheduled that evening - i knew i had to go.  HAD. TO.

when i showed the event listing to the teen, she lit up like a christmas tree.  "free jeans?" she squealed.  "let's GO!"  i was so amused that we were giddy about this thing for two very different reasons - and that i hadn't seen the free jeans, and she had no idea why i was so excited for those special guest appearances.  so awesome.

we headed out as soon as we picked up the bean from school, and because we were going against traffic we managed to get there pretty quickly.  for a pop-up shop, this space was pretty spruced up for a three day gig. 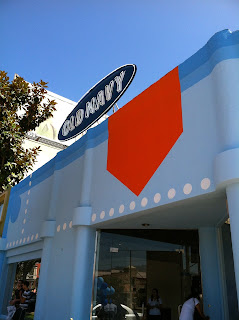 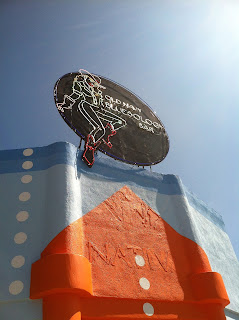 street parking was shockingly plentiful, and we were greeted at the door by a bubbly, smiling old navy staffer who handed us these: 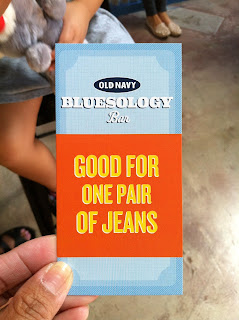 it was a pretty cool space, and there were all sorts of fun-looking displays set up.  and i'm guessing that because most kids are back in school and it was still mid-afternoon, it wasn't particularly crowded. 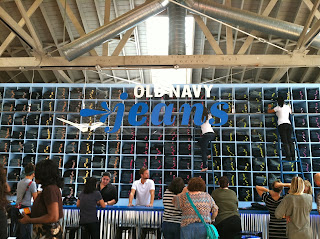 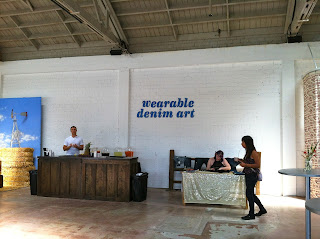 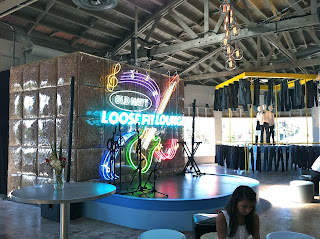 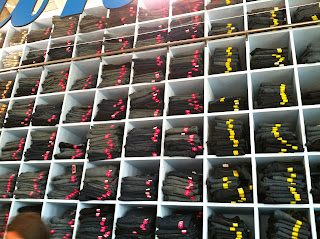 and then i spotted him, standing near the jeans bar chatting casually with a couple of folks.  my heart nearly pounded right out of my body and i seriously got the shakes.  i was SHAKING, people!  like, i held my hands out for the teen and they were a-tremblin'.  he was right there! 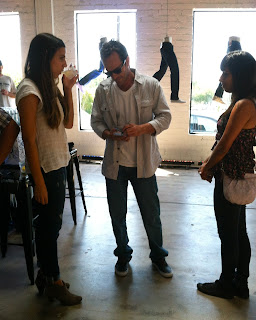 it was ridiculous, you guys.  i was sweating and nervous and shaky and my head was spinning like i'd downed a dozen shots.  but come ON.  it was dylan mckay, he of the smoldering stare and oh-so-cool sideburns, no more than five feet away from me!  i don't know what i'd been expecting - maybe that he'd be standing in some roped-off VIP-style area or something - but it sure wasn't to find him just standing there where just anyone (i.e., me) could approach him whenever they damn well felt like it.  and i couldn't move.  my feet were glued to the floor and i felt like i was going to pass out right there in front of him.

so i went for a warm-up instead.  i approached gabrielle carteris, former talk show host and ex-ahhhhhndreeeaaaah zuckerman, introduced myself and the girls, and asked her if i could take a picture with her.  she was really sweet, pointing out her own daughter to us and chatting with us briefly before the teen snapped this: 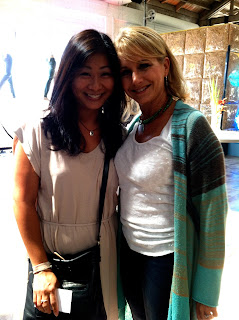 when she walked away, i turned to the teen and said "i'm so freaking nervous.  i don't know if i can do this."  you'd have thought i was doing something incredibly life-altering (duh, it was).  i'm so lame.  and when she nudged me and said "just go," i sucked it up and walked over to him.  i said something really dumb like "hiohmygodiamsuchahugefanicantbelieveiammeetingyouholycrapifeellikesuchadorkandiamsonervous."and then probably a bit of "itslikeiamliketwelveyearsoldorsomethingandmynameiswananditissofreakingawesometomeetyou."

and he was such a good sport about it.  he grinned at me, standing there melting into a puddle (pretty much literally, i was sweating my ass off) in all my three-pimples-on-my-face and super shiny, sweaty nosed glory, said "hi, i'm luke and it's really nice to meet you" and grabbed me in a big ass bear hug.  he gestured towards the teen and said "let's take a picture, shall we?" and here's my proof that i actually met luke perry: 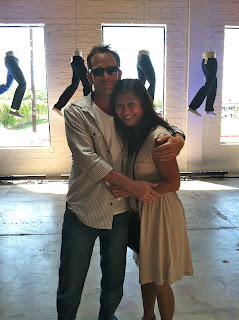 and this one, too: 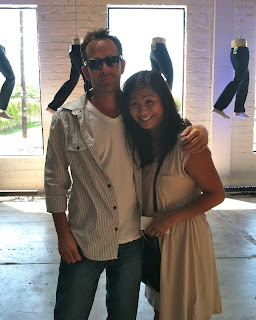 he must've noticed that i was still shaking like a damn leaf because he squeezed my shoulder and said "it's okay, you're such a sweetheart!"  oh mah gah, he's so lucky i was so discombobulated and didn't just hump his leg right then and there.  all i needed was that convertible porsche speedster to make it complete.  i asked him what he was up to, and he said "ah, i'm raising my kids!  i've got one in high school and another in junior high, and when they're done that's when i'll go back to work."  i suppose i chatted with him for another minute or so and then thanked him for his time and floated away on cloud effing nine.

when i finally came back down to earth, we headed back over to the jeans bar and picked out a pair to try on in their makeshift fitting rooms. 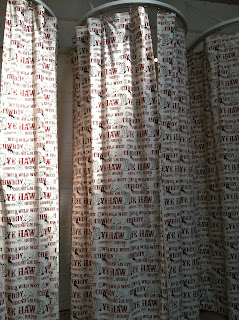 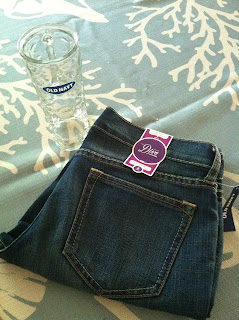 as the teen was trying her jeans on, the bean and i sat down with luke in the photo booth.  i hope the hub doesn't smack me for this one - it kinda sorta looks like a family photo, heh. 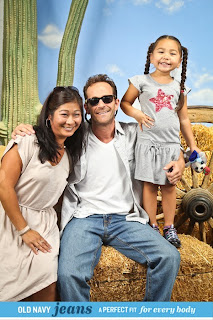 and hey, old navy?  even though i already love you to death for your fun and inexpensive merchandise...you've got a customer for life in me for this one.  FOR LIFE!
at August 27, 2012