the quest to keep the bean as busy as possible and expose her to all sorts of different activities continues.  the newest thing?  golf.  oh, yeah.

"there are lots of golf scholarships," the hub told me.  we actually had this conversation a while ago, but when i saw via facebook that my cousin had his daughter in golf camp this summer, i figured it was worth a shot.  and the class that i found is actually meant for kids starting at age 5, but when i called and talked to someone at the course, i was given the OK since her birthday is coming up.

the class starts at 8:30, which works quite nicely with her hip-hop dance class at 10.  and she was excited for her first golf class.  she's gone with the hub to sport chalet, where she loves to grab a club and play on the little putting green setup (which is likely for trying out various golf clubs, but whatevs). we got there, checked in, and she gave me the crazy fire marshal bill-style grin as she clutched her borrowed club. 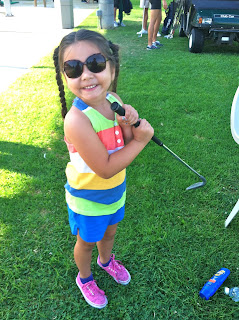 i probably shouldn't have been as surprised at how many kids there were in this class - after all, it is only $5. 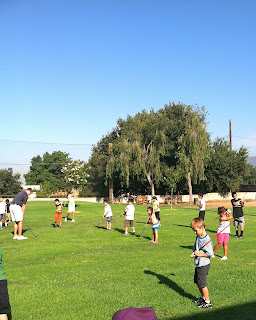 it was really hard for me to keep from running over to help her or remind her to pay attention and listen to the instructors, but i did.  i distracted myself by chatting with one of the dads who had a daughter about a year older than the bean.  and it was fun watching her focus so intently on swinging that club properly. 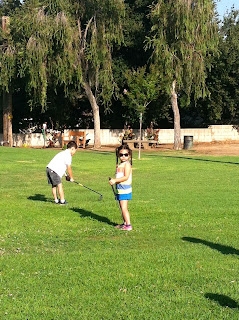 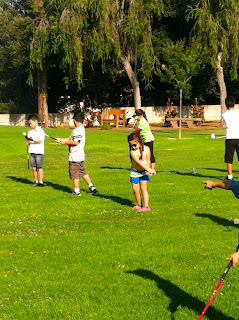 after some stretching and basic instruction, the gigantic class was split into two groups - half went to the putting green, the others to the driving range.  the bean was in the latter group. 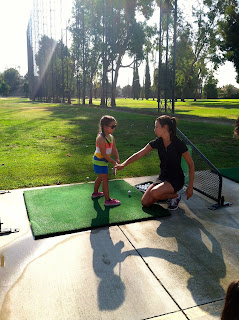 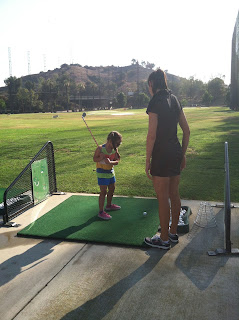 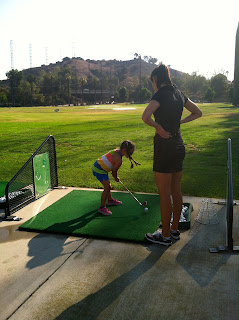 check out that form!  proud mama bear, i was.  and she even managed to hit the ball - oh, about every other attempt.  heh. 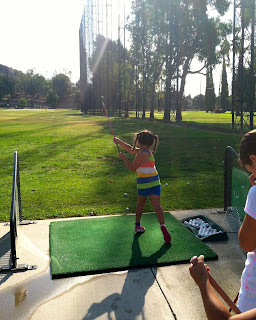 with about 15 minutes of class time left, they switched places and she lined up with the rest of her group to try putting. 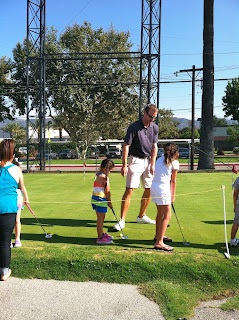 all in all, it was a pretty darn successful first attempt.  i'd been told to ask the instructors after class if she was able to hang enough to continue on, and i was happy when they assured me that she was good to go.  she'd had a great time, and talked about it for the rest of the day.

i wonder how long the hub will make us wait before she gets to take a trip to sport chalet for her own set of clubs.  she's already picked 'em out, even. 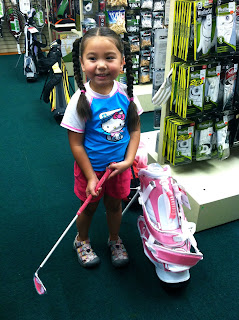 Email ThisBlogThis!Share to TwitterShare to FacebookShare to Pinterest
Labels: bean is a golfer