i love that the teen is usually game to join me on whatever harebrained scheme i've got going on.  and this month's activity of choice was something definitely new, different, and exciting:  stand-up paddleboarding (SUP).

as i usually do, i decided to poll my friends via twitter as to who'd done it before and how they liked it.  i really didn't get a whole lot of responses, but my friend yahpee was enthusiastic and encouraging (as she always is).  she said she'd done it before and really enjoyed it, and thought that i wouldn't have any problems with it.

now, my biggest issue is that i'm not a very strong swimmer.  like, at all.  but after seeing a picture of eva longoria in an issue of us magazine wearing a life jacket while paddleboarding and still looking fabulous, i decided i wanted to give it a try.  what can i say, i'm easily influenced.  and vain.  sue me.

with the ILs still in town, i hit 'em up to pick the bean up from school so that the teen and i could head down to the beach in the morning.  then acting upon a tip from yahpee, i managed to find a groupon deal for a company down on balboa island that was offering a SUP lesson and board rental for two for $75.  sold!

and then i decided to get really crazy and make it a super fun day for me and my girl - waaaaay back in 2010, we'd bought groupons for a segway tour in huntington beach.  of course, it technically expired over a year ago - but when i'd called once to try and schedule it, the guy told me that they'd honor them whether they were expired or not.  and before you call me out on it, yes - i do realize that in california these things don't really ever expire and the amount paid for the groupon is always valid.  but what we paid and what the tour actually costs are two different things, ya dig?

so anyway, i called up the segway company and scheduled us a tour for about a half hour after i figured we'd be done with the paddleboarding.  the teen thought i was insane, but i figured we'd already be down there with the bean happily bonding with her beloved grandparents.  why not?

we pulled into the parking lot at balboa pier a good half hour early.  but since the guy i'd talked to seemed pretty nonchalant about what time we started, we headed over to see if we could get an early start.  and as we walked up, there was already a group of four waiting to get started.  luckily, the guy told us he had plenty of boards and motioned for us to join them.  yay!

confession:  by the time we locked up our bags and were standing on the dock waiting for our turn to step onto a board, i was kinda sorta really super duper nervous.  remember, i'm not a good swimmer - and i actually despise going underwater and having my whole head wet.  but a bit of small talk with the couple in front of us revealed that this was their first time too, and the girl was just as nervous as i was.  when they managed to get on their boards and paddle away without any mishaps, as did the teen in front of me, i gained a little confidence.

because i wasn't sure if i could trust myself to bring my phone with me on this adventure, i have zero pictures.  well, unless you count this one i took of the shot the teen got with her waterproof camera.  sadly, we can't find the cord to download the photos she managed to take, so this'll have to do. 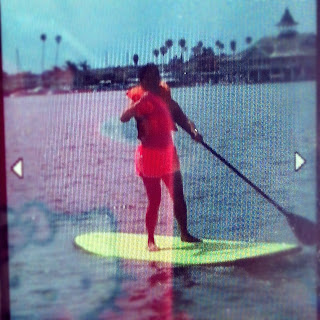 i'm definitely no eva longoria, but i don't really care.  however, i'm pleased to report that i had a great time and didn't fall once.  we paddled all the way from the ferris wheel, across the harbor, around balboa island, through a channel, and back to the pier.  i freaked out a few times when biggish boats glided by, making waves and causing the front of my board to bounce up and down a bit, but i managed.  we were out there for a good two hours, and it felt like we'd only been out there for half that.  it's a great core workout, and i'm actually chomping at the bit for another chance to do it again.  oh, and as for that lesson?  well, the guy explained the basics to us in about five minutes and further instruction was totally unnecessary.  this left us lots of time for exploring the waters on our own, which was awesome.

since huntington beach was only about ten minutes away, we had plenty of time to get back in the car and head off for our next activity.  even with extra traffic from the us open of surfing going on that week, we still got there with time to spare. 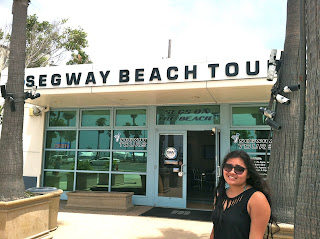 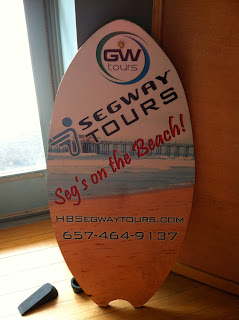 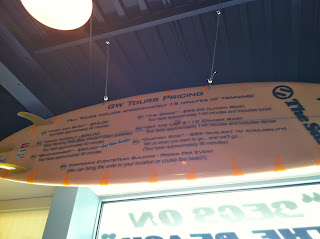 we walked in to find a lineup of about a dozen segways, and i zeroed in on the most perfectest one just for me: 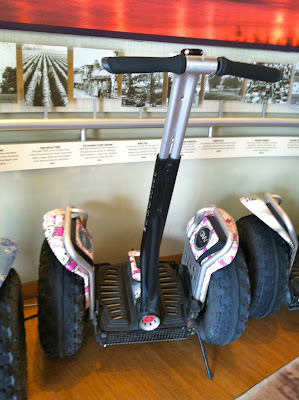 can you see the design?  yup - it's HELLO KITTY.  how awesome is that?

we were given waivers to sign and then sat down to watch a safety video that was more comical than informative.  after a quick tutorial on how to work the thing without killing ourselves, we were off. 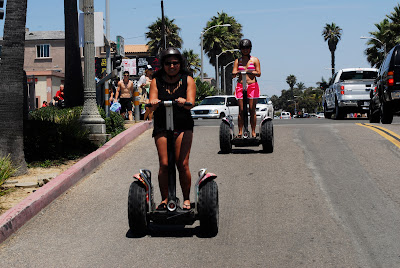 we were instructed to strike a "tyra banks-style" pose for this one.  yeah. 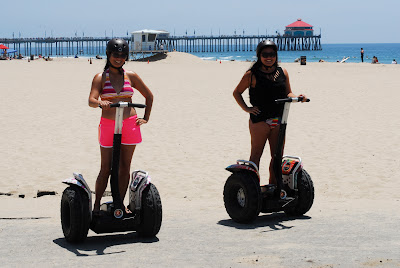 after my confidence level was sky-high from the successful SUP expedition, it plummeted right back down into the dirt as i damn near ended up with a mouthful of sand. 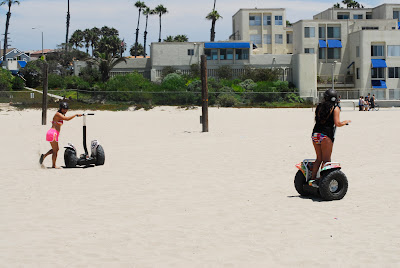 well, okay, it wasn't really that bad.  i just had to step off of the segway when it threatened to fly right out from under me, and i'm glad i was in soft sand rather than on the pavement.

riding down by the water was fun, especially when we got to zoom through a flock of seagulls (crazy 'do not included). 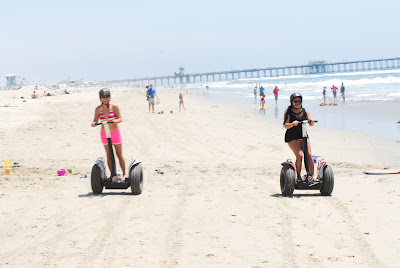 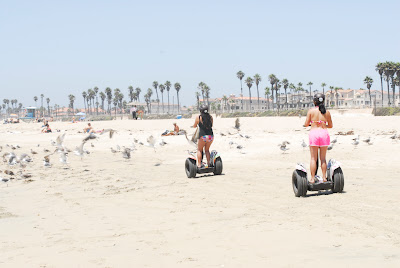 we cruised along the beach and then headed up to the bike path, noticing people pointing and commenting the whole way.  i suppose it would be kind of eye-catching, a line of three people on segways riding down the street.  and we totally felt like grade-A dorks riding on those things with those dumb ass helmets on our heads.  i mean, let's face it - we know damn well the teen and i would have been making snarky ass comments if we'd been sitting on the beach and these things went by.  so all we could do was grin sheepishly as we rode by.

i swear, we were told to pose like this here. 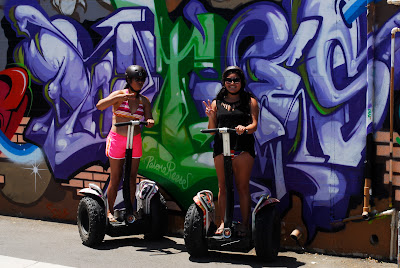 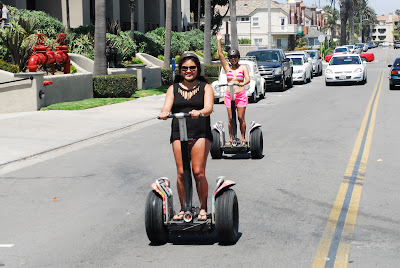 the other nice part about this tour was that the guy brought a camera and took all the pictures, then burned them right onto a CD for us to take home. 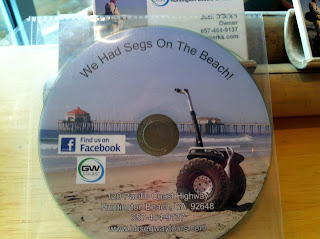 we capped off our day with a visit to nearby fashion island, where the ILs and the bean met up with us before having some dinner at the crab cooker, a family favorite.  well, not really the teen's favorite since she hates seafood, but she had some delicious potatoes.  heh.

and guess what?  i emailed the owner of the tour company, told him how much fun we'd had and hit him up for a donation for our avon walk fundraiser.  within a few hours, he'd responded and attached a certificate good for a segway tour for a group of four.  pretty sweet, right?
at August 08, 2012