i have about a week and a half-ish until the disneyland half marathon.  holy shit.

you'd think i'd learned my lesson after hating life while training for tinkerbell.  uh, and then for the hollywood half.  heh.  but noooo - my stupid ass couldn't stand the thought of missing out on a run put on by disney, and actually signed up for this one even before i'd finished my first half marathon.  i am such a glutton for punishment.

so i've been doing weekly long runs for a few weeks now, starting with a 5-miler and adding a mile every weekend.  i've been pretty good about going out at least twice during the week so that my running mojo doesn't just quit on me, although they've typically been short ones.  i'm finding myself far too lazy to run more than three miles most days.  and my last long run was last weekend, a killer ten mile trek that started at 6:30 in the morning to avoid the intense heat we've been dealing with for about three weeks now (seriously, mother nature, can we call a truce and end this shit already?  please?).  this weekend i'll do a free 10K fun run with the teen, but since we'll have the bean with us too we'll likely just walk it.  this is okay too, since the avon walk is coming up in four weeks and we really haven't done shit training-wise.

one of my rules is to take water with me for anything longer than a five mile run.  except that i noticed that my hydration belt (a pretty fancy way to say "fanny pack," basically) wasn't fitting me properly anymore.  oh, and there's the annoying way that the bottles would leak on me as i ran.  i'd get halfway through my run and find that both bottles were only half full and my ass would be soaking wet.  not a good thing on all counts.  and after a particularly grueling run that had me feeling really crappy when i finally got home, i realized i just needed to suck it up and replace the damn thing altogether.  after doing some shopping online, i found what i wanted at my new obsession:  lululemon. 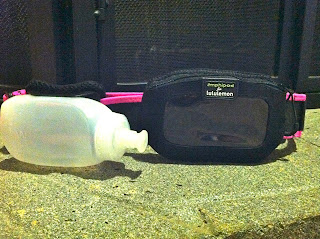 this thing is pretty fantastical.  it has three bottles that can ride vertically or horizontally and a pouch that holds my iPhone perfectly along with a pocket for energy gels and keys.  and since i was also getting increasingly frustrated with my armband that would pinch me as i ran, not to mention making for some freaky ass tan lines, it solved more than one problem.

then i also came to the conclusion that my running shoes needed to be replaced.  i'd been doing all of my races in the same pair i'd bought for tinkerbell and had recently switched to training in them too.  and when i inspected the soles for remaining tread, i noticed that they were pretty stinking worn out.  since i'd received some coupons for dick's sporting goods, i decided to head over there to check out their gear.

except that when we got to the store and started looking around at the running shoes, we were pretty much ignored by the sales staff.  we watched as the dude scurried over to help some guy who walked in after we did, glancing over at us as he passed by.  and when we tried to catch his attention to ask for help, he literally ignored us and didn't acknowledge our presence until i put down the shoe i was looking at and loudly told the girls "let's go, they obviously don't need our business here."  finally he spit out a brusque "can i help you?" and we sashayed past, tossing a "no, we're leaving" over our shoulder on the way out.  asshole.

i took to my twitter app immediately, typing out a bitchy complaint in exactly 140 characters, and received a response from the dicks twitter account within minutes.  i was asked to drop an email to their customer service department, and while i was prepared to shine it on and just head to a different store, the teen totally egged me on by offering to drive while i typed.  ha!

but because i had some really good coupons, we ended up at a different store location, where i settled on this fabulous pair of nike lunarglide+3s. 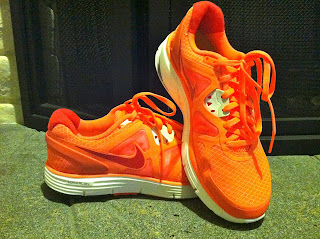 i've never run in nike shoes before - i was told when fitted for my first pair of running shoes that i needed to wear stability shoes.  i've worn nothing but asics for the last year but the only pair that was available carried a $150 price tag, and even with a coupon i wasn't really all about dropping that much cash on shoes.  so i googled these shoes on my phone, and after reading that they're responsive and adapt to just about every type of foot, i was sold.  besides, i wanted some pretty shoes for once, dang it!  those asics were butt ass ugly, and heavy and clunky to boot.  these are so lightweight and cool, i just had to have 'em.  and way less than $150.

so far, i've only been able to do a really quick test run in them - we're talking a mere two miles here - so i'm anxious to give them another shot during sunday's 10K.  they seemed to be okay, but i definitely noticed a difference in the way they felt on my feet, and i want to be sure that they're going to work on the 13.1 miles i'll be doing really soon.

oh, and as for that email to dicks?  i received an automated response as soon as i hit "send," another one from their central customer service department the next day, and then last night one more.  this time, directly from the manager of the store we'd been ignored at - with an apology, a promise to discuss the incident with the shoe sales staff, and a $25 gift card waiting for me at the store.

i guess the squeaky wheel really does get the grease.  thanks, twitter (and the teen).
at August 23, 2012

Email ThisBlogThis!Share to TwitterShare to FacebookShare to Pinterest
Labels: mama needs a pair o'shoes, running my ass off, training