it's been a while since i did a food-related post, huh?  with the heat we've been sweating through this summer i haven't really been inspired to do a whole lot of cooking or baking.  i just saw our electric bill for the month of august and damn near threw up.  eek.

but when i stumbled across this recipe for triple layer fudgy mint oreo brownies (say that three times fast), it lit a fire under my ass to get into the kitchen and make them, pronto.  chocolate mint is one of my all-time favorite flavor combos, and since the rest of the house loves it too i figured it was worth a shot.

here's the basic ingredients - yes, i used a mix.  i was feeling lazy.  sue me. 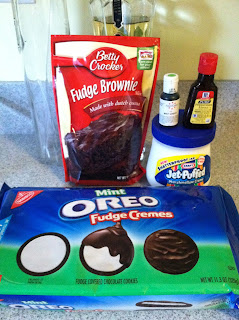 the recipe actually calls for cool mint oreos, but because my rinkydink local grocery store didn't have them, i picked up the only other option they carried.  i figured it still had an oreo cookie and mint flavored creme in it, so it's all good. 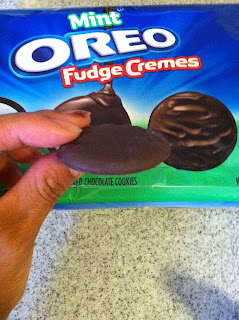 what really sold me on this concoction to begin with was the addition of a minty-flavored marshmallow creme layer.  if there's anything i love more than chocolate mint, it's marshmallow.  yum. 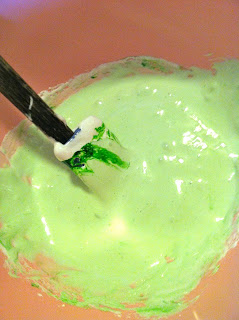 the brownie batter gets mixed up as directed on the package with the addition of some crumbled oreos and then topped with a bit of that minty mix.  a little swirl with a butter knife, and into the oven it goes. 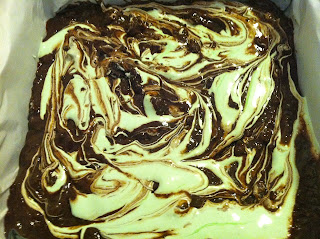 after the brownies are baked and cooled completely, you take some buttercream frosting (either homemade or the kind you get next to the cake mixes - i opted for the former), stir it into the rest of the marshmallow, and spread it on top. 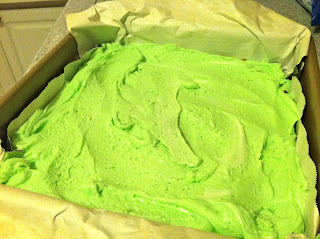 the final touch:  more crumbled minty oreos on top.  trying to smash those chocolate-covered cookies was kind of a pain in the ass, but it was fun licking my fingers when it was done. 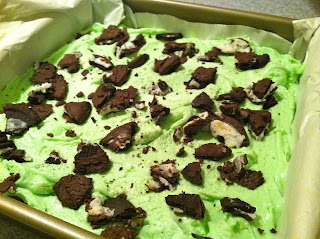 so, the verdict?  well, everyone loved them.  the teen thought the brownie needed to be a little thicker, and i probably overbaked it by a minute or two.  but it was nice and chewy, with just the right amount of mint flavor, plus a little crunch from the cookies.  really good. 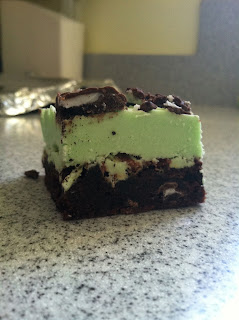 if you like chocolate mint even half as much as i do, i highly recommend trying this one out.  yeah, it's kind of a pain in the ass with the multiple steps and waiting to cool and all that jazz, but worth it.  way.
at August 28, 2012