although we live really close to the los angeles county fairgrounds, i have quite an appreciation for the annual fair down in orange county.  it's usually held during late summer, and it's a hell of a lot cooler down there than it is here at home.

so when i saw an ad for a fun 5K run at the OC fairgrounds that included a free ticket to the fair in the goody bag, i signed right up.  i'm in the throes of training for the disneyland half marathon, coming up in just a few weeks (yikes), so it made for a nice break from the weekend long runs.  i tried to rally some of my runner twirlies to join me, and managed to hook at least one.  of course, it had to be the one  i call speedy - she regularly runs 9:30 miles...with a stroller.  damn.

because there was no check-in/packet pick-up the day before, i figured it'd be a good idea to get there nice and early.  since the fairgrounds are a good 40 minutes away, for me this meant a wakeup call even before the asscrack of dawn - 5:15.  ouch.  but i managed, and got there right on time. 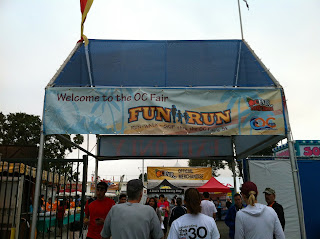 despite the early hour, there was already a shitload of people there. 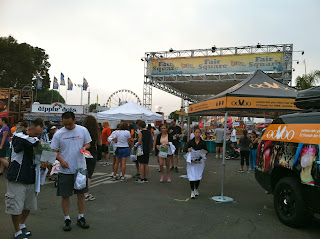 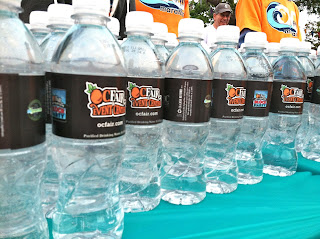 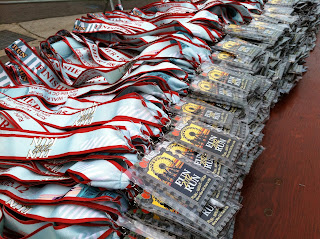 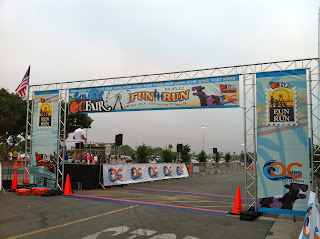 i got through the line fairly quickly, picked up my t-shirt, took a quick glance at the vendor booths, and headed back to the car to drop off my stuff. 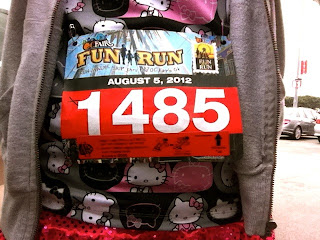 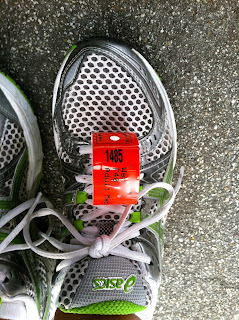 speedy texted me to let me know she was there too, and because i was easy to spot in my hello kitty shirt and pink sparkle skirt, we found each other pretty easily.  heh.

it was nice to chat with her for a bit as we waited for the race to start, and i didn't have the heart to tell her that i usually run solo.  besides, i thought it might make for a nice change to run with a buddy for once, although knowing her typical pace, i'll admit it - i was intimidated.  but she's such a sweetheart, and get this - even with her kick ass running skillz, this was her very first race.

we managed to find a spot not too far from the start line - behind the super serious runners, but still ahead of the walkers and stroller-pushers. 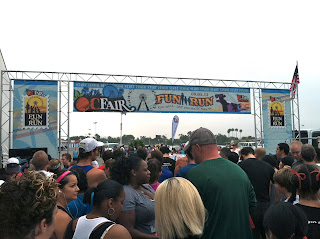 although the guy who sang the national anthem struggled a little with the very last note of the song, i still give him mad props.  no way in hell would i get up in front of a crowd of 1500+ to sing anything, let alone one of the hardest freaking tunes to belt out. 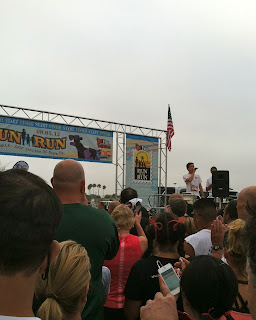 as the gun went off and we started running, i wondered how long it would take me to poop out and slow to a walk.  but like during other races, the adrenaline of being alongside fellow runners and knowing i was wearing a timing chip and a finish line in front of me carried me further than on my normal training runs.  so when speedy turned to me and said "we're doing about an 8 minute pace, are you okay?" i was pretty stoked to be able to smile and say "yup, i'm good!"  never mind that i was huffing and puffing.

i had my nike running app on to be able to record the run along with my other workouts, but this time it seemed to have failed me.  it was giving me prompts for mile markers a good chunk of time earlier than it should have, and i knew it had fucked up when it told me i was maintaining a 7-minute pace.  uh, yeah.  ain't no way that shit's ever happening to me.  and yet every time i heard it, it somehow kept me going - like i thought i needed to keep it up.  ha!  i'm pretty gullible, but you knew that already.

not long after we passed this, we hit the halfway point and i finally took a walk break. 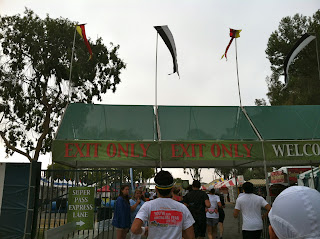 i waved at speedy as she kept on keepin' on, and then i arrived at the first "fun detour."  the race organizers had sent out an email that told us there would be several of these, fun stops that incorporated the county fair experience into the run.  i knew stopping at one or more of these would totally kill my time, but i couldn't pass up the chance for some fair fun. 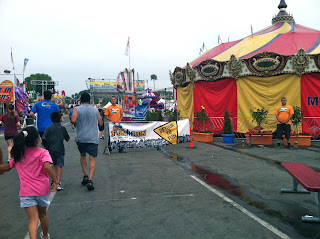 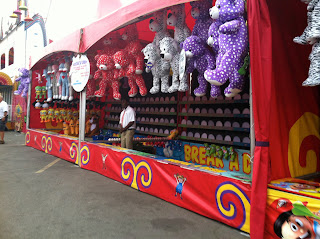 i stopped and chucked a couple of baseballs at the plates and actually managed to break one.  the dude grinned at me as he handed me my prize - a stuffed animal - and i thanked him as i scurried off to rejoin the race.  in my head, though, i was like "aw, shit.  now i've gotta carry this thing till i get to the finish line?"  bah.

is it bad that i really wished this was one of the fun detours? 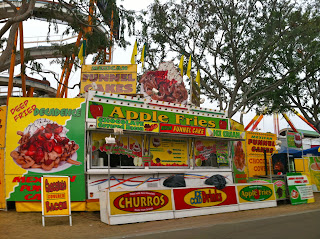 i damn near wept as i passed this.  now, i'm excited for the fundraising party the teen and i have coming up this saturday, but i've ALWAYS wanted to see duran duran live.  like, ever since i was about 12.  this would've been the perfect opportunity...but the show starts right as the party is ending.  i cry. 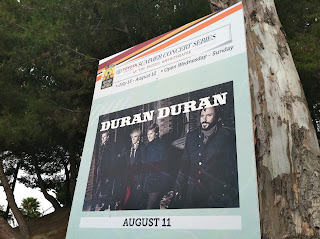 i'd passed up fun detour #2 (which turned out to be a trip down the super slide, dammit!), so when i reached the last one i decided to go for it.  it was inside the amphitheater, so i had to run down the stairs to get down to the stage.  i grabbed the guitar prop - yes, i know i totally held it wrong - and posed with my homies. 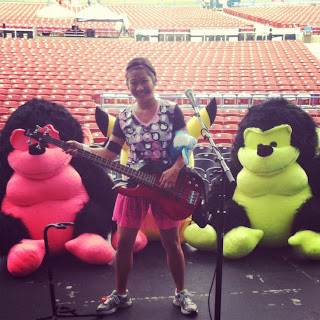 but as i put it back and got ready to run again, i realized that running down those stairs meant that i had to make up for it to get back to the course.  son of a... 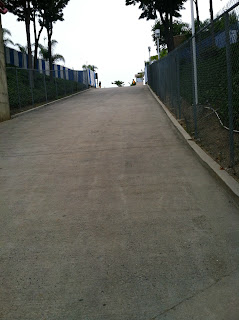 because i'd already lost so much time, i sprinted my ass up that damn hill.  it was steep as all hell, and my legs were crying for mercy when i reached the top, but i was pretty proud of myself for not walking up.  and not long after that, i reached this: 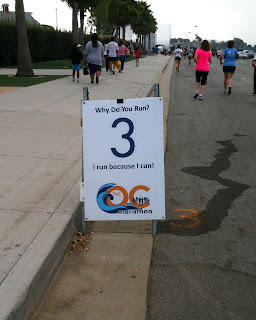 with my app still in my ear telling me i was at a 7:30/mile pace (HAHAHAHAHA, so laughable), i jogged my happy ass all the way through the final stretch and finally crossed that finish line. 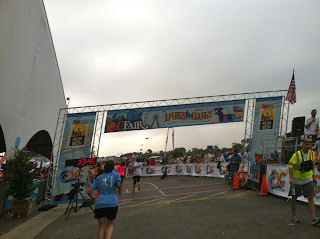 i found speedy waiting for me just beyond the medal handouts, and we hit up a lady standing nearby to take this. 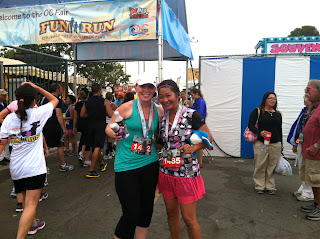 of course, i had to have this too: 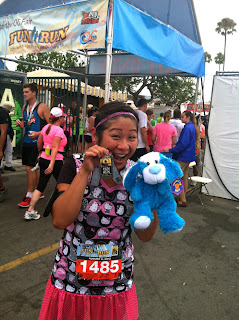 after a quick stop at starbucks for some sustenance, i headed home to get cleaned up and spend the rest of my sunday with the bean and the hub.  i snuck up behind her to present her with the new toy (who i'd managed to sweat on, but he was all dry by the time i got home), and she was super duper stoked and promptly named him "bluespot." 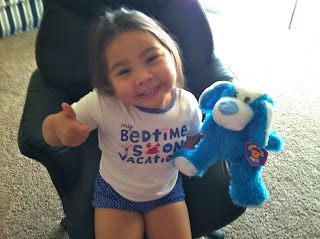 Email ThisBlogThis!Share to TwitterShare to FacebookShare to Pinterest
Labels: oc runners, running my ass off