the teen and i were lamenting a couple of weeks ago over the fact that we'd had zero jonas this summer.  we've done some sort of JB outing every year since at least 2009 - is that crazy, or what?  and so we were stoked when an email came through with a chance to score tickets in the audience for a new show on the CW network called "the next."  we'd heard that joe, the middle jonas, had been cast as one of the four mentors on the show (the others were gloria estefan, nelly, and john rich of country's big & rich).

plus, the timing couldn't be better - the taping was scheduled for the evening of the teen's first day of school.  this is, of course, the teen's senior year of high school.  so it was a fun way to say goodbye to summer and get our jonas fix after all.

she even let me take a picture of her on the morning of the first day.  i haven't been able to take one of these in a while, since she's been at her dad's for this day over the last few years. 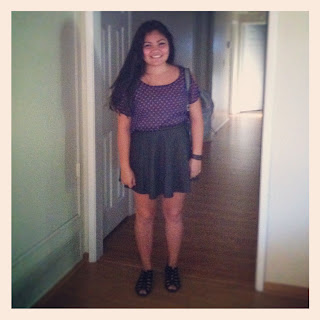 while we hadn't won the jonas fan club's contest for tickets and a meet & greet with joe, a different email told us that we'd been selected to join in the audience anyway.  knowing it was going to be a serious clustereff, as with all things jonas brothers usually are, we left super early and got to the orpheum theater before the call time. 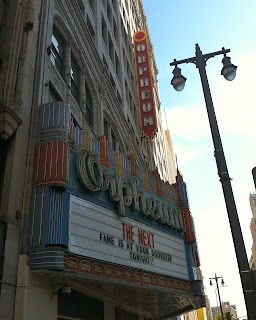 but...so much for being "selected."  because as we headed towards the lineup we'd seen outside the theater, the casting staff directed us to a different line that started down the street and around the corner. actually, around several corners.  we ended up literally behind the theater, right in front of the gated parking lot where the celebrities' tour buses were waiting. 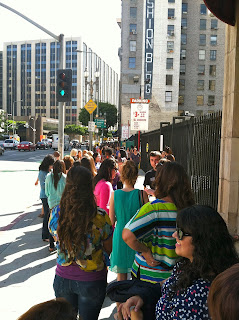 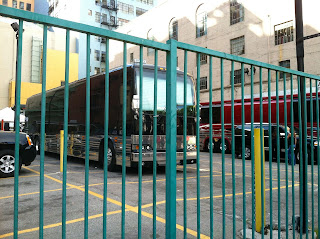 i was a little surprised to receive an actual paper ticket for the show.  i was actually assuming that "general admission" meant we'd be standing down on the floor, elbowing for a spot.  we were both pretty relieved to realize that there were seats instead. 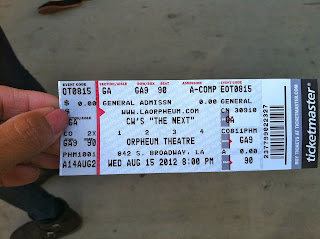 now, i mentioned we were there early.  like, stupid early.  we'd arrived around 4:15, and do you see the showtime listed on that ticket?  yup.  we were standing around for a long ass time.  i stood under this sign for a while and peeked into the building, imagining what it might have looked like back in the day. 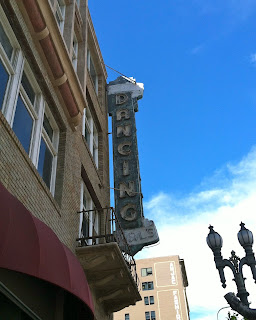 the teen was slightly less enthralled.  can you tell? 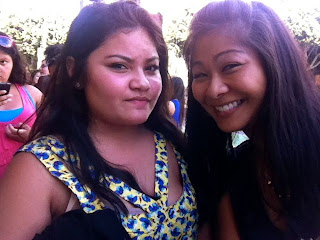 somewhere into hour two, the ubiquitous black suburbans with blacked-out windows began to arrive.  one of them parked right next to this bus, and the occupants began to exit through the doors on the other side.  you know, so we lowly audience members standing in line couldn't see too well.  but we were standing next to some folks who'd gone to the grove earlier that day for a taping of "extra," where joe and nelly had made an appearance.  as we all watched the cars intently, they told us excitedly that one of the people who got out of the truck was in fact mr. "hot in herre" himself. 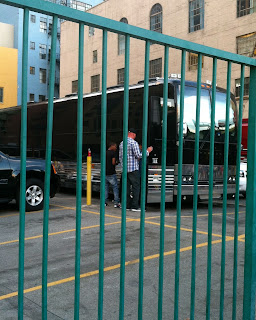 this is going to sound absolutely ridiculous to you, and i gotta admit, it just sounds like sheer fuckery to me as i type it.  but it's part of the story, so here goes:  we waited in that line for almost four hours.  the teen and i were desperately craving a starbucks and had heard that there was one not two blocks away. but i was concerned that if one of us got out of line to make the trek, that would be the exact moment that the line would begin to move and we'd totally get assed out.  after waiting for so long, i just wasn't willing to take the chance.  so we stayed put.

then about three hours in another suburban pulled up, and the squealing went up from the girls who were standing in the line in front of the driveway.  obviously, joe had finally shown up.  and while i wasn't quick enough to catch him, he did wave enthusiastically at the crowd when he got out of the car.  he's somewhere behind those cars waaaay back there.  really, he is. 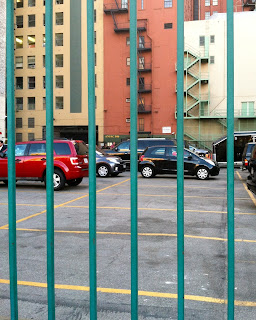 there was lots of cheering when the line finally began to move.  after standing in the same spot for so long, my feet were aching.  and the teen was so fed up, i thought she was gonna explode.  somehow i think this might have finally ended her interest in crap like this.  it was quite a relief when we finally found ourselves standing in front of the theater. 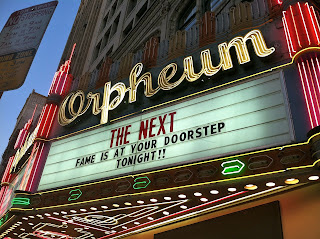 i actually really love going to venues like this.  they're all historical and stuff, and rather ornate in their decor.  i like to imagine theatergoers from back in the day attending shows all decked out in their finest, pulling up in their old-timey cars, watching performers like judy garland on stage. 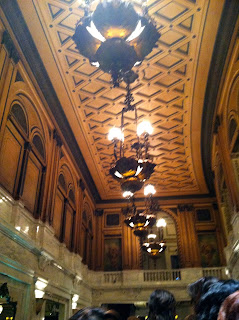 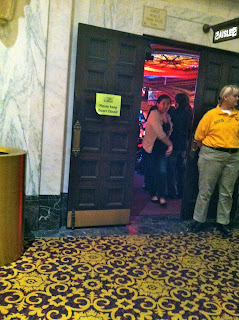 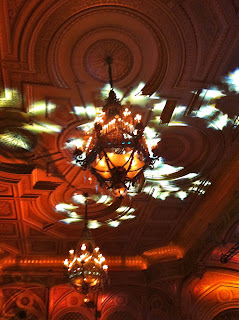 because it was so late, we were seated up on the balcony with pretty much zero chance of being seen on air.  oh, well.  we were just grateful to finally plunk our asses into comfy chairs and relax for a bit.  after a few announcements from the stage manager and the executive producer of the show, the celebrity mentors came out.  there's joe, welcomed with a crapload of ear-piercing screaming and hollering from the audience.  and because it happened to be his birthday, everyone sang to him as he smiled and waved at everyone from his place on the stage. 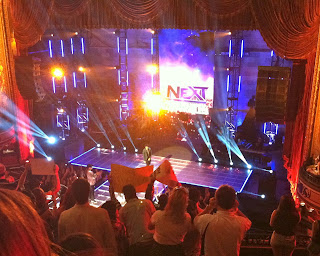 the premise of the show is that the mentors go to a handful of cities (orlando and new york, to name a couple), surprise a lucky up-and-coming local performer, and spend 72 hours with them to help them get to the next level (hence the name of the show).  then they take their newly learned skillz up on stage in front of a live audience and sing for a chance to win a recording contract from atlantic records. 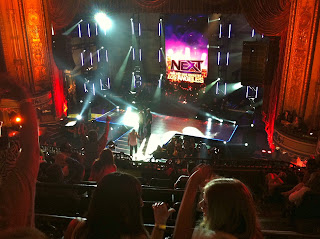 we weren't allowed to have our phones out while the show was being taped, so i don't have a ton of pictures.  no big deal though.  because we were so far away from the stage, the few shots i did sneak are totally the suck anyway.

the four singers strutted their stuff and sang their hearts out while their friends and family cheered them on wildly.  we got to see footage of them being "ambushed" by their mentors and watch them rehearse before stepping out onstage, and then receive feedback from all four celebrities after their performances.    one was a singer at a coffeehouse, another was an ex-boyband member (from take five), and the other two had some pretty significant followings on youtube.  they were all really talented, and then the audience was to vote for the one who would move onto the semifinals. 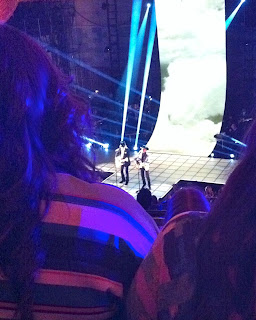 while the announcer said that we'd be texting in our votes, the actual act was done in a much less high-tech way.  turns out those tickets we'd been given had another purpose - we were handed pens and instructed to choose our favorite singer by circling their number and then tossing the tickets into boxes. 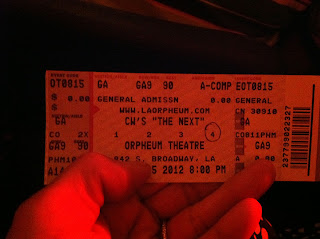 and then the taping just got weird.  because they were obviously not gonna count out those votes right then and there, we weren't going to find out who the winner was before we left.  besides, as the executive producer told us, if they revealed the results that night, it'd be all over social media and then nobody would watch anyway.  heh.  so what they did was four separate clips of each contestant being crowned the winner of the show.  the teen and i just thought this was bizarre - they had to totally pretend like they'd just won, one right after the other.  it looked so fake, and now we know how they handle pretaped contestant-type shows like this.  i always just thought they swore the audience to silence, made them sign a waiver, something.  but no - they just force those poor contestants to pretend like they won and hope they're passable actors. 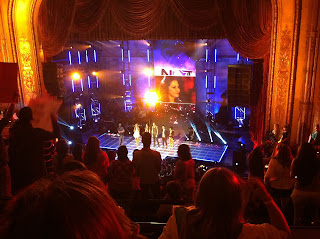 and then they made poor joe turn to the audience and read some lame feedback comments into the camera.  "hey man, you really performed that well" and "wow, you really blew me away" was on the teleprompter, and he was visibly uncomfortable on-camera as he tried to look and sound sincere. 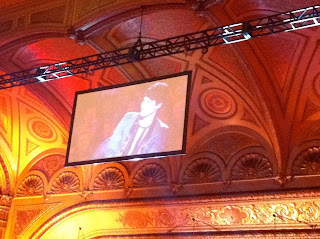 with our hands red from constant clapping and our throats hoarse from the hooting and hollering, it was over.  the mentors waved at us and exited stage left. 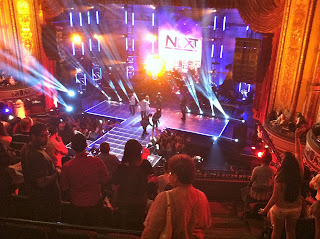 the show premieres tonight on the CW network.  although it'll kick off in another city, with our show probably not on for a month, we'll be watching.  duh - we're all invested in it and stuff.  but i wonder how it'll do, with "the voice" coming back soon.  i guess we'll just have to wait and see.
at August 16, 2012