after that first successful fishing day in bishop, we moved on to the next stop - truckee.  i'd never been there before, but the ILs had contemplated moving here, even putting in an offer on a house or two.  our hotel was just a few minutes beyond the super cute-looking downtown area. 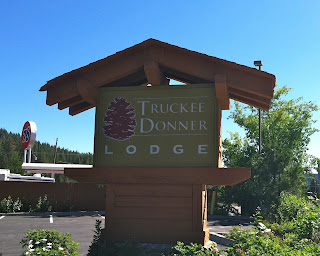 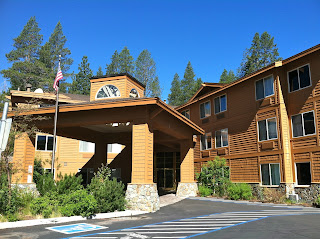 after checking in and getting settled, we headed back to town to check it out.  we were too late in the day to catch most of the stores, but it was nice to stretch our legs and stroll down the street. 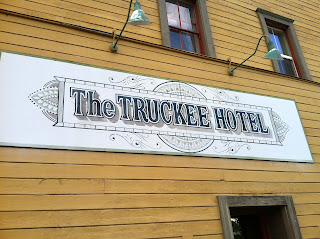 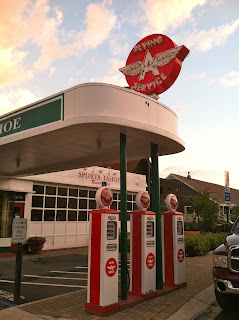 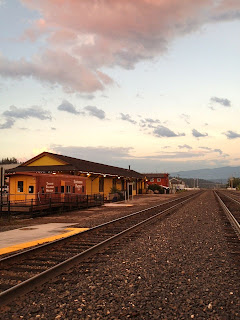 quite a historic little town, truckee is.  back in the 1800s, folks who wanted to get to california from the east had to get through donner pass, a few miles away.  and that area is named after a crew of emigrants who got stuck here during a particularly rough winter.  a bunch of them, uh...ended up resorting to cannibalism to survive.  blergh.

the next morning, we repeated the routine - guys left early, we lingered and then met up with them when we were damn well good and ready to.  this time, there were no boats - it was a day for fly fishing.  after grilling the hub ad nauseum the night before about the differences between this and what we'd done on the boat, i decided that fly fishing was best left to those who had the $$$ wader pants.  i was curious about what was so addictive about this, but after sitting in a chair on the shore watching them fling their baited lines back and forth, i was bored stiff and stretched out in the bed of the pickup. 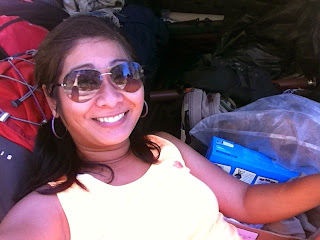 the bean, on the other hand, was having a great time.  she was flinging rocks into the fast-moving river as fast as she could, which was probably scaring the shit outta what few fish might've been in there.  and as a result, i don't think anybody caught a damn thing.  but they didn't really care, since she was so happy and excited to be there.  and i gotta say, it was beautiful up there - clean and cool, with crystal clear water. 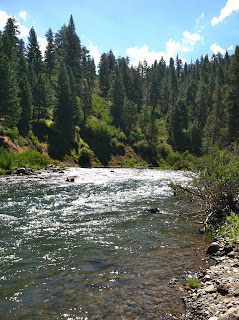 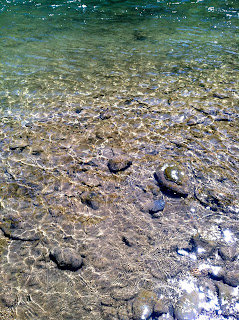 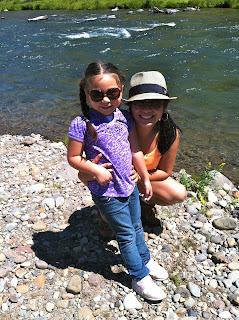 MIL, who as it turns out isn't a huge fan of fly fishing either, spent a good chunk of time playing with the bean.  they rolled their pants up and shucked off their shoes and waded through the river hand in hand.  and what was i doing while all this was going on?  well, i was still curled up in the truck enjoying the breeze and, uh...catching up on "general hospital" via the free ABC player app on my trusty iPhone.  it was mighty relaxing.  shut up.

after a while, the bean and her grandma tired of their riverside escapades and we decided it was time to split up.  the guys were still raring to go with their fishing poles, and so while the bean conked out in her seat, MIL dropped me off in town to shop while she drove around for some exploring of her own.

alas, the shops that had enticed me so from the outside fell a bit short of my expectations.  still, i had a great time wandering in and out of them.  and although i was armed with a wad of cash the hub had stuck in my pocket, all i ended up with was this, from the surprisingly well-stocked kitchen store: 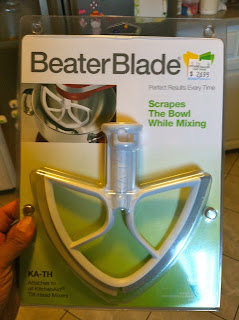 yes, it's an attachment for my mixer that'll come in handy when i need to make umpteen batches of sugar cookie dough and other deliciousness.  it's a paddle with a rubber spatula-like scraper that'll save me SO much time in the coming weeks.  i'd been eyeing this thing on amazon for awhile, and since it was right in front of me (and the very last one in the size i needed), i went for it.  oh, and i also stopped in the sweet shop for a treat. 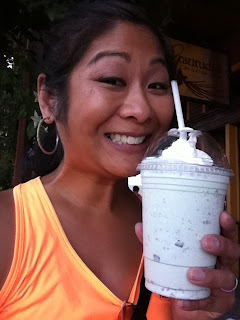 later that evening, the bean managed to talk me and her daddy into taking her to the pool.  well, i might've let him handle her in the chilly ass pool while i scurried over to the hot tub to soak my tired muscles.  muahahahahahaha.  but swimming didn't last too long, and not even because the water made the hub's teeth chatter.  it came to an abrupt halt when the bean looked over at one point and spied this next to her: 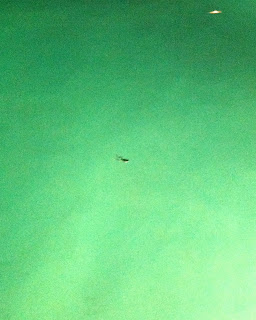 that little speck in the water, my friends, is a frog.  a very fast-moving frog, and when she realized it was coming within inches of her the bean let out the loudest, longest, most petrified scream i've ever heard come out of her mouth.  i was torn between falling all over myself with laughter and sympathy for her moment of fright.  but her daddy was right there to pull her out of there and wrap a sandpapery towel around her, and that was that.

Email ThisBlogThis!Share to TwitterShare to FacebookShare to Pinterest
Labels: frogs are scary, no fishing for me