we ran the grove

with our avon walk coming up in a matter of weeks, the teen and i need to get some training walks done.  and when i saw this tweet from the grove in l.a., i decided this would be a fun way to get one in. and because i'm such a sucker for a free tee and goody bag, we made sure to get there nice and early.  plus, we faced zero traffic and found a parking spot with no problems. 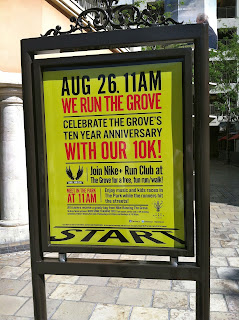 there was a tent set up on the lawn, so we headed over to check it out. 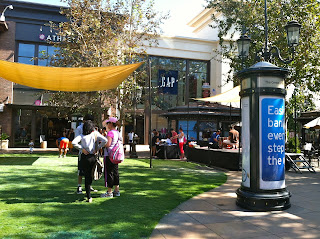 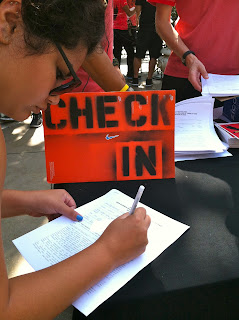 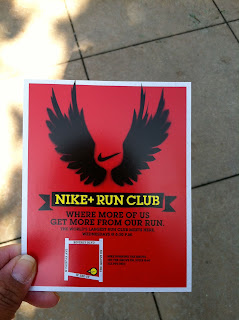 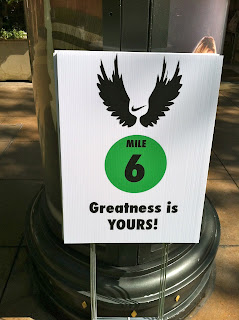 goodies were available for the first 75 attendees, so we made sure to put our names down on the sign-in page.  and then there was nothing to do but stretch...and wait. 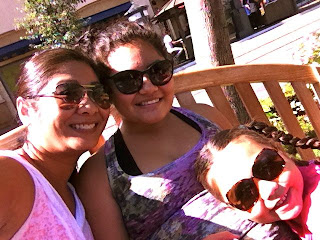 signage for the pacers.  i figured this was the only time i'd ever see this. 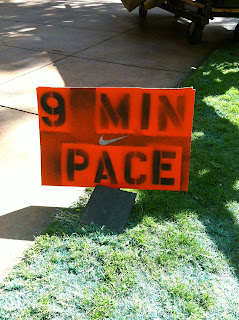 as we sat in the shade and watched people stream in by the dozens, a running club gathered behind us to warm up.  it was funny to listen to their leader direct them to drop into this pose and say "let's do this one a few times, because we always get our picture taken and maybe we'll end up in a magazine!"  it was funny to see that guys can be total attention whores too. 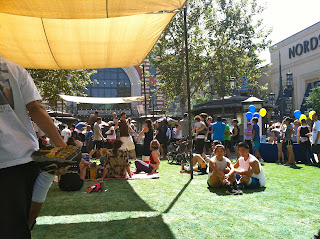 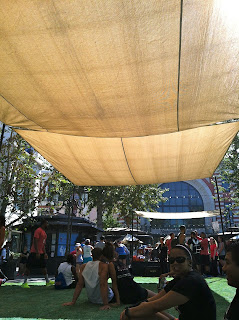 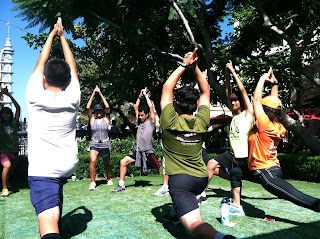 you can see how crowded it got by the time the run was supposed to start.  and it was HOT.  like, i don't typically go out for a run when it gets over 75.  and so when we heard that there was also a 5K option - well, we took it. 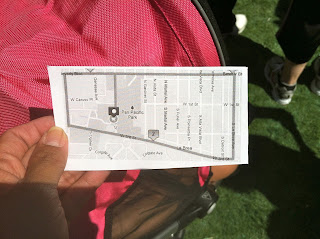 there was a band onstage, and the lead singer managed to insert all sorts of funny references to running, nike, and the grove into the songs.  and then a dude from the nike running club hopped onstage to thank everyone for coming, offer some encouragement and reminders to stay hydrated and put on sunscreen, and then began calling out groups by pace to get started. 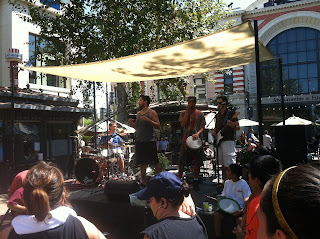 our 5K group was pretty small, and we were the only ones with a stroller.  no biggie.  and the bean, after a few minutes of sitting there and watching the scenery, got bored.  but i'd come prepared for that. i know my kids pretty well. 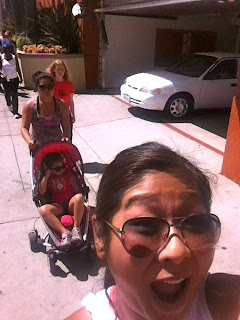 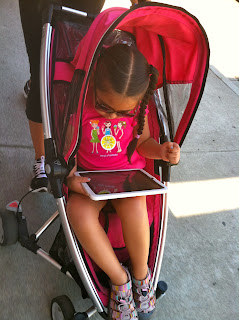 remember the old navy pop-up shop (how could you forget!)?  it was on our route, and with another 45 minutes until it opened there was quite a long line out there.  they'd added "free jeans for all" signage to the building's exterior, and who doesn't love a freebie? 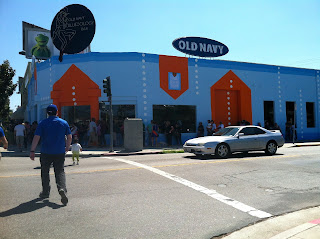 also on the route was one of our favorite spots.  mmm, nutella milkshake. 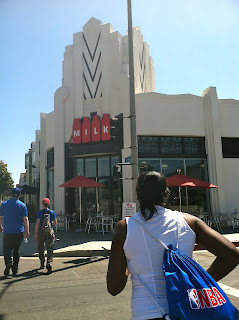 we actually managed to make it to the front of the pack, thanks to spurts of random jogging.  to be honest, as we walked along - even at a brisk pace - i was absolutely itching to break into a run.  who'da thunk it?  but i let the teen take the lead, and we ran whenever she felt like it.  she was pushing the bean, so she had a bit of added resistance.  all in all, we probably did the 3 miles in about 45 minutes.

fun freebies awaited us when we returned triumphantly to the grove. 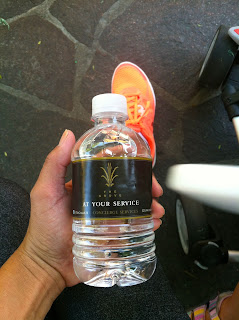 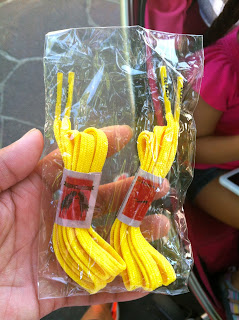 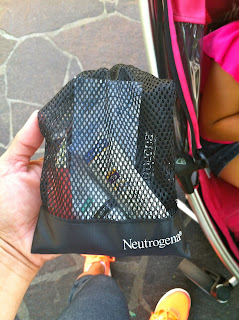 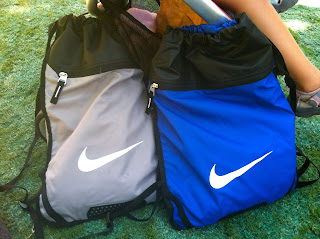 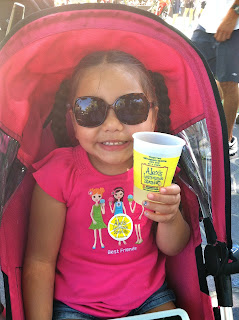 the bean was excited to get out of the stroller and stretch her legs a bit.  plus, she got a little waterplay in too. 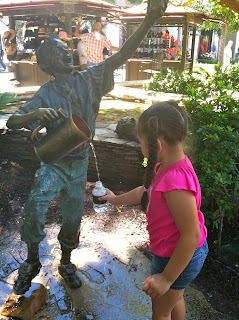 we were starving by then, so we headed over to the farmer's market and got some grub.  the bean knows that this is the place where she gets to eat delicious corned beef.  "i can cut it all by myself, mommy," she said. 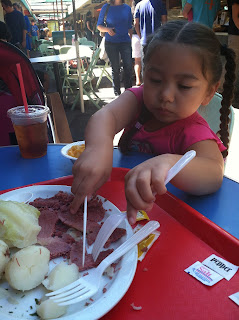 and what's a good meal without a treat at the end? 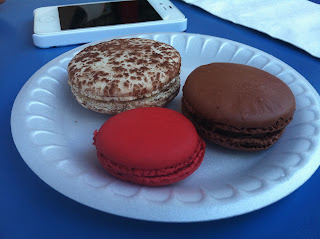 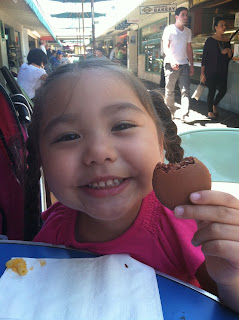 on the way back to the parking structure, we stopped at the grove's newest addition. 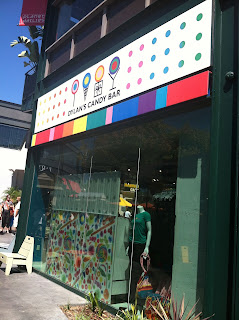 amazingly enough, we managed to get out of there without spending a dime.  sweet.

oh!  here's what was in those goody bags.  while the t-shirt is pretty cool, and extra shoelaces are never a bad thing, the teen and i were pretty satisfied with the actual bag itself.  it's pretty darn nice, especially for a freebie. 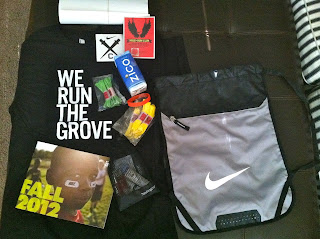 i wish we were closer to the grove.  the nike running club meets twice a week, and the route is pretty nice.  maybe when it gets cooler, i'll make my way out there again.
at August 30, 2012

Email ThisBlogThis!Share to TwitterShare to FacebookShare to Pinterest
Labels: freebie fun, running my ass off