we've managed to make the l.a. times festival of books a yearly tradition by now.  it's always a fun outing, with lots to see and do.  i actually hadn't planned on attending this year because we originally had planned to hit up the renaissance faire with the girl scouts, but with a lack of interest we ended up canceling the outing altogether.  this was fine by me, because i didn't really want to miss the festival anyway.

it took just one text to my friend lilcee and just like that, we were there.  as it's been for the last few years, it was at her old stomping grounds - the campus of usc. 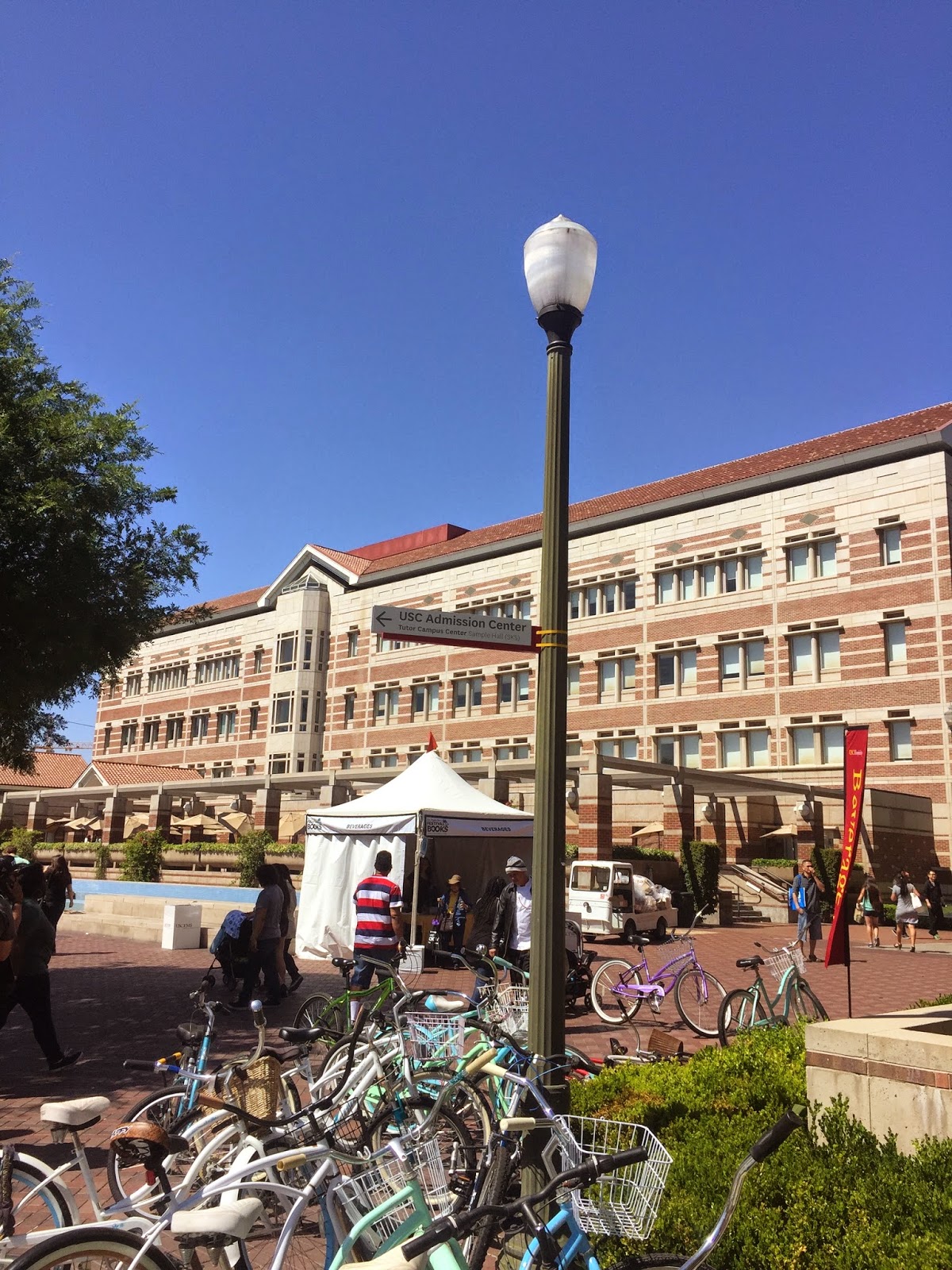 as luck would have it, the entrance we used dumped us right into the children's area.  the first booth we visited was - of course - sponsored by disney. 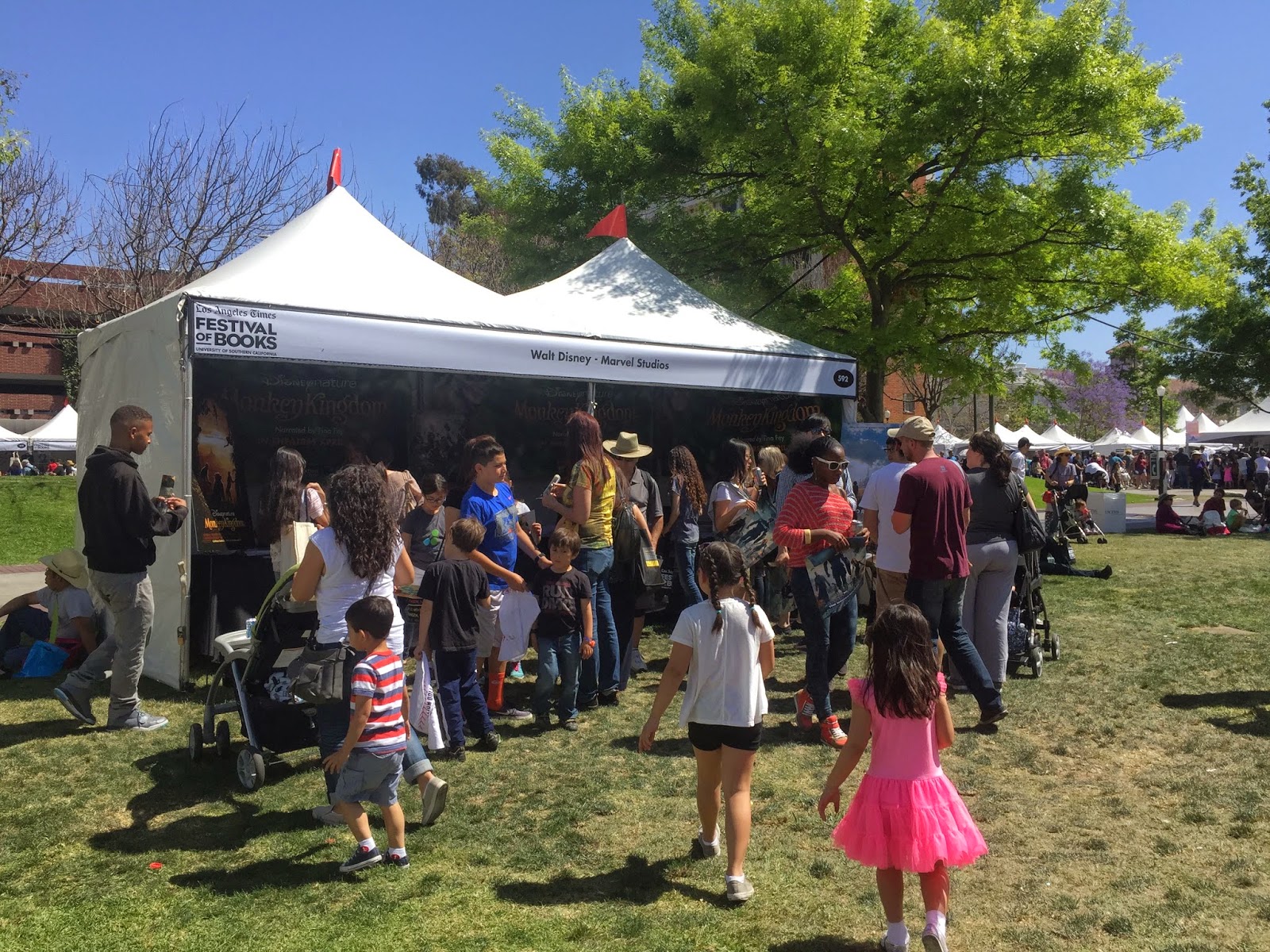 here we collected a captain america poster that i don't know what we'll do with, and something that proved to be quite valuable as the afternoon went on - a round baseball-shaped towel advertising last year's "million dollar arm."  because you know me - put me out in the sun and i'm sweaty betty.  it was perfect.

a booth for mrs. nelson's book fair was next. 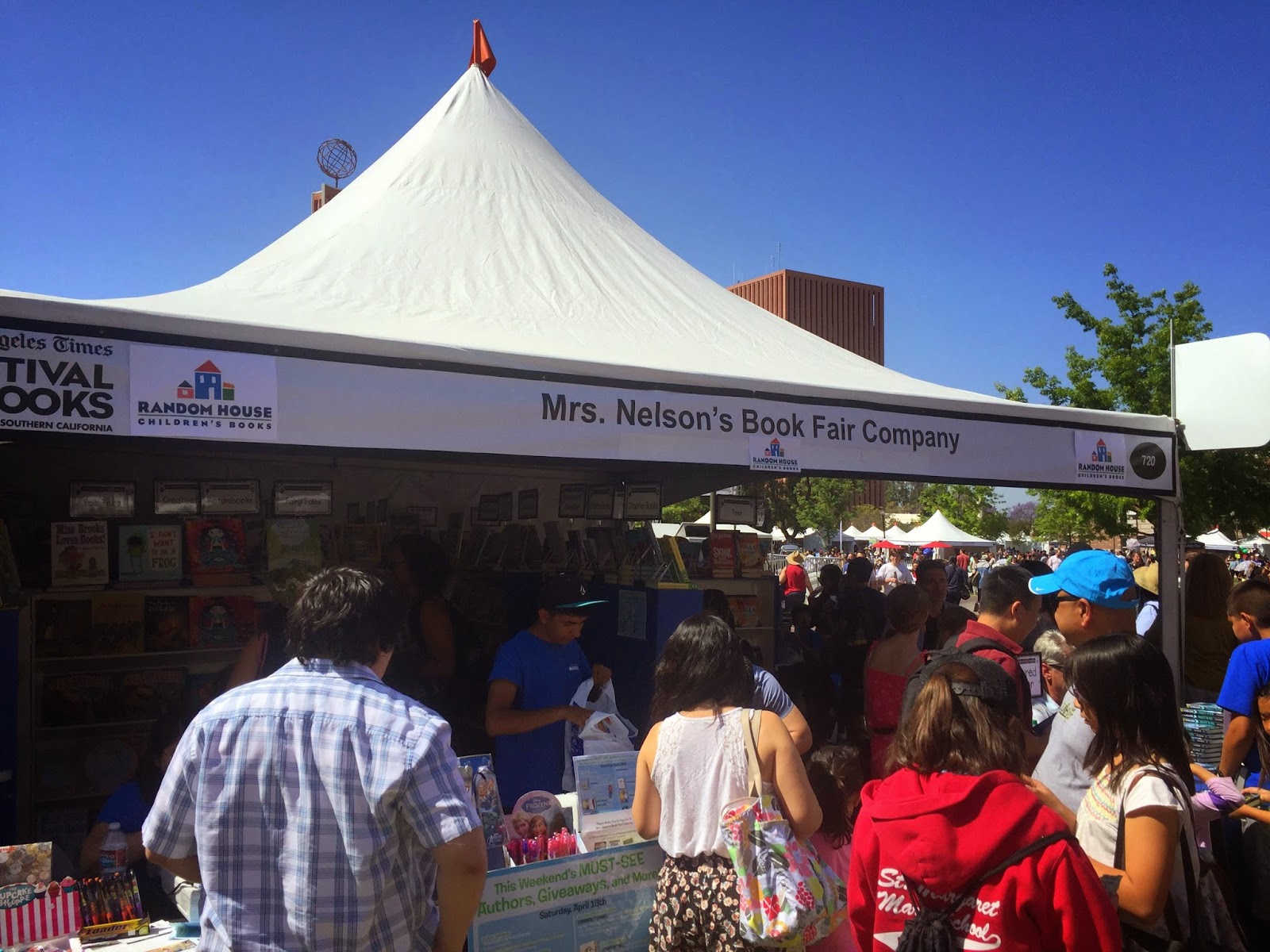 i always think of my friend jessica whenever this guy is mentioned.  i wonder if she knew he was going to be making an appearance here. 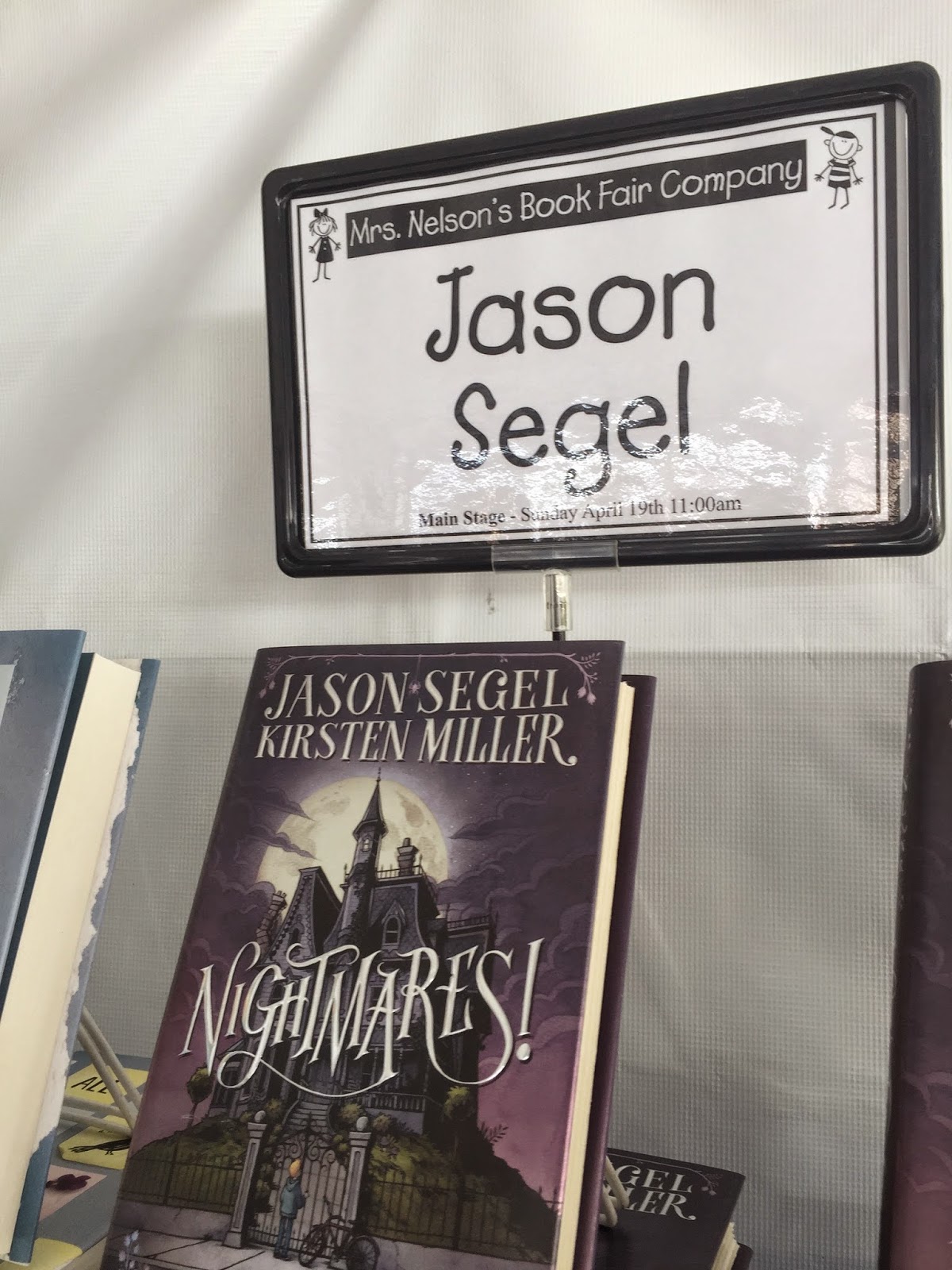 i considered picking this book up for the bean - kind of like a starter version of the diary of anne frank.  i didn't, but only because i wasn't ready to start carrying too much stuff around just yet. 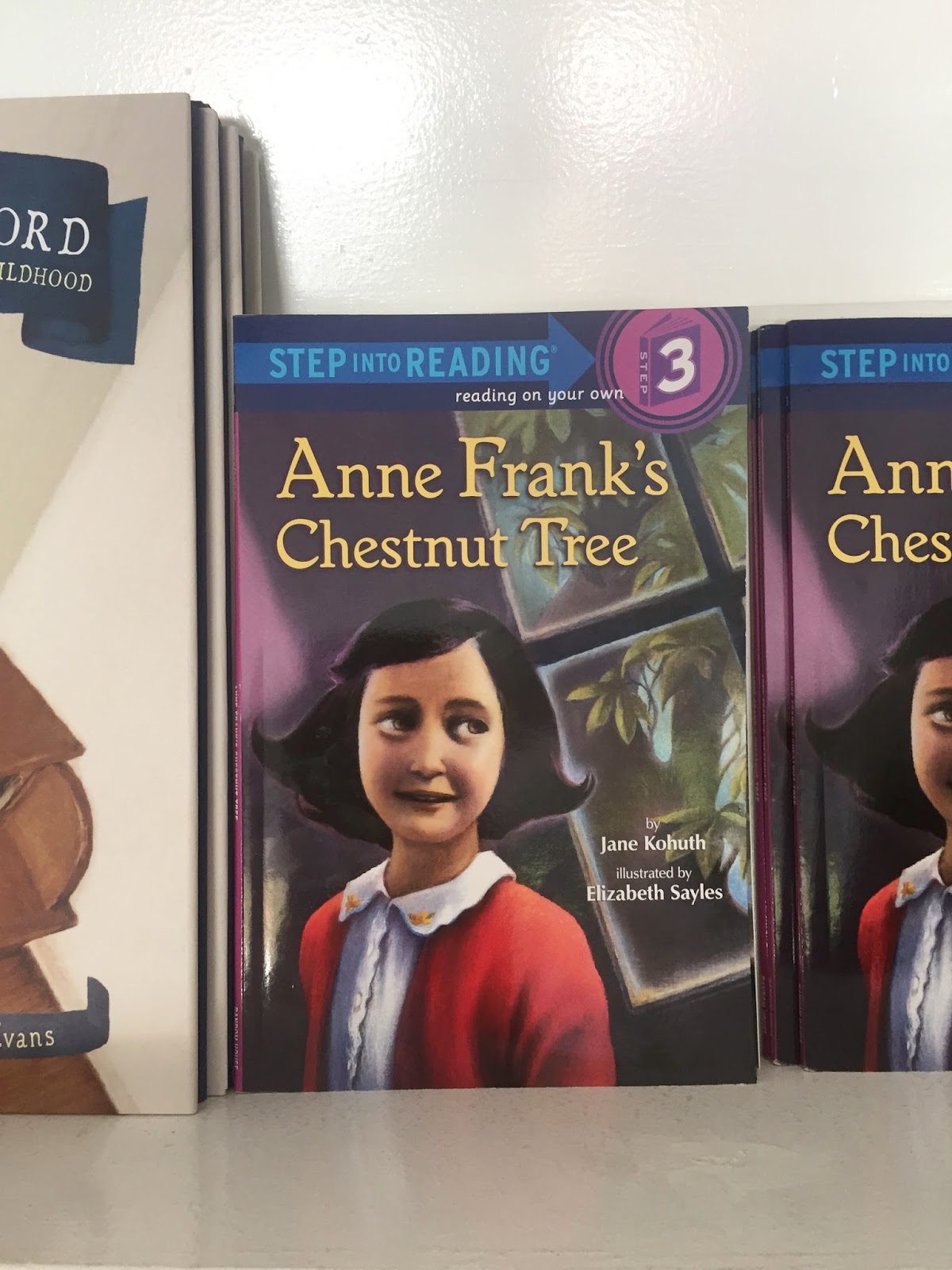 besides, she was distracted by the sight of the ice cream carts that we kept coming up on. 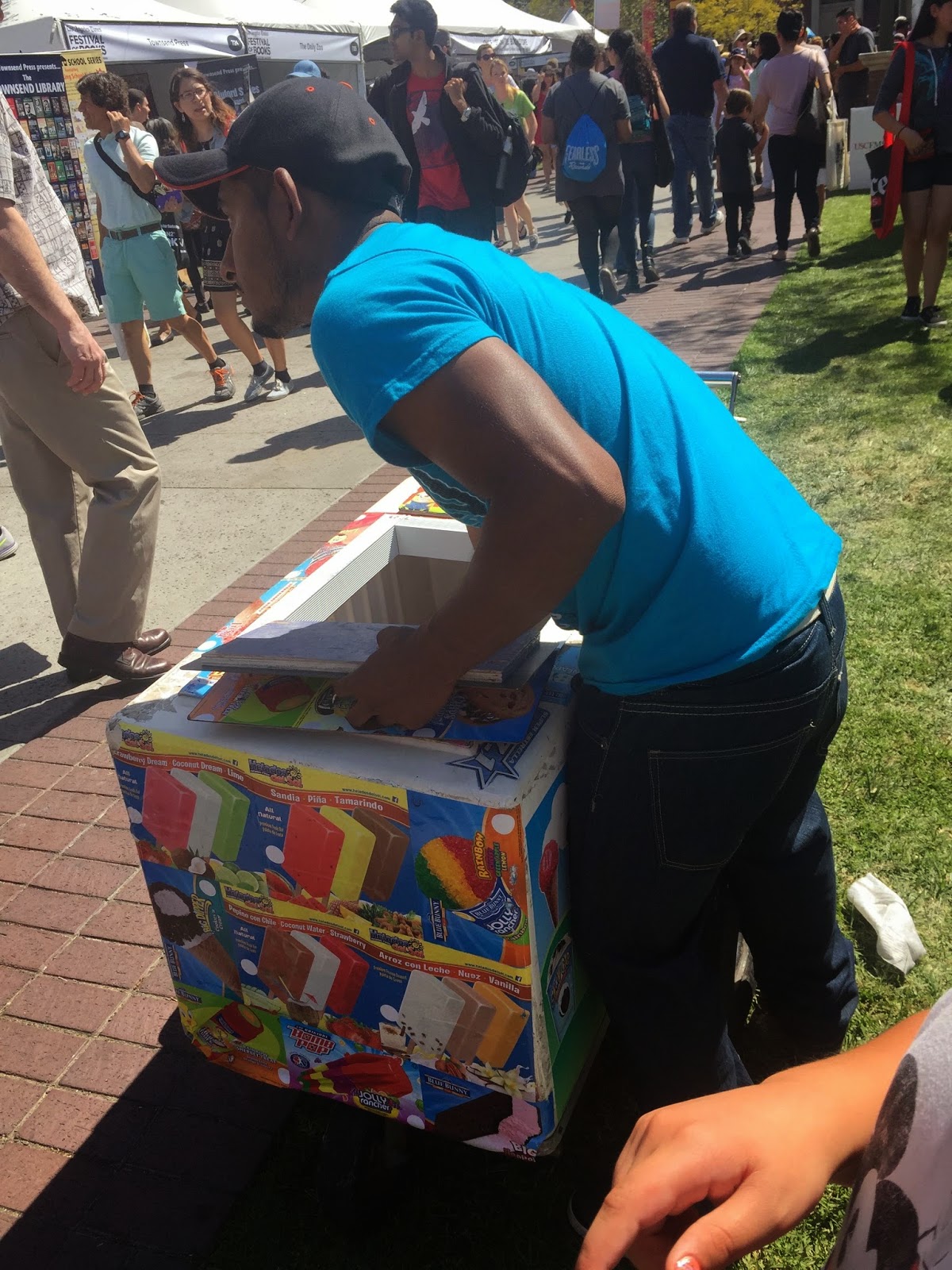 at this booth, she and mini cee got to spin a wheel, complete the activity that they landed on, and earn a prize. 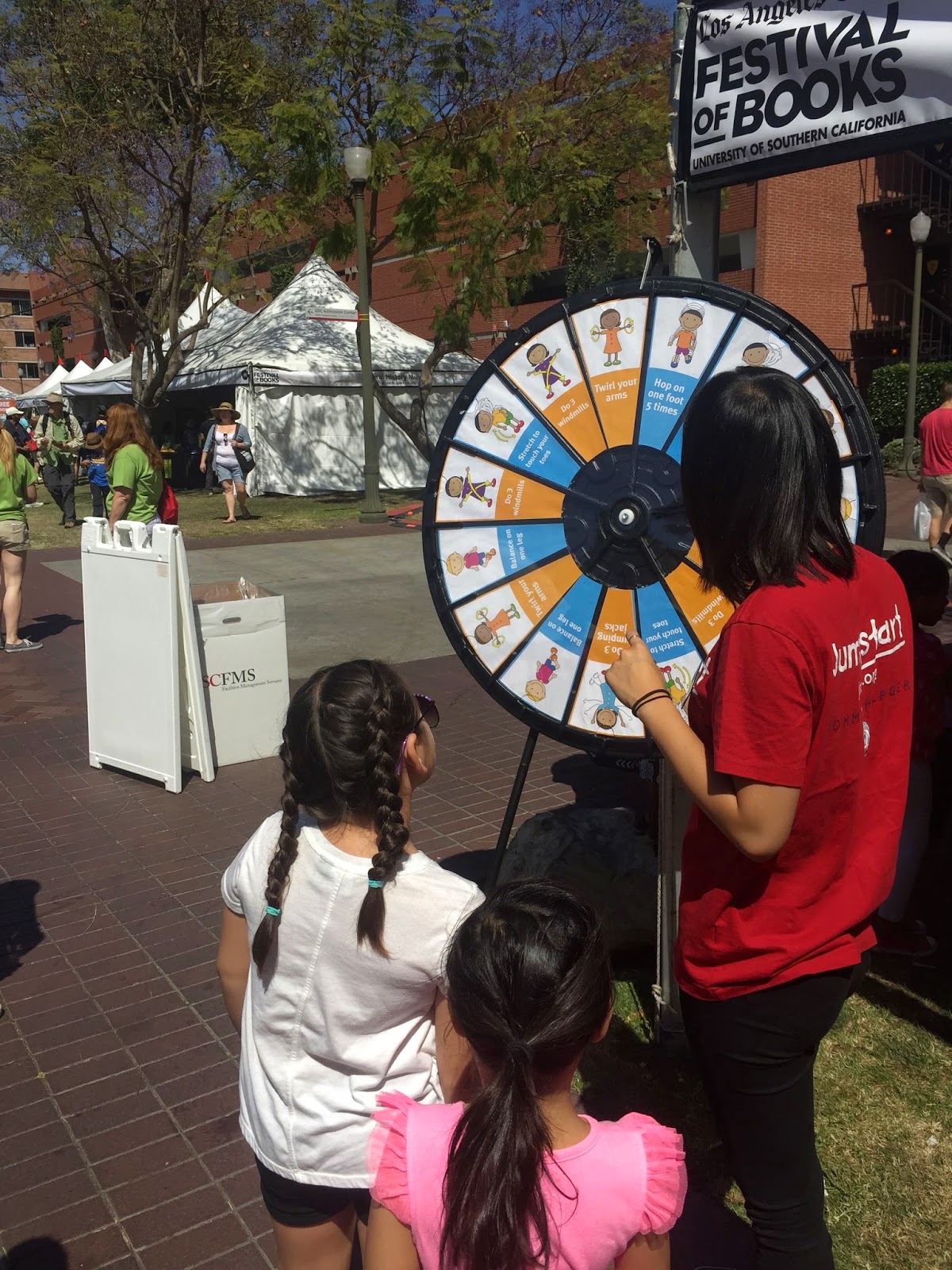 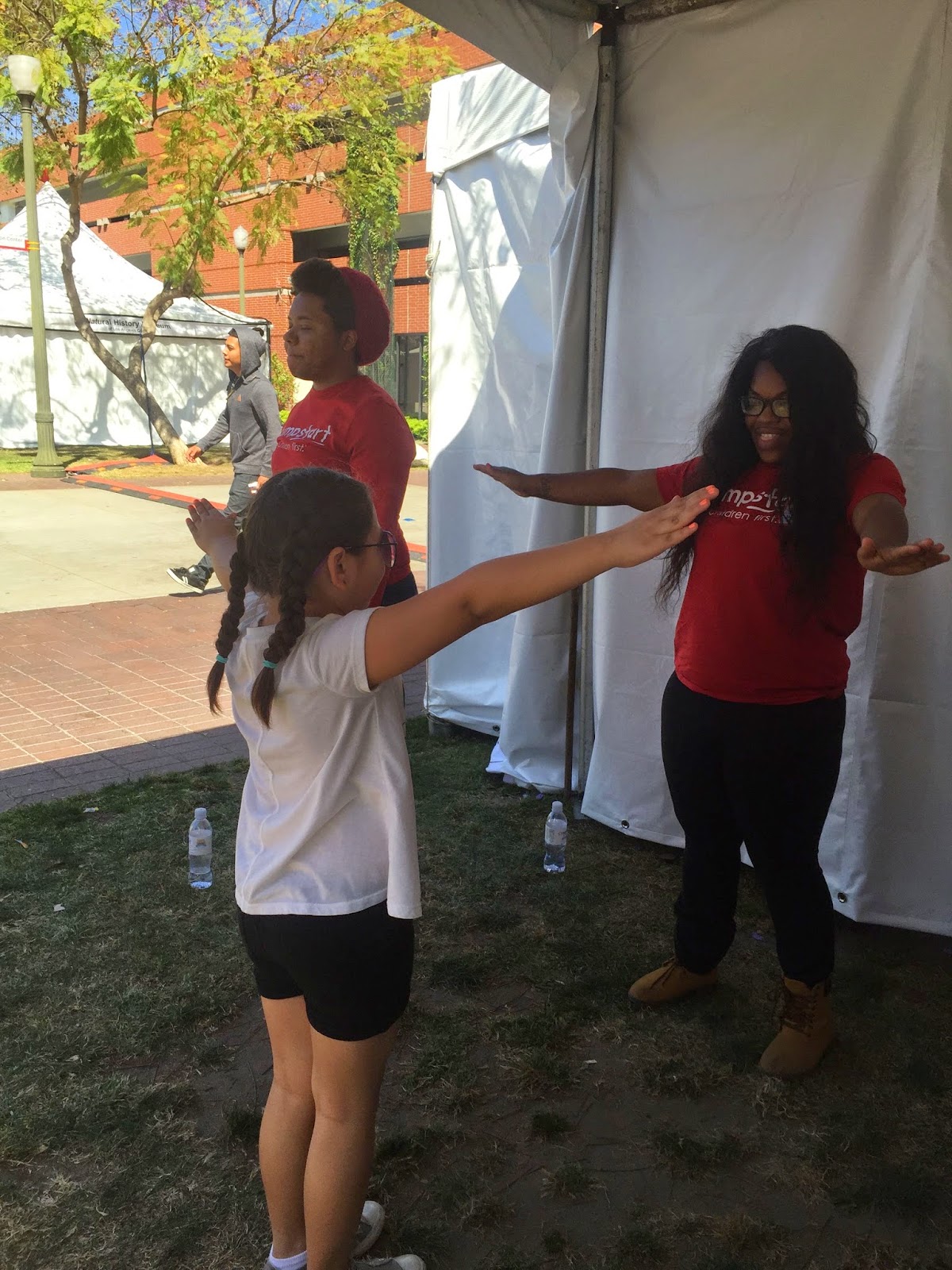 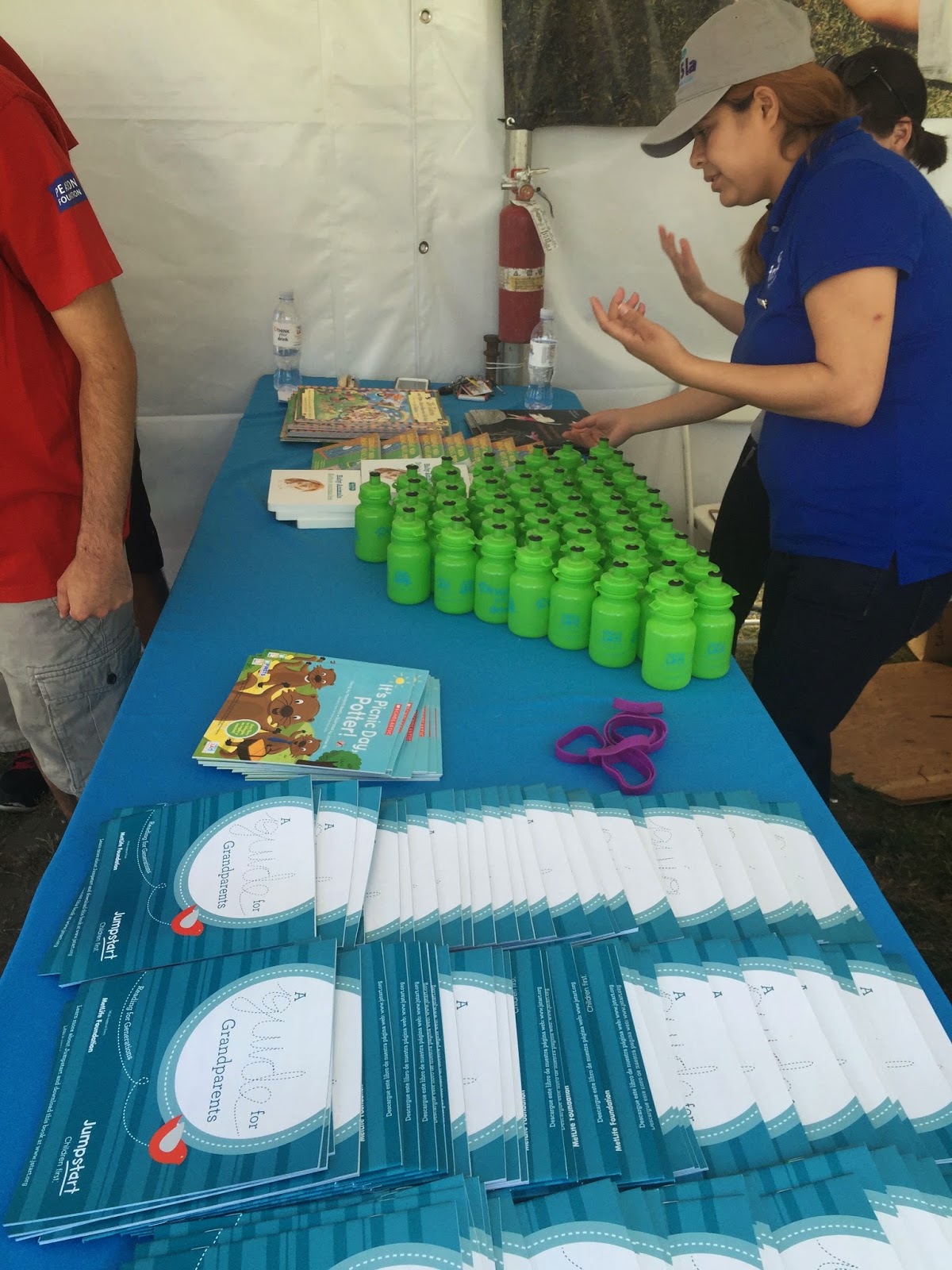 a booth sponsored by mcdonald's offered up some cool treats - sample cups of their mango pineapple and strawberry banana smoothies. 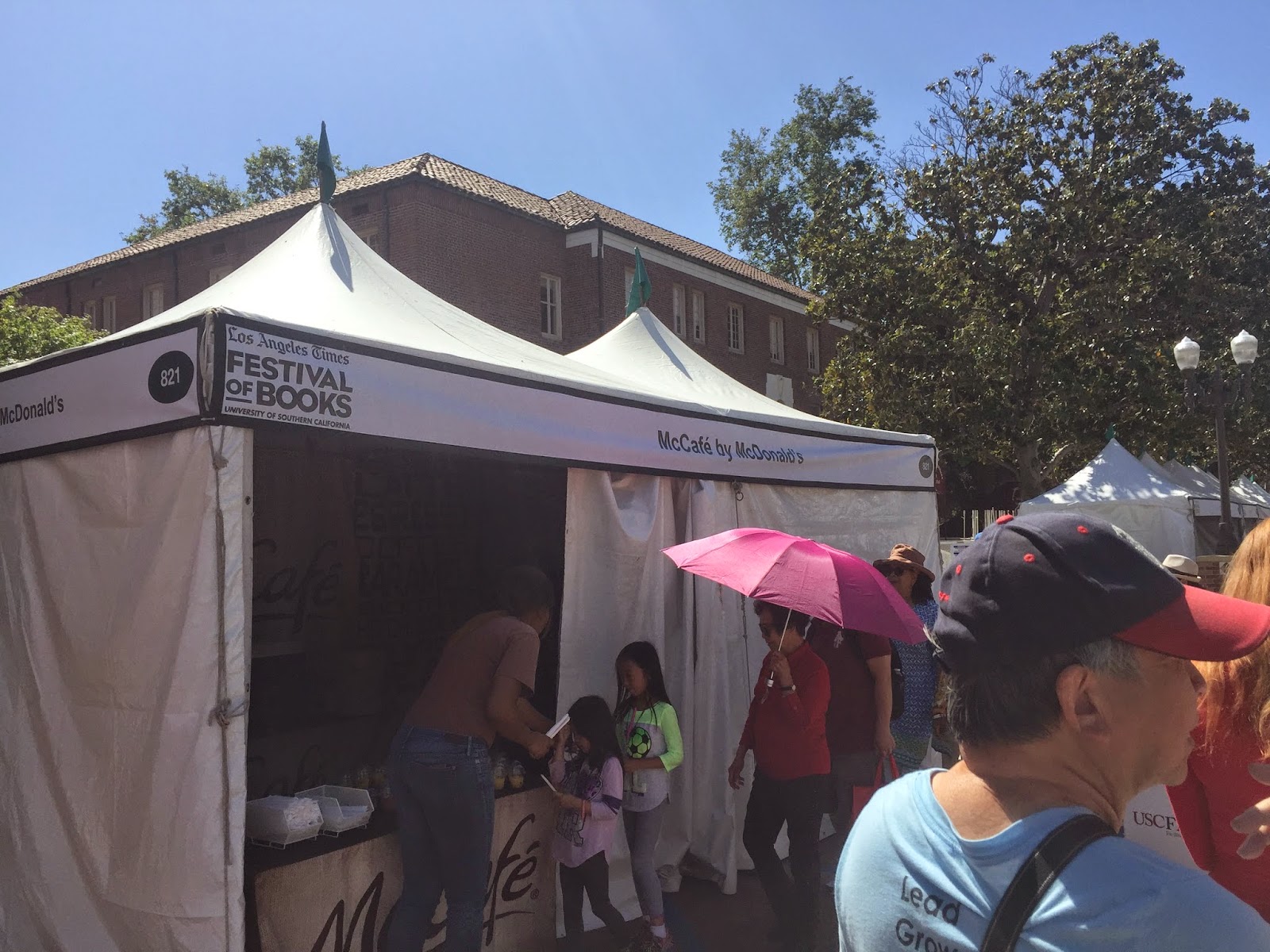 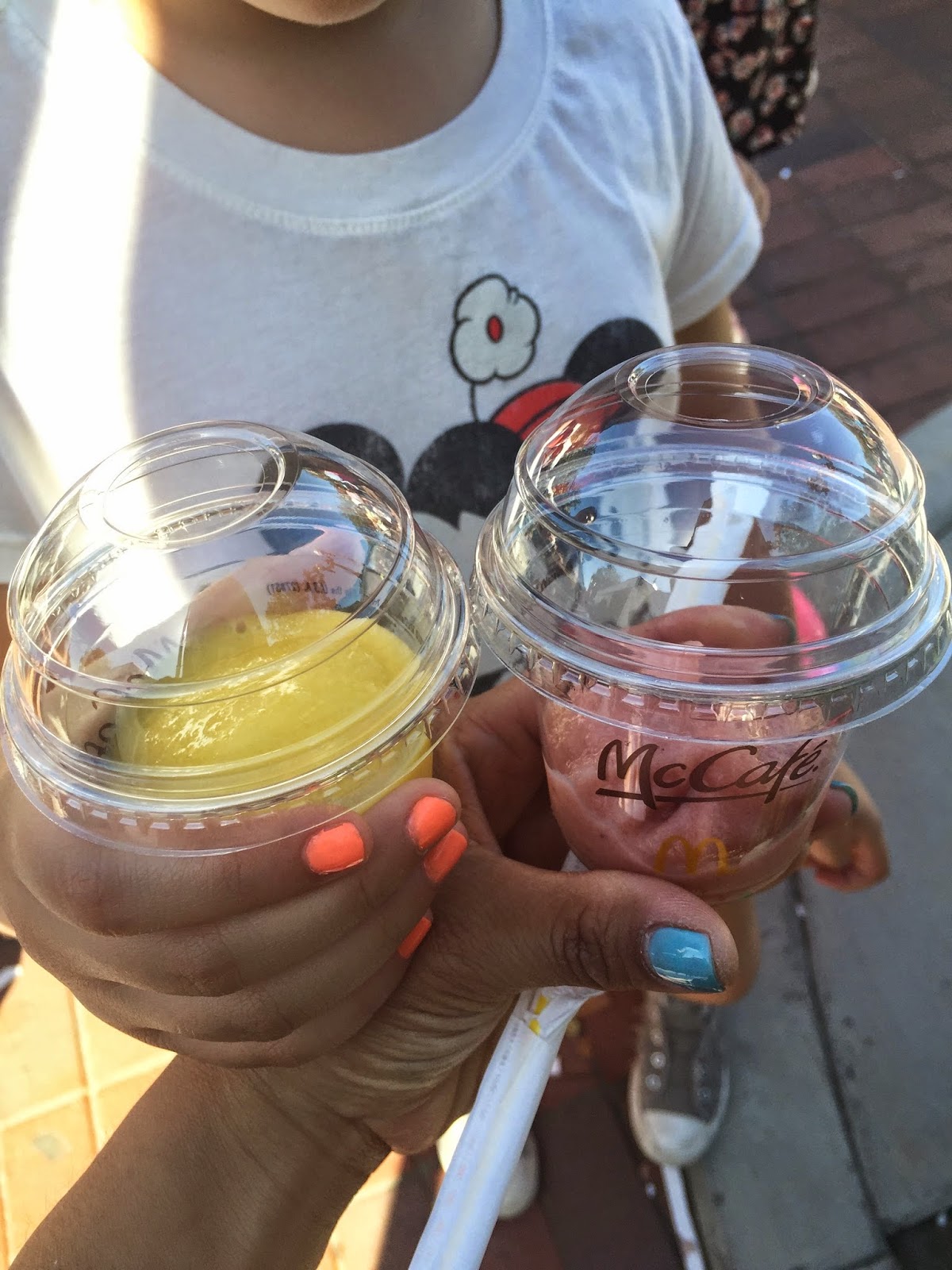 we all stopped in at this booth to get a free weight/BMI/blood pressure check. 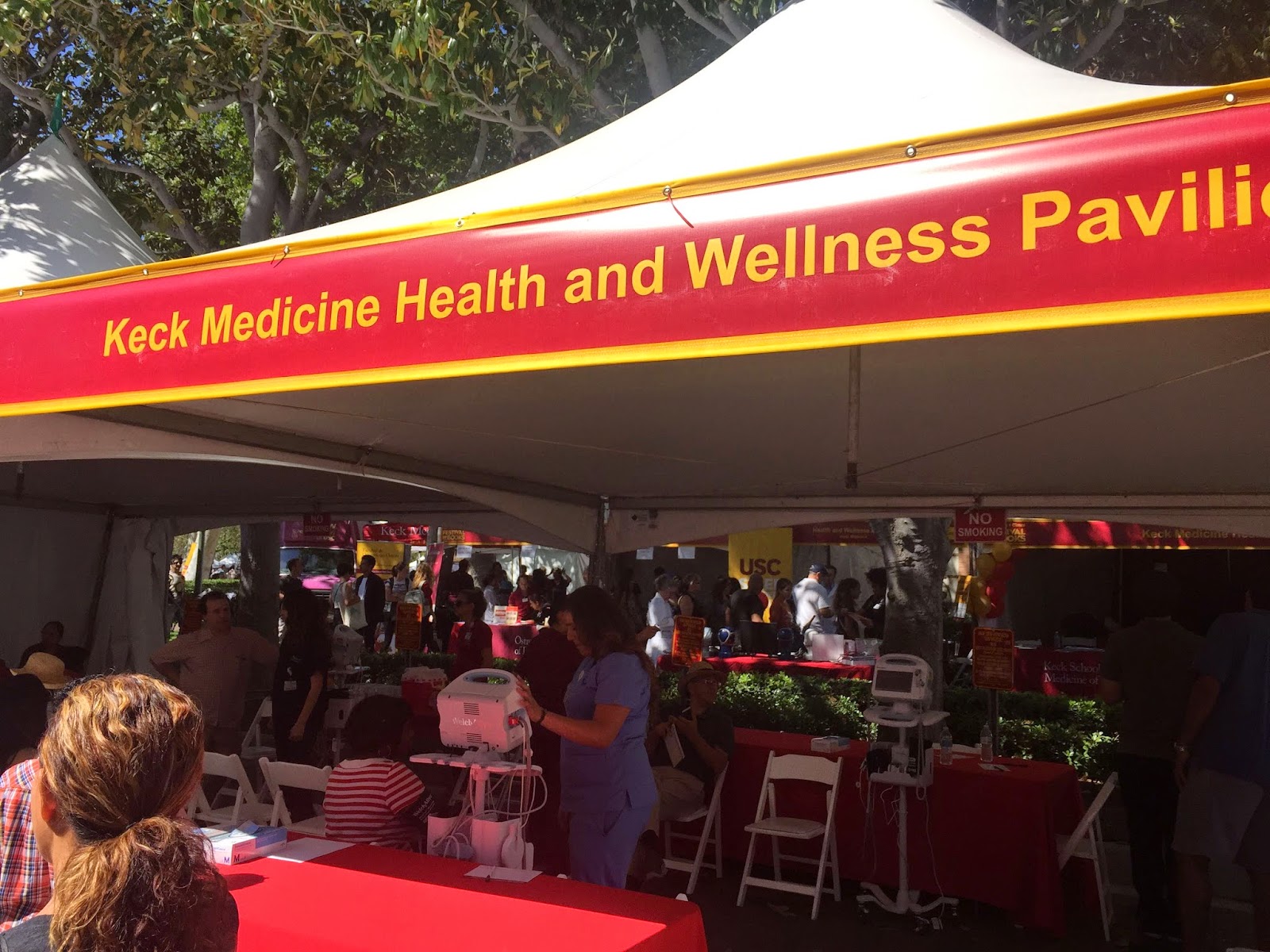 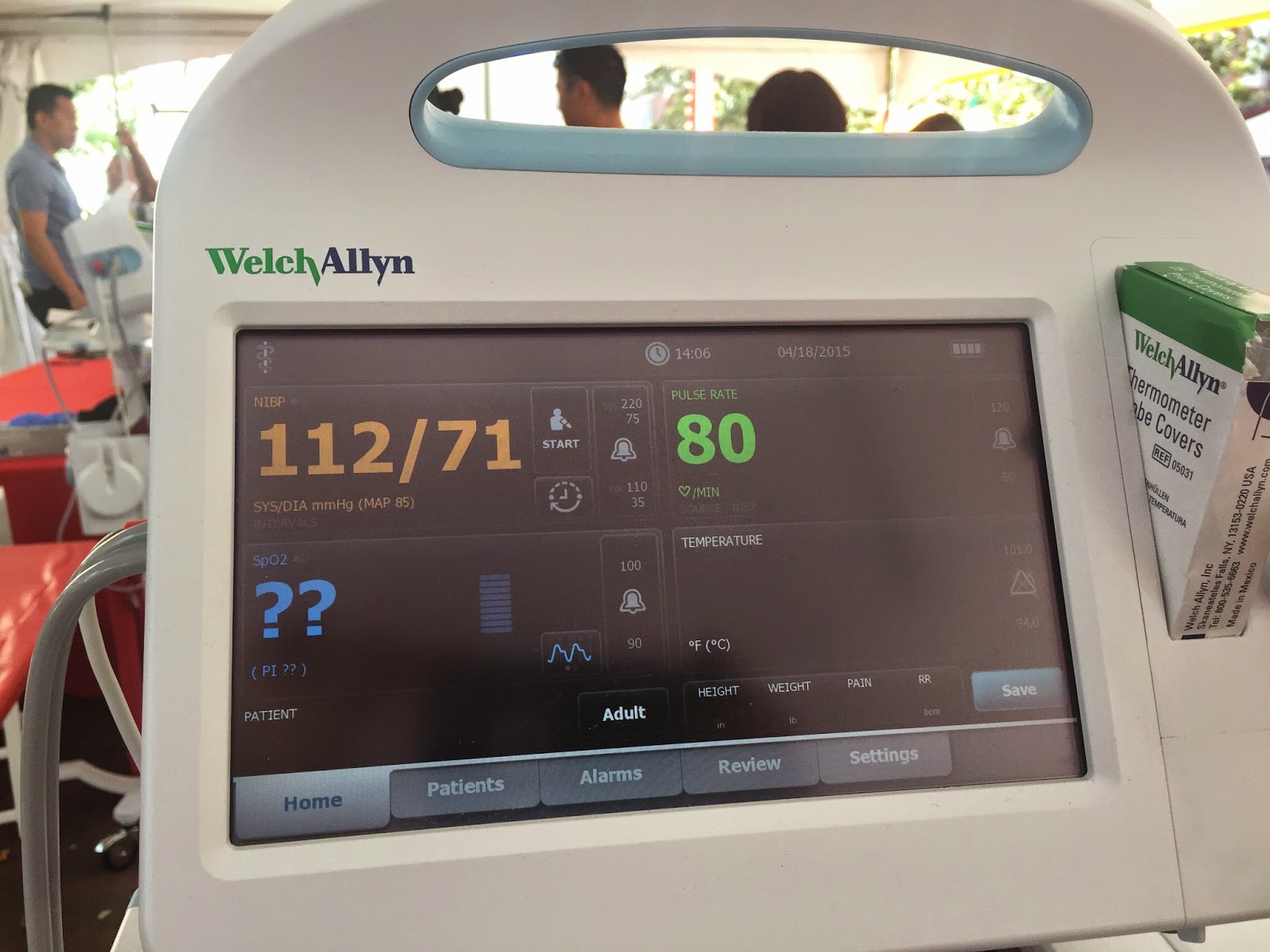 the bean wasn't all too sure about this one, but she sat down and suffered through it anyway.  that face, man.  kills me. 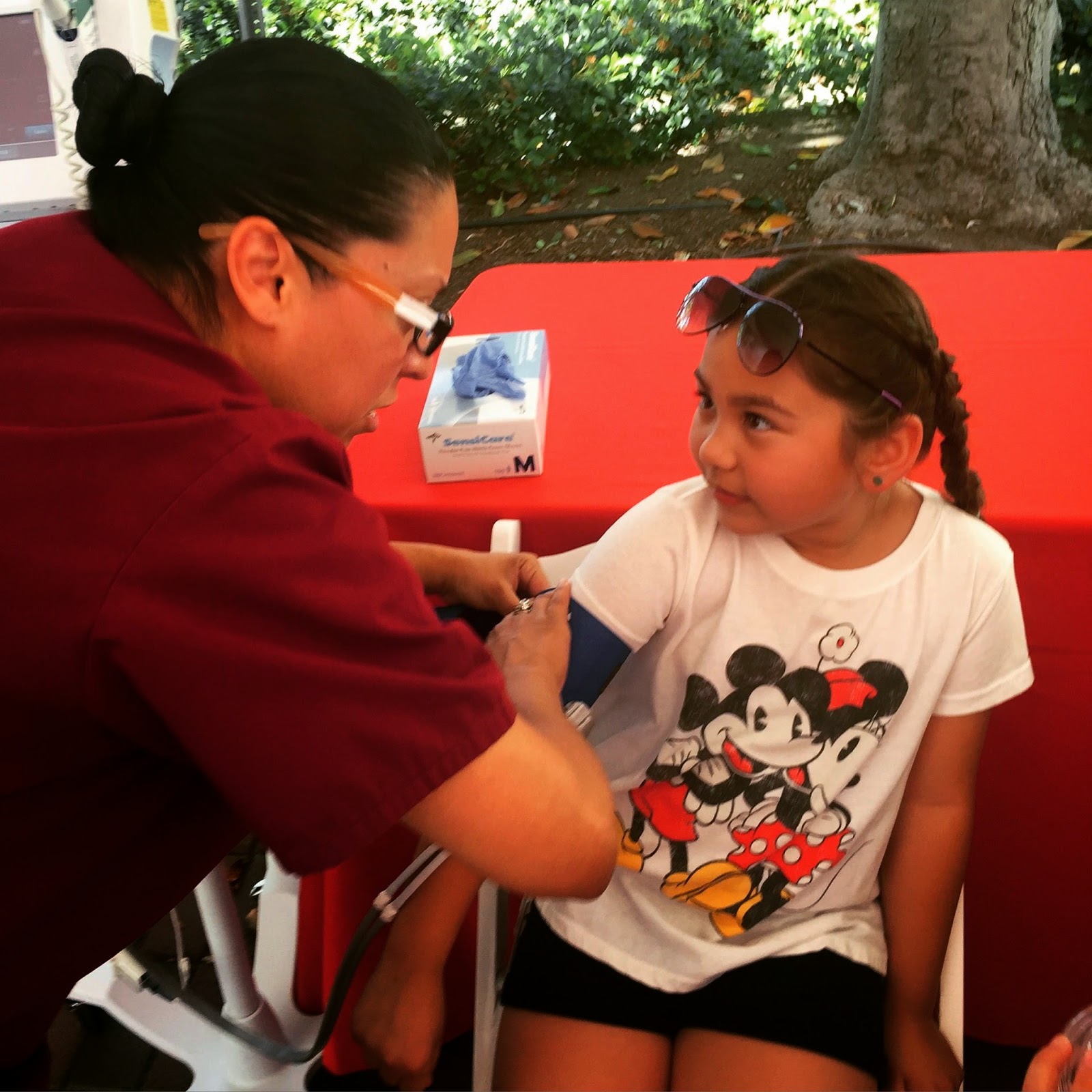 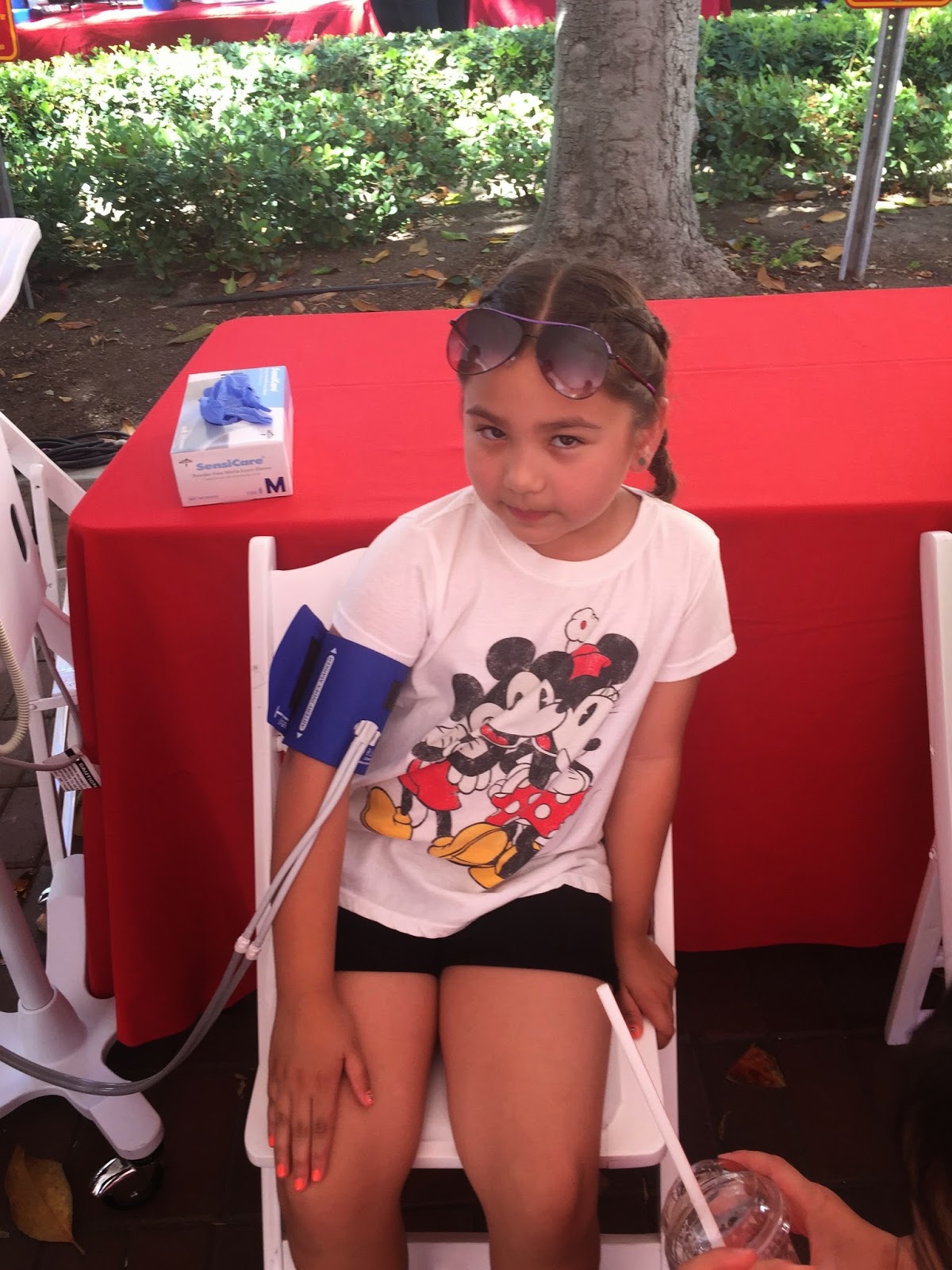 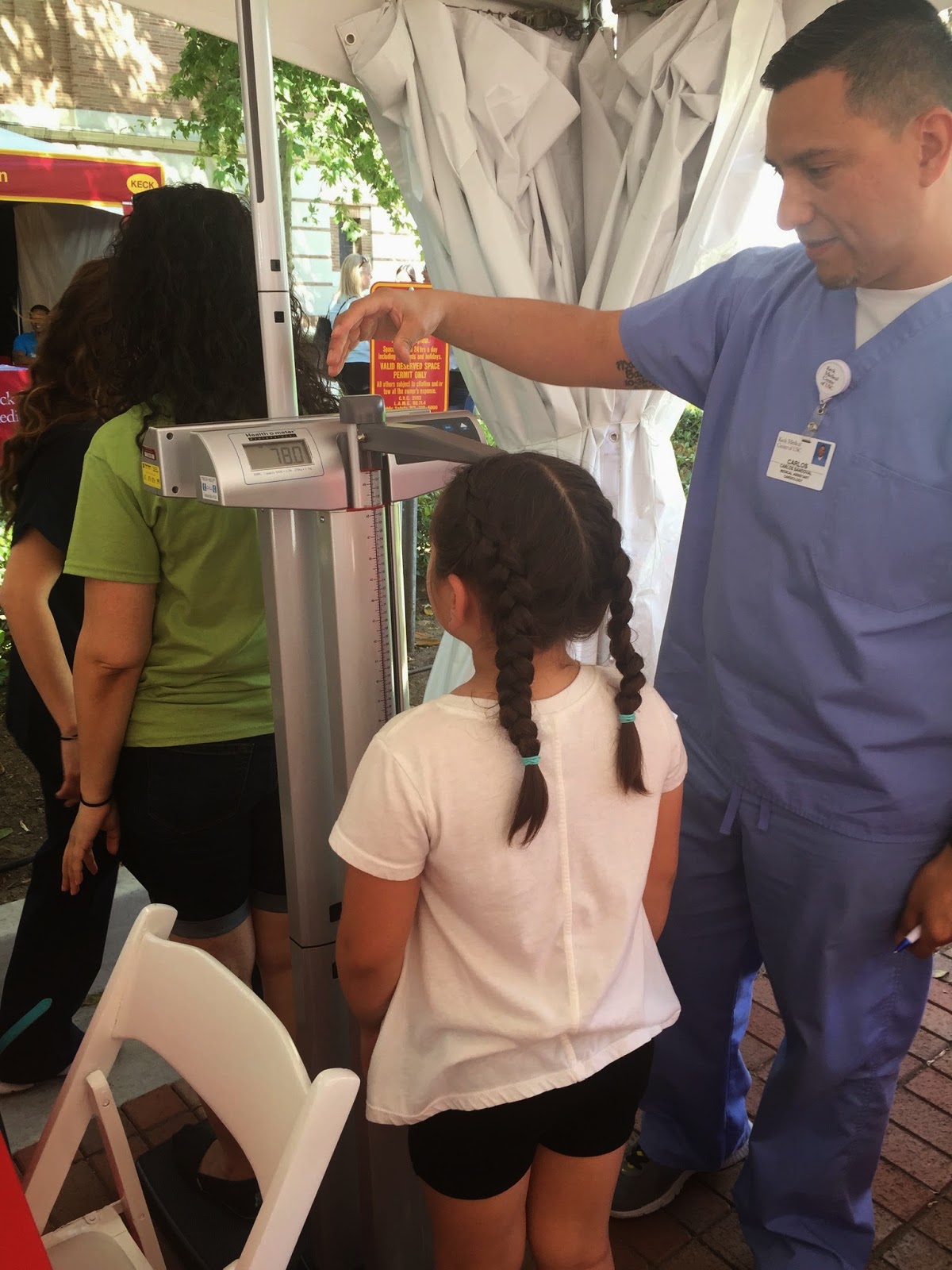 the oc fair is apparently celebrating its 125th year.  i had no idea the fair was that old. 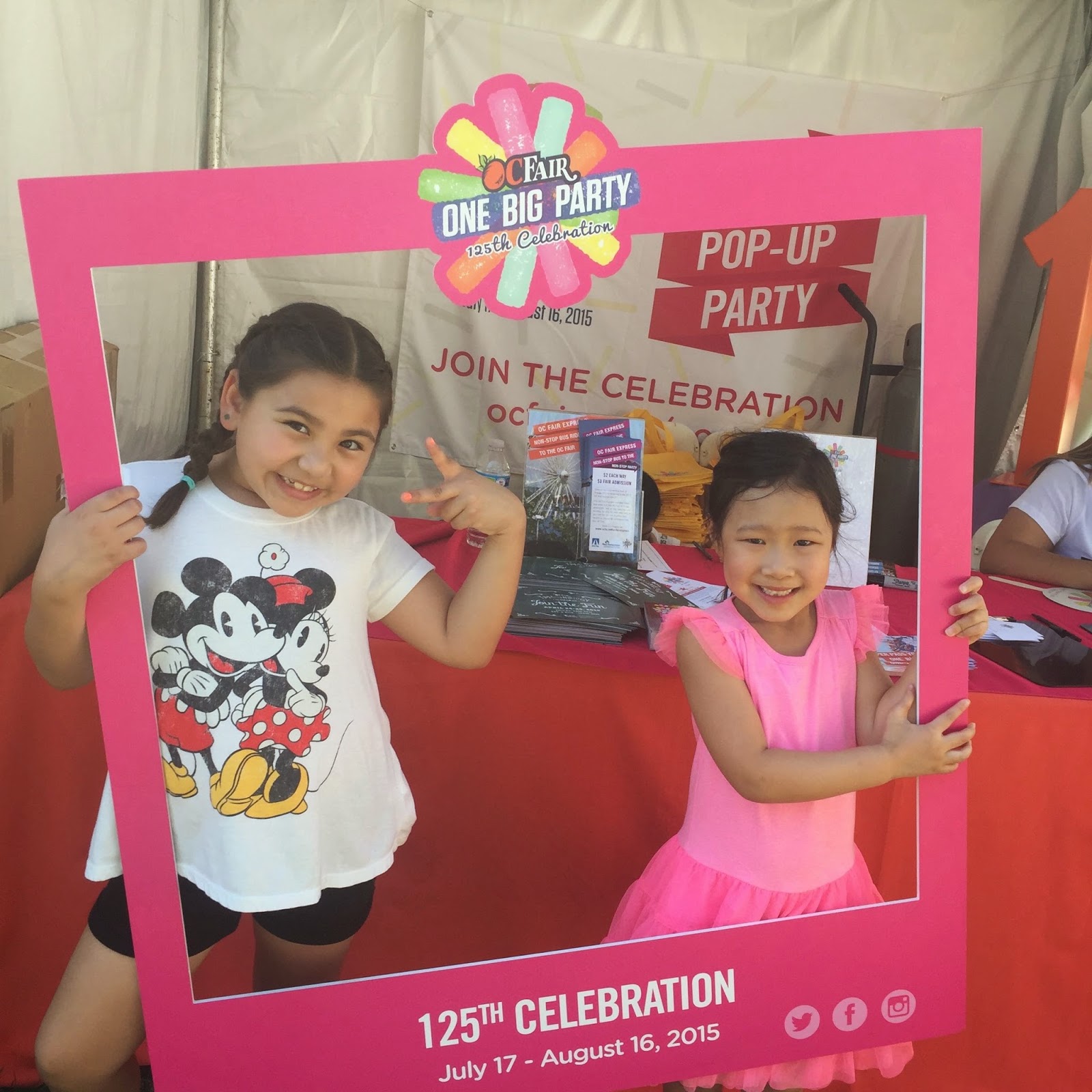 around the corner, they stopped to make a quick craft. 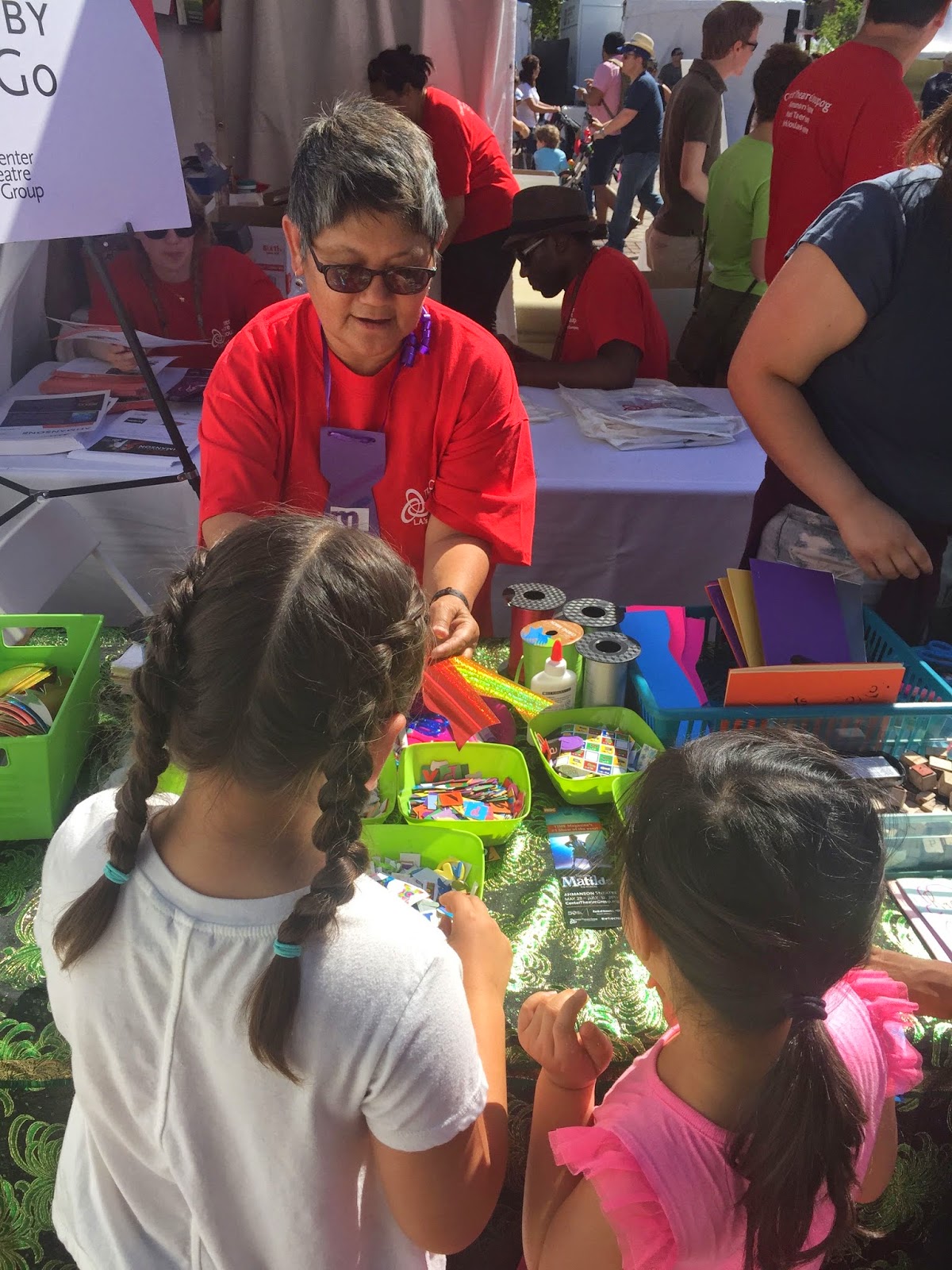 the cooking stage section was really sparse.  the stage was tiny, and there wasn't much to see.  but just a little ways away was the food truck court. 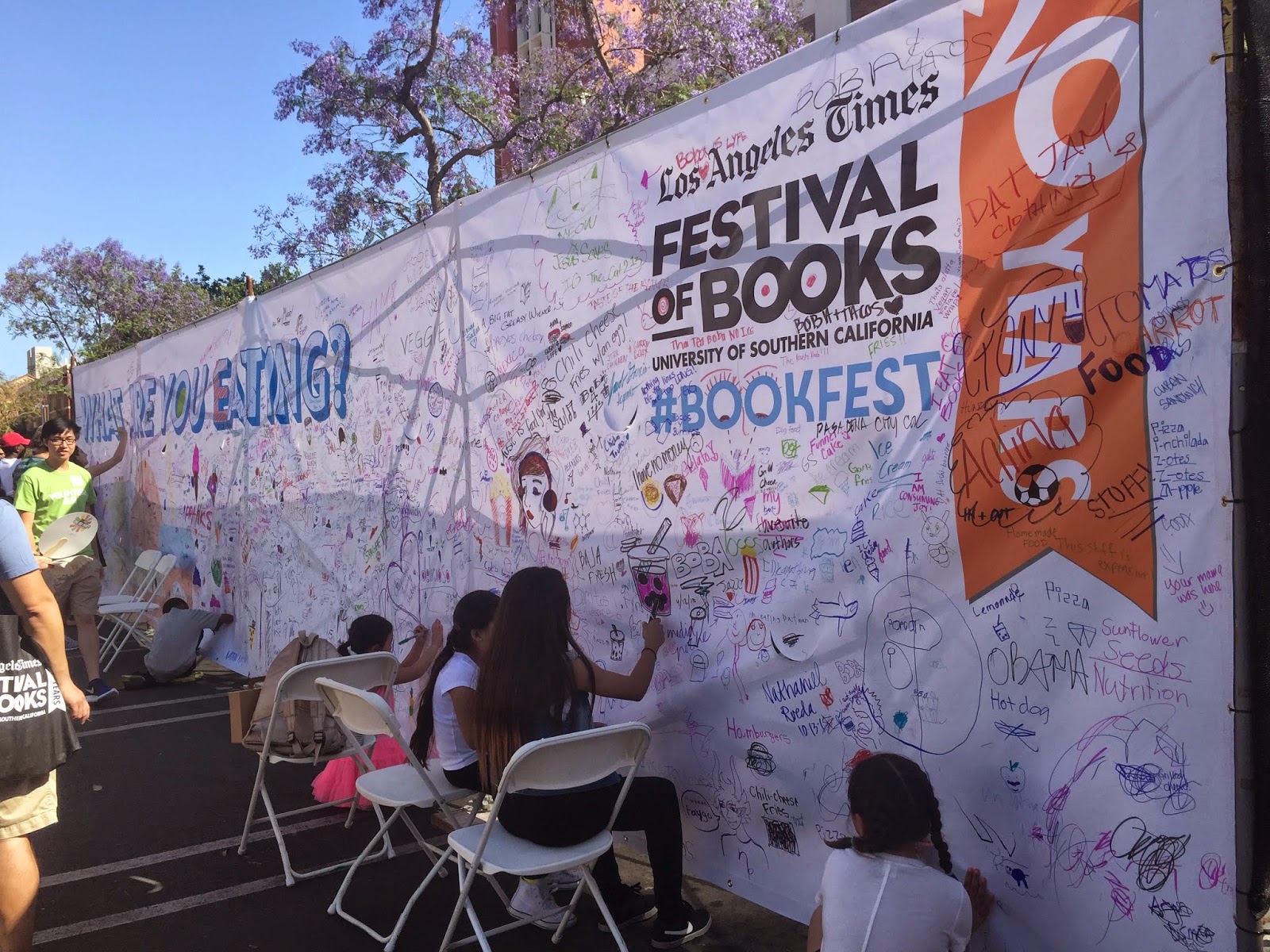 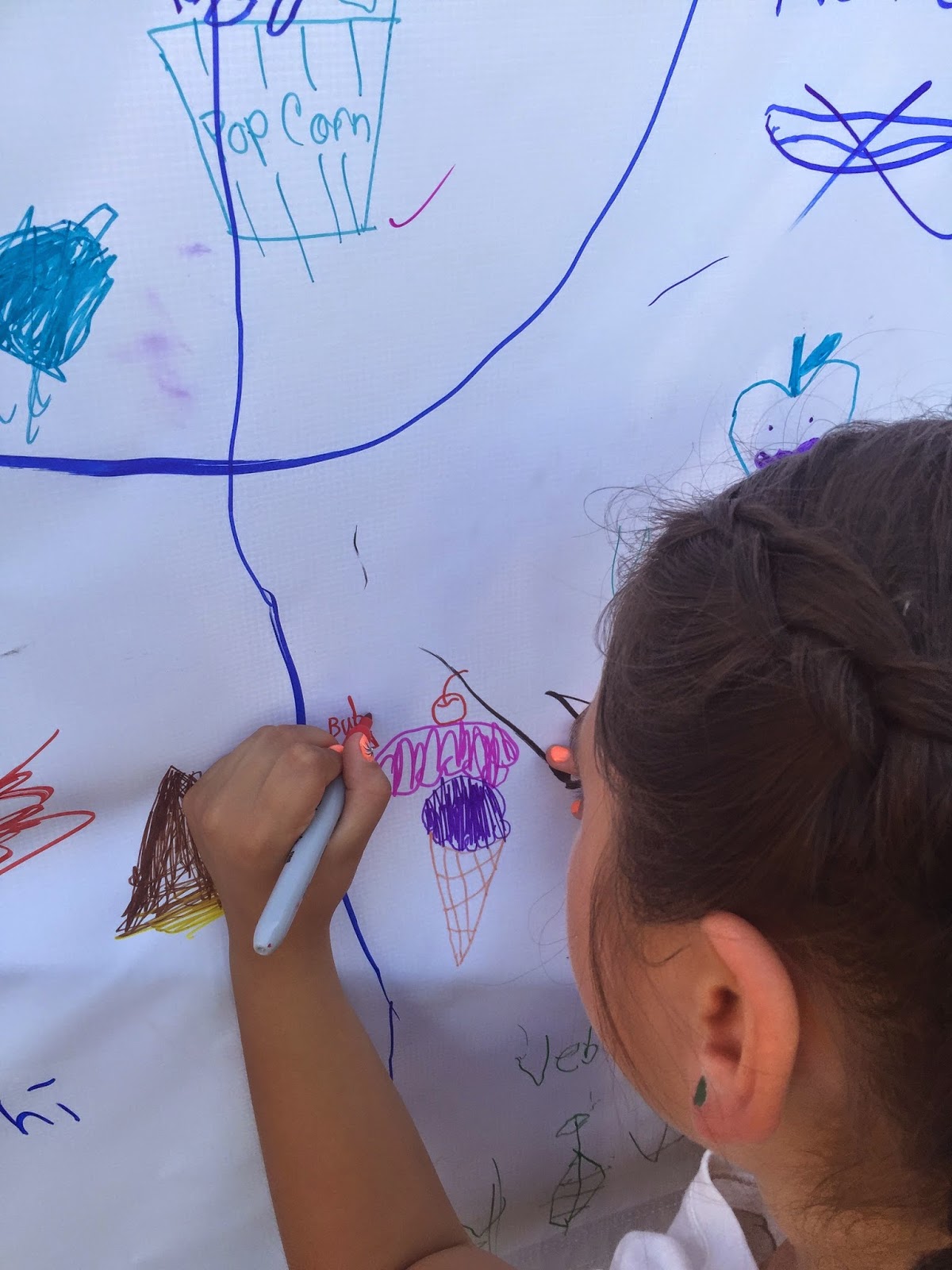 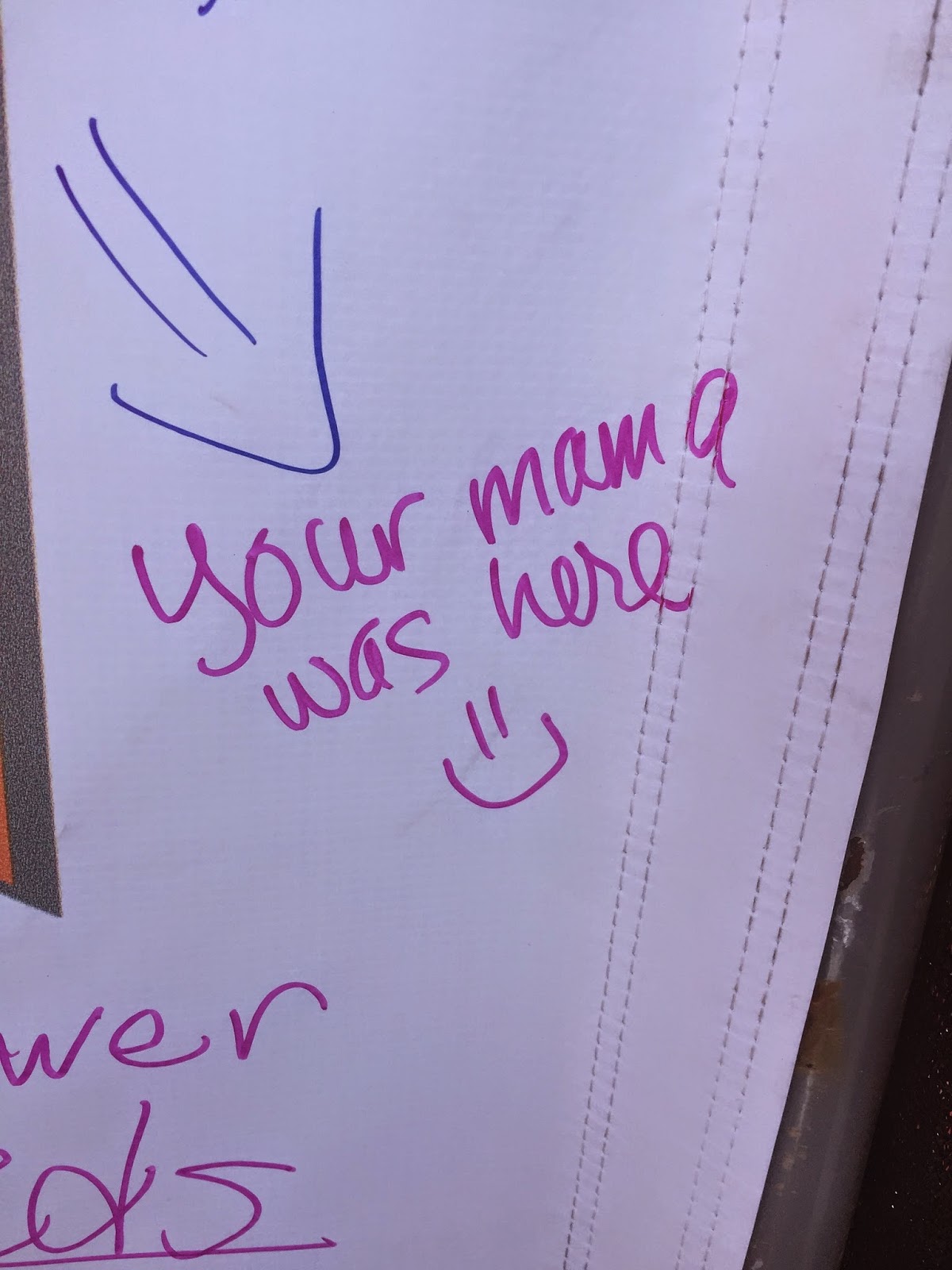 the pantages theater booth didn't have much, but they were promoting the crap out of the upcoming "phantom of the opera." 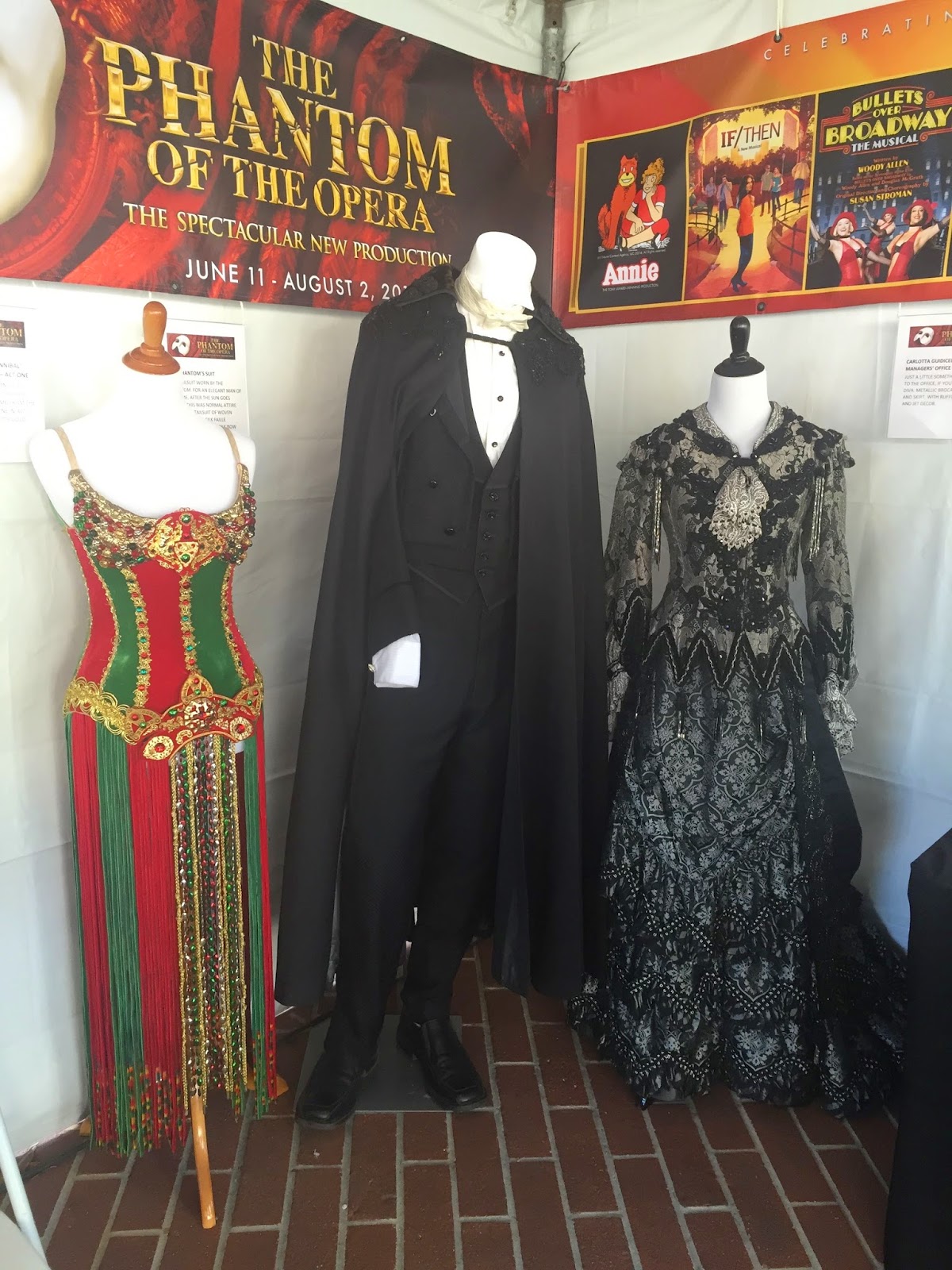 we each grabbed more freebies here: 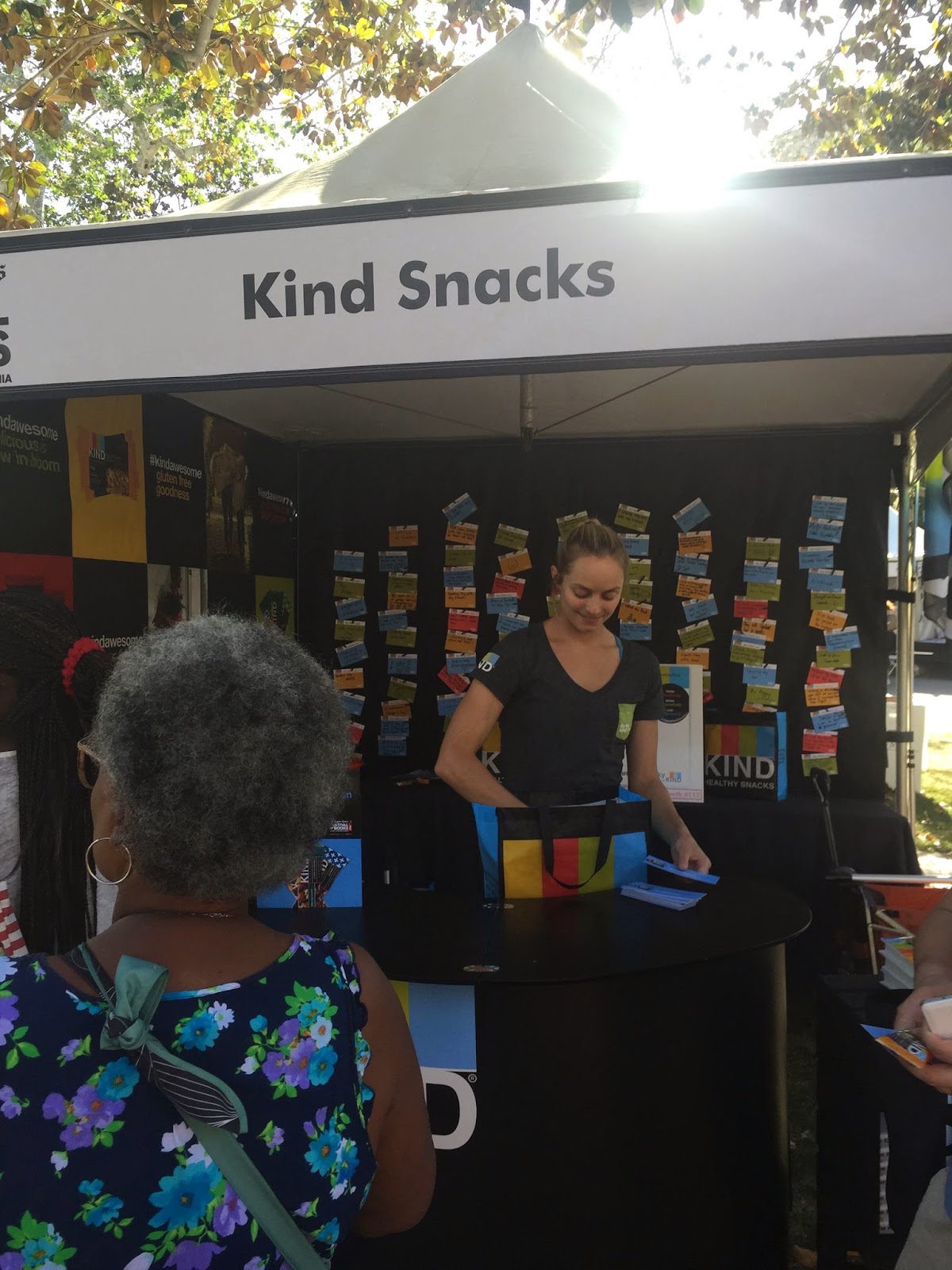 and stood in this line for a few minutes before deciding it wasn't worth it and heading back out to the parking lot to get outta there. 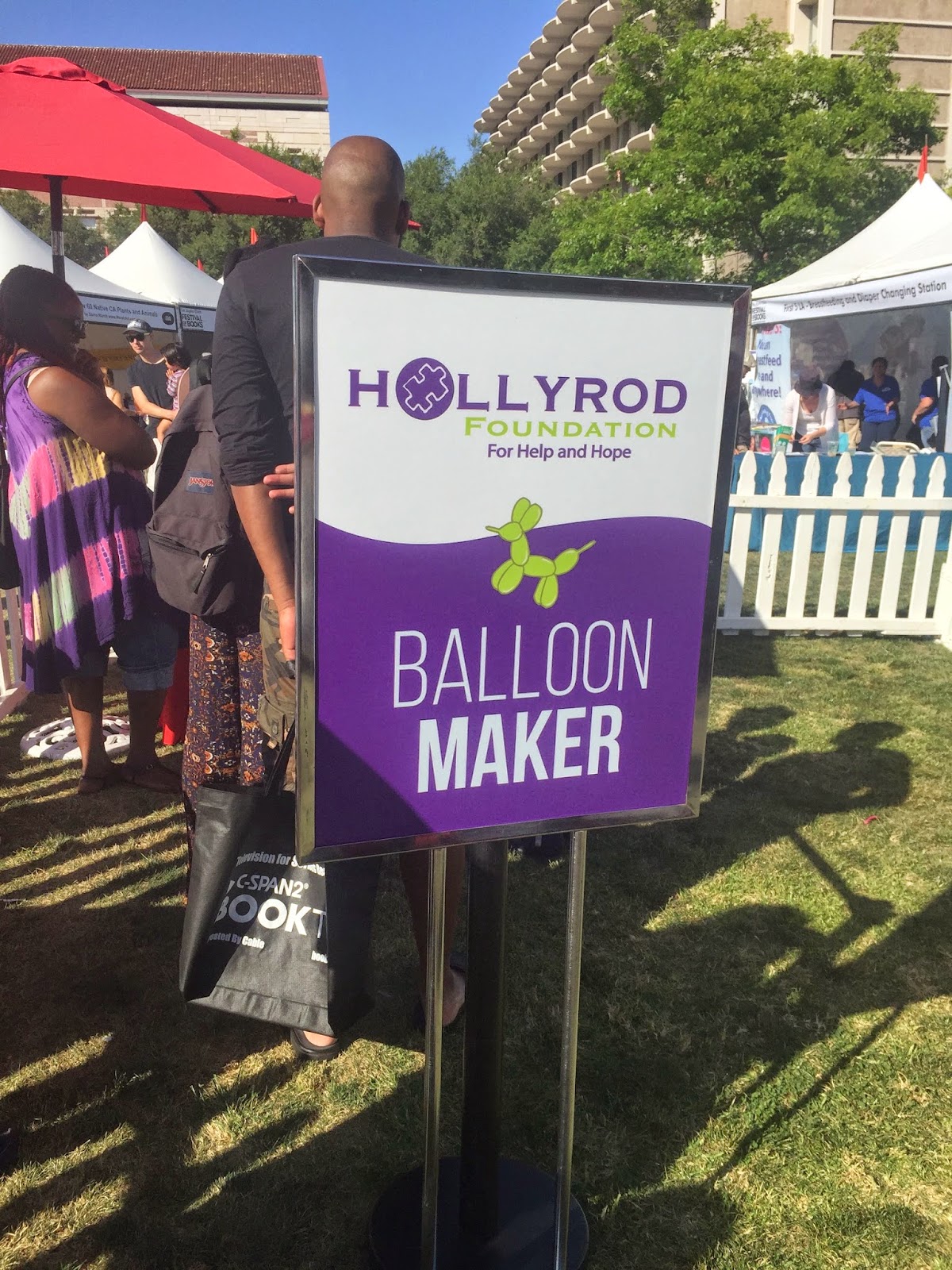 only at usc would they have a beach volleyball court. 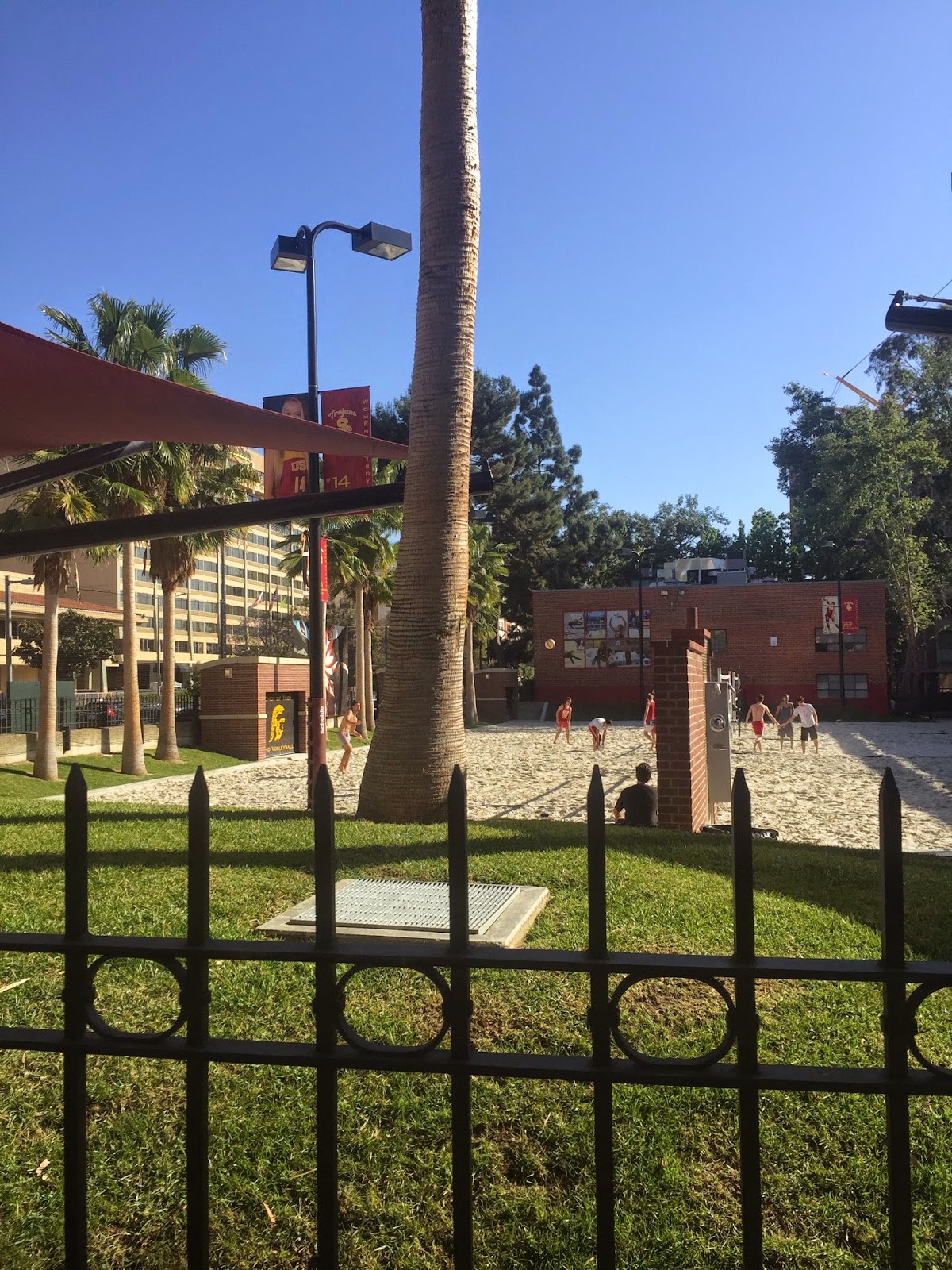 oh, and across the street we stumbled upon a major spoiler for this season of "hell's kitchen."  don't look if you don't want to know. 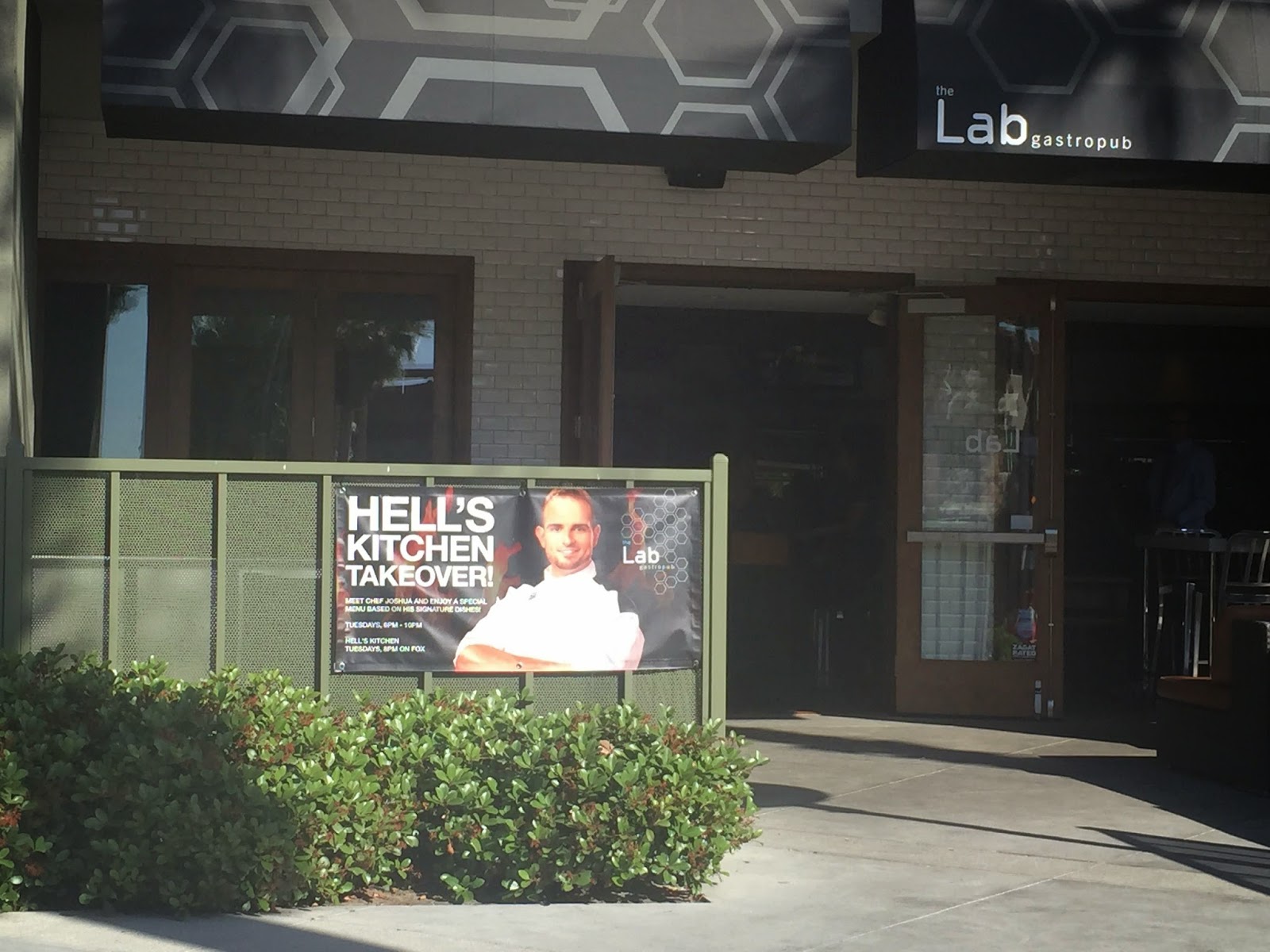 while it was fun, it was slightly disappointing this time around.  it seemed smaller, with less to do and not as many vendors and things to visit.  that's okay, though.  we'd still had a good time hanging out and checking things out, and maybe next year it'll be better.  we'll see.
at April 23, 2015