when i volunteered to work at the expo for the hollywood half - being part of team superhero, it seems like it should be mandatory - i hadn't realized that it would fall on the last day of the bean's spring break.  d-oh!  luckily, the teen had the day off from work and so i proposed a plan:  i'd take the train to the expo (you know, since now i'm a pro at the metrolink thing), they'd sleep in and hang out at home before coming out to pick me up when my shift was over and then we'd head to universal studios for a little playtime.  it was perfect, and a great way to squeeze one more fun activity into the week.

as before, riding the train was easy and convenient.  they dropped me off at the station early enough that i managed to catch an earlier train, which got me to hollywood & vine a good half hour before i needed to report for duty.  i thought the decor in the station was pretty cool, too - film reels adorned the entire ceiling. 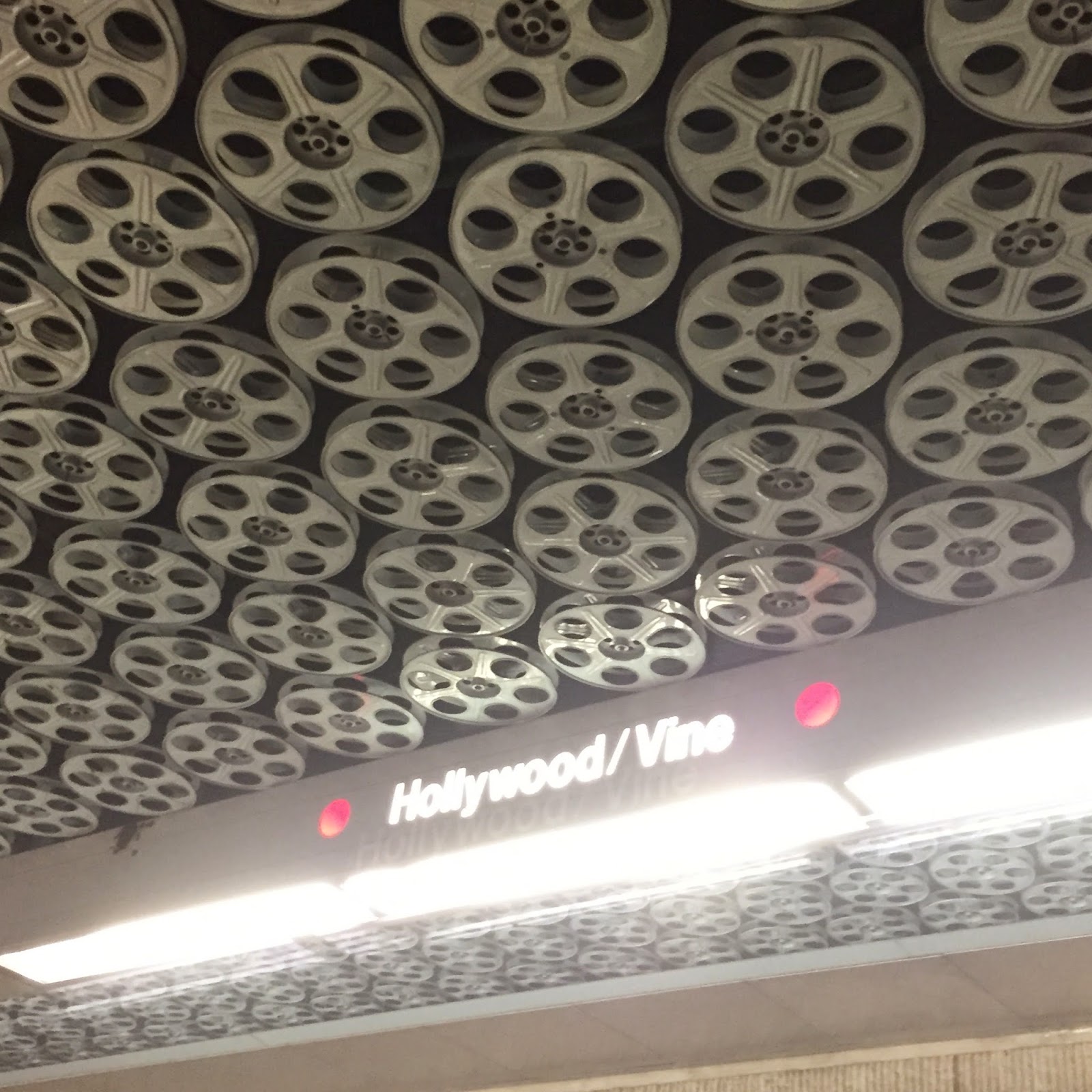 having skipped breakfast at home in favor of a little extra sleep, i was pretty excited to find a starbucks right on the corner.  i sat and enjoyed a tasty sandwich and some coffee before taking the short walk down to the hollywood palladium, just a couple of blocks away on sunset boulevard.  as i spied the giant billboards on the nickelodeon studio building across the street, i realized that the bean would likely lose her shit a little when they came to pick me up. 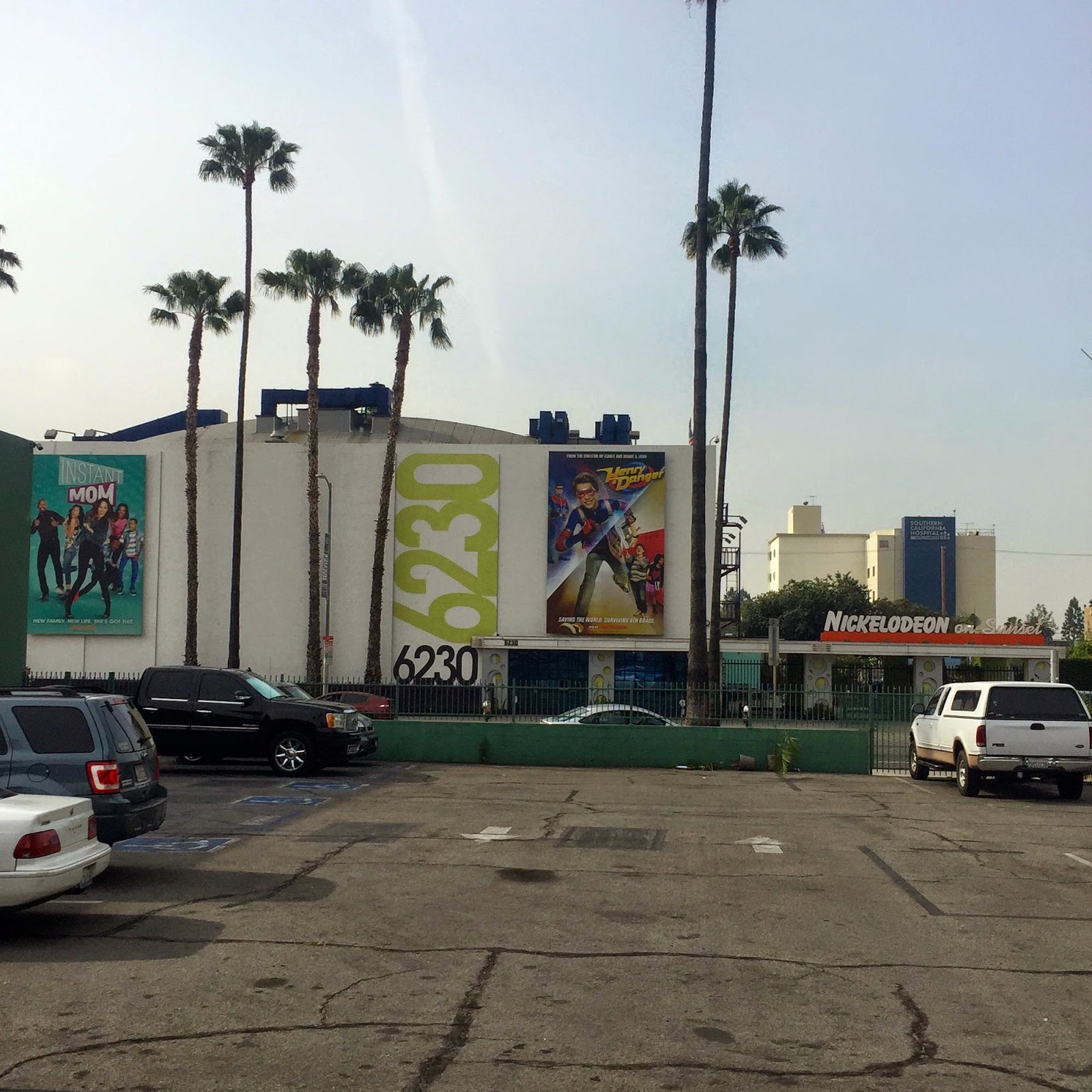 there was already a group of folks waiting to be assigned to their tasks at the entrance to the theater, and it was nice to see a few that i knew and get caught up in the excitement of the half.  a lot of us have been running it since the beginning, and it's kind of cool to be a part of the "legacy" group. 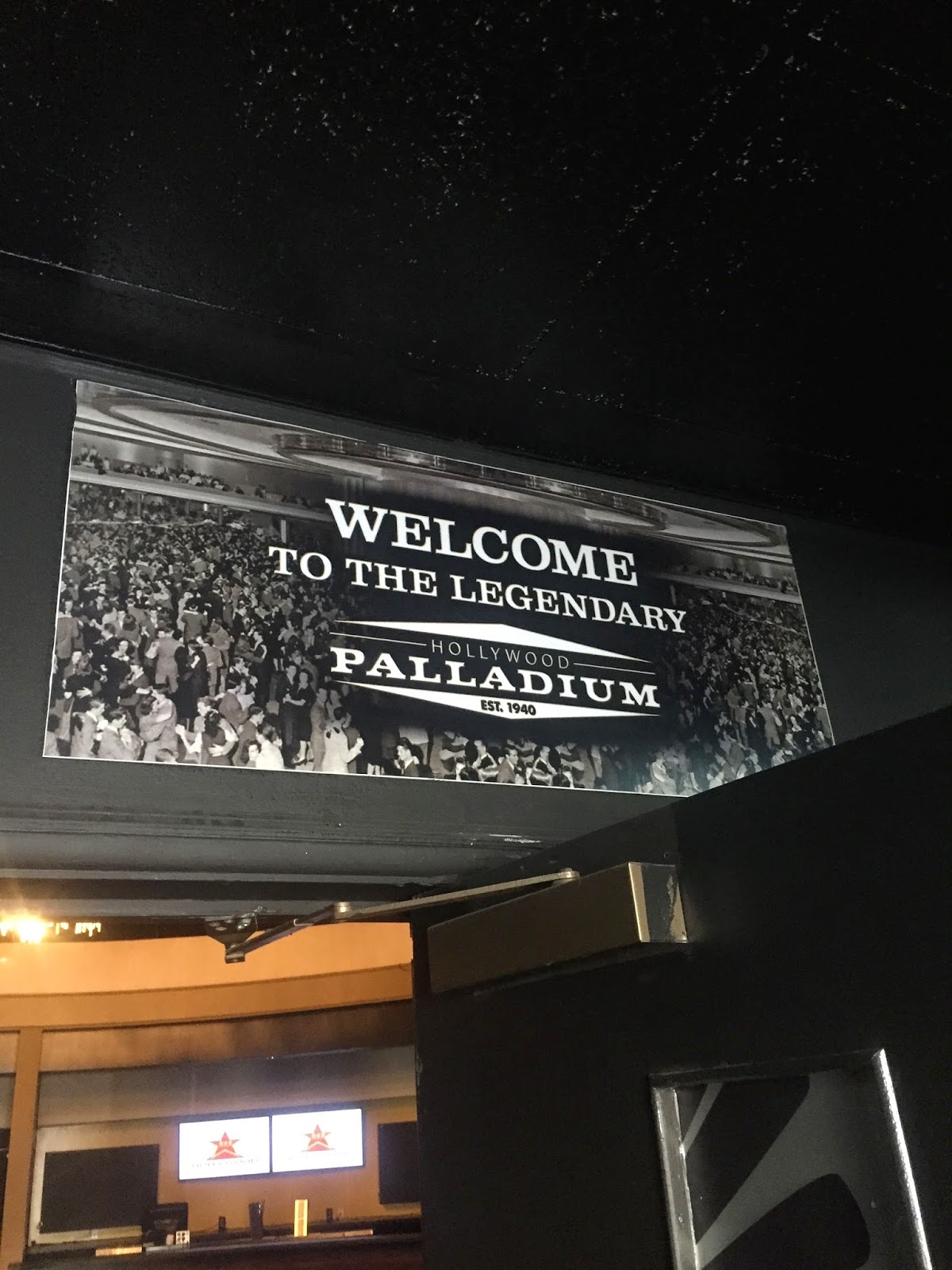 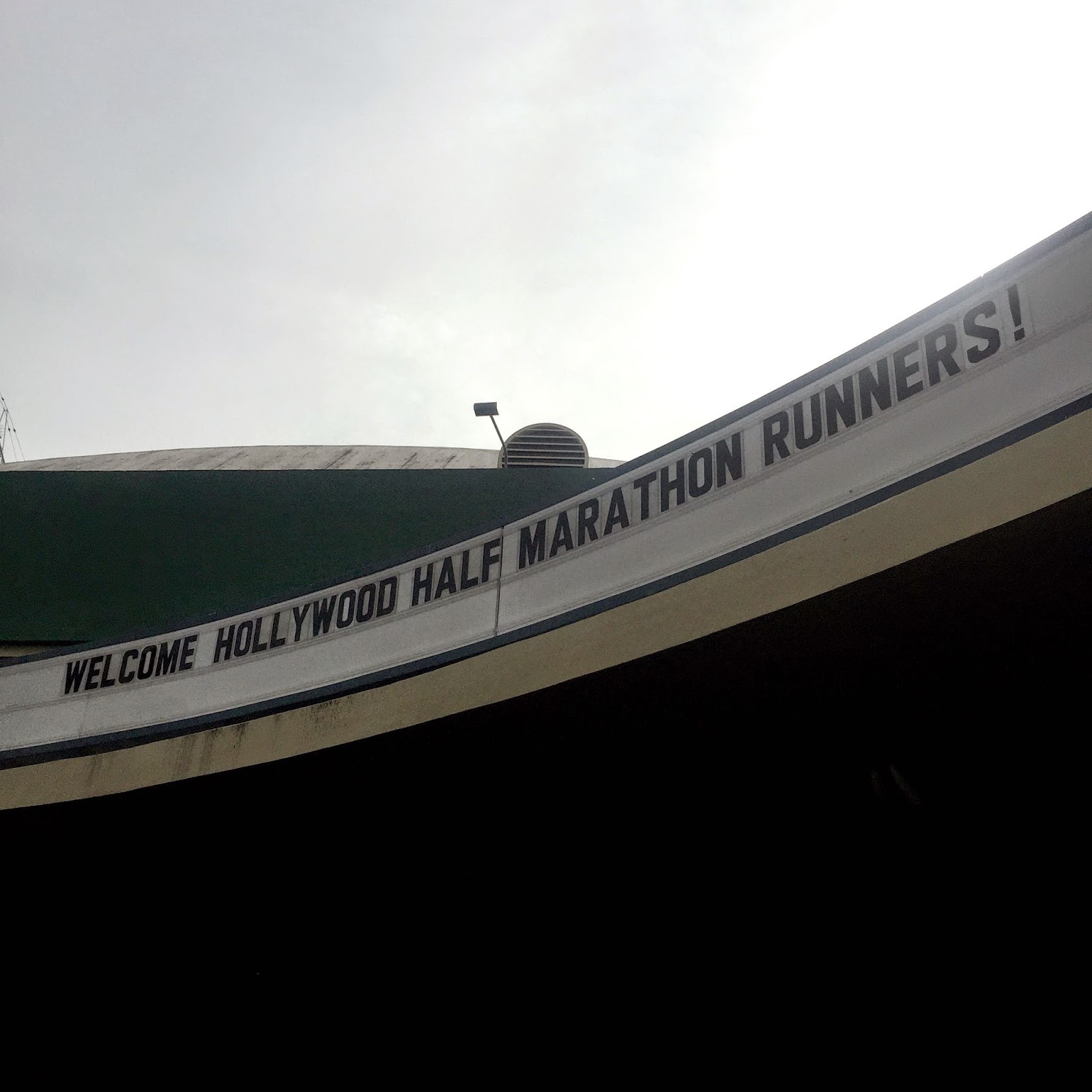 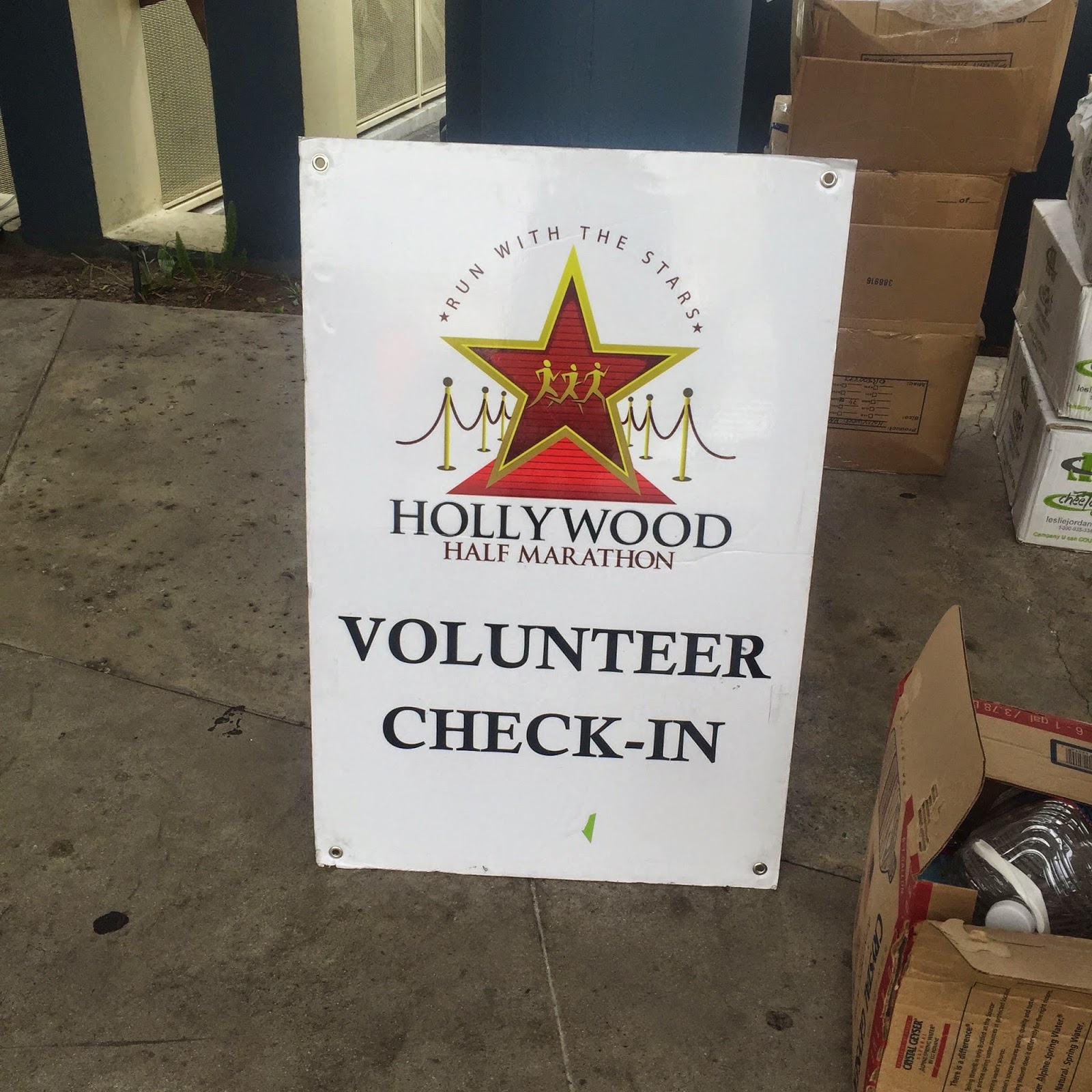 before we were open to the public, i figured i might as well grab my own bib.  i was kind of bummed to realize that since i'd registered so late this year, i'd missed the cutoff date to have my name printed on it - and it wasn't the fancy-schmancy legacy bib, either.  sadness. 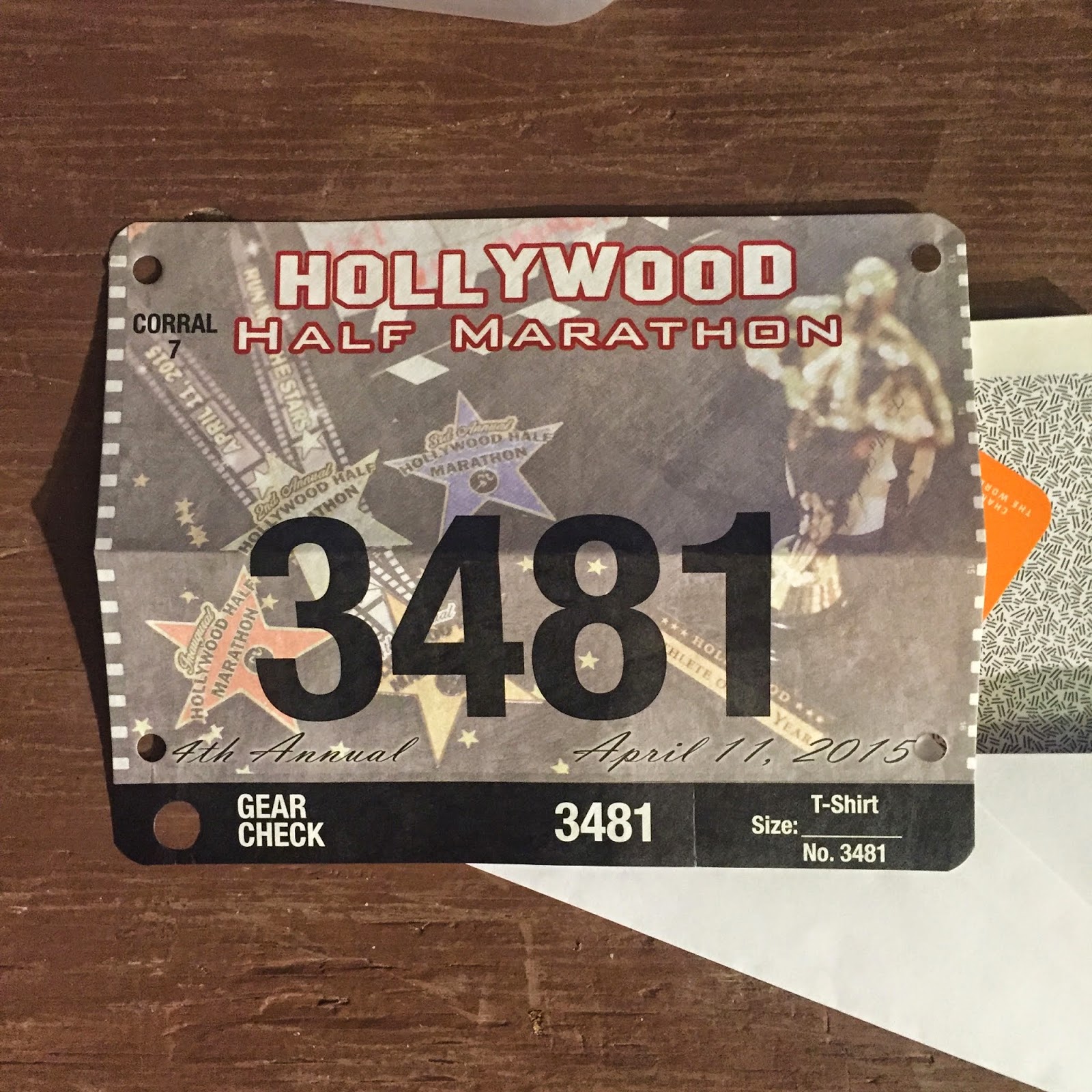 no worries, though.  i headed to the VIP lounge to say hello to my friends and pick up my legacy perk - last year it was a special tech shirt, this year a running hat. 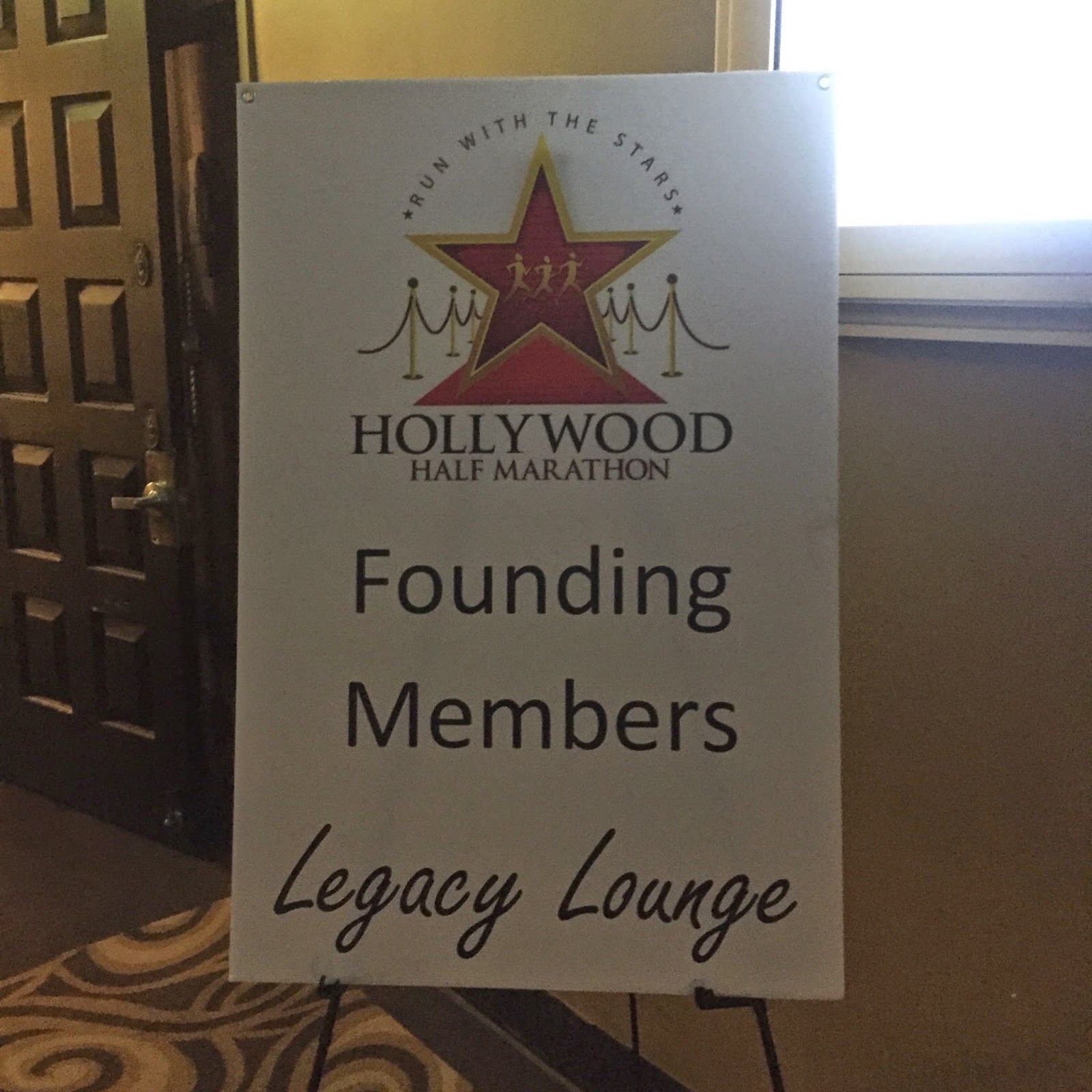 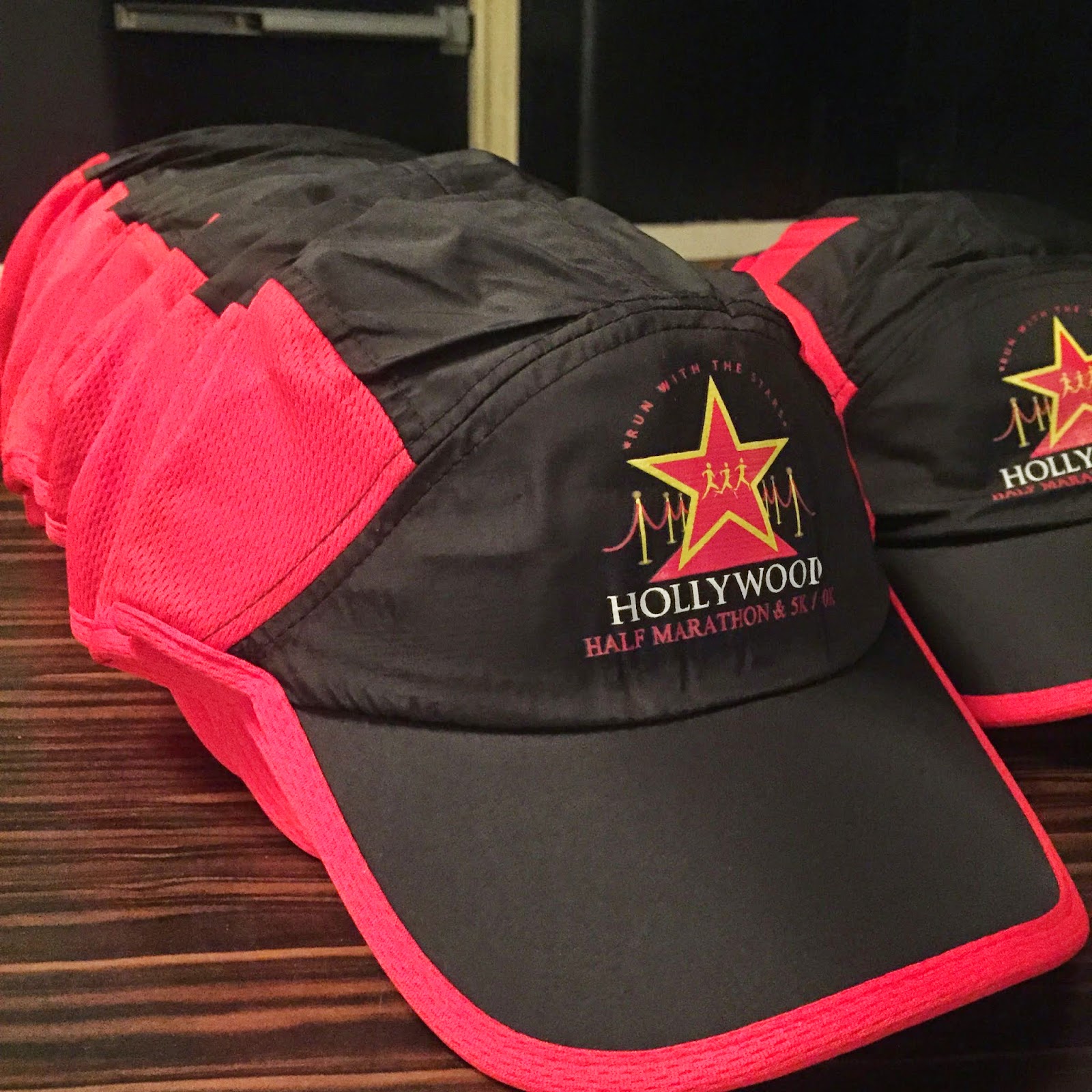 working bib pick-up was fun as usual.  there was a lot of excitement in the air, and it was contagious. since i wasn't really in the zone yet for this run, it helped add to my enthusiasm and relieve the bit of anxiety i was feeling. 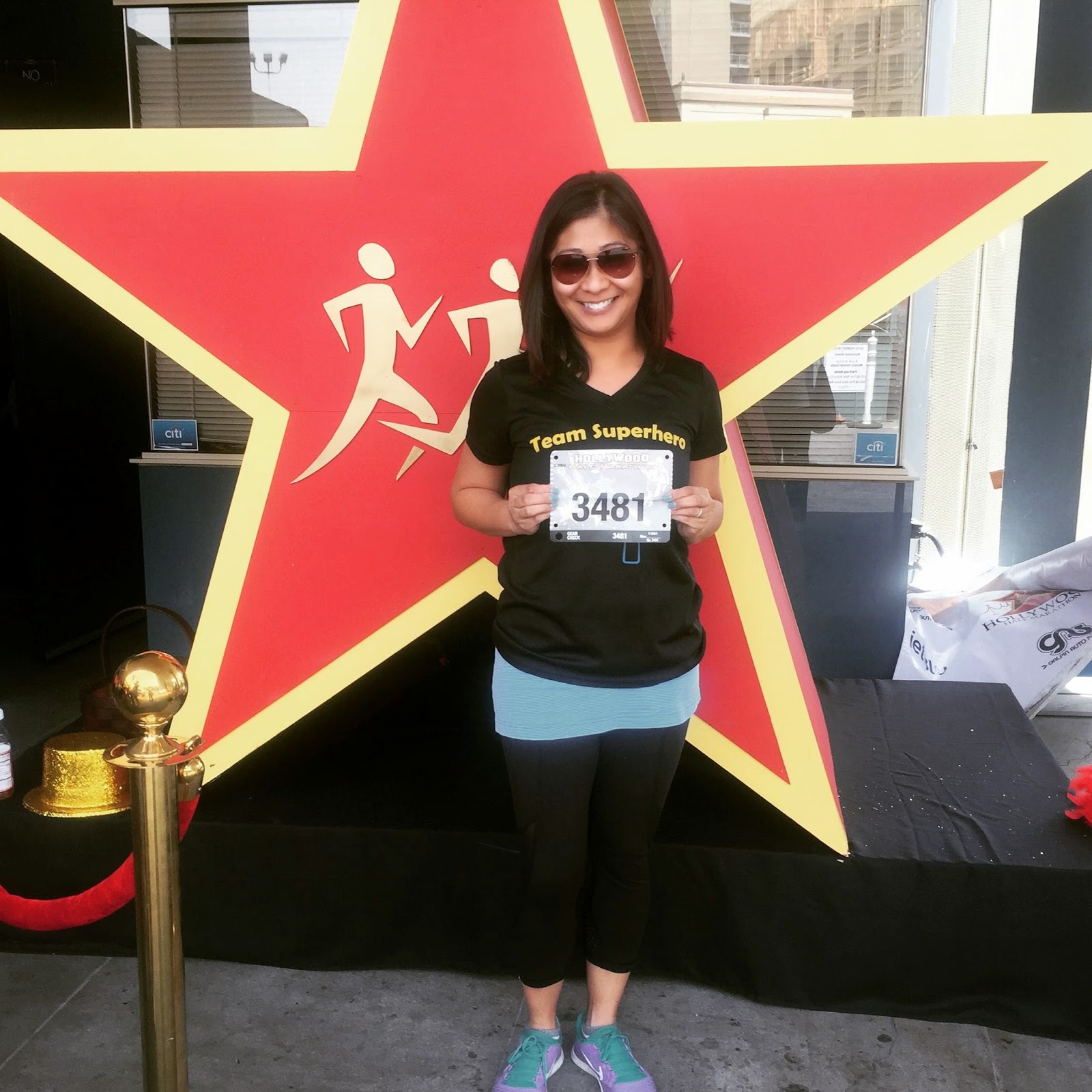 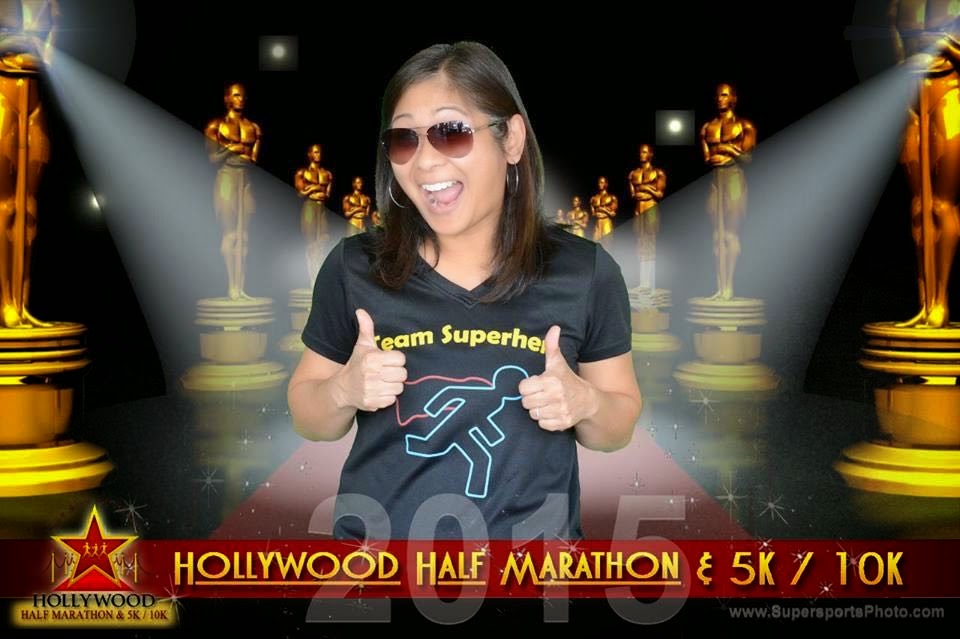 and before the girls picked me up, i remembered to go inside the expo and sign up for the virtual half - a way to complete my collection of hollywood half star medals.  they'd done one in hollywood, florida back in 2012 and this was the only way i was gonna get it. the half the next day would qualify to earn it, so hey - why not, right? 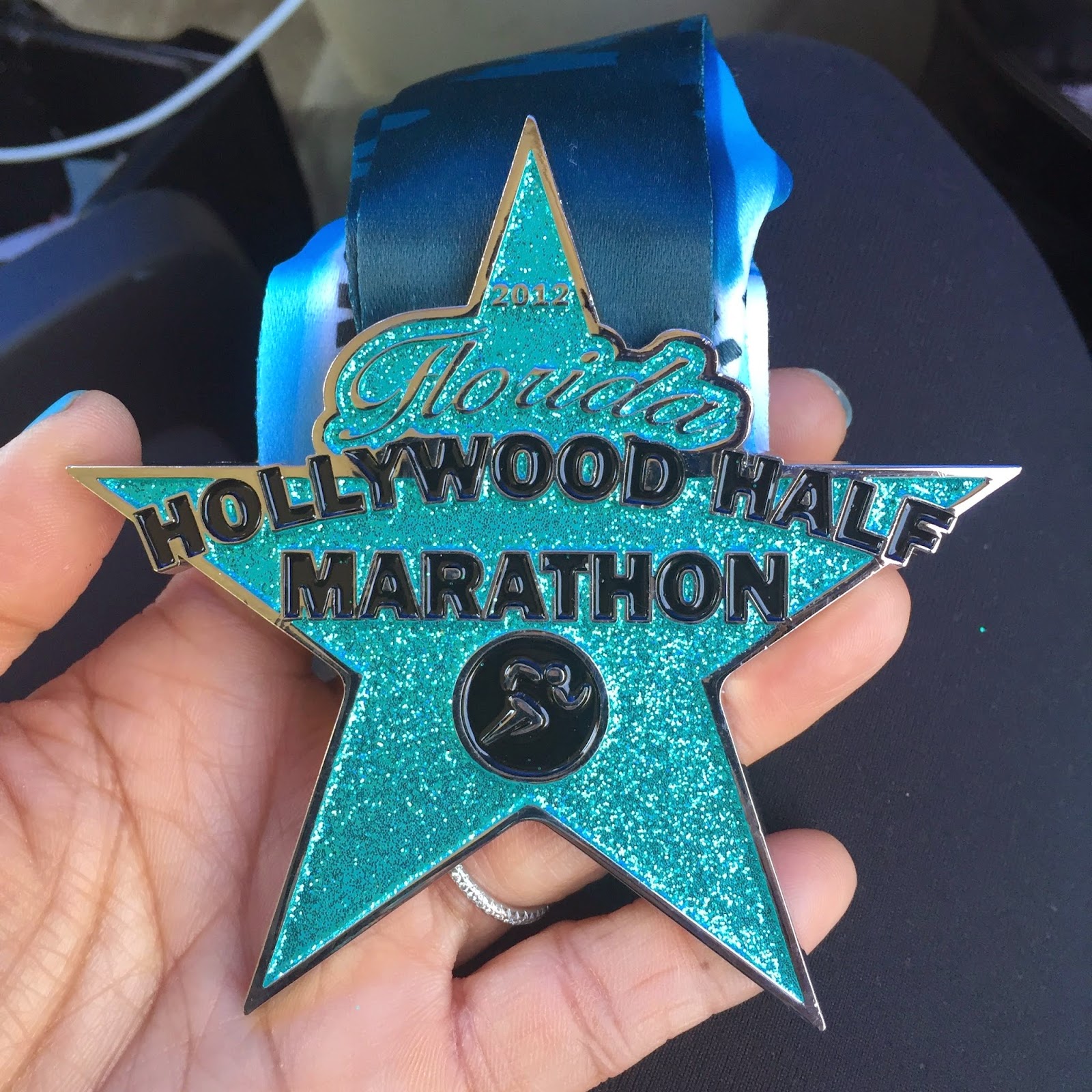 when we got to universal studios, our first stop was the same as it always is - to visit our friends gru and the minions. 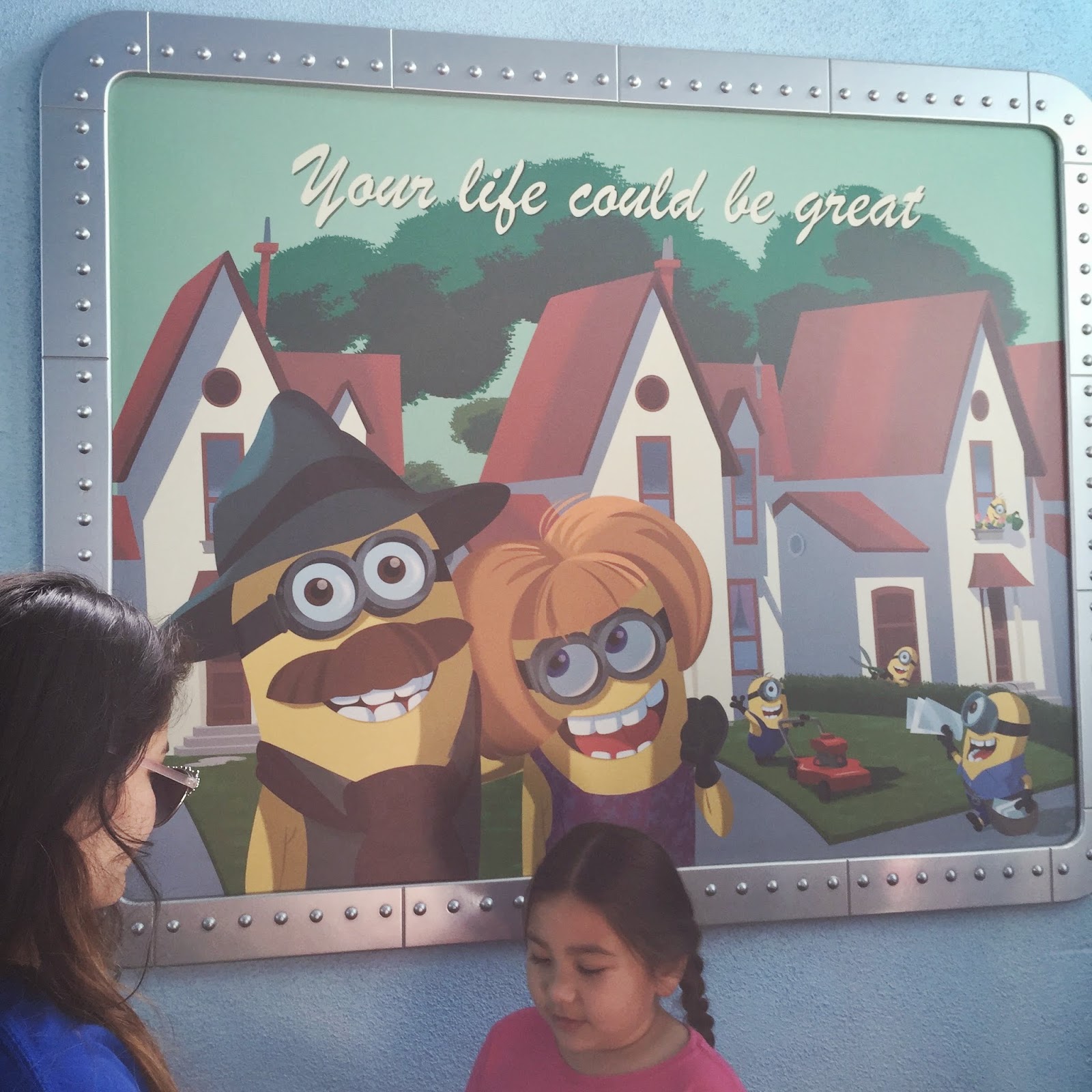 because no trip to universal is complete without it, we hopped onto the tram to take the backlot tour for the bazillionth time. 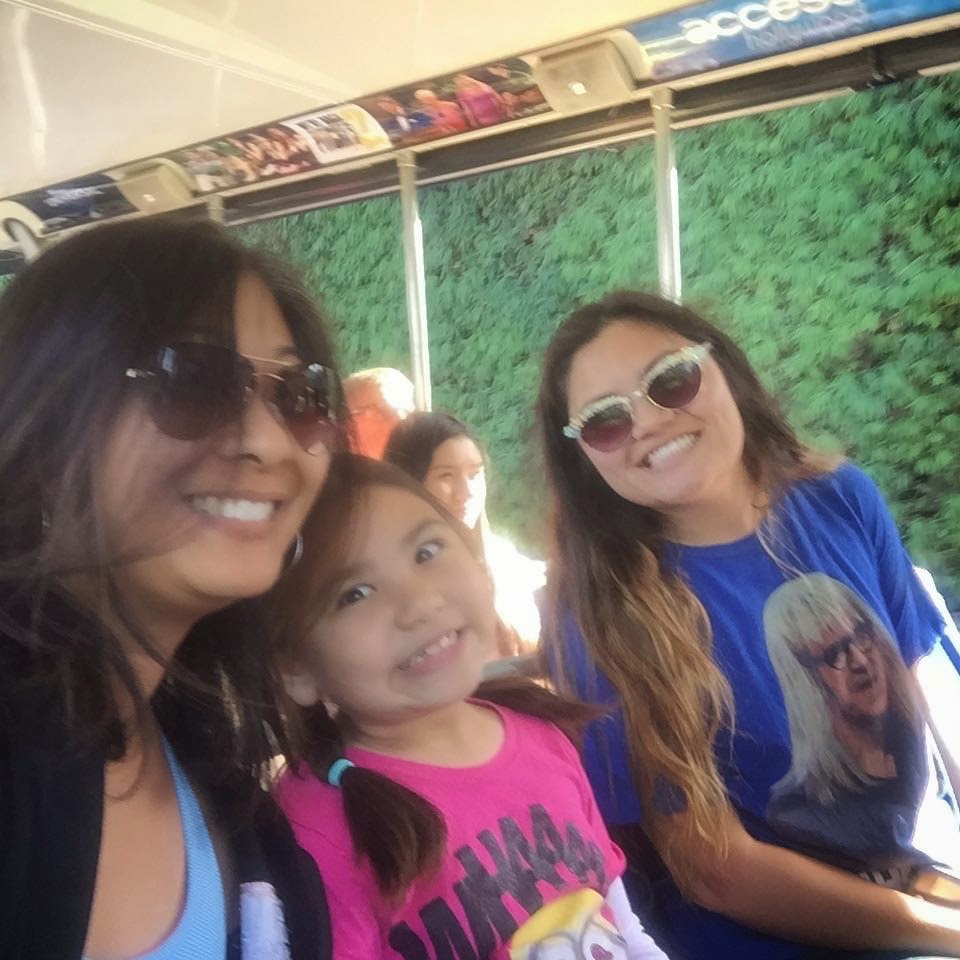 see?  just like being in new york city.  sort of. 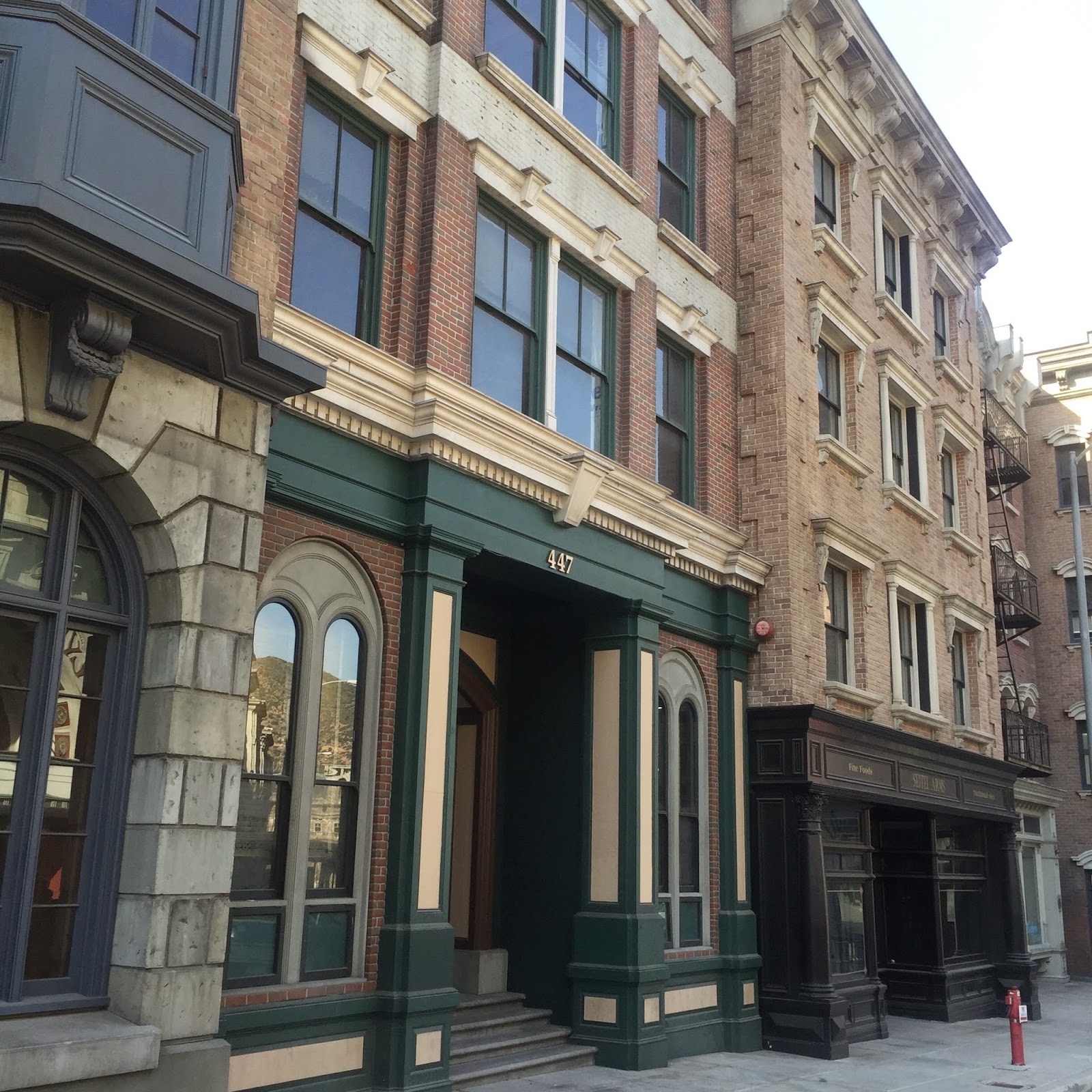 since our last visit, we noticed that the walls that had been up near the simpsons ride had come down, revealing some familiar (if you've ever watched the show) scenery. 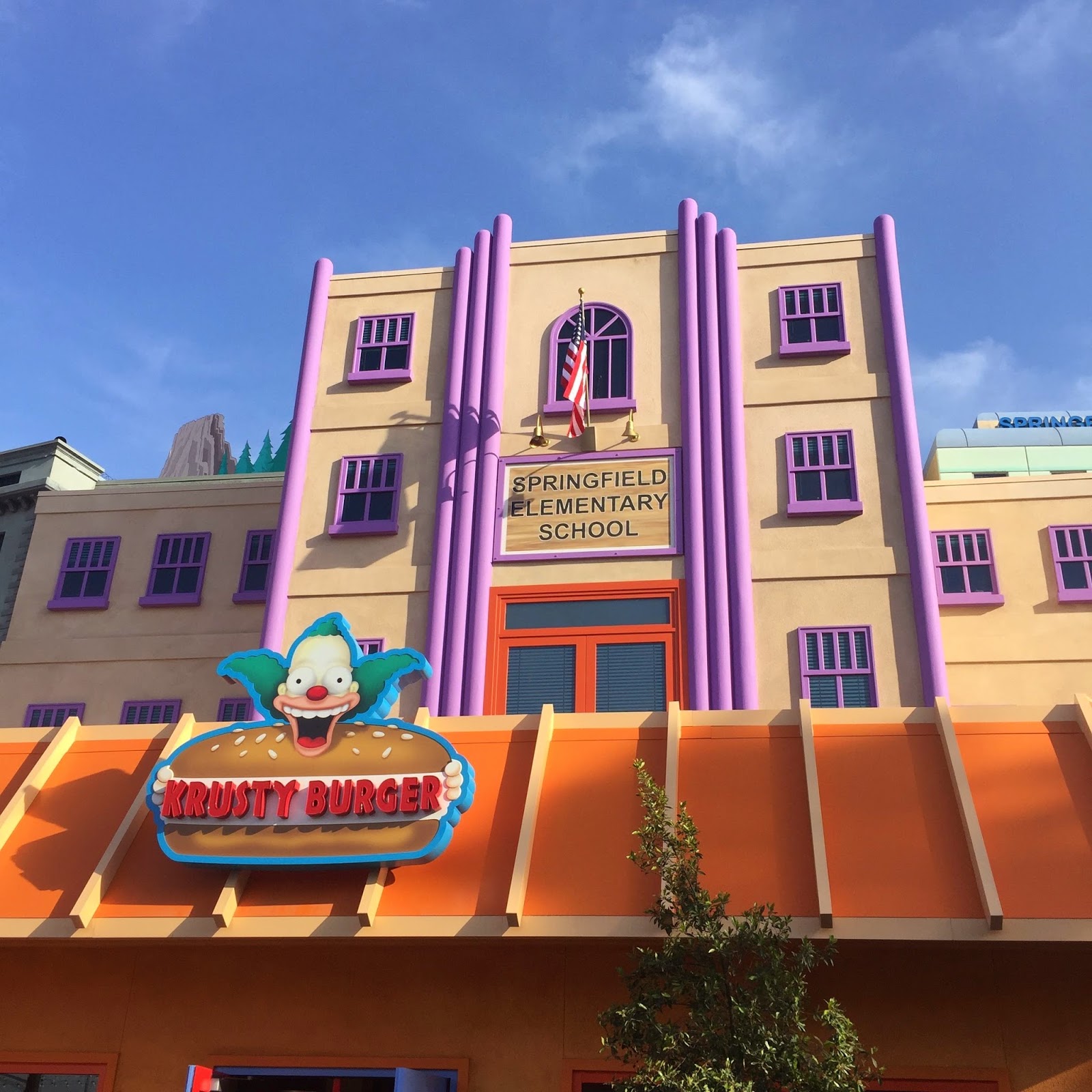 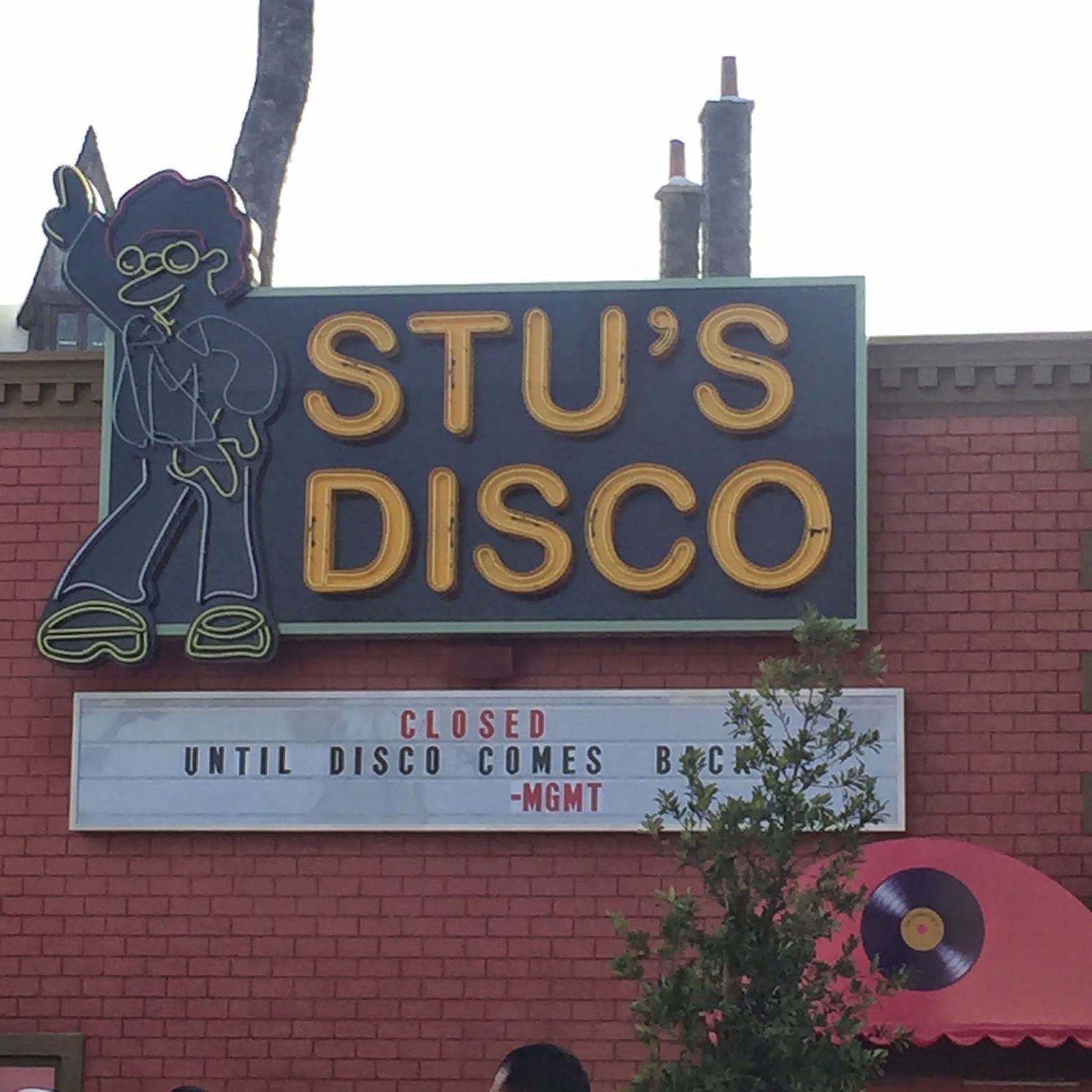 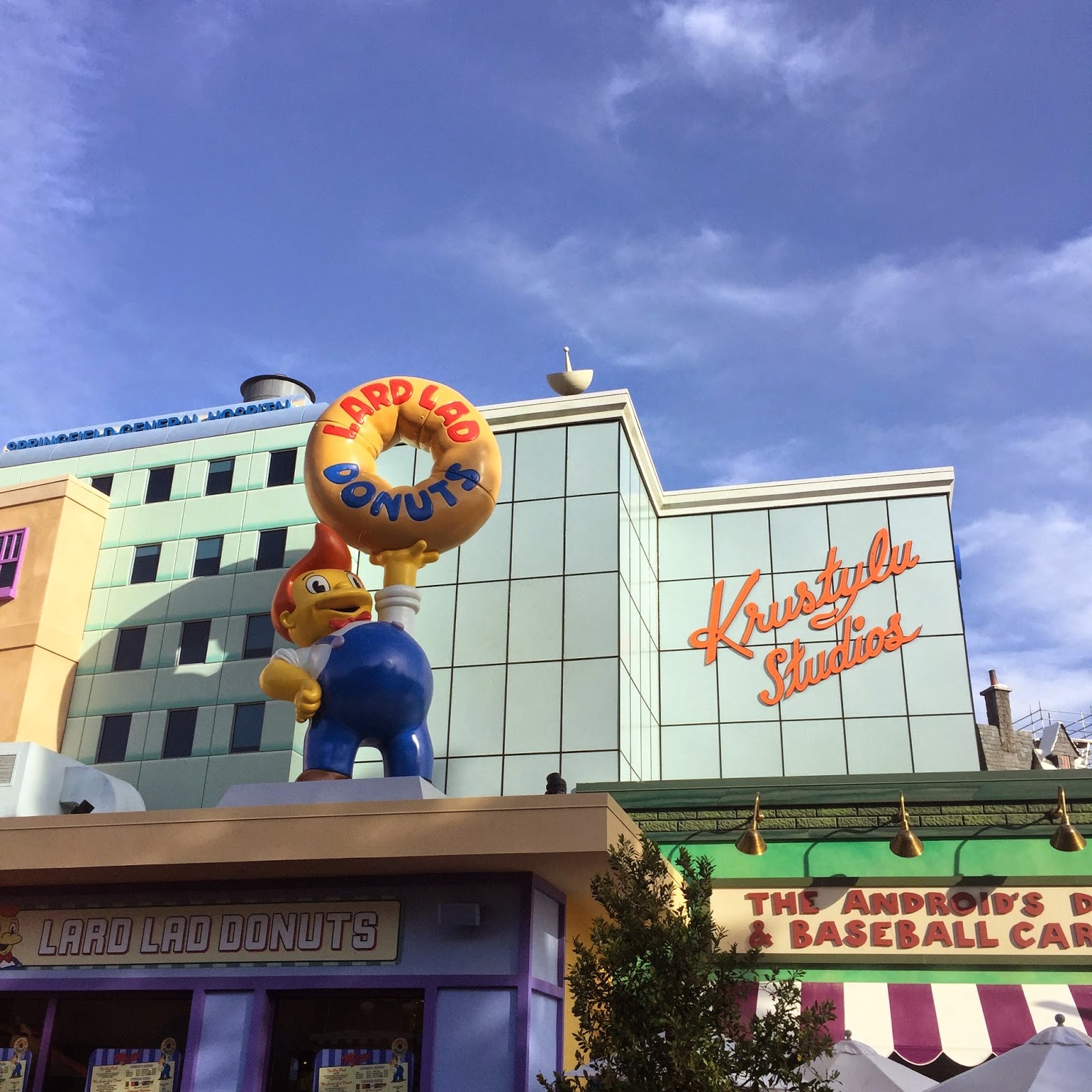 and there's been lots of progress on the harry potter area that's opening sometime in 2016.  this does absolutely nothing for me as i've never been able to get into the books nor the movies, but it looks cool nonetheless. 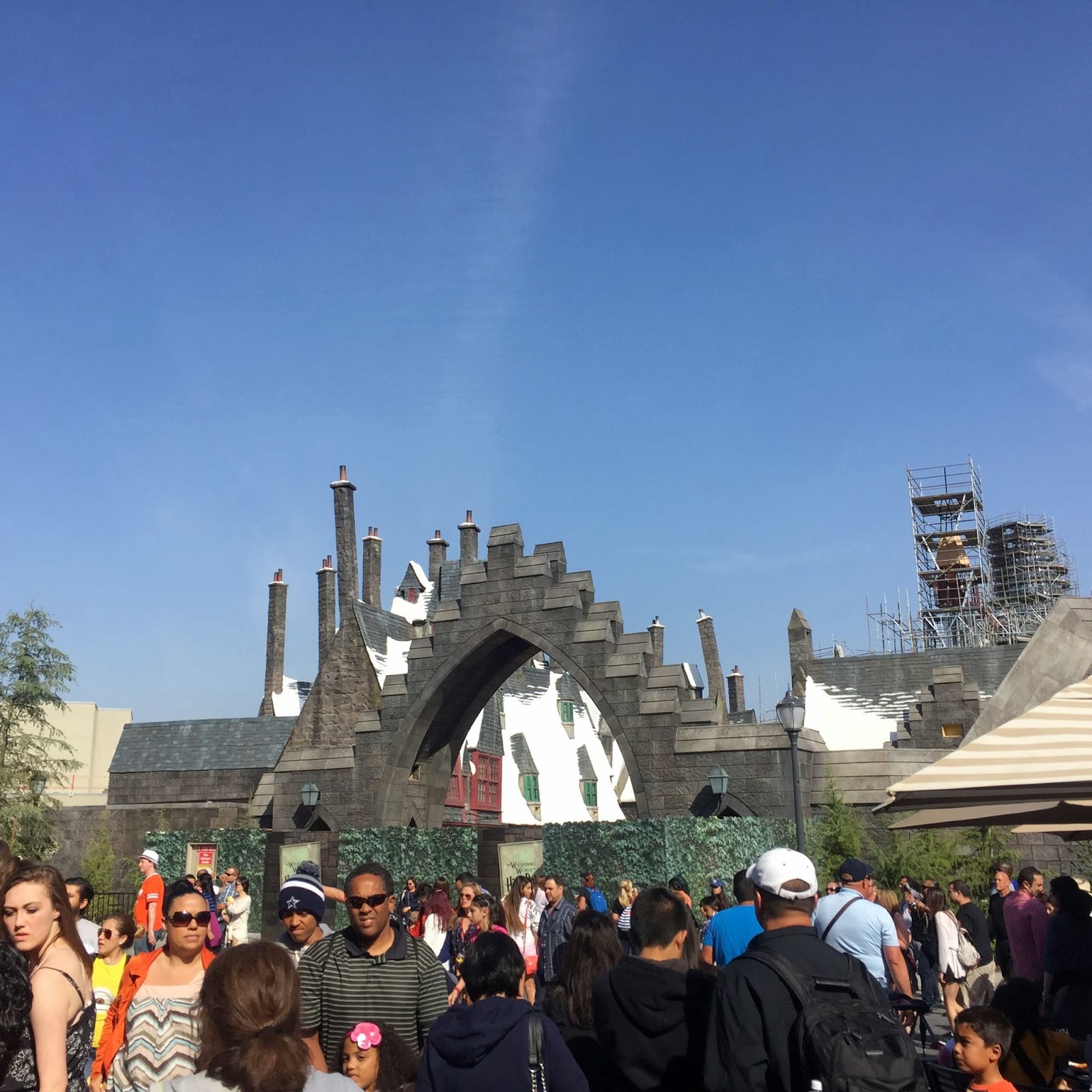 this sign in the waiting area for the simpsons ride always makes me smile. 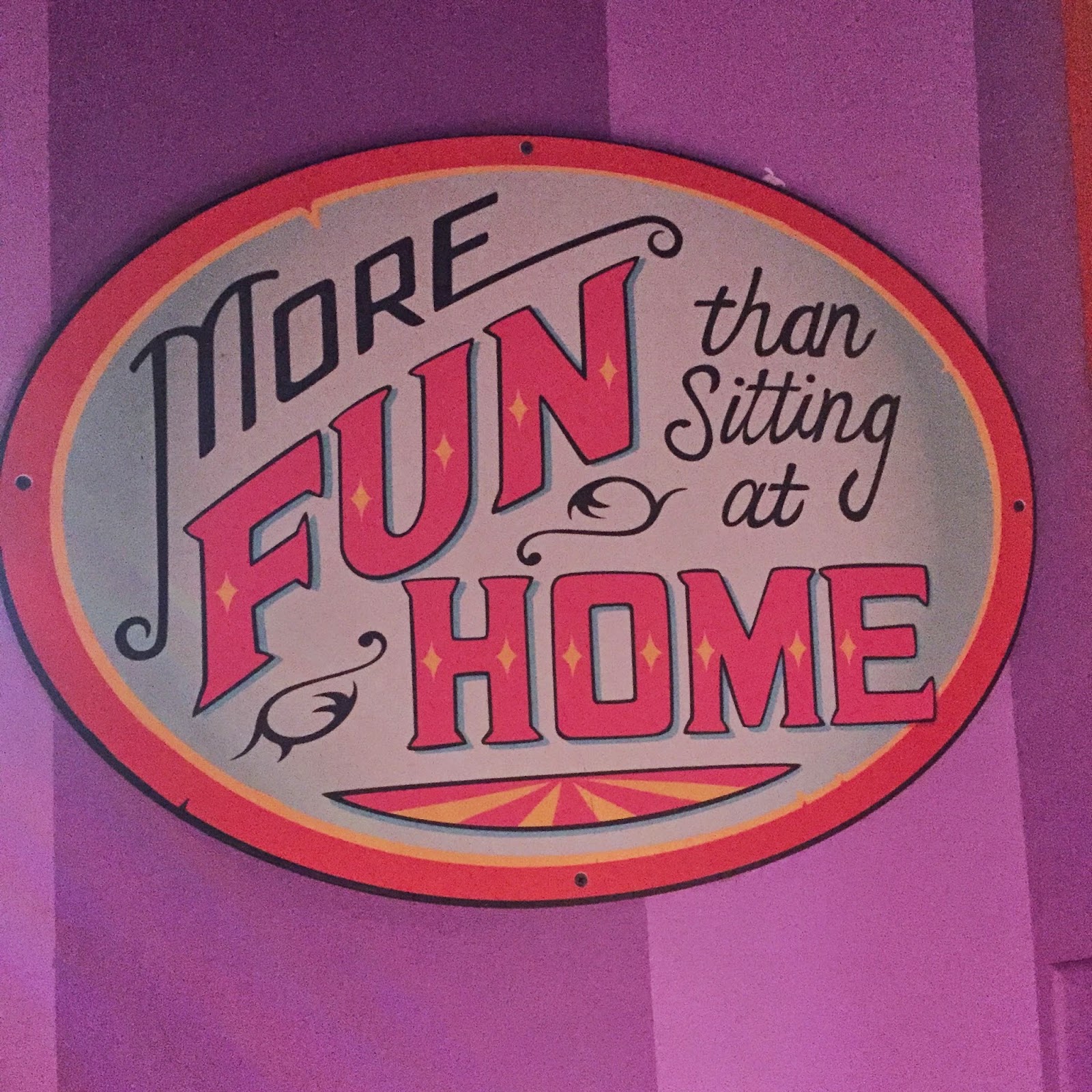 we did a little carb loading before heading to our final ride of the day. 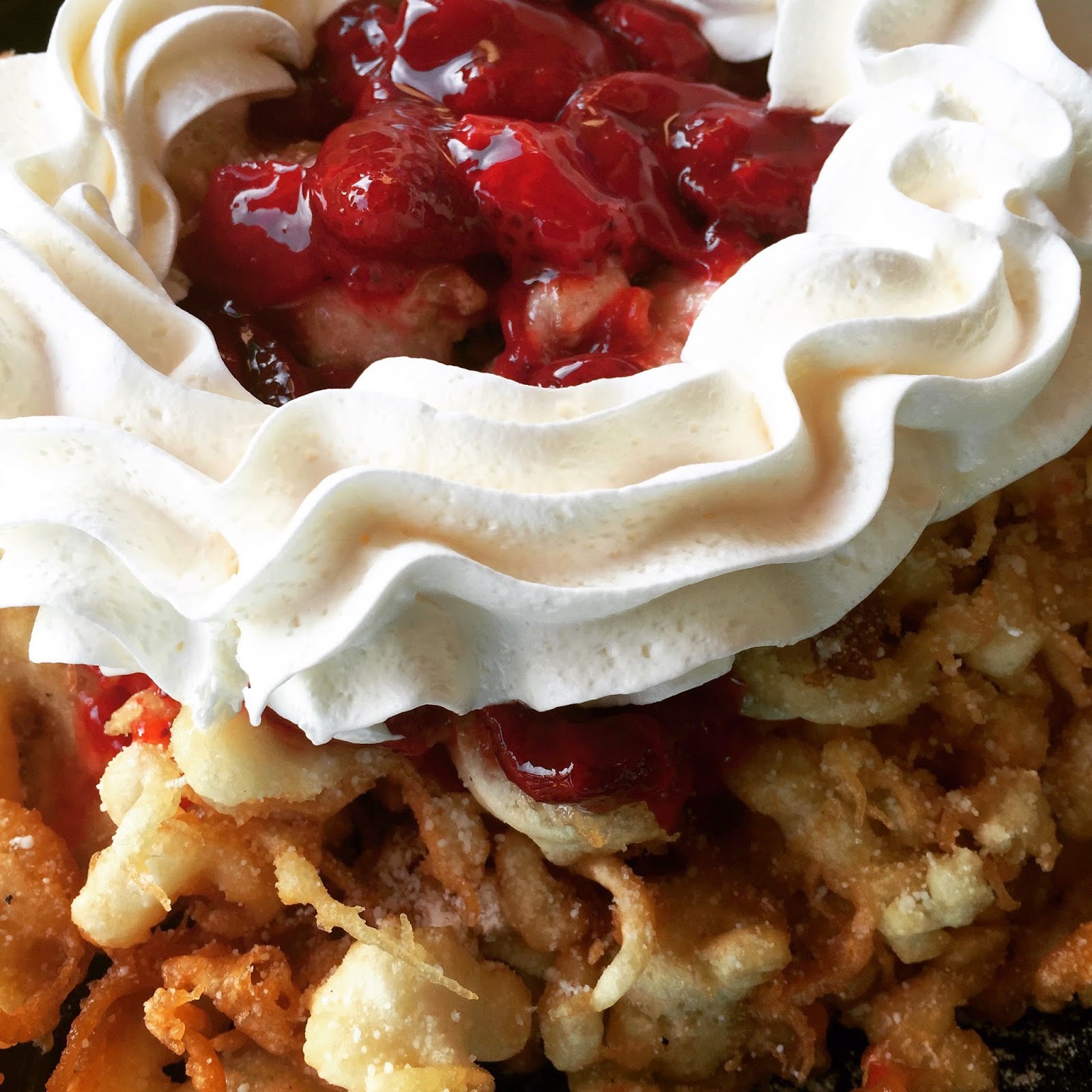 somehow, the teen had talked her sister into trying the transformers ride, which i'd also not yet experienced.  she assured us both that it was really fun and not scary at all, and while i was pretty easy to convince, the bean was a little leery.  but since she's been so open to trying new things lately, which is awesome, she put her game face on and we got in line.

it was here that we were treated to another round of "parents, teach your kids some fucking manners," which came with a pre-show of "why are people so damn rude?"  there was a woman in front of us in line, who was eventually joined by the rest of her family.  her son, who looked to be about 14 or 15 or so, came barreling through without a single "excuse me," and smacked the bean right in the face with the giant backpack he was wearing.  i hadn't seen it happen, but the teen had been watching like a hawk and said something to the kid - nothing particularly hostile, but more like "all you had to say was 'excuse me,' you know."  he just stared at her with a blank look on his face and she explained that he had hit the bean with his backpack.  it didn't seem to bother him a bit, and he turned around without a single word or apology.  ugh.

and then we noticed the woman glaring at us and speaking rather angrily to her companions in spanish.  the teen's stepmother and family are mexican, and so over the years of family gatherings the teen has picked up a decent understanding of español.  she asked the woman if there was a problem, and she mumbled something back about "i don't understand what's the problem, the backpack, it does not have eyes."

oh, that set the teen OFF.  she's already got zero tolerance for anything happening to her sister, and when you add in stupidity and blatant rudeness like that, it can get ugly.  they exchanged a few more words, i may have thrown in a few myself, and then the man in the group said "okay, we're sorry, we're sorry."  UGH X 2.

it sucked to be stuck in line behind this group for the half hour it took to get to the ride.  the teen was seething with anger, the woman continued to shoot her stupid mad face at us, while backpack boy cowered in a corner and the bean went along her merry way.  i was relieved when the line finally split in two, and we made sure to get in the one that they weren't in.

at least there was a happy ending, as the ride was really fun.  the bean loved it and wanted to go again right away, but with an early morning and a long run ahead of me i talked her into waiting till we returned for another visit.  she passed out on the way home, and that was that.

Email ThisBlogThis!Share to TwitterShare to FacebookShare to Pinterest
Labels: hollywood half, universal studios, why you gotta be so rude