come on, big money, NO WHAMMIES!

back when we did the cinderella outing with the girl scouts, my co-leader and i had some time to sit and chat while on the train to union station.  we got onto the topic of game shows, and both said that we had tried out for various shows in the past.  when i was little, my parents took me to audition for a kids' version of an old show called "joker's wild."  later, i went to a tryout for "wheel of fortune" when they were casting for soap opera week.  and then my third strikeout was with the teen's dad, for a show i know we would have kicked ass at - "supermarket sweep."  she'd tried out for a few others, but had actually made it onto "let's make a deal" and won a washer and dryer.  luuuuuucky.

and so a couple of weeks later, when she texted me to ask if i was interested in teaming up with her to try out for a game show...well, duh.  she signed us both up and forwarded the email confirmation to me that very day.  we decided to go in our matching blinged-out troop leader t-shirts and headed out to burbank to see if we could go and impress some producers.

the audition was right across the street from the nickelodeon studios. 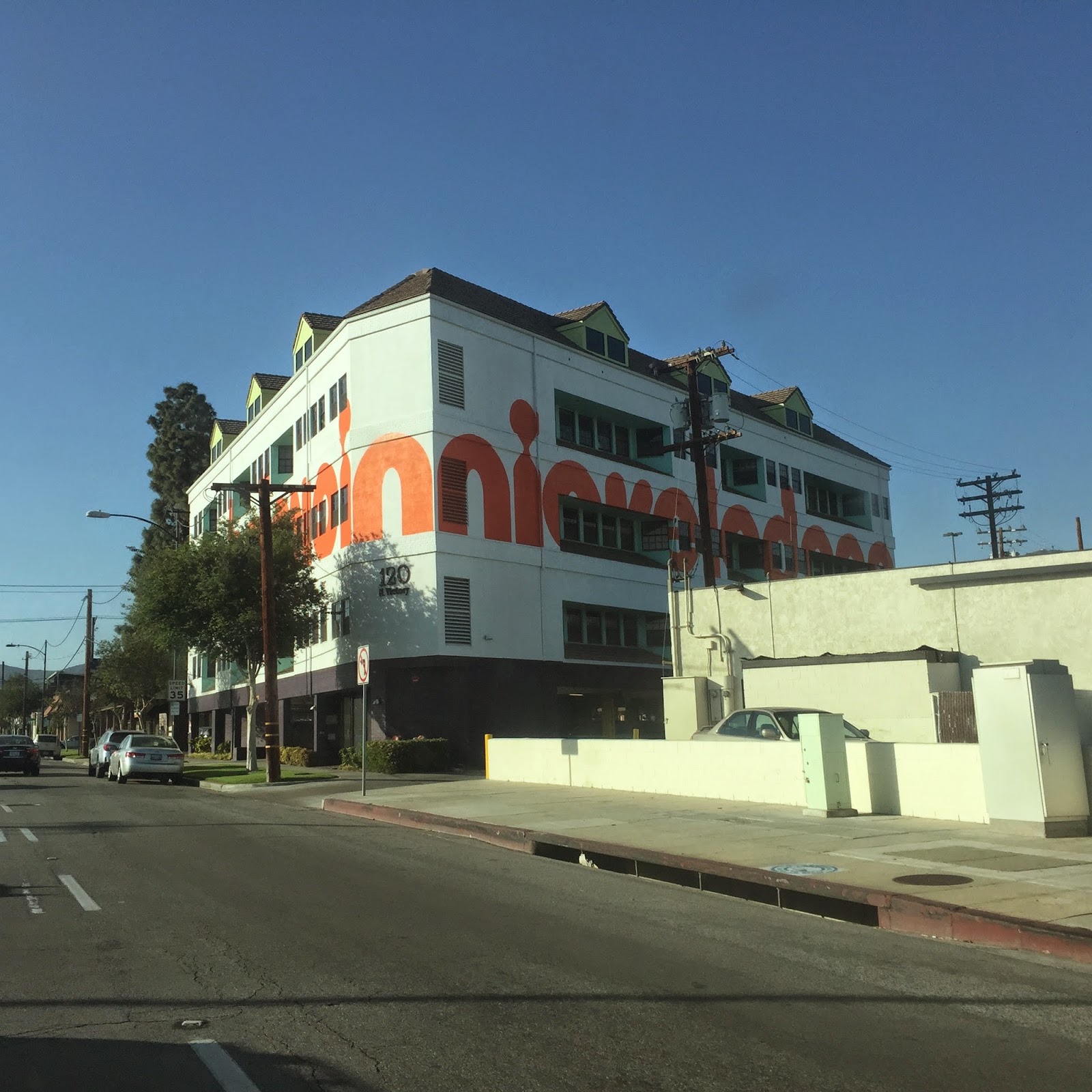 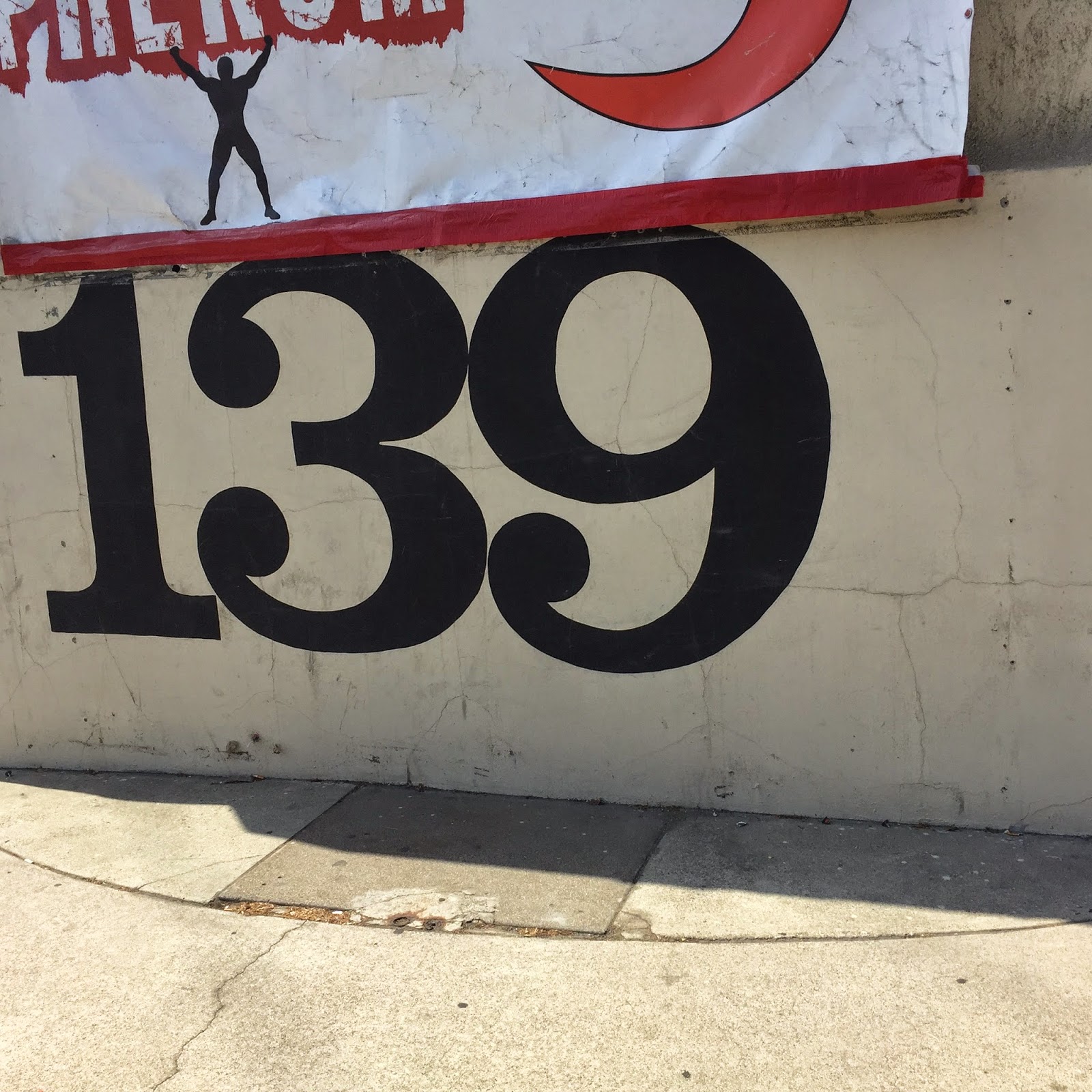 and we parked right in front of an elementary school bearing a very familiar name: 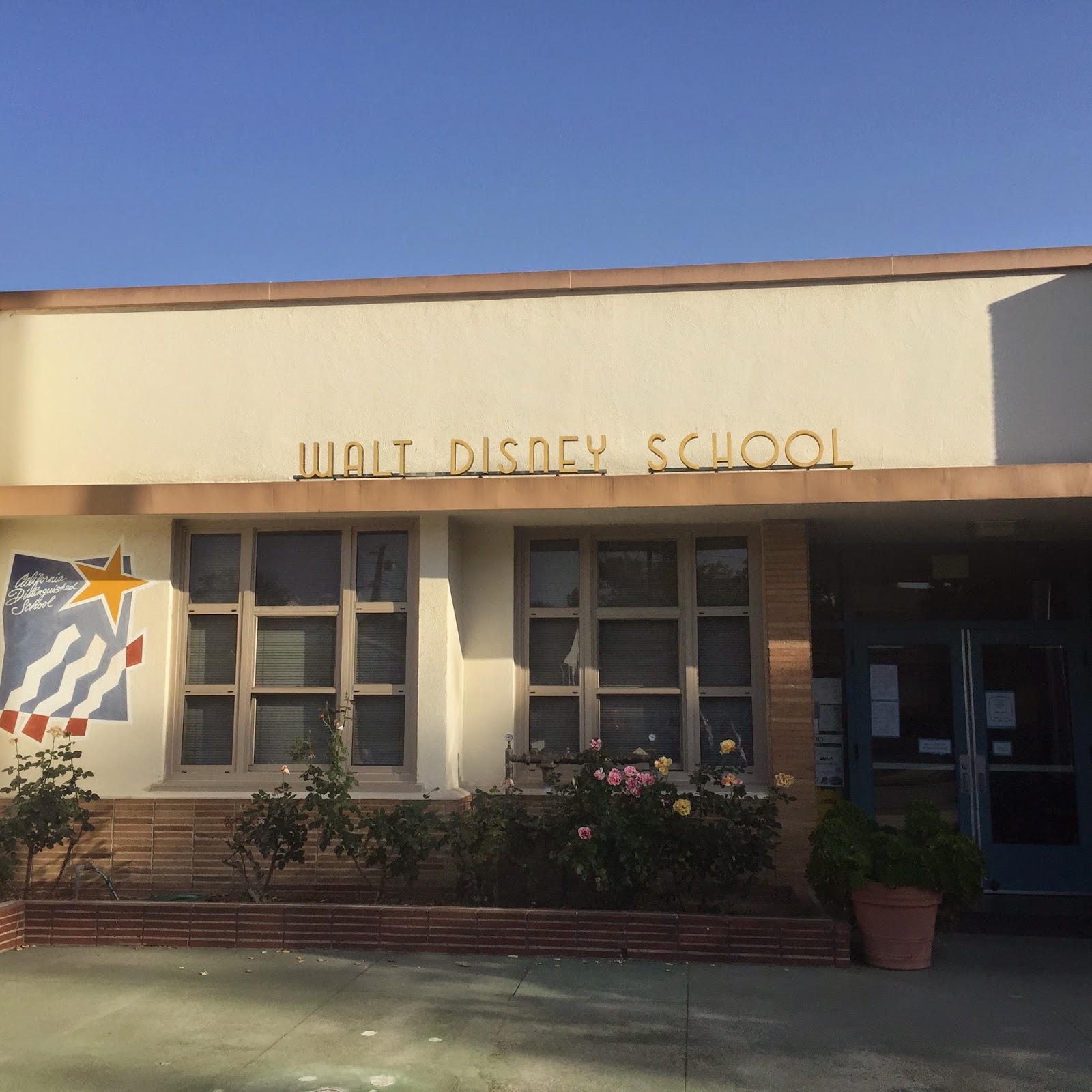 upon check-in, the staffer took some basic contact information from us and then snapped a quick headshot with her iPad.  we joined a growing line of excited pairs of hopeful game show contestants and then listened to another staffer as she explained what would be happening over the next hour or so.  the first hurdle was going into the building, meeting briefly with a show producer, introducing ourselves and telling the producer something super duper interesting about ourselves.  that would be the first cut, and i realized i had nothing to share.  i didn't have any idea what i was going to say, but i knew i could at least bring in a ton of energy and enthusiasm.  my co-leader and i are both ex-cheerleaders, so we knew we had that going for us at the very least.  heh.

my worries were unfounded when the producer took one look at our t-shirts and grinned.  "girl scout troop leaders, huh?  that sounds like fun."  and it just flowed easily from there.  phew.  we were stoked when we were instructed to go into the next room - which meant we'd cleared the first hurdle.  yay!

next, we sat down in a room lined with chairs and several tv monitors.  this is the only picture i snapped in there, because 1. i was nervous as hell, 2. i wasn't sure if i was allowed to take any at all, and 3. i was silently freaking out, wondering what was going to happen next. 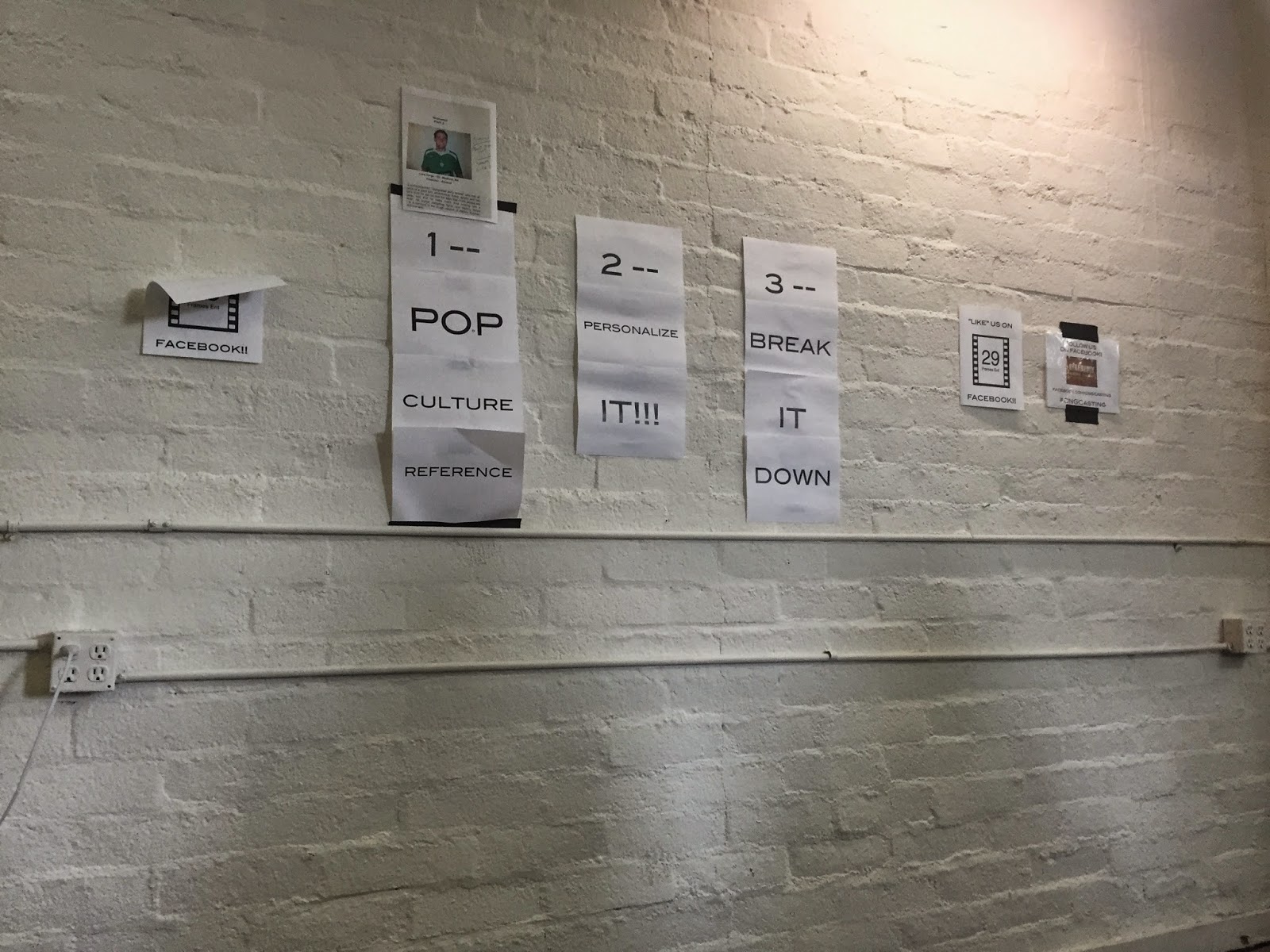 the staffer who'd explained what to expect came back and started rearranging everyone.  we ended up sitting in the very last row, which was okay with me.  this meant we'd get to watch the others do whatever it was that we were going to be doing (and maybe learning what NOT to do).

but first, we were instructed to reach underneath our chairs and pull out clipboards to fill out a quick information form.  when we were done with that, we were given a quick pop culture quiz.  this was fun for me, and i was fairly confident that i'd gotten most of them right.  i can't remember the questions now, but i do know i wrote down answers such as joseph gordon-levitt, jack nicklaus, carmen electra, and j.d. salinger.  my confidence level went up a couple of notches after that part.

next, she started calling teams up to do a mock version of the show.  one person would be the clue giver and stand in front of a monitor that displayed the answers, and their partner would face them and try to guess what they were describing.  pretty standard game show fare, i'd say.

after each row was done, they would hear their fate - be released to go home or make an appointment for a callback.  this group casts for several different game and reality shows, so we were assured that even if we were sent home, our information would be reviewed for possible opportunities on other shows.  well, okay then.

by the time our turn came, the room was almost empty.  this made it a little easier for me, although in the back of my mind i was thinking about how i was going to handle it if we actually made it to a taping.  yikes.  and i thought we did well, jumping up and down, screaming, cheering, generally making a spectacle of ourselves while managing to guess each other's clues fairly easily.  and so we sat down and waited for the rest of the teams in our row to be done.

i'll give you one clue to guess what happened next: 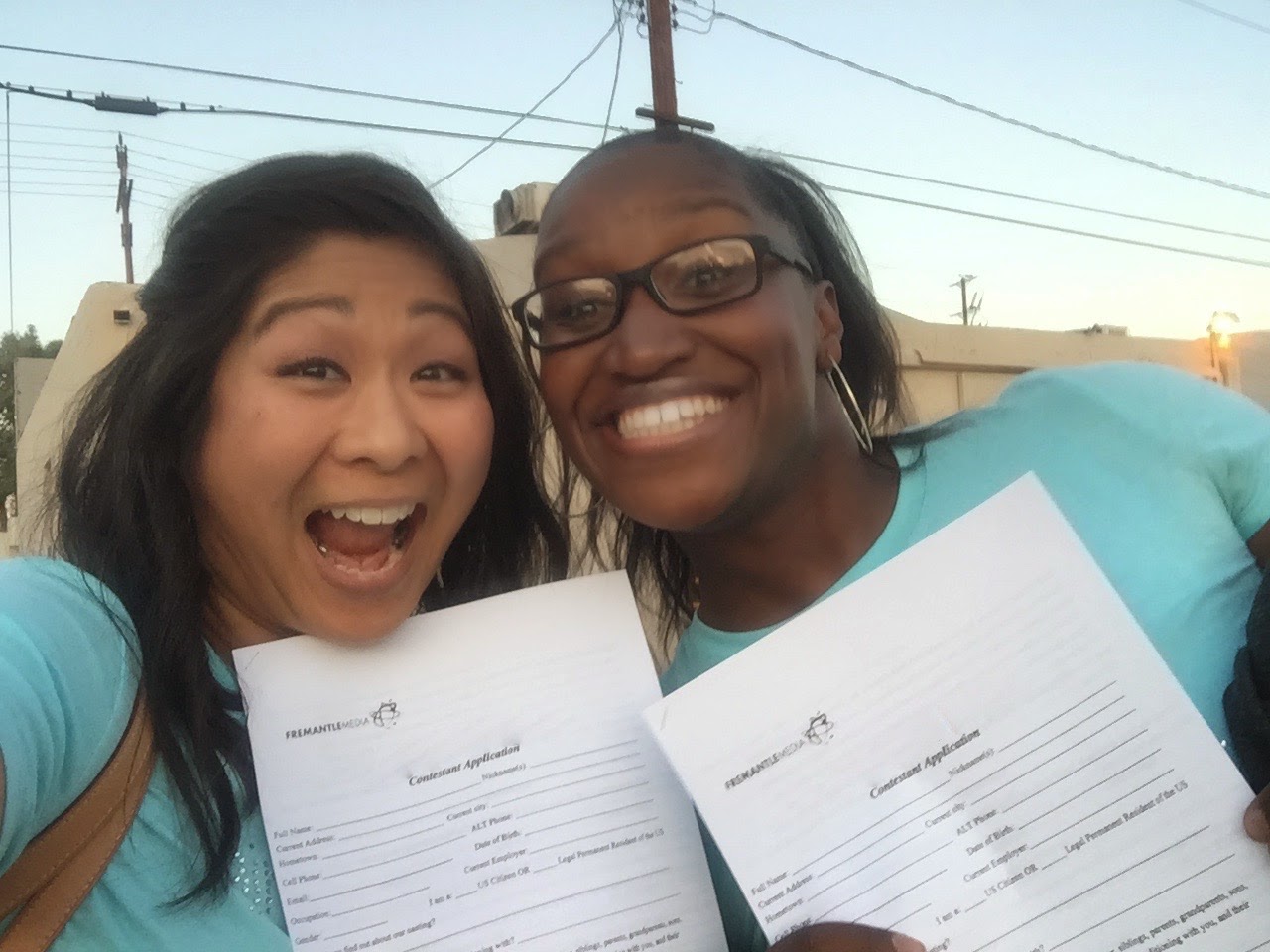 that was a fairly lengthly questionnaire packet that asked all sorts of questions and contained a similarly long confidentiality agreement for us to complete and sign.  i, of course, waited until the morning of our callback to sit down and get through it all. 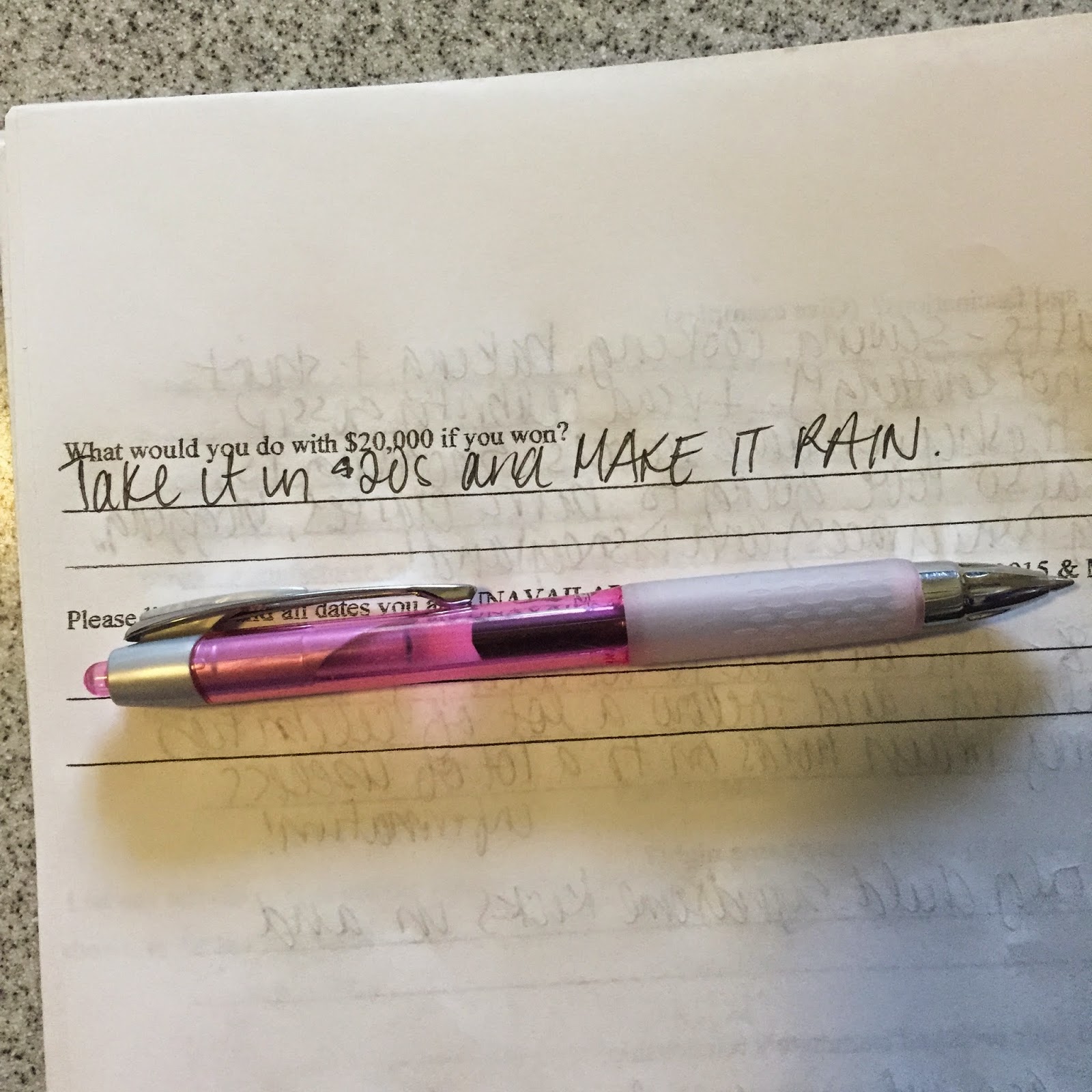 we had no idea what to expect for the callback.  when we arrived, the room was empty save for one team and two show staffers.  this time, we took a headshot together and then were instructed to "practice" the game using an app called "heads up."  neither of us had the app, so i sat down to download it.  except that by the time it was installed on my phone, we were being called in, and so we didn't get to practice even for a minute.  oh well.

the staffer led us into a small room with a purple backdrop, lots of lights and a camera.  we put on little clip-on microphones, stood in front of the camera, and got right to it.  she asked us to introduce ourselves and then explain how we knew each other.  she asked us a few questions about being girl scout troop leaders, what kinds of things we did with the girls, what we ourselves got out of the experience.  she'd instructed us to show a ton of energy and excitement, and so we were jumping up and down and flailing arms all around, pretty much like the crazies you see on shows like "the price is right."  then she had us play the game again, taking turns giving clues and guessing, and then she had us work as a team to guess from clues she gave to us both - kind of like a lightning round.

you guys, we rocked that callback.  she said that we'd did an awesome job (although hopefully she doesn't say that to everyone, amirite), told us that if we were chosen we could expect a call in may, and sent us on our merry way.  the whole thing had taken half an hour, and we were excited and on a crazy adrenaline rush the whole way home.  although we did make one stop, because we were there and why not? 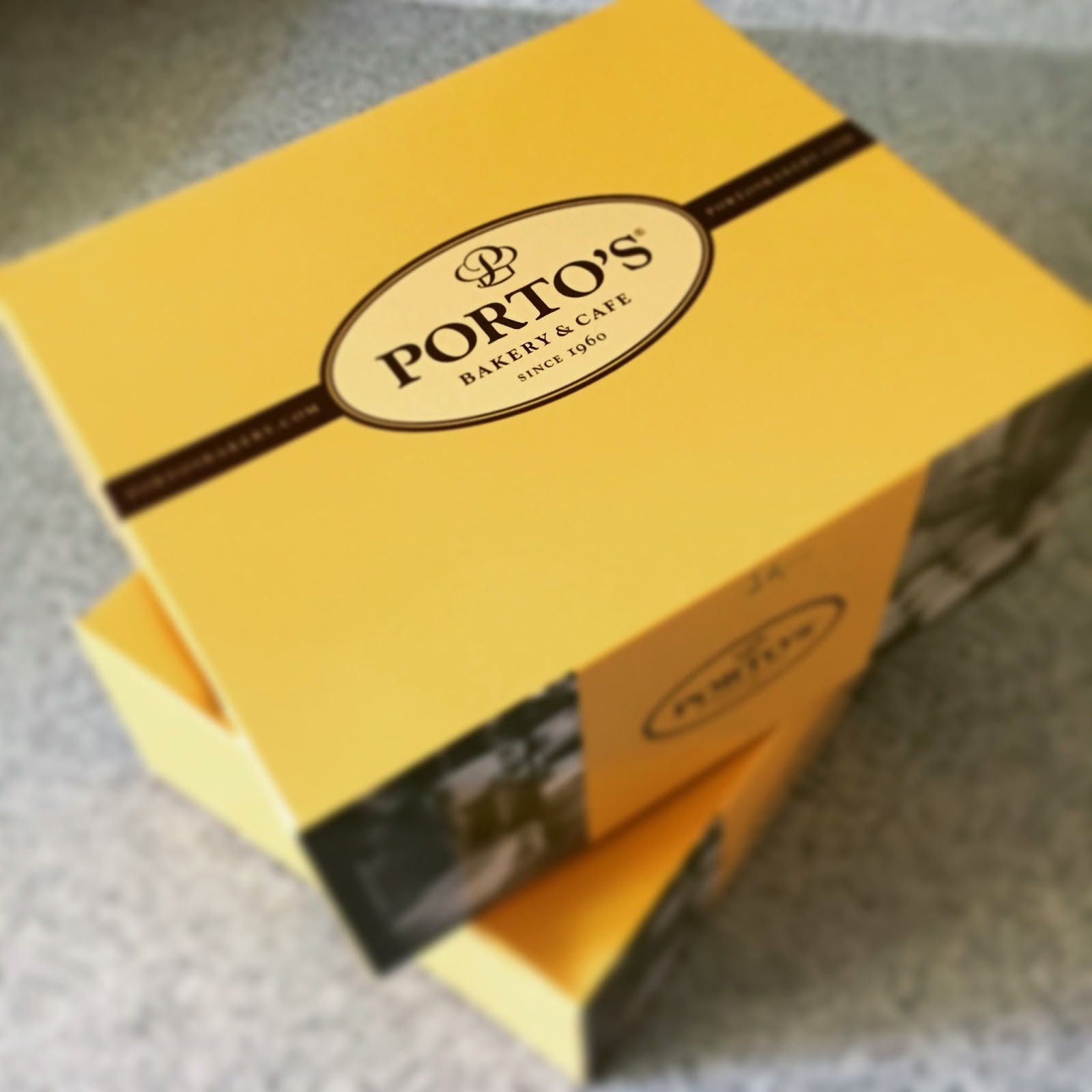 i mean, what better way to celebrate a successful game show audition than with cheese rolls, potato balls and a cuban sandwich from porto's? 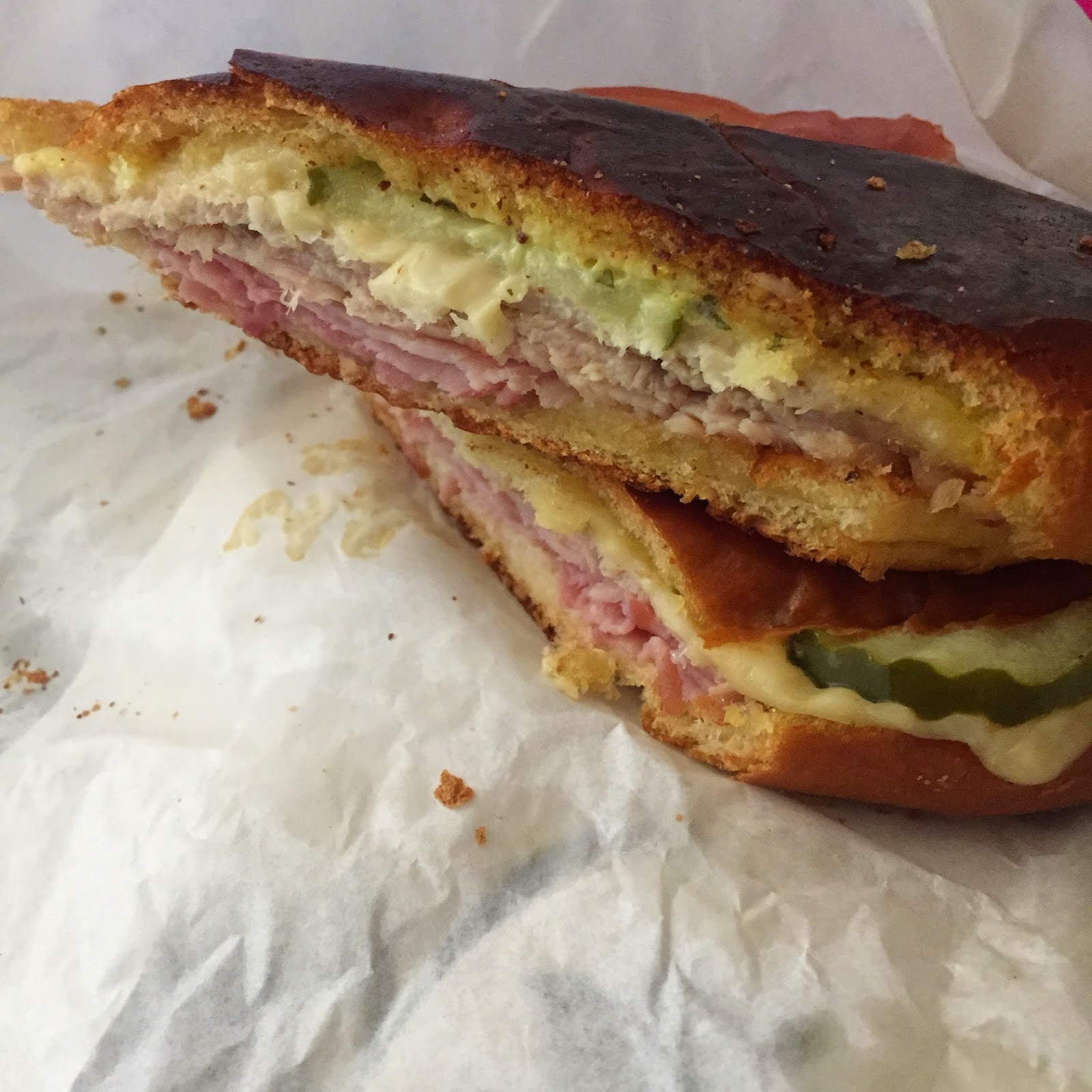 and so now we wait.  we felt really confident about it, and hopefully we'll get that call.  i may have dropped enough clues throughout this post to tell you which show we were going for, but i'm not 100% sure if i can confirm yet - we'll have to wait until we either hear from them...or not.

Email ThisBlogThis!Share to TwitterShare to FacebookShare to Pinterest
Labels: game shows are fun